As Temperatures drop, and the first real winter frost sets in.
Bird activity around the pear tree seems more manic.

House sparrows feeding on the fat balls around the garden are pushed off by the more aggressive Starlings,

Blue tits and the occasional Great Tit have been seen feeding hesitantly on the feeders when the opportunity arises.

While the Robin and Blackbird skulk around the shrubs, darting out to take advantage of the food dropping from the feeders above.

Collared dove and the occasional Wood Pigeon seen most days. 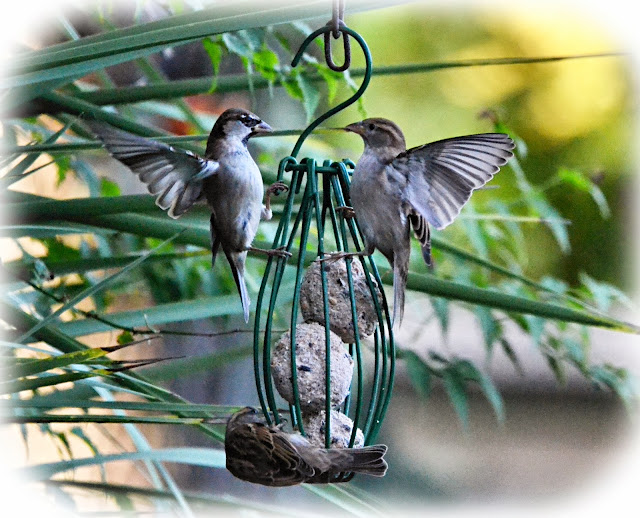 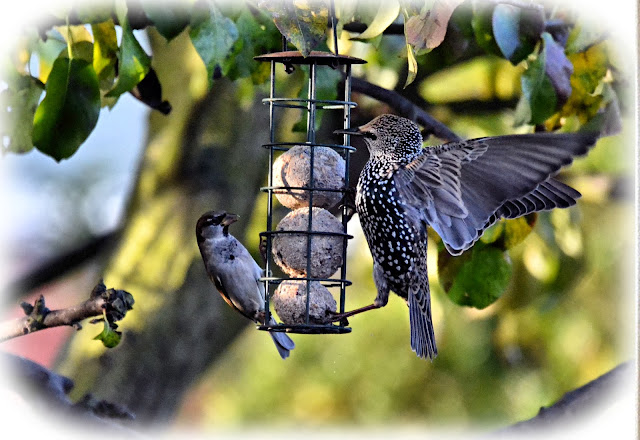 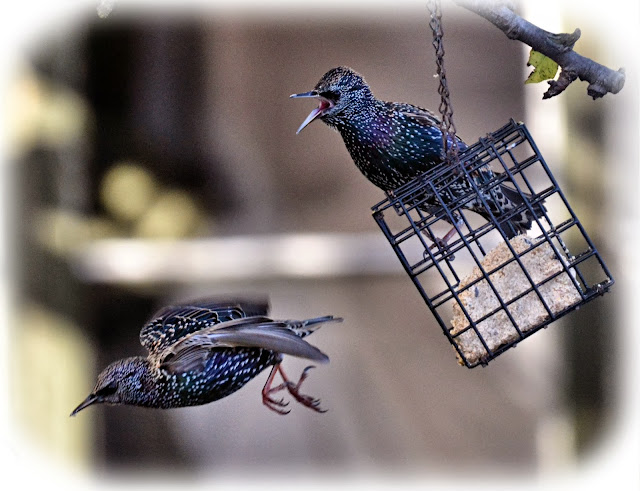 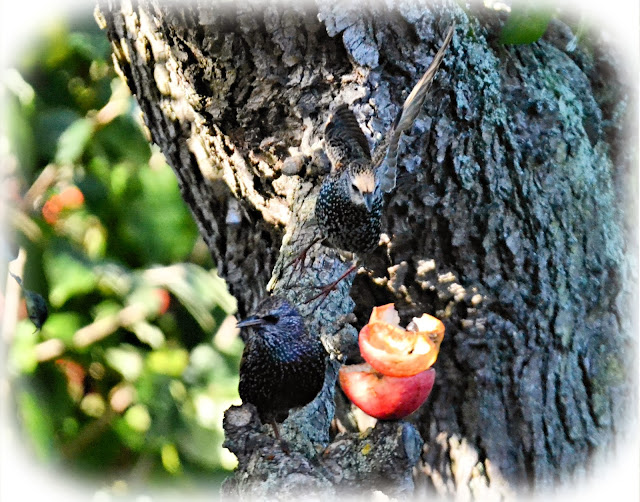 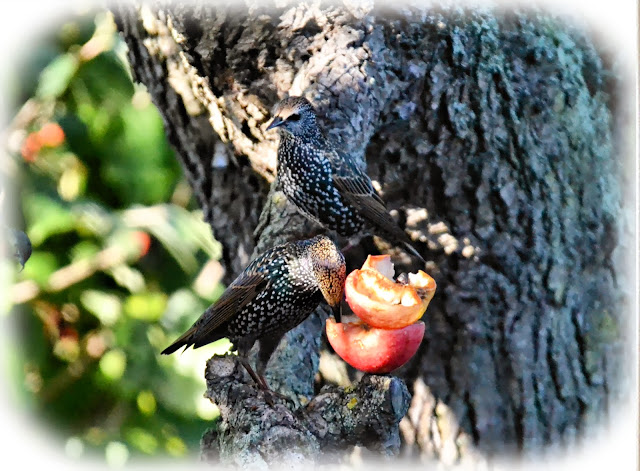 New visitors recently, have been this juvenile Chaffinch feeding on bird seed, and a Blackcap seen darting around the top of the Laurel Bush, feeding on the last remaining insects. 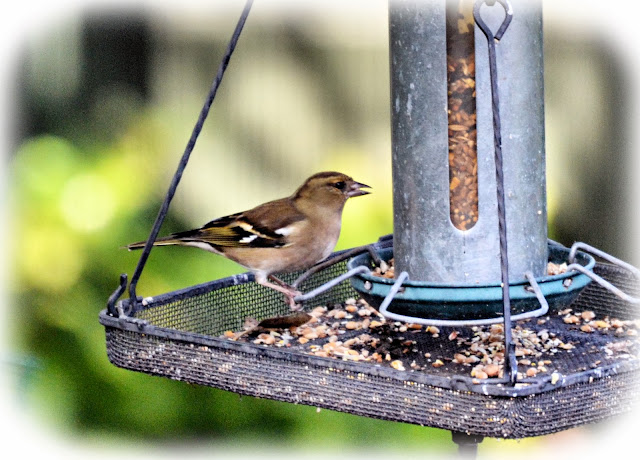 Seeing the Blackcap got me thinking about the "wintering Blackcaps" they seem to be more common these days, with most people reporting at least one Blackcap wintering in their gardens.

I always assumed that these were our breeding birds over-wintering, apparently not,

RSPB have estimated that there are probably up to three thousand Wintering Blackcaps in the UK.

Normally Blackcaps migrate to this country in the late spring to breed and then leave again in September returning to the Iberian peninsular and Western Africa.

It is has been proven by ringing recoveries that the Wintering Blackcaps we see in our gardens have probably bred or hatched in Southern Germany and North east Europe, moving south they have found it viable to winter in Britain due to  sufficient food being available, from either berries or from garden feeders.

These birds then have the  advantage of a shorter return trip to their breeding grounds.

These are some of the  Wintering Blackcaps recorded in the garden, back in January this Year 2013. 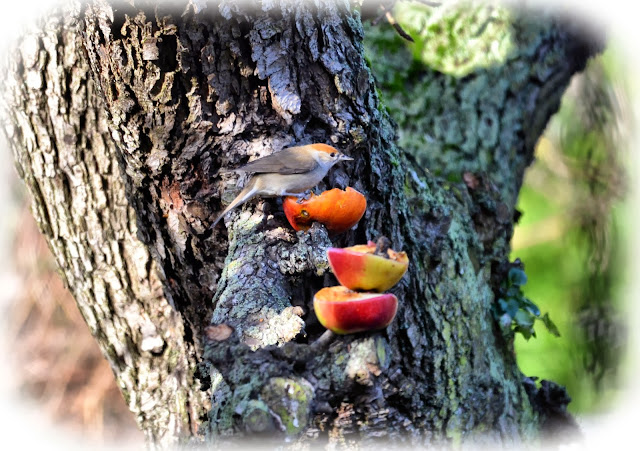 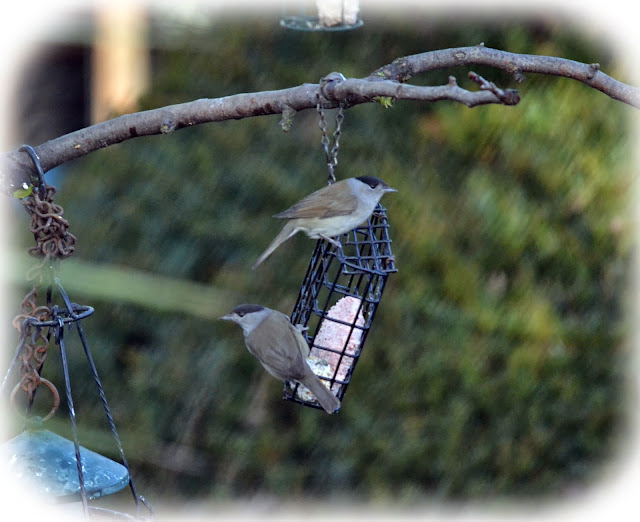 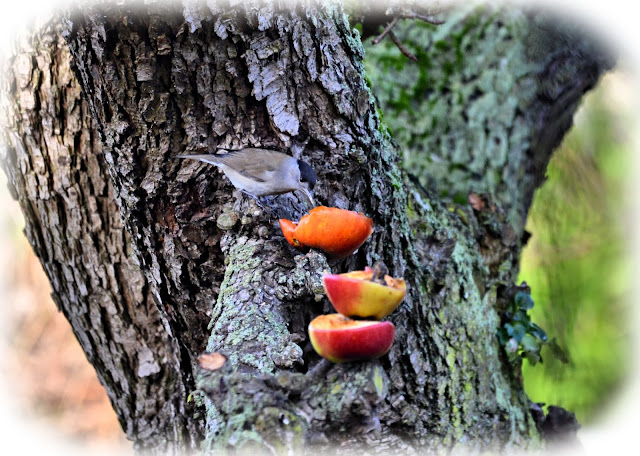 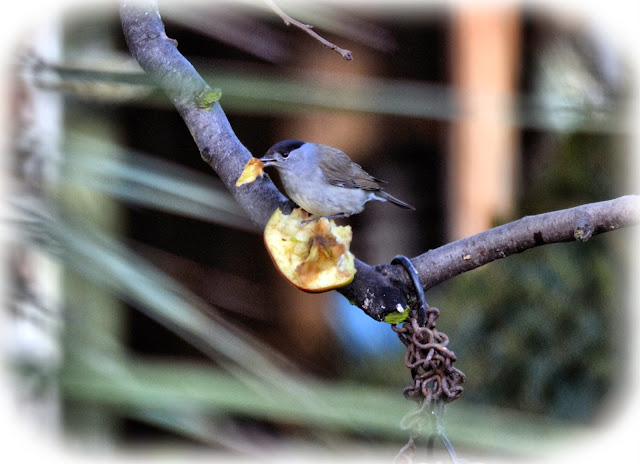 Thats at least two Males,  and one female.

Looking forward to this winter, and seeing more of these Warblers.
Posted by Merlin52 at 15:21 No comments:


After seeing the Glossy Ibis at Dungeness,  all be it distantly, thought  I would try and see the Stodmarsh Glossy Ibis which has been showing extremely well in front of the reed bed Hide.

Some of the local Stodmarsh  birders were showing some excellent photographs on their various blogs, would have loved to get a close photograph of the juvenile Glossy Ibis.

I left it for a few days to avoid  a crowded hide, not wanting to embarrass myself in the company of many seasoned photographers, being new to the game of photography.

The Ibis first reported on the 19th October remained until the morning of the 24th October, unfortunately missed it by a couple of hours.

The Ibis had been seen earlier in the morning but flew off  when the teal flock was spooked, its normal behavior was to  return within about 20 mins,  not this day,  a Glossy Ibis was later newly reported in East Sussex later that day, probably the Stodmarsh juvenile.

Not much else to see from the hide, Although I thought this Greylag  Goose posed nicely quite close and with a nice reflection. 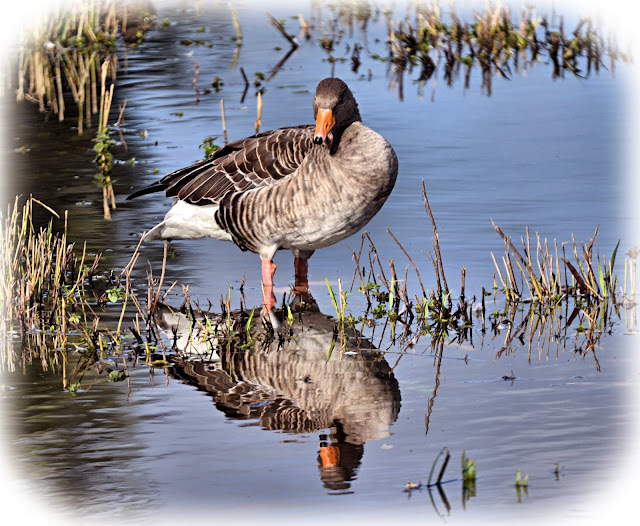 The Great Crested grebe moved into the pool in front of the hide again. 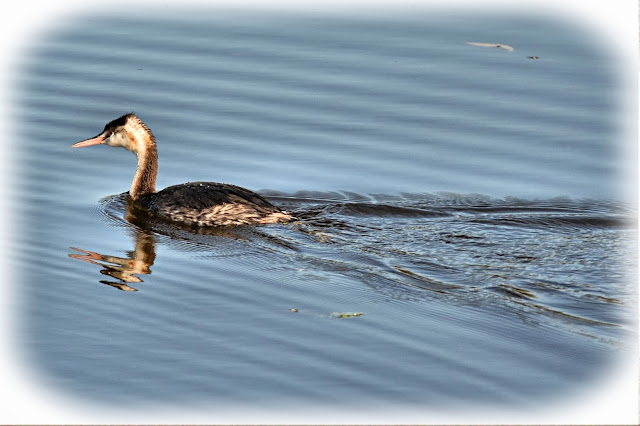 I moved on for a walk around the reserve, heading for Grove ferry end in the hope of a Bearded Tit or Kingfisher sighting. Not to much to be seen, a couple of Marsh Harriers and a Buzzard flying high over the reserve. 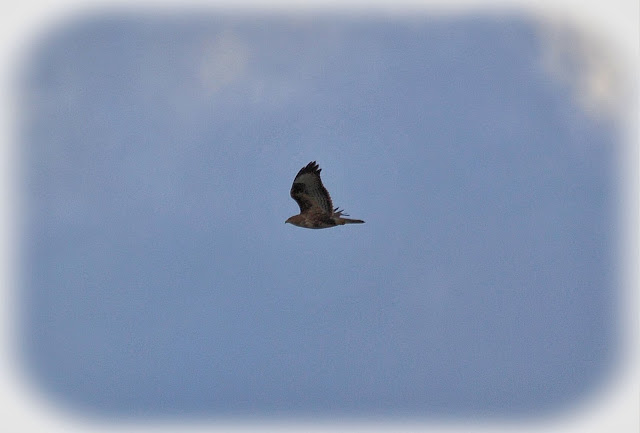 I called in at the Marsh hide, very quite in fact no birds on view at all.

On reaching the David Feast hide at Grove, plenty of dabblers in the form of Mallard, teal and Gadwall.
Some crazy antics from the Mallards as they paired up for the new breeding season. 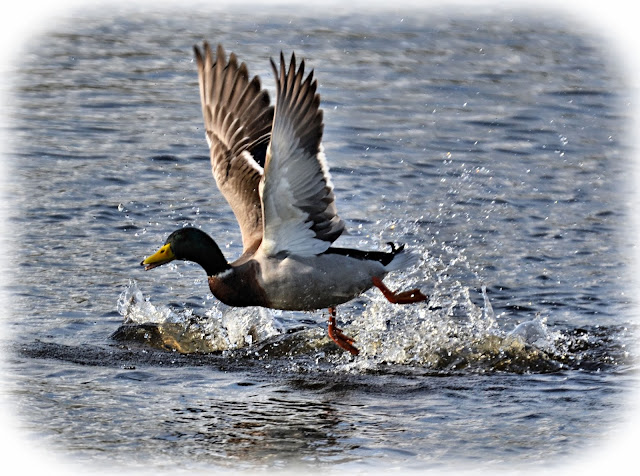 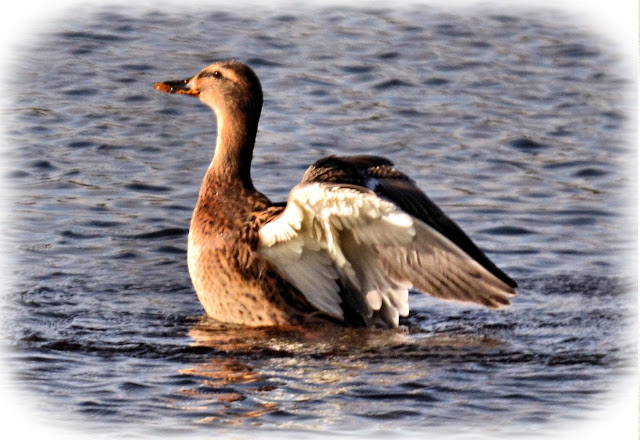 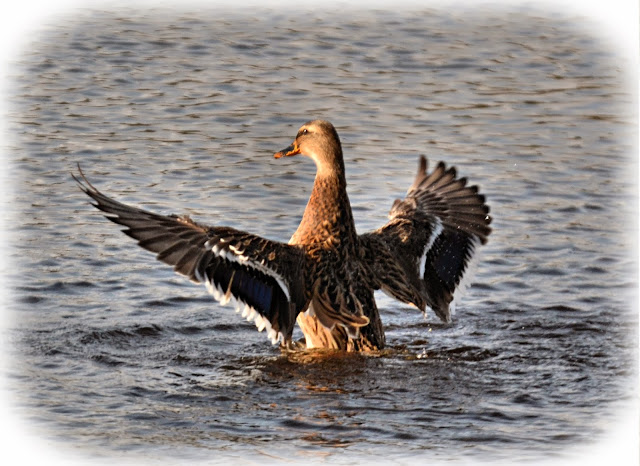 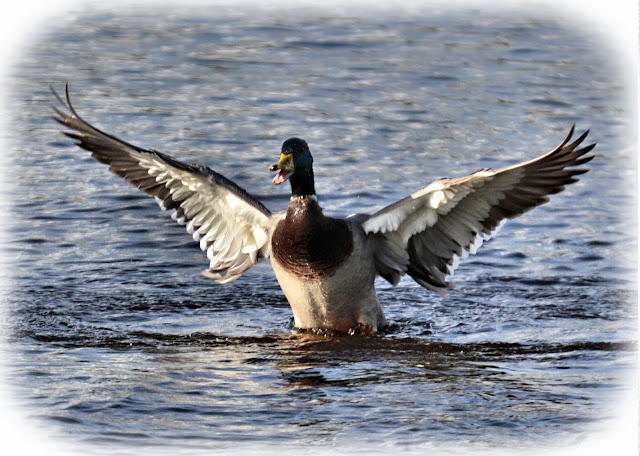 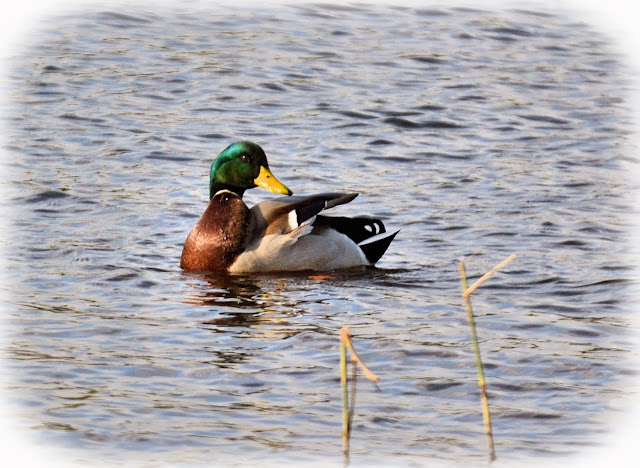 A couple of Gadwall drakes were trying to impress this female with some courtship display. 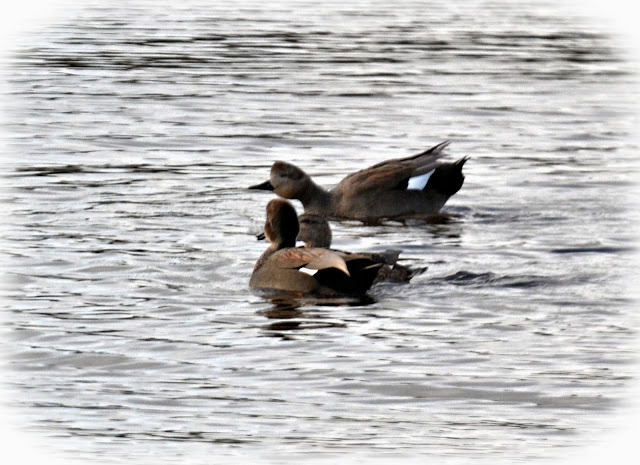 Not much else to photograph here, although a Little grebe put in an appearance, a few Lapwing and some Black Headed Gulls on the Rafts. 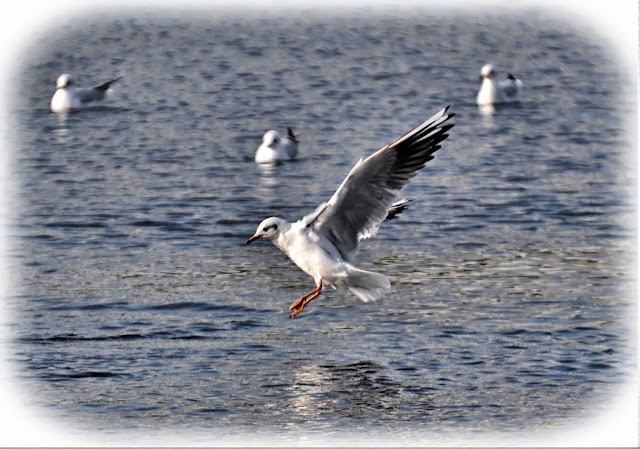 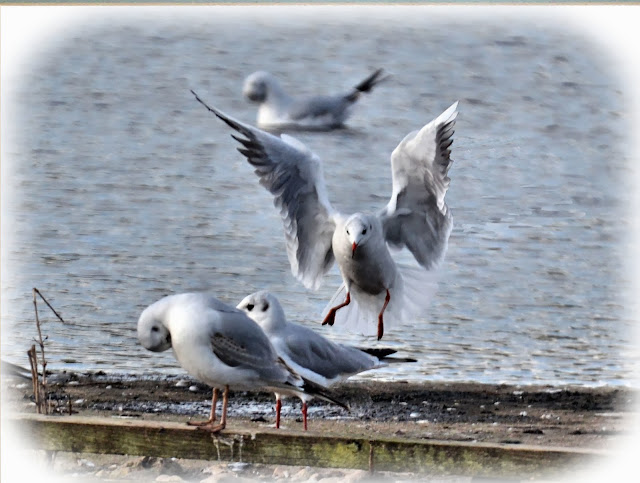 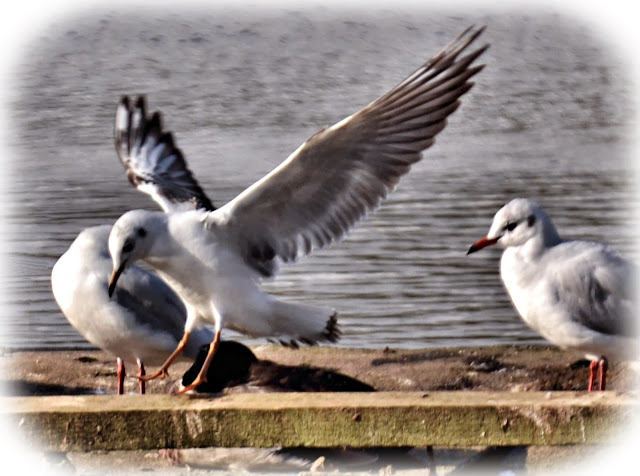 Still no Kingfisher or Bearded tits photographed yet.