Winter is coming to an end, and these last few weeks have been bitterly cold, as usual February has brought some snow albeit a very light dusting for us in the south of the country.
Noticeable for its absence this winter,  a male wintering Blackcap has finally showed up.
I placed a couple of apple halves out in the the garden the day before, and there it was feasting on the apple this morning in a small flurry of sleety snow. 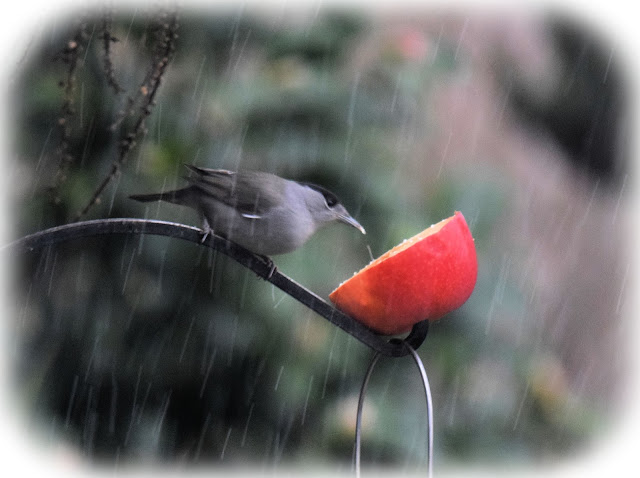 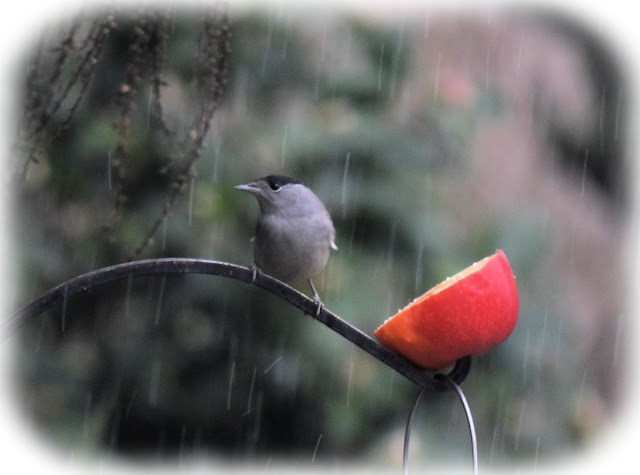 Thats three winters in a row now that at least one Blackcap has been in the garden, and I have read many other reports of Blackcap being seen.
It will not be for another month or so before Blackcaps start arriving in the country so these will have some advantage over those I expect, if they can manage to survive our winter, and it looks like there coping fine. 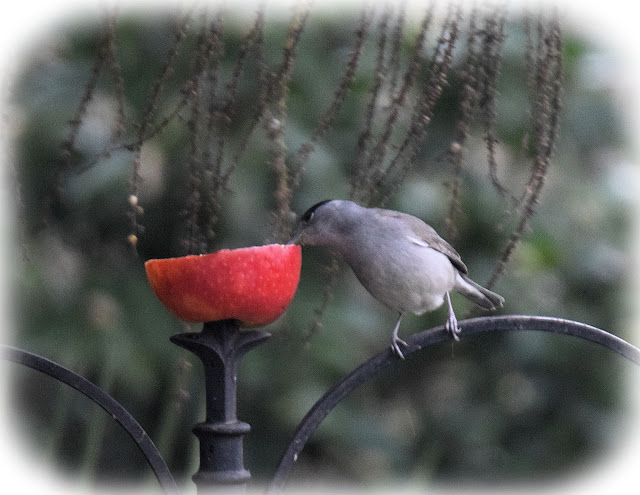 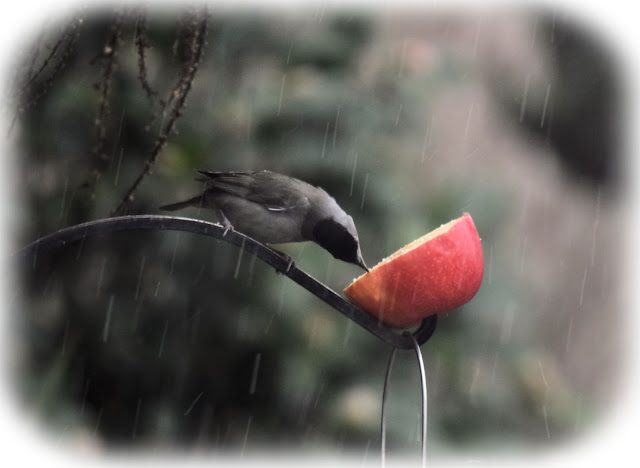 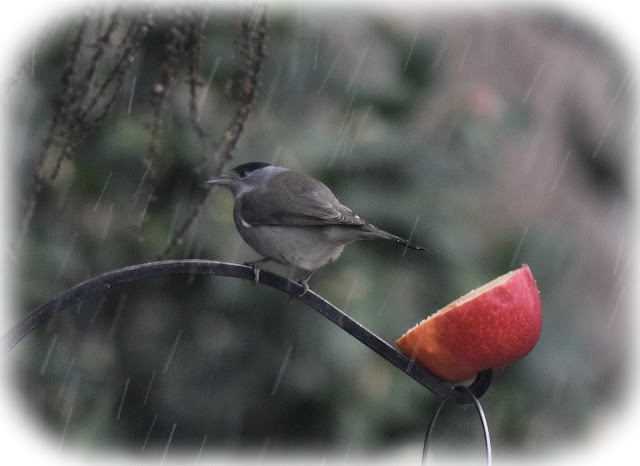 I look forward to there arrival and woodland song in my local woods
Posted by Merlin52 at 12:19 1 comment:

'Splattering' on the Marsh !

My intention today was to enjoy a walk around the marshes, find a quite hide and photograph some waterbirds and forget the woes of the world, Brexit and Donald  B***** Trump.
Unfortunately my solitude in the hide was to be rudely interrupted by a group of naturalists who wanted to discuss the woes of the world as they stomped around the hide.
Its usally at times like this I pack up my gear  and move on, but I decided to sit this one out, and wait for them to move on.
Especially as the Coots in front of the Hide were very agitated with each other, and the potential for some Coot action was on the cards.
Its at this time of the year Coots are beginning to pair up and become very territorial, strange when you think that they have spent most of the winter in large groups at peace with each other.
I have been trying to capture one of these territorial battles for some time now, but to no avail as yet.
I have learnt the various postures leading up to a territorial dispute, "Swanning" as shown below.

"Patrolling" and "Cruising" easy to spot this one, head and neck are lowered  down close to water surface and theirs a visible wake behind the coot as it approaches the intruder who has ventured to close to its territory.

This usally leads to the "Splatter", one Coot aggressively chasing another across the surface of the water, this usally ends with the intruding Coot retreating at speed in a "splatter" I managed to capture a few of these territorial "splattering" none of which ended up as a" territorial Battle" which is what I am ultimately after. 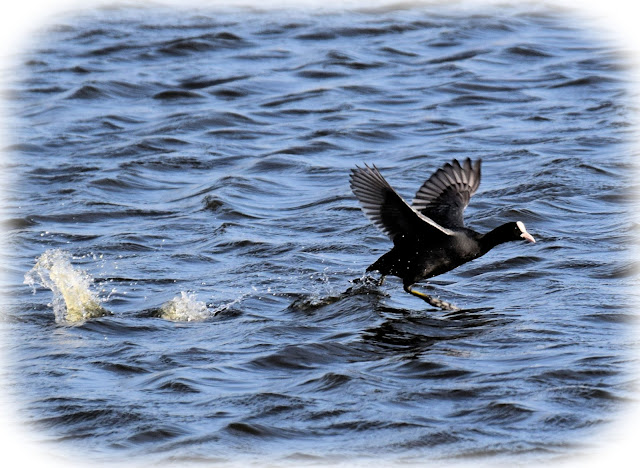 Hidden on the grassy islands in front of the hide were a few Snipe, Skylarks searching for seeds, three or four Pied Wagtails flew in for a wash and brush up and a brief sighting of a  distant Water Pipit. 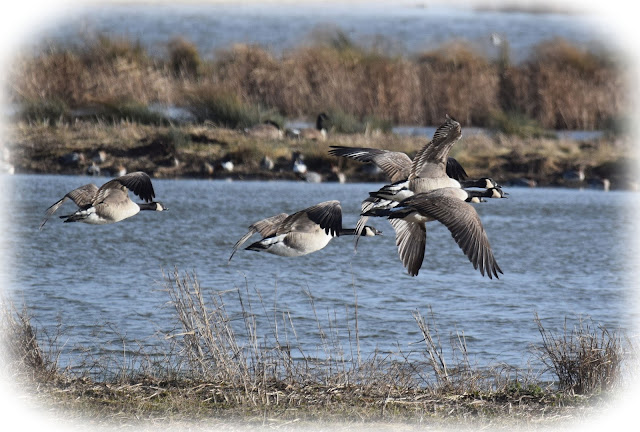 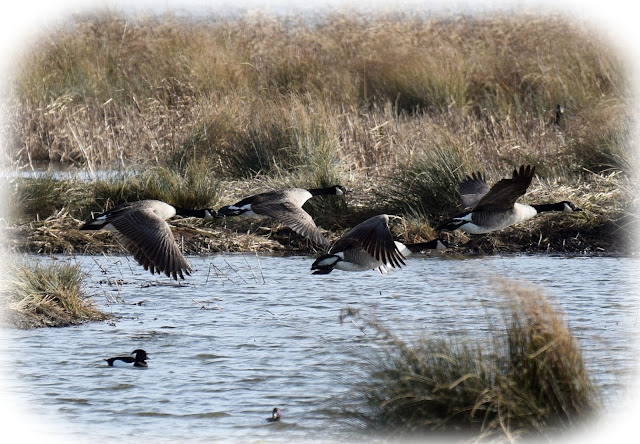 Mute Swans are always easy to lock on to for flight photograph. 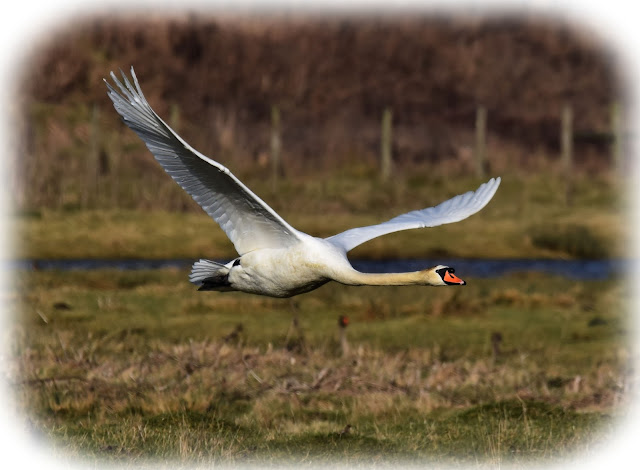 A distant Marsh Harrier and a Buzzard provided some raptor interest but the hoped for Short- Earred Owls did not show for me.

Time to move on, and I made my way around the circuit of Marshes, the reedbeds have been cut in places and provide some good viewing opportunities.
I finally caught sight of some movement in the reeds, expecting a Coot or Moorhen, it was a pleasant surprise when this Water Rail finally showed itself very briefly.

At the woodland feeding station, all the usual birds were showing, Goldfinch, Robin, Dunnock, Blue Tit and Great Tit. I watched a male Reed Bunting making its way to the feeders and nearly caught a good flight image.

This Grey Squirrel which was hanging around the feeding station looked like it was having a good winter, fattest Grey Squirrel I have seen for a while. 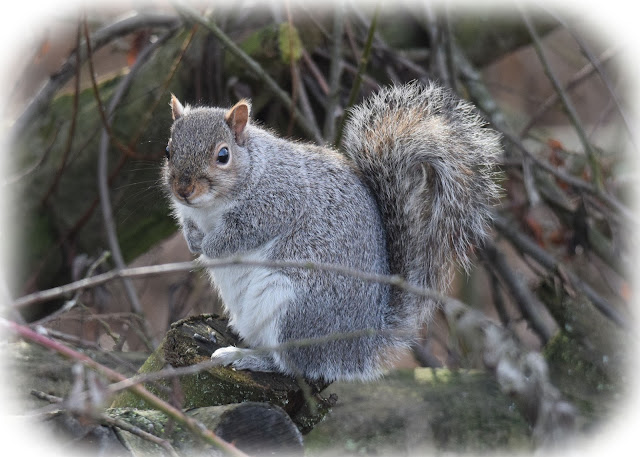 Just a single sighting of a Stonechat 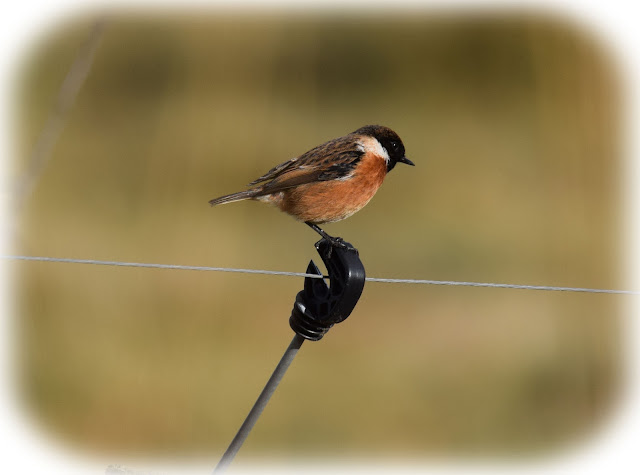 As for the water birds,  I had good views of Wigeon, Teal, Pintail, Mallard  and Shoveller.

An enjoyable walk around the marshes, won't be long before the Warblers start to return.
Posted by Merlin52 at 20:51 No comments: 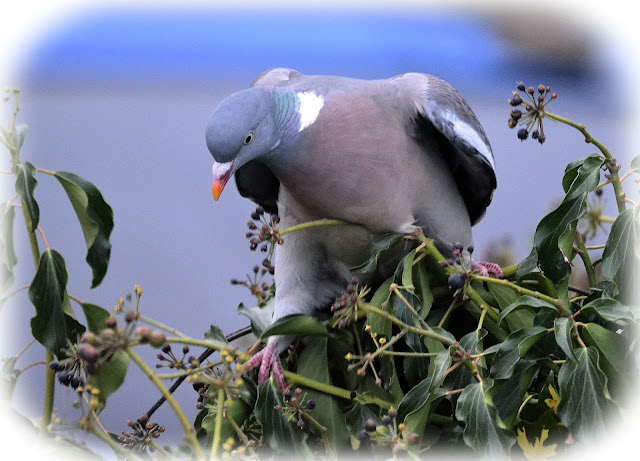 These Ivy berries first appear back in November of the previous year, but the birds do not eat them until now, although loved by a few species of birds I have only witnessed the Wood Pigeons, Blackbirds and the occasional Blackcap eating the berries, Thrushes such as the Redwing, Mistle Thrush and Song Thrush also like them but are rarely seen in the garden these days. 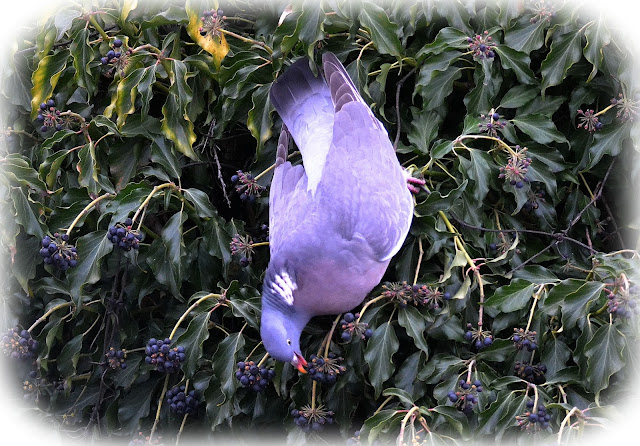 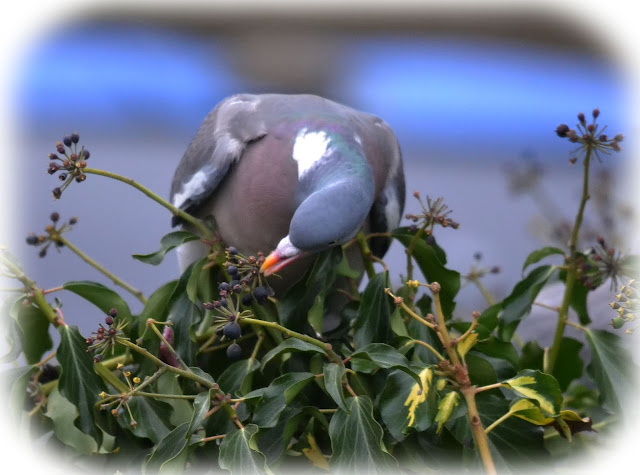 According to the RSPB these Ivy berries contain nearly as many calories as a "Mars Bar" gram for gram and explains why they are so popular, when at the end of winter food sources are running low.
Not so good for the human palette, all parts of the plant are toxic to humans, the berries are poisonous but because the berries are so bitter to taste, its rare for a person to ingest enough to become poisoned.

( The berries contain oxalates, needle-like crystals that cause pain and swelling in the lips, face, tongue, and skin.) 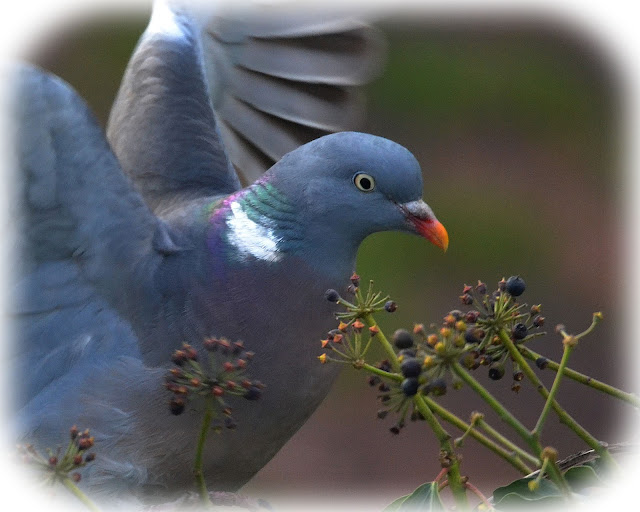 Its amazing how wildlife friendly a patch of Ivy is, and if you have this growing in your garden you will know this to be true. Mine covers an unsightly wall next to my pond, we have had Blackbirds nesting in the thick foliage, I have seen on occasion both Wren and Goldcrest searching through the leaves for a meal during the winter months. 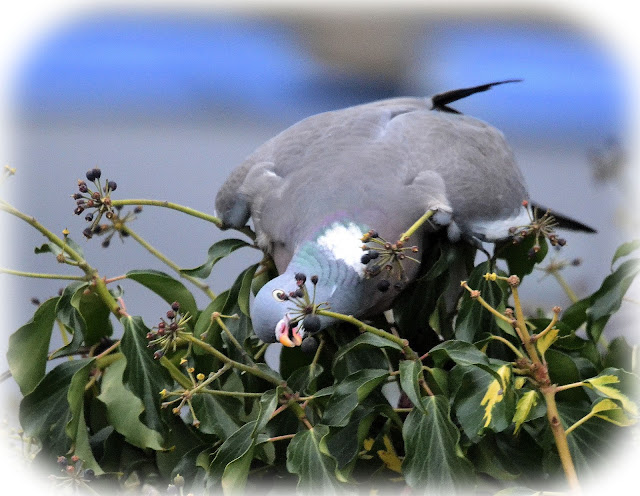 It flowers in the Autumn and its a magnet for Bees, hoverflies and all manner of other insects. The Ivy Bee Colletes hederae  feeds exclusively on its flowers  and I am fortunate to see these in good numbers.

Holly Blue Butterfly seem also attracted to the ivy, a bit of research revealed that the Holly blue lays its second generation eggs in the summer on the Ivy for its caterpillars to feast on.

I am pretty sure that theirs a few  Red Admiral hibernating in there somewhere.

Moths are not to be left out, the caterpillars of Swallow tailed, Yellow-Barred Brindle and the Double Striped Pug all feed on Ivy leaves. I have seen the Swallow Tailed Moth in the garden, hopefully I may attract the others to my Moth trap this year. 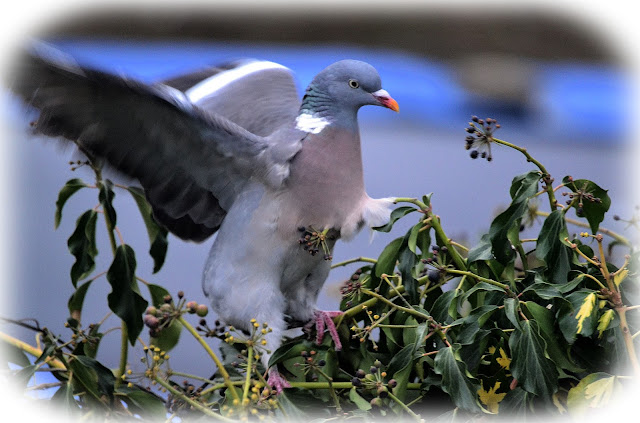 It seems to me that Ivy in the garden is a positive for attracting wildlife,

So eat on my fat feathered friends and enjoy.

Thought I would give the "Big Garden Birdwatch" ago this weekend, I made myself comfortable in the conservatory with a good view down the garden, coffee was made, feeders had been topped up the day before, I had high hopes for a good species list. My chosen time period was 09:30 hrs to 10:30 hours.

Unbelievably I stared at an empty garden completely devoid of birds for a good ten minutes or so, a few flyover Starlings a couple of gulls gliding over the garden.

15 mins and a single Starling approached one of the feeders closely followed by a further five giving a total of 6 Starlings, this was the most seen at any one time during the hour.

House Sparrows began to appear, a few singles, difficult to count as they made a snatch and grab raid on the feeders, the most I counted at any one time was eleven.

Another quiet period with not very much being seen, thirty minutes had passed with only two species in the garden.

A male Blackbird skulking under a tree at the bottom of the garden brought the list to three. A few more minutes passed and a group of Goldfinches landed on the pear tree with one moving down to the feeders.

A couple of Great Tit sightings but never more than one at any one time. just one Blue Tit.

A Magpie landed briefly in the pear tree before it moved on, a single Woodpigeon flopped down on the Ivy and started to eat the ripened Ivy berries, Eight species and 15 mins to go.

Two female Chaffinch approached the sunflower seed feeder, Three Collared Dove chased each other around the garden, difficult to work out who the unwelcome guest was.

A Robin was seen skulking around the back of the pond closely followed by a brief view of a Dunnock, a couple of minutes to go and three Ring Necked Parakeets landed on the pear tree.

The hour complete, thirteen species seen, a few absentees, the Greenfinch, Wren, Long Tailed Tit
and Carrion Crow which has been using the Pear Tree as a lookout post recently.

A short while after completing the garden birdwatch this lovely male Great Spotted Woodpecker was seen on the Pear tree feeder. Where was he when I needed him. 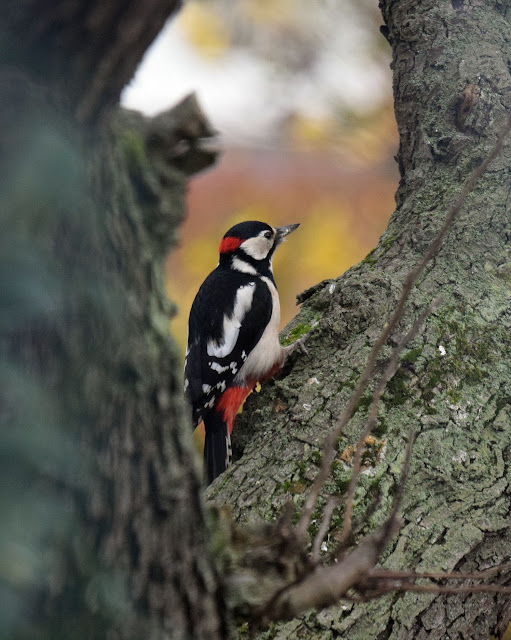 I always assumed the same Woodpecker was visiting the feeders but Interestingly the Great Spotted Woodpecker seen a few weeks ago was a female, shown below without the red neck patch of the male.