Well its not every day an Emperor visits your garden and takes a breather on a plant less than five feet away from you,  fortunately my camera was not far away and I fired off a few shots. before it moved on.

This is the first Emperor I have seen in the garden, Migrant Hawkers are the usual garden visitor  and  even those are quite scarce in the garden. 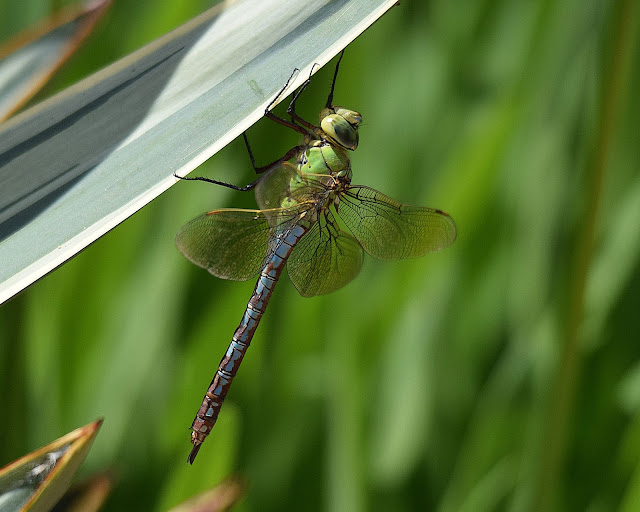 This looks to me to be an female Emperor, my field guide describes the female as having a dull green abdomen but sometimes blue, the brown markings instead of black could indicate an immature female, eyes are definitely green on this specimen, another indicator of a female, or could it be an immature male to be honest I am not entirely sure, I can say its definitely an Emperor Dragonfly.
( over to you Mr Conehead ) 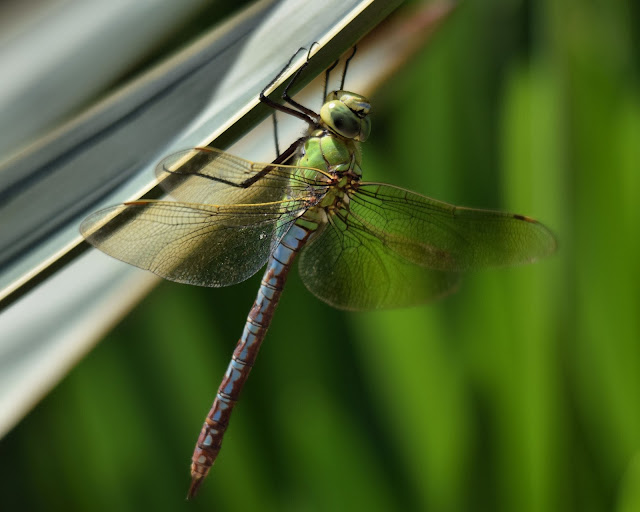 Ironic really when I think of the time I spent at Rainham Rspb reserve watching an Emperor flying around the "dragonfly pools" willing it to land close by on a reed for a photograph that was never going to happen.


Makes this sighting all the more satisfying.


Maybe its just me, but most of my encounters with this elusive bird  appear accidental rather than design.

And so it was on this occasion, the reed beds at Rainham RSPB are nearing there maximum growth, making bird observations very difficult unless you are lucky enough to find a bird perched on the reed mace heads, most sightings are relatively brief, the warblers give a tantalizing view, and then quickly melt back into the reed-beds.

The Bearded Reedling or Bearded Tit as its better known, is one of those birds that remain in the reed-beds all year long, doesn't make it any easier to see them. their diet changing with the season, during the autumn and winter months they feed on reed seeds, spring and summer months they switch to insect, my reference books stating that they are rather partial to the Reed Aphid.


Bearded Tits are a sandy brown colour with longish tails, yellow bills and eyes, the males have grey heads and the conspicuous black mustache down the side of the bill, I suppose its this that gives them a bearded appearance, certainly an attractive looking bird, and it's the males that most people want to see. 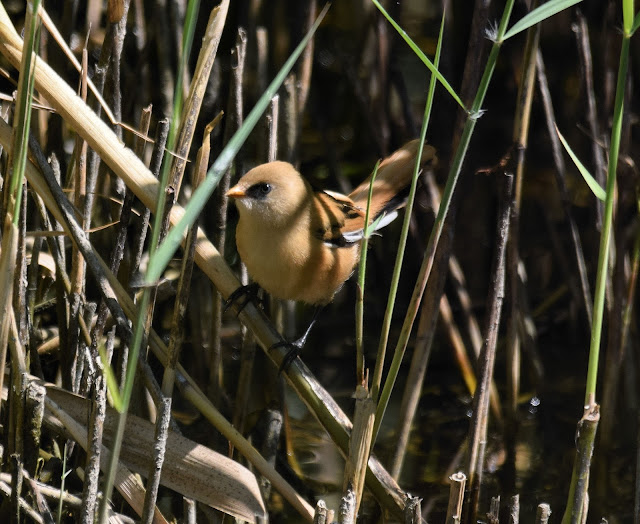 Most observations are preceded by the call of the bird moving through the reed-bed, described as a sort of "pinging" I have never heard this or its never registered with me as the call of this bird.
Perhaps its just my lack of high pitch hearing masking there arrival.

I always find it amusing when in conversation with other birders, and my disclosure that I have not heard this "pinging" call, they then proceed to give me a rendition of there interpretation of the call, still hasn't helped though, and I've heard a lot of interpretations.

So back to my all-but brief sighting today, in a small clearing in the reed-bed, close to the raised boardwalk,  two probable juveniles were moving through the reed bed floor, probably searching for these reed aphids. oblivious to the observers that had gathered, intent on their search for food. 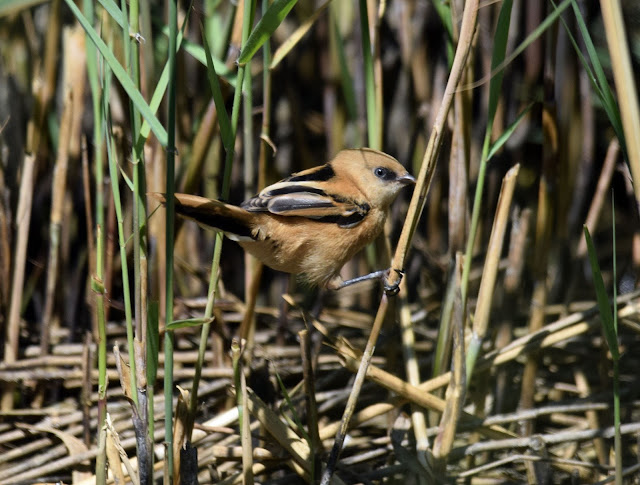 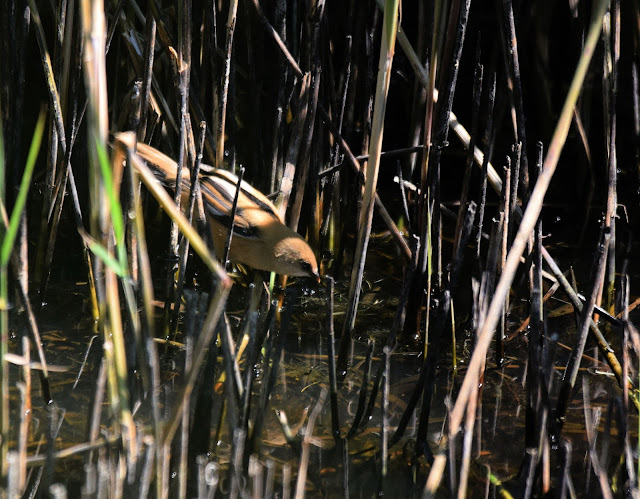 Very difficult to focus on the birds as they moved through the reeds, a clear shot almost impossible. but bearing in mind that breeding bird references state that there is probably only about 780 breeding pairs in the country, and there susceptibility to harsh winters, any sighting is more than welcome.