"The only way is Essex" or so it seems at the moment, with another good bird turning up at Roding Valley Meadows.

A juvenile Red-Necked Grebe, a grebe I have seen on one other occasion only, and that was back in 1994 when two Red-Necked grebes were present on Brookland Lake at New Hythe gravel pits, these two birds one a female, the other an immature male stayed together on the lakes from December 1993 through to mid-March 1994

If I had realized how sparse my sightings were going to be I would have made more effort to watch them.

So this juvenile which turned up on this country park lake for a few days now, was well worth the effort to go and see, as it turned out, a very smart looking individual.

My initial views were not very good as it was silhouetted with the sun behind it, and rather distant, but it moved into a small wooded bay where it stayed for a while feeding under the overhanging trees, giving some closer views with some nice reflections on the water. 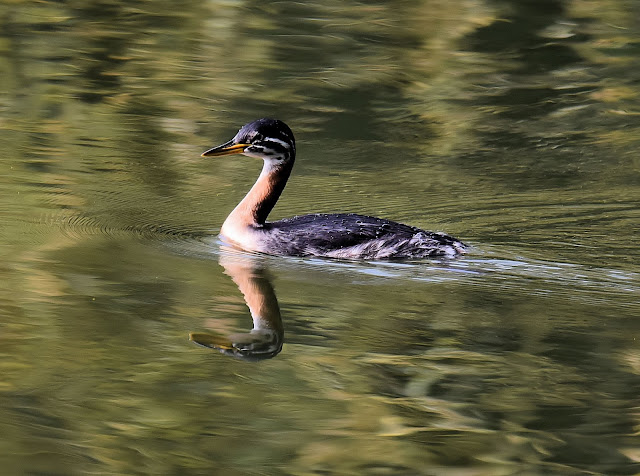 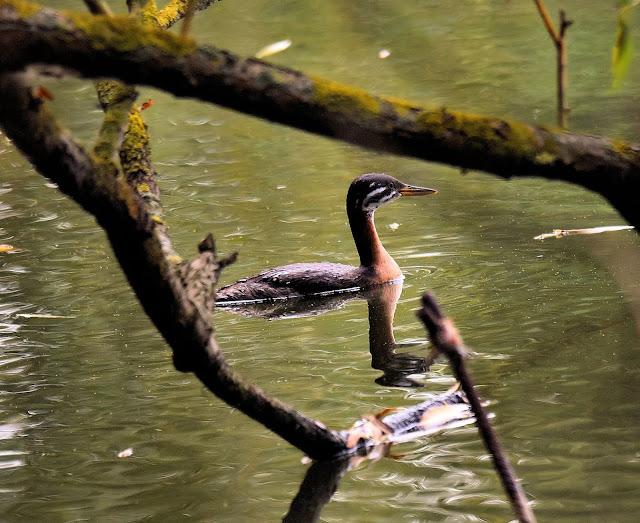 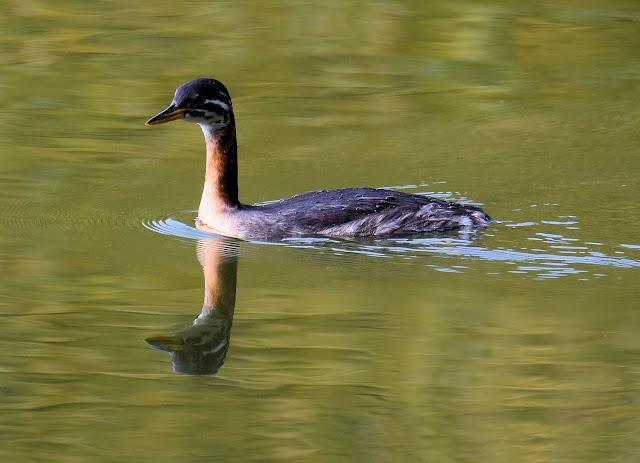 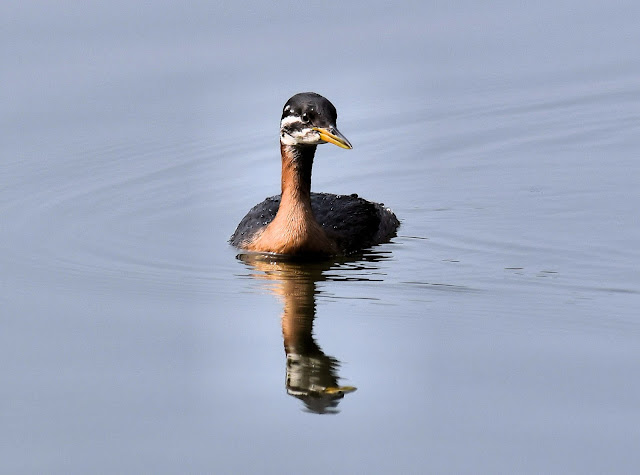 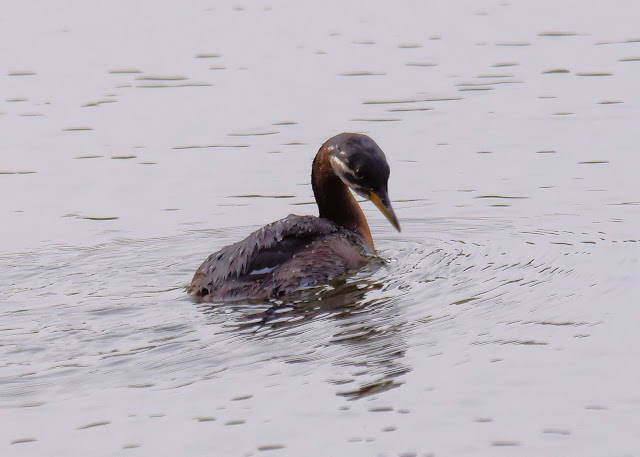 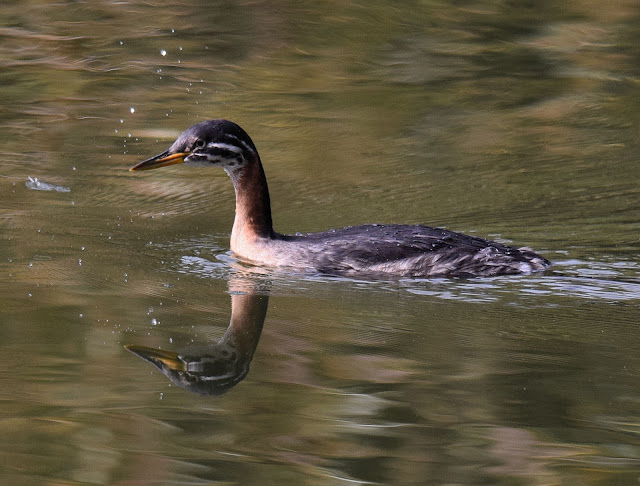 Lunch with a Dusky Shank !


The Shooting Butts hide at Rainham is one of my favored stop-offs for a lunch break, situated midway around the reserve with good views back and front over the reserve.

There had been some good bird sightings reported around the reserve of late, but not for me, this first part of the reserve walk had been very quite, a distant Marsh Harrier, a couple of Whinchats, which always remained just outside my camera range.
I had resigned myself to a quite day with probably not much to be seen, broke out the lunch box and poured some coffee.

A wader flew in to the scrape in front of the hide, my initial thoughts, another Redshank which are quite common around the reserve.

But no, this one looked different, a Dusky Redshank or a Spotted Redshank as they are more commonly referred too, much more elegant. I believe its the Juvenile Spotted Redshanks that are referred to as 'Dusky' on account of their dusky, brownish grey plumage.

This one stayed on view throughout my lunch break, allowing me to watch it feeding and check out all the salient identification points between this and the Common Redshank 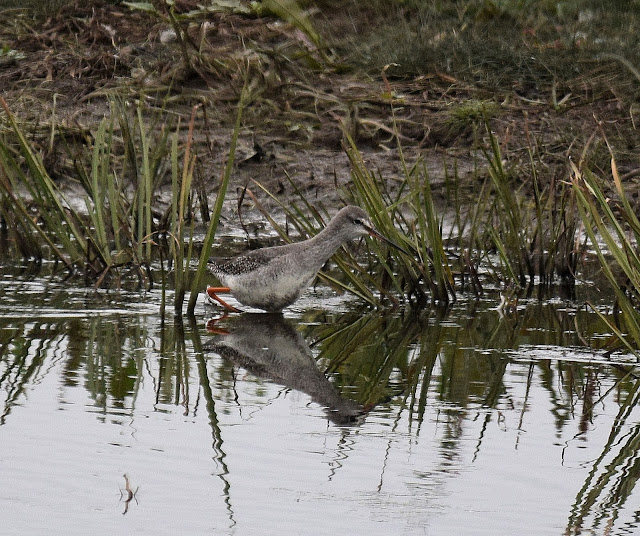 Slimmer and more elegant looking,  dark long bill with red on its lower mandible, prominent white eye stripe, red legs. I did not see it in flight, so the lack of wing bars was not discernible.

Its feeding habit was atypical too, feeding in slightly deeper water than its more common relative. 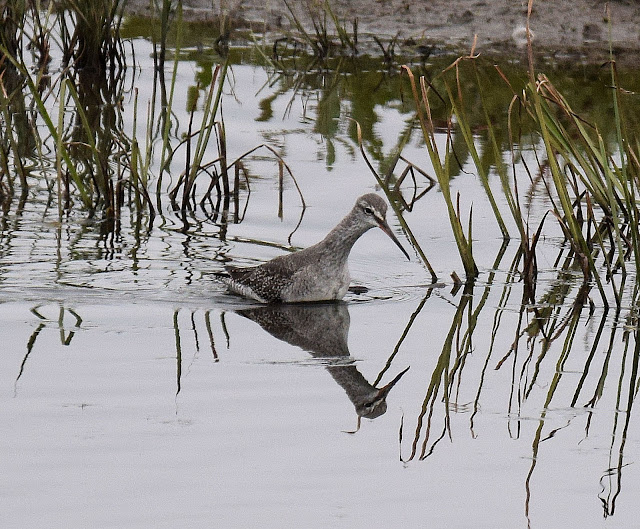 These Spotted Redshanks breed in northern Scandinavia and north-west Russia, there southwards migration back to there wintering quarters, southern Europe, Africa and Asia begins as early as June with the females leaving the breeding grounds first, males and  juveniles follow in July and August, most birds passing through in September, this is when they are passing through the UK and often seen around the southern bird reserves 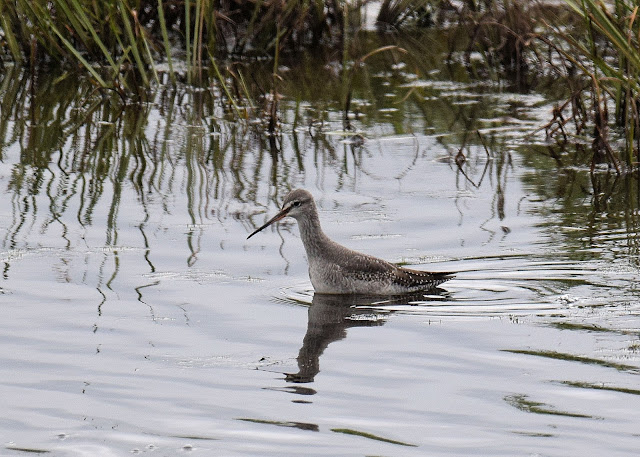 The Dusky Redshank are pretty spectacular in their black breeding plumage, the winter plumage is a  more subtle light grey above, white below, bright red legs and that prominent white stripe above the eyes.

The juveniles have a darker greyish brown wash, with white spots on there upper parts, with strongly barred underparts, legs not quite so bright red more yellowish

I put this one down to a  First winter, there is still some barring on the underparts, and the upperparts look quite dark, although I could be wrong. 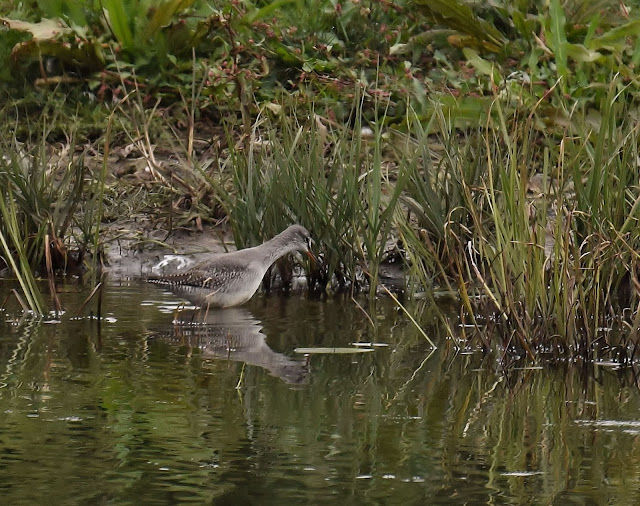 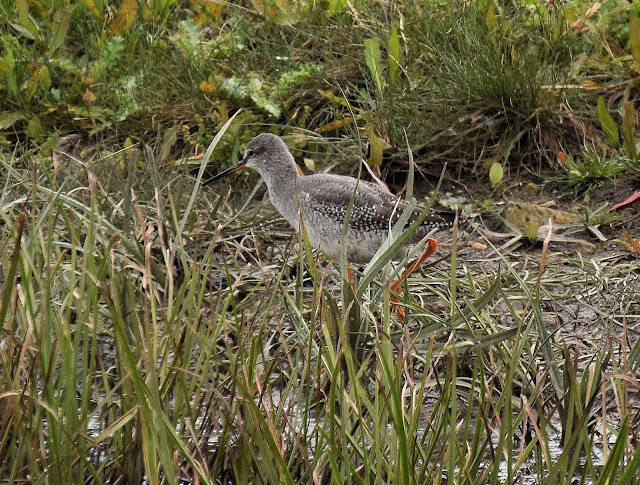 An interesting wader to watch until it was lost to view as it moved  behind one of the scrape islands.

One other interesting bird appeared as I was just about to leave the hide, a juvenile Cuckoo which was resting on the posts of the predator fence, a little out of range for my camera, so a few record shots, as I have never managed to photograph a Cuckoo as yet. 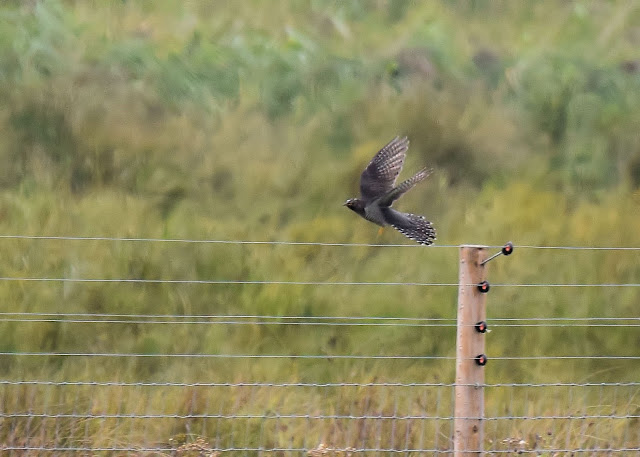 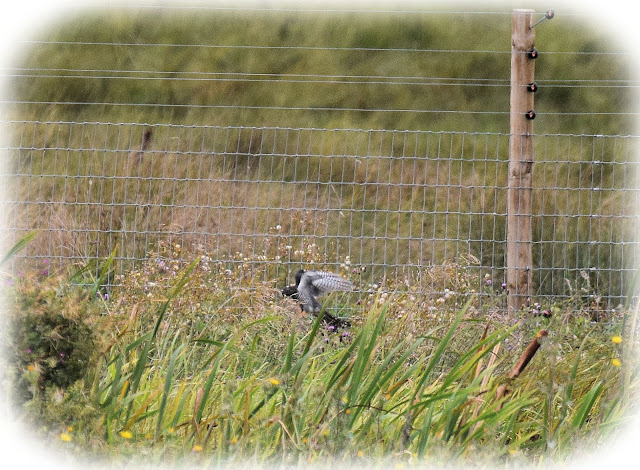 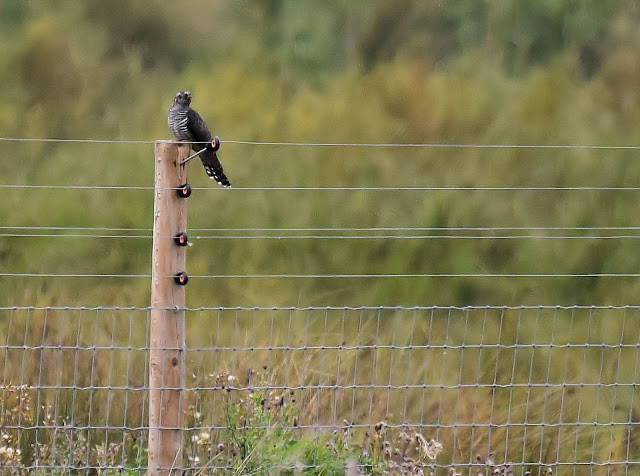 Always something to see at Rainham RSPB reserve

I wasn't expecting that !!!


Let me take you back to Ingrebourne Valley Park, a small group of  ' Bird watchers '  including myself, were enjoying the afternoon sunshine, waiting patiently for the Spotted Crake to take to the stage, the viewpoint perfectly positioned to view the muddy fringe of  a fairly small body of water.

By all accounts, views were going to be fairly short as the Crake makes its way from one side of the viewpoint to the other, before disappearing again into the reed bed.

So it was important to lock onto the Crake before it disappears and another long wait required, before it makes its way back again.
This seemed to be the general pattern of viewing, confirmed by some of the locals who had been watching the bird for the last few days.

As expected the Crake appeared, made its way across the viewpoint, giving everyone some excellent views of a very scarce bird.

As the Crake reached the far side of the viewpoint there was a shout of  "Osprey",
someone had glanced at the sky, unbelievably, while everyone was watching the Crake. 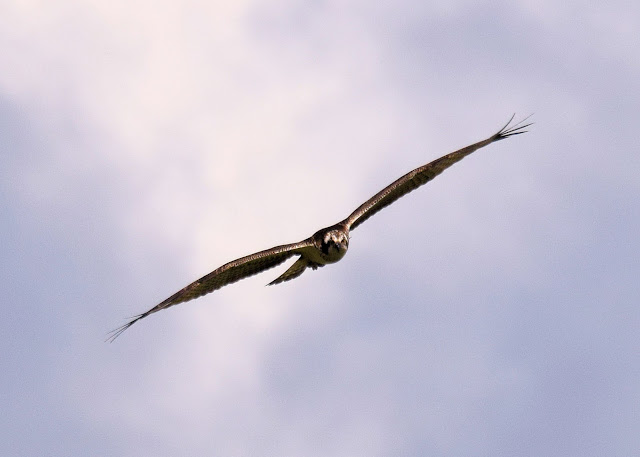 Everyone looked up, the Crake was lost to view,  but there was the Osprey heading straight towards us. 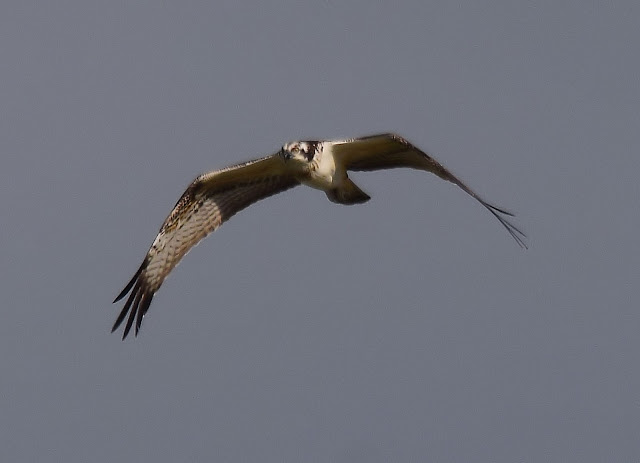 The Osprey came ever closer to the small lake and started to circle, coming lower and lower, at one point it looked as if it may attempt a dive for an unsuspecting fish. 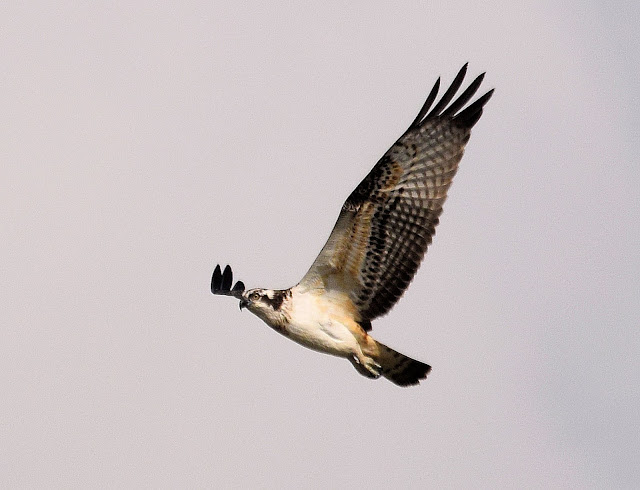 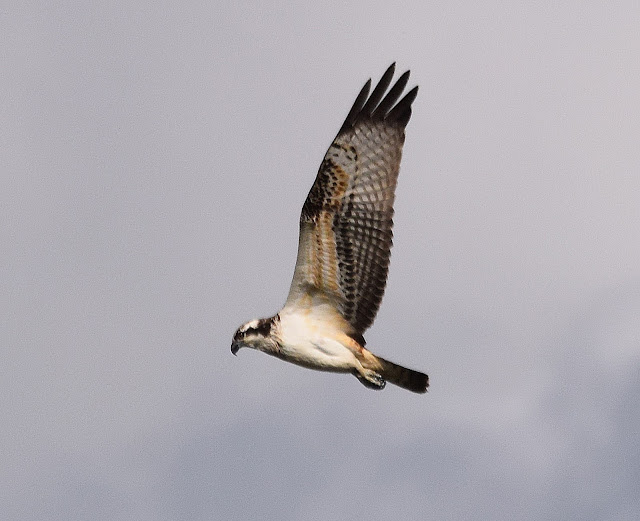 Everyone was sky watching now as the Osprey gave some excellent views in the sunshine,  it wasn't long before the local crows and Jackdaws moved in and escorted the Osprey away from the lake and out of view. 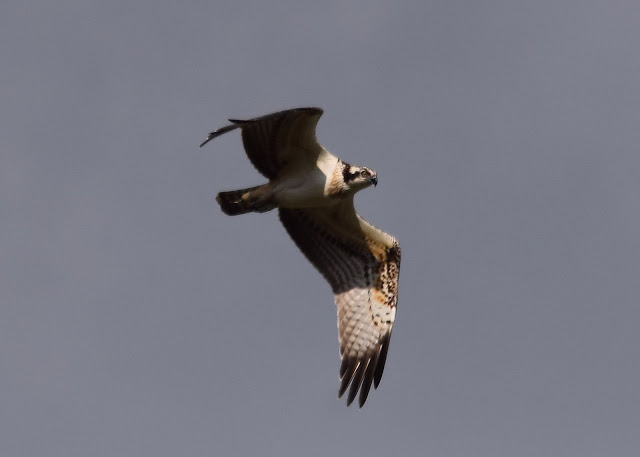 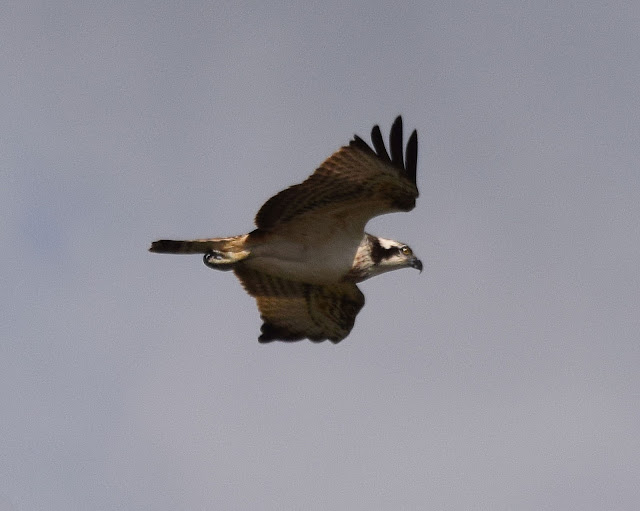 A very unexpected bonus, a beautiful bird to see. and worthy of its own blog entry.

Every now and then a bird will turn up relatively close which will temp me into a 'twitch' of sorts. Reports of a juvenile Spotted Crake at Ingrebourne Valley, not a million miles away from Rainham RSPB had caught my attention and was sorely tempting me.

I have seen Spotted Crakes before on a few occasions, but its been thirteen years since my last sighting, and time to reacquaint myself with this lovely little water bird.

I had spent the morning walking around Rainham RSPB saw a few good birds, but the main topic of conversation appeared to be the Crake just up the road and by all accounts showing extremely well.

It was too much to bear, I had to see the Crake for myself, I had a short time slot of  a couple of hours before I needed to be back over the Queen Elizabeth bridge and  back into Kent before the Rush hour traffic builds up and the inevitable delays ensued.

I eventually found the Ingrebourne Valley Park which was deceptively signposted Hornchurch Country Park for some unknown reason.

Just a matter of a short walk to the viewing platform and a wait for the Crake to show.

As it turned out, the viewing platformed was raised above the reedy fringe of a relatively shallow lake, there was warm sunshine on my back, the reed bed was superbly lit, and I had an excellent view of its favored feeding area. Just a matter of waiting for it to show.

An Hour had passed and no sign of the Crake, my cut off time was approaching, that feeling of disappointment was starting to creep in.

Then that murmur of excitement moved through the small group of onlookers that had been patiently waiting,   " there it is "  they muttered. pointing down from the viewpoint. 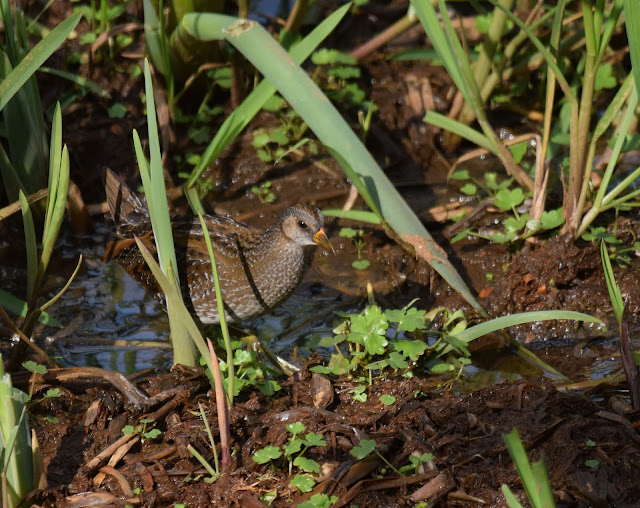 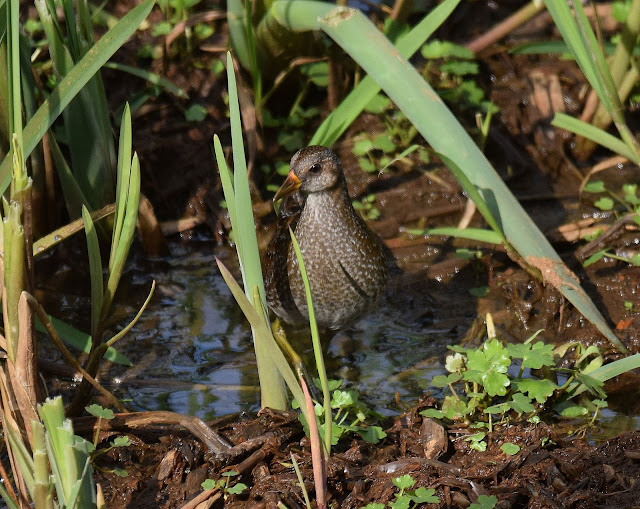 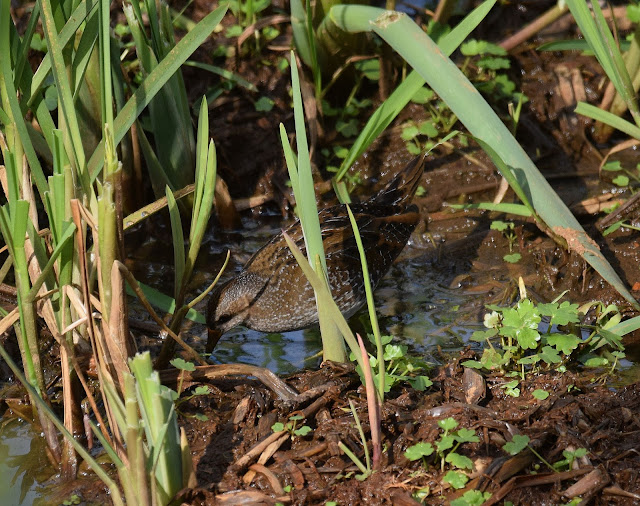 And there it was, the Juvenile Spotted Crake moving slowly through the muddy fringe of the reed bed,  it appeared much smaller and delicate than I remembered, but well worth the wait. the view was short and sweet before it again disappeared into the taller reeds and was lost to view on the other side of the viewpoint.

But as the Crake disappeared a surprise sighting appeared out of nowhere, which will be covered in my next blog entry. 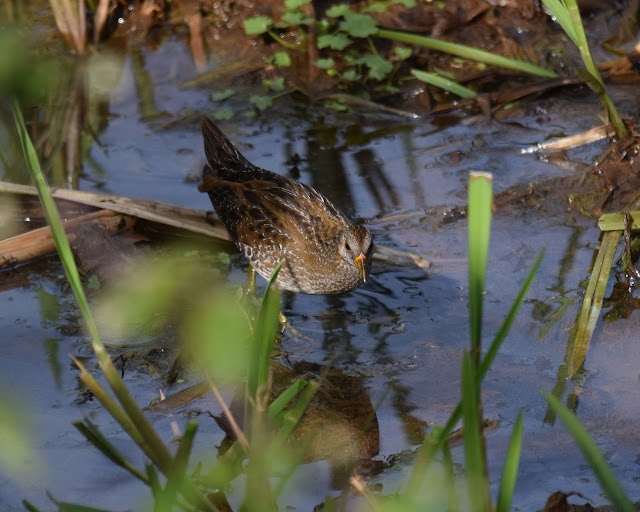 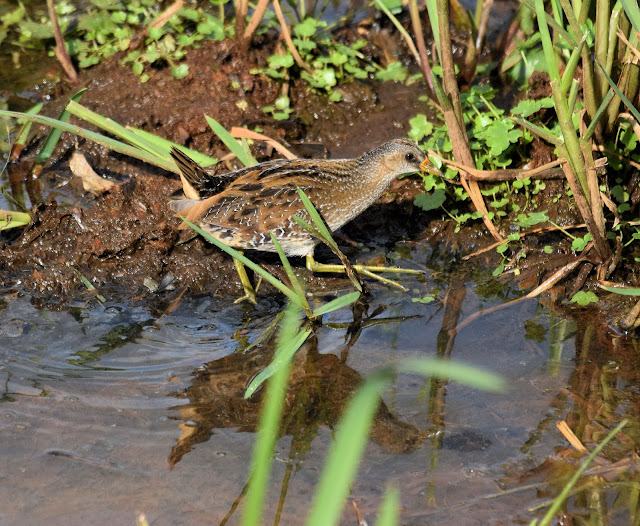 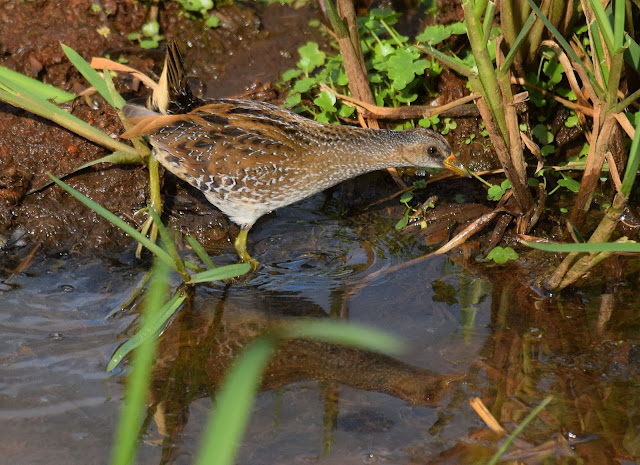 Ten minutes before my departure time, I made it safely back into Kent.