I suppose that its inevitable that the  'Pear tree feeding station' in my garden will attract its fair share of predators, its a bit like a restaurant with a good variety of birds on the menu, something I do feel guilty about, but thats nature, and on those occasions when an Sparrowhawk does make a 'sortie', most of the birds make it to cover.

The ring of feathers found on the lawn on occasion, bear testimony to those that didn't make it.

The Sparrowhawks appear to show no fear and are quite at home in the suburban environment, I have witnessed several attacks around the Pear Tree whilst gardening, although they rarely linger, I have managed to photograph a few over the years.

This is the latest Sparrowhawk to be photographed which I noticed  perched in the Magnolia tree at the bottom of the garden, didn't stay for long and was obviously looking for a meal. 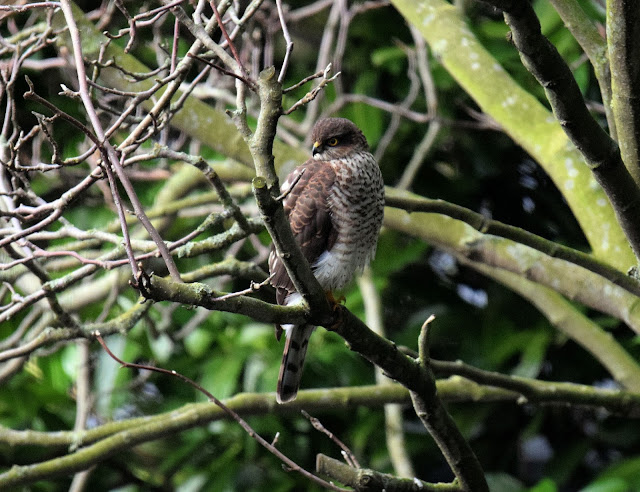 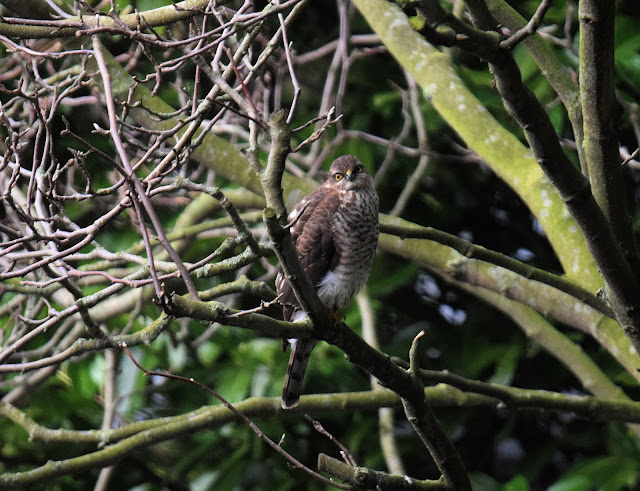 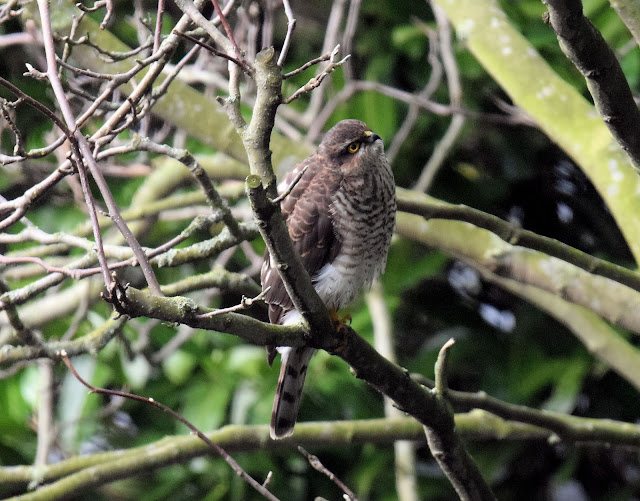 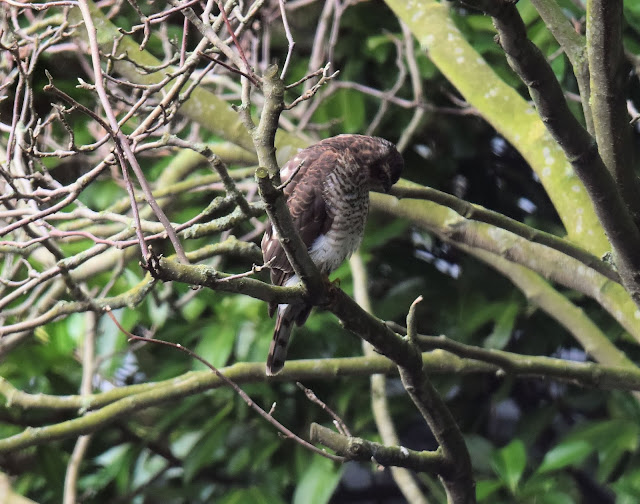 I am pretty confident in identifying the adult birds, this is a juvenile, but juvenile male or female I am not so sure, leaning towards a juvenile male, nice looking bird though.

Here's a photographic record of some of the Sparrowhawks that I have managed  to capture.

This probable second year female or adult shown below was the first that I managed to photograph back in January 2013, staying some time in the bough of the pear tree as it devoured its meal. 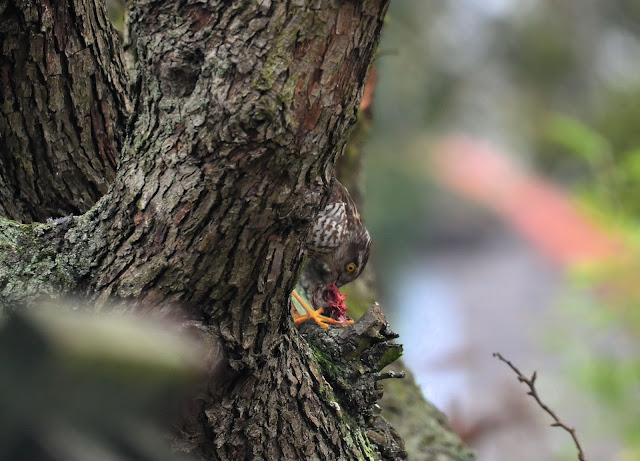 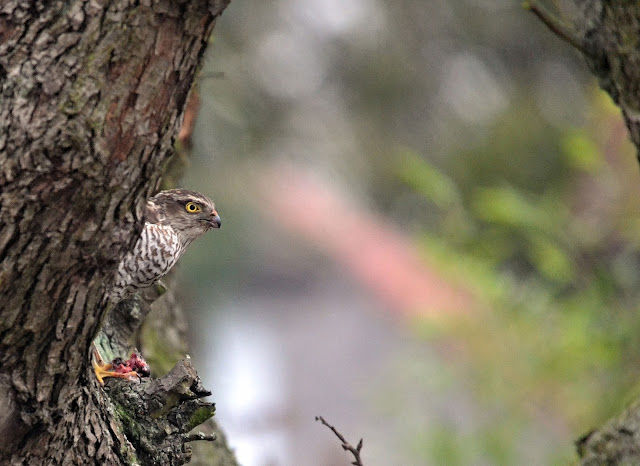 23rd December 2014 this fine looking male Sparrowhawk shown below, appeared from nowhere and landed on the fence in front of the feeders obviously scattering the  terror stricken birds on the feeders. 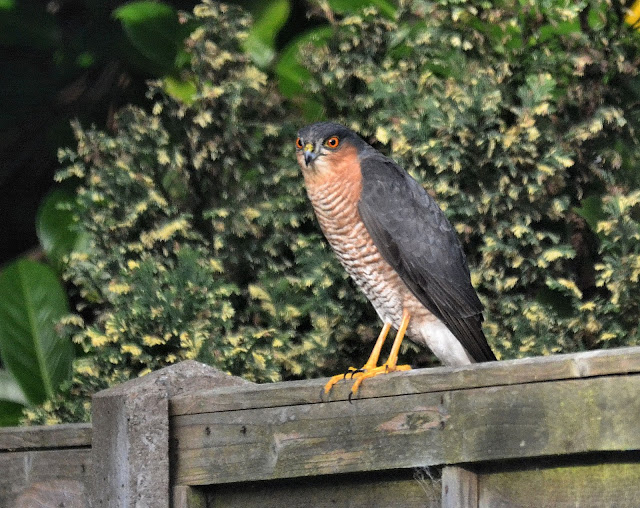 4th February 2015, possibly the same male again landed on the fence before flying off down the gardens. 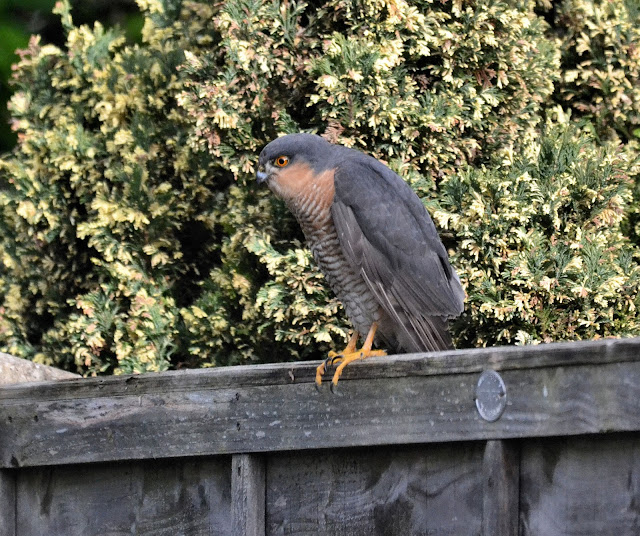 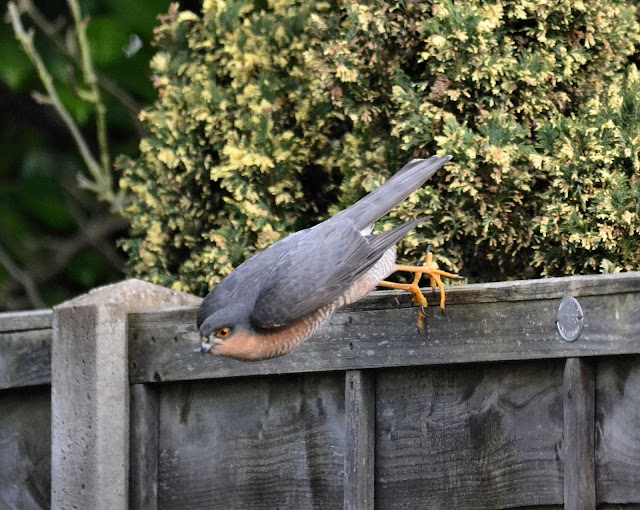 Once again on 24th November 2015, a male Sparrowhawk, possibly the same individual was seen in the shadows of the laurels at the bottom of the garden. 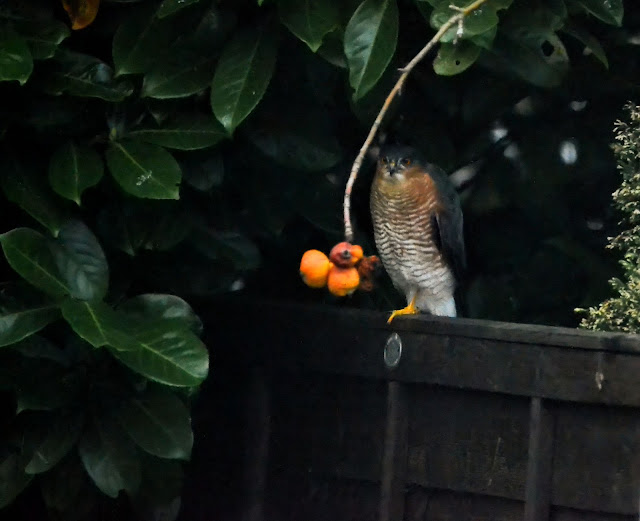 
I always try and get at least one visit to Dungeness in the winter to see some of their specialties, with spring fast approaching I thought I might have left it too late, but with the recent cold spell, I needn't have worried, plenty of winter birds still in attendance.

This was also an opportunity to try out my new 'Scopac', the hopeful answer to my equipment carrying dilemma.

Dungeness is one of those reserves where a scope and tripod are essential if you wish to see some of the distant birds that frequent the various lakes/pools, I find it hard not to take the camera and zoom lens and the must have binoculars and of course  the lunch box and flask.

The Scopac fits neatly on your 'tripod and scope' allowing you to carry it comfortably on your back, with Camera and lens poised on my hip, binoculars around your neck, I was ready for all eventualities and not feeling to weird in the company of like-minded people.

My first port of call was the Hanson hide, on the ARC pool, not too crowded and plenty of wildfowl on view,  the more common wildfowl were quickly ticked off, Pocard, Tufted Duck, Teal, Shelduck, Gadwall, Wigeon, Shoveller, Coot and a Great Crested Grebe.

My first Goldeneye of the season was soon picked out, a lovely Drake in the company of two females too distant for a photograph but fine views  through the scope.

On the far side of the lake opposite the hide, a Grey Heron stood patiently on the edge of the reeds, a Great White Heron was seen perched in one of the trees and  some nice views of a Bittern that fed along the edge of the reed-bed before melting  back into cover.

I can never resist the urge to  take a photo of these distant rarities, for me anyway.

They never work always a  blurred tiny spec which no one but you would know it was there in the photograph, but always serves a little reminder that at least you saw it. hence the need for scope and tripod. There will be a few of these distant blurred photographs on this page, for that reason only.


Bewick Swans have been reported of late here roosting on this pool, usally coming in at dusk and leaving early morning, so I wasn't expecting to see  any of these winter swans, fortunately for me and for some unknown reason two Bewick Swans returned to the pool and gave some reasonable views. 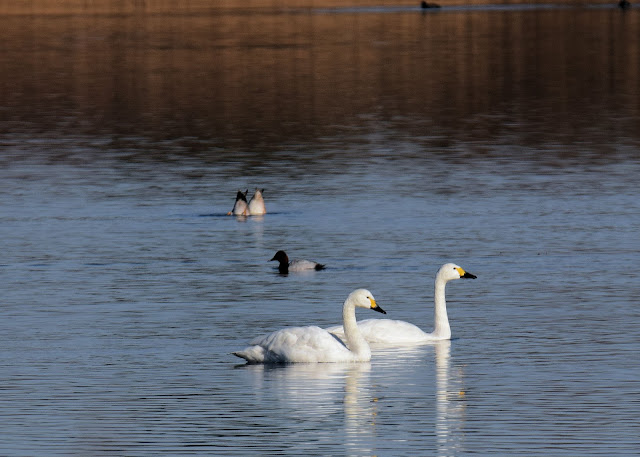 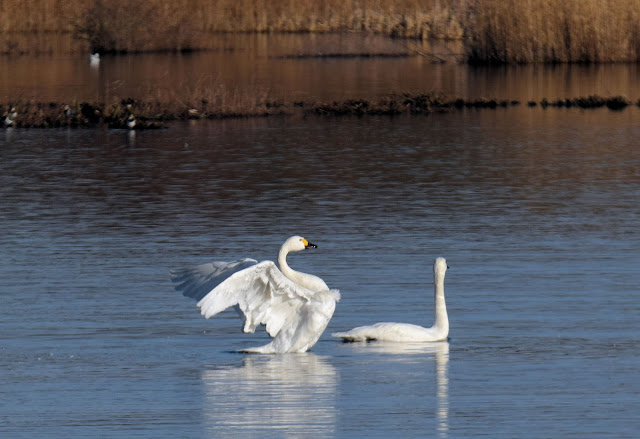 Plenty of Cormorants scattered around the islands,  and eventually the Black-Throated Diver made an appearance, but spending more time underwater than on the surface. the only photograph I could get was a rear view that shows nothing of interest, but there it was.

The Common Kingfisher gave a couple of fly-byes,  but decided not to use the perches by the hide.
A small flock of Black Tailed Godwits flew in for a wash and brush up and the ever present Lapwings gave some fine displays when flushed by the local Marsh Harriers.

So with three good birds in the bag, Bittern, Bewicks Swan and the Black Throated Diver I moved on the main reserve, stopping for a quick view of the feeders by the entrance cottages in the hope of a Tree Sparrow  among the many Chaffinch and Great Tits feeding there. Just the one.

My main quarry now was a hoped for view of a Smew, and if I was lucky the Drake or 'White Nun'
always a spectacular bird to see in the winter.

Most of the lakes seem occupied by the many Cormorants tat seem to have invaded the reserve, I did notice that a birder had tried to count the huge numbers reaching just under two thousand with more arriving all the time. 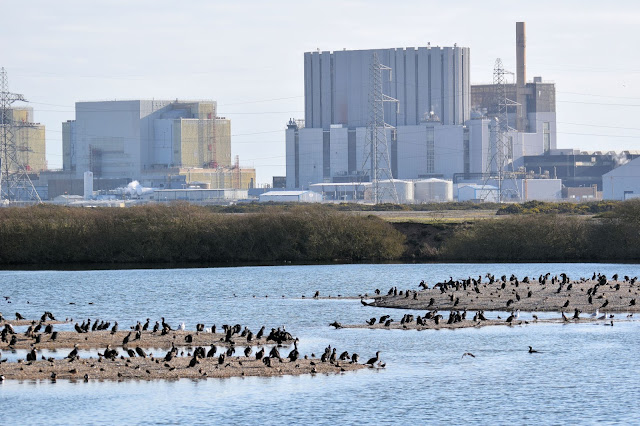 On to Christmas Dell hide where I quickly found the Smew, a fine looking drake and two Redhead females , but frustratingly on the far side of the pool, I did witness some interesting courtship behaviour, the female redhead kept circling the drake with its head and neck flat to the surface of the water, its tail and rump vertical . eventually the drake took the hint and holding the redhead underwater by the scruff of her neck fulfilled his role.

You can just make out the  White Nun drake and the redhead with its rump raised  in this very distant view.
As a bonus  there was a Slavonian Grebe swimming very close to the Smew  along with  a single Little Grebe.

Another Bittern approached the hide in flight before dropping down into the reedbed. giving a slightly better if not shorter view.

The walk along  to Denge Marsh hide did not produce many offerings, another Marsh Harrier, a few Meadow Pipits and another distant Great White Heron.

As I walked back along the trail to the car park a Goldcrest flitted about in the willows next to the lake, true to form always on the move, but managed to get a snatched photo.

Just time for a quick sea watch before the sun went down was not very successful, although a couple of Gannets flying distantly by were picked out , a raft of Great Crested Grebes, is that the correct term ? and some unidentifiable Auks bobbing about in the waves.
No Black Redstarts for me on the power station walls just a couple of Pied Wagtails.

All in all a successful winters walk, seeing a few good and scarce birds along the way, the 'scopac' performed well and I'm looking forward to using it in the future.