Amble through the Marshes.


I was taken aback recently, when in conversation with my wife as we walked our dog through the woodlands, she described me as a "slow walker",  I think the 'fitbit'  permanently affixed to her wrist, counting her never-ending steps may have had something to do with her pace though, strangely I had always considered myself as reasonably active.

But then the other day as I was walking along the pavement in parallel to a younger walker on the other side of the road , I noticed myself being left behind, this was obviously playing on my mind, perhaps I am a slow walker I thought, but then again since retirement, I'm in no real hurry to get anywhere these days.

Once again as I walked around the circular route of Rainham RSBP I noticed that after at least an hour and half I had made no real headway at all on the route ahead of me, what is the relevance of these observations you may well ask yourself.

As I sat in one of the hides enjoying the wildlife around me, a coach load of senior schoolchildren (probably fast walkers) burst into the hide shattering the peace and tranquility of the moment, I heard the mutterings of  "nothing to see here" as they all moved off, thankfully.

I smiled to myself thinking they still have a lot to learn about enjoying the countryside, maybe slow down, open their eyes, close their mouths.

Definition of  'Amble' is quite apt I feel, to walk at a slow, relaxed pace, especially for pleasure, enjoy the moment.

No more worries for me, I'm happy to 'amble along' and see what I see.

Plenty of Butterflies on view today, especially these Green Veined Whites ,a bit flighty in the warm sunshine. but you can usally find one more interested in nectering, that allows a close view, love those eyes. 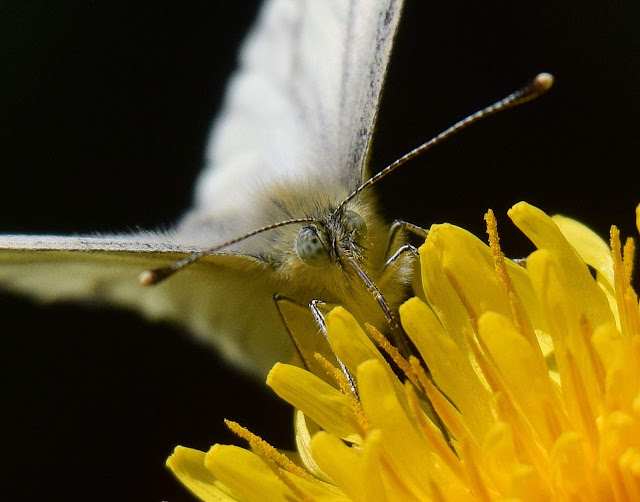 As I ambled along the track, I could hear a Cuckoo calling , my first for the year, but I was distracted by a Holly Blue Butterfly taking in the early morning sunshine, typically in the wings closed position.

The call of the Cuckoo grabbed my attention again seemed a lot closer this time, just could not pin down its position, a game of 'hide and seek'  now pursued with the Cuckoo seemingly close by and then suddenly far away. the woodland borders the reed-bed, it had obviously selected a good vantage point ,it was calling quite regularly now, but still difficult to see, then suddenly it flew out across the reed-bed in front of me, quickly attracting the attention of the nearby Lapwings.
I managed to fire off a few photographs, although relatively distant, a bit of cropping produced a reasonable image. 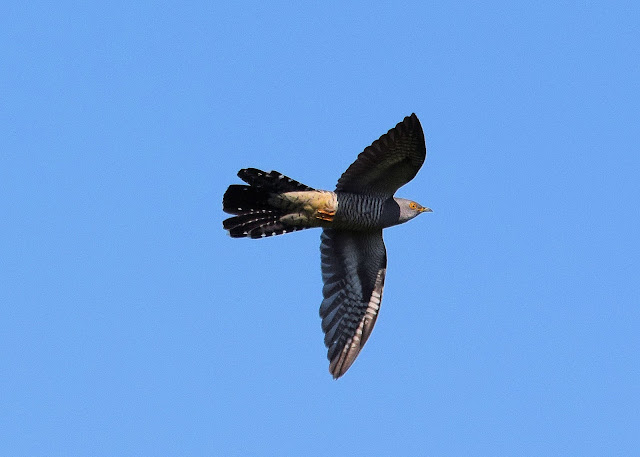 As I watched the Cuckoo, a couple of Swifts were seen again my first for the year. This was probably a male Cuckoo, I was informed by another Birder watching the Cuckoo that the female Cuckoo has a different call, more of a gurgling bubbly sound he explained, well I didn't know that.

As I approached the old Cordite store, the Cuckoo was calling again, and briefly touched down in the tree tops by the entrance to the store, 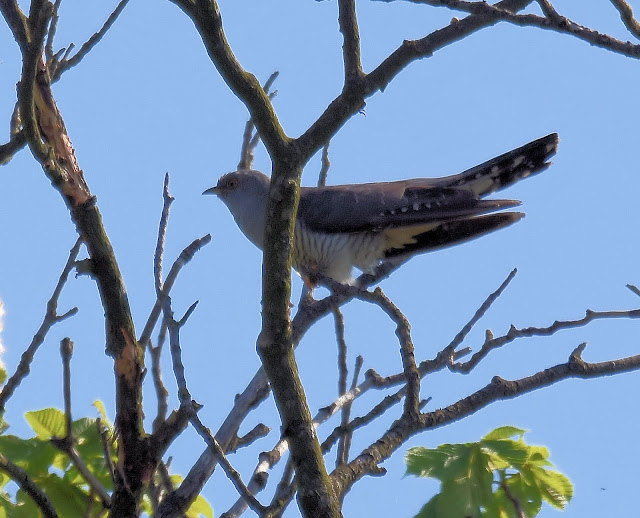 Still ambling along, I approached the first of a number of Insect hotels scattered around the Cordite store always worth checking out, a Lizard caught my attention sunning itself on the decomposing wood. 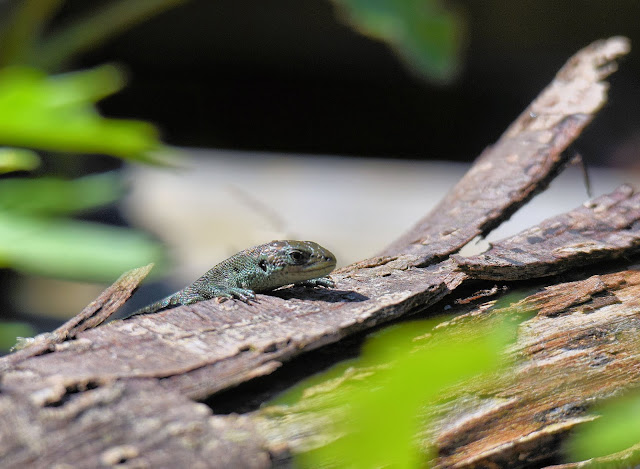 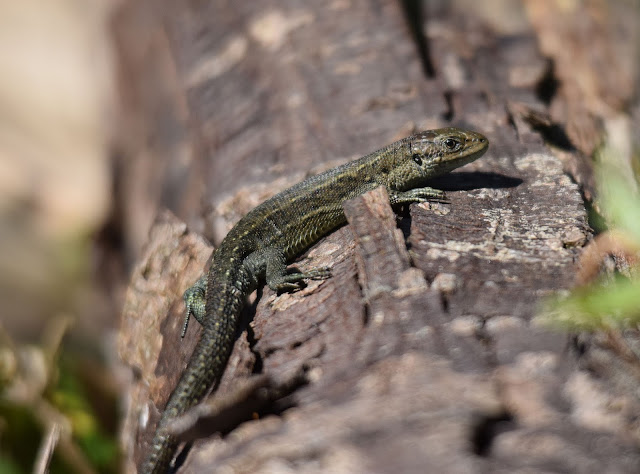 Blackcaps, Great Tits and Chiffchaff were all seen in the surrounding trees together with this acrobatic Grey Squirrel, not sure what he was eating, but he was obviously enjoying it.

The Cordite store is always good for a bit of insect hunting, Damselflies were everywhere, mainly Azure and Blue Tailed, nice to see them again around the marshes.

More Butterflies to be seen here, Green Veined Whites , Holly Blues, and the sighting of the day for me in the form of this lovely little butterfly, the Green Hair-streak. it didn't stay for long and I spent far too long trying to relocate it. about the size of a Holly Blue and that green metallic sheen on the underside of the wings helps it blend in perfectly with the newly emerged foliage.

My attention  now was drawn to the local spiders, a few Nursery Web spiders were sunning themselves on the nettle leaves. 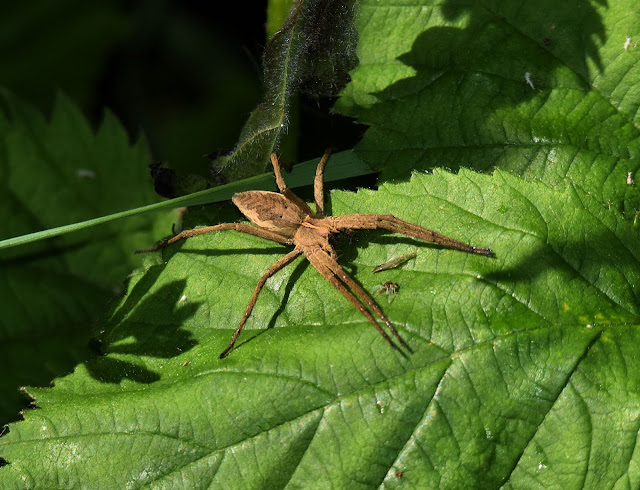 I had hoped to find some recently reported 'Jumping spiders' but no such luck, I did find a nice 'Wolf Spider' on the wooden bench in the store. 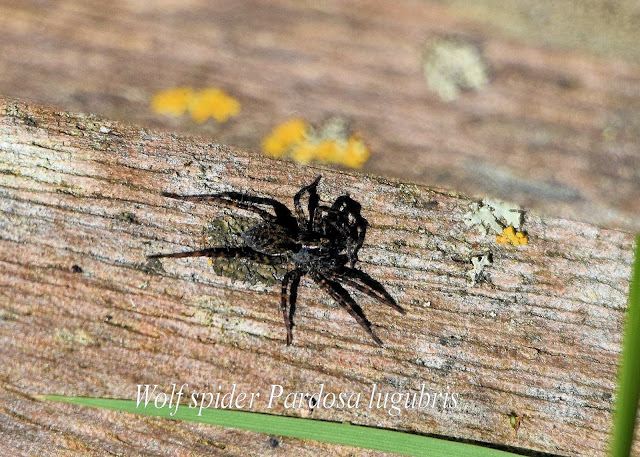 Only Bumblebees seen were White Tailed Bumblebee and the common Carder bee.

( my original identification is wrong, the White tailed Bumblebee is possibly one of the cuckoo species Bombus vestalis , thanks to Conehead54 for correction. also a species of Bumblebee not encountered before.)


It was probably about this time I realized that I was not making much headway, my 'ambling' almost approaching a standstill. I moved on picking the pace back up to an amble, but I was approaching another favored spot, an old wooden bridge near an overgrown pool, back to a stand still as I searched for Dragonflies and damsels, in particular the Large Red Damselfly, I have seen them on this near stagnant pool in past years. it wasn't long until I found my first of  three or four Large Reds. Quite pleased with that sighting. 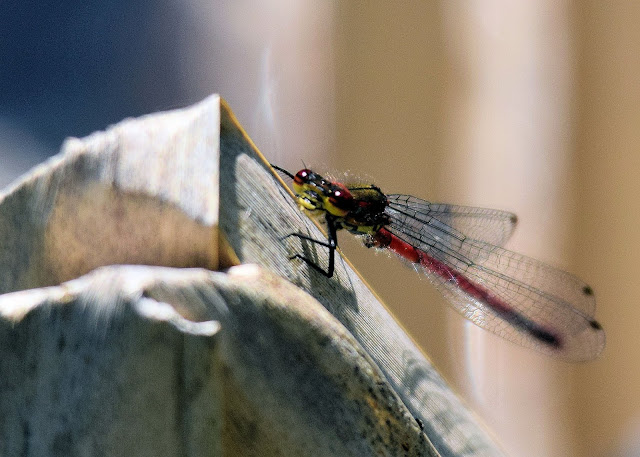 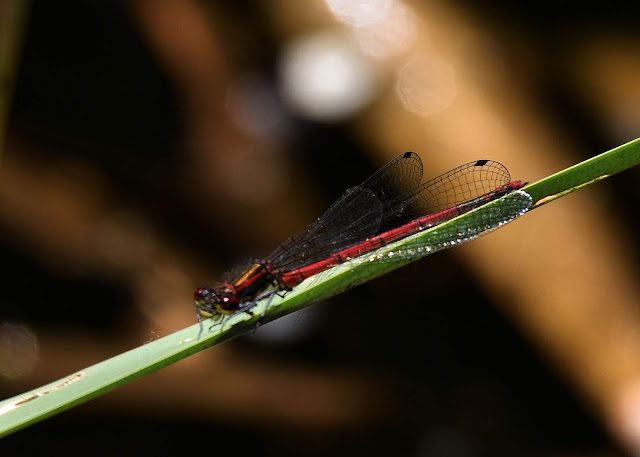 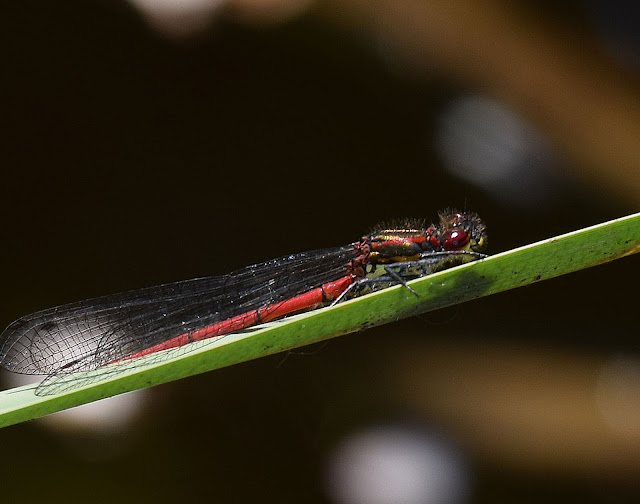 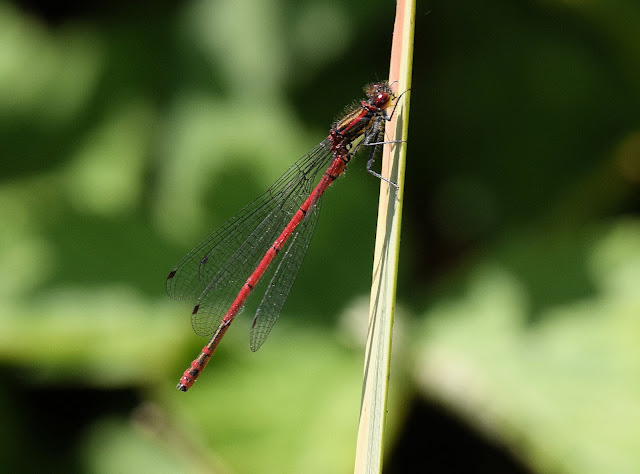 And as a bonus , a Hairy Dragonfly flew in and landed on the overhanging vegetation just long enough for a photograph.

I was joined here by one of the local Robins which I suspect was waiting for a handout of free meal-worms which they have been enjoying recently by local birders hand feeding them. I felt guilty as I moved on with the Robin watching my every move. 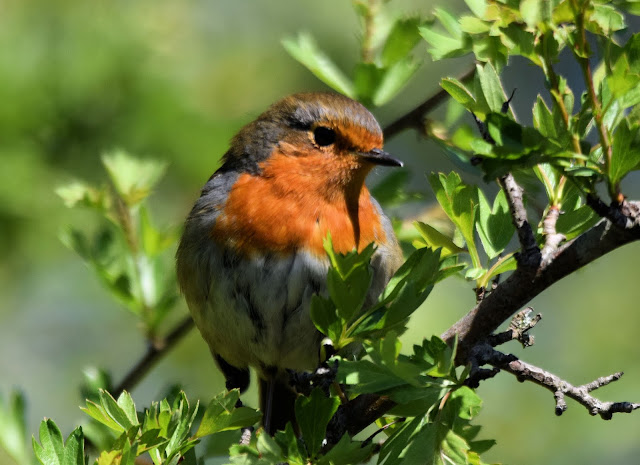 As I moved out of the woodland a few Speckled Wood Butterflies were seen. along with a single Peacock  and a Small Tortoiseshell bringing the Butterfly tally to seven species. 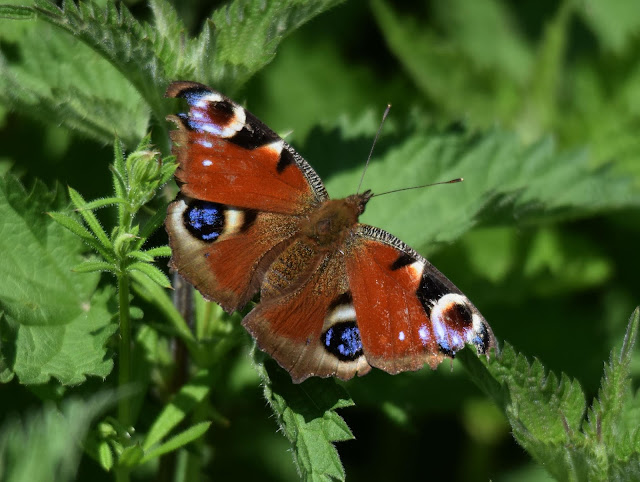 Back on the board walk and into the reed-beds I came across this gaudy male Pheasant looking very splendid in the sunshine, if not out of place in the reed bed. 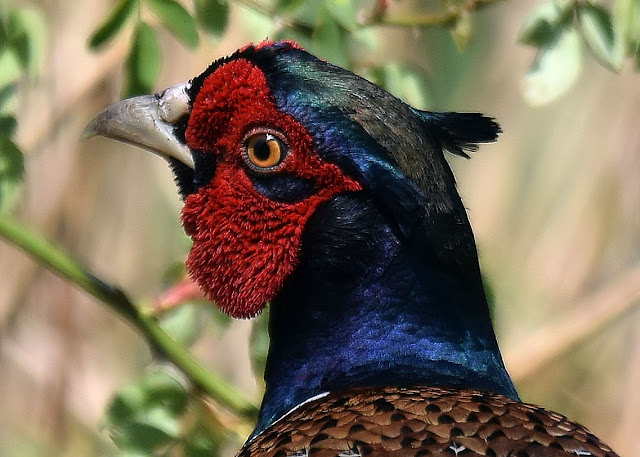 Still ambling along, I approached the Ken Barrett hide, always worth spending some time here. a pair of Gadwall seemed very at ease with each others company. 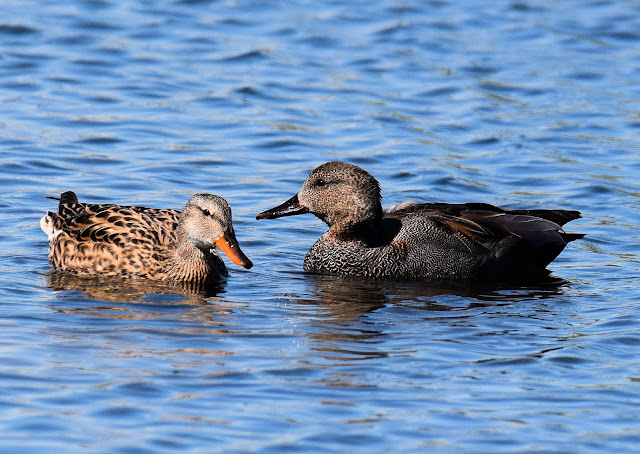 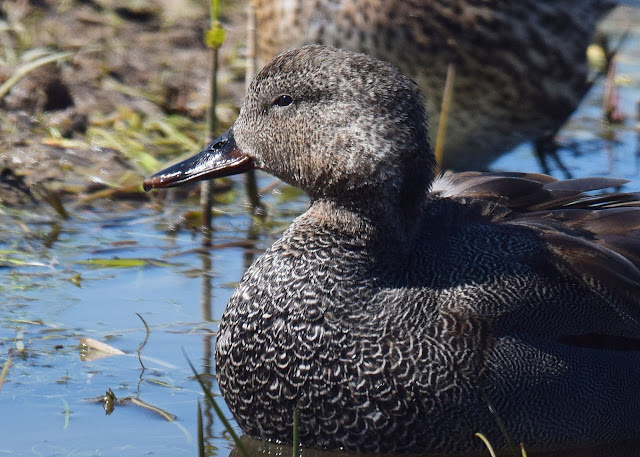 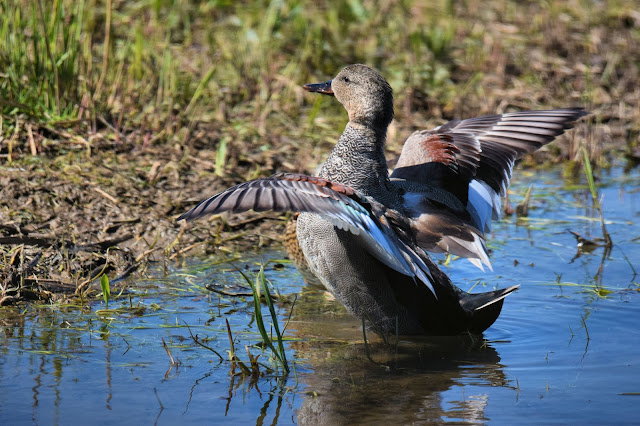 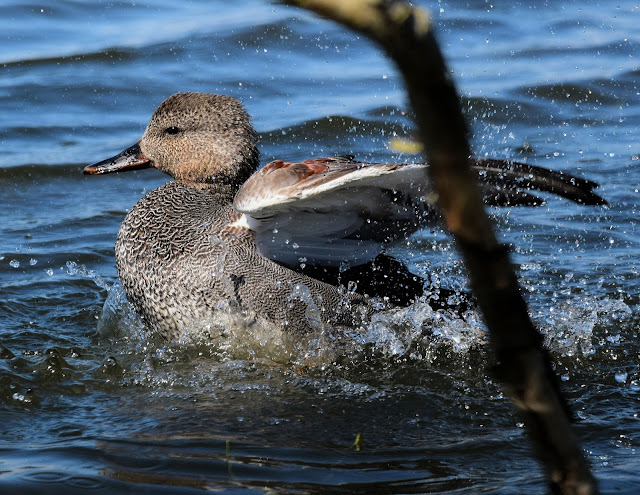 Unlike a poor female Mallard duck which ventured out of the cover of the reed-bed and spent most of her time trying to escape the attention of three Mallard drakes. 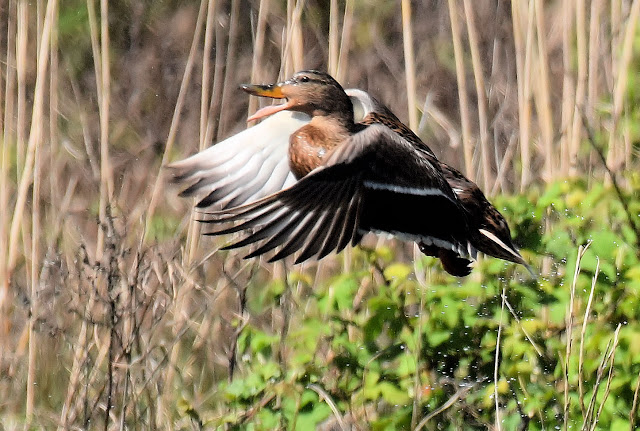 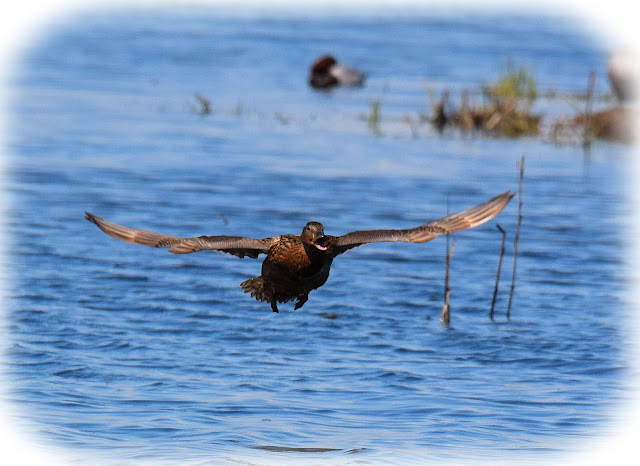 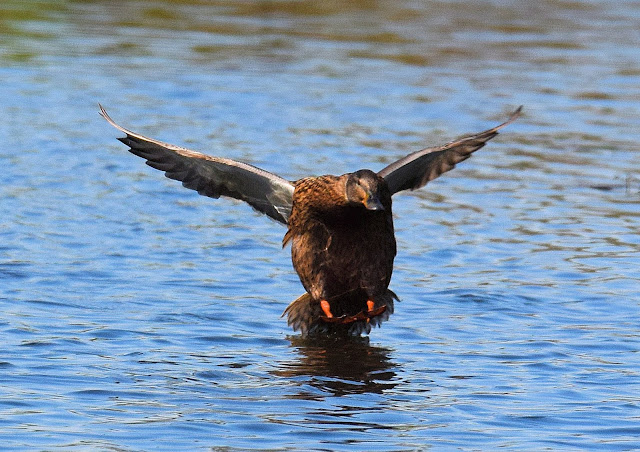 A family of Coots were feeding close to the hide providing some nice views,  I presume the male Coot was very protective of his family chasing away the Tufted Duck, Pochard and a pair of Shovellers. 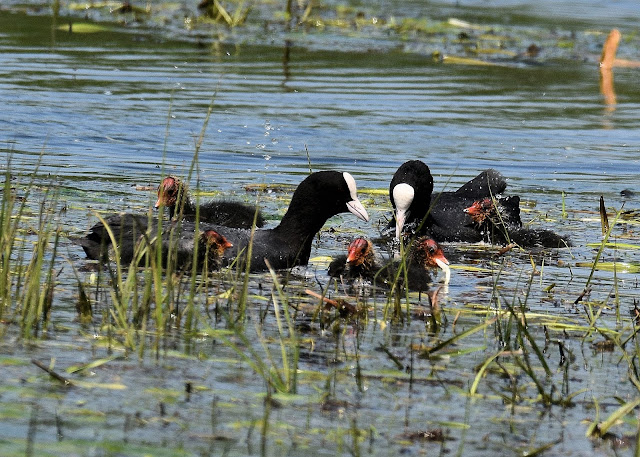 A couple of Common Terns put in an appearance, always distant but nice to see. 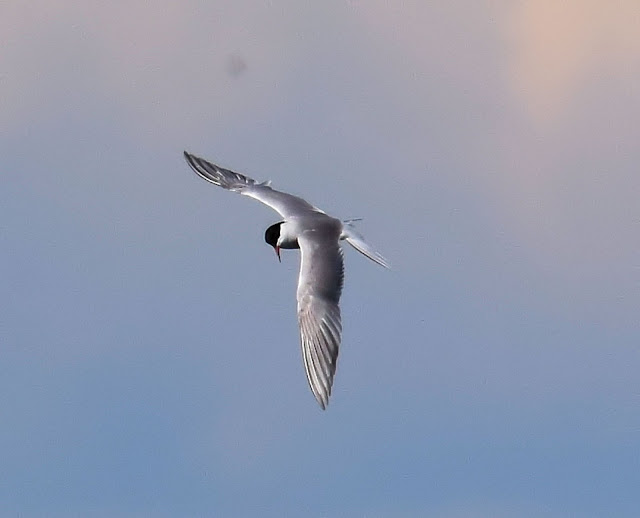 It was at this point , the hide was invaded by the fast walking children, fortunately not staying long, as their was nothing to see here. !!!

Not the Grey Herons, the Little Egret, the Marsh Harrier, the Hobby, the Moorhen. the Marsh Frogs

Leaving the hide and approaching the reed-beds alongside the channel tunnel rail track. a quick look at the Terrapins favored pool, found him sunbathing on some old reed stems. only partially hidden, totally ignored by the fast moving children. I wonder how old this Terrapin is, seems to have been in this particular pool for some time now.

Other birds noted  along this north walk, were Cetti's Warbler, Reed Warbler, Sedge Warbler and the resident Reed Buntings.

Moving on through the Dragonfly pools, no sign of any Bearded Tits for me, but I did pick up two Wheatears, Common Whitethroat. two more Wolf Spiders crossing the track, one carrying its egg sac. and Little Grebe. 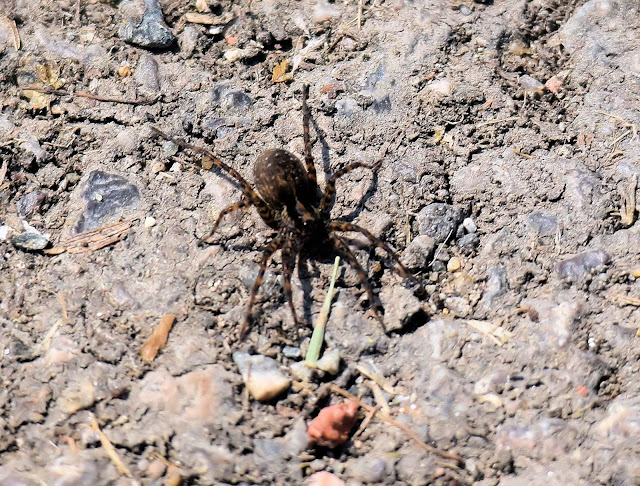 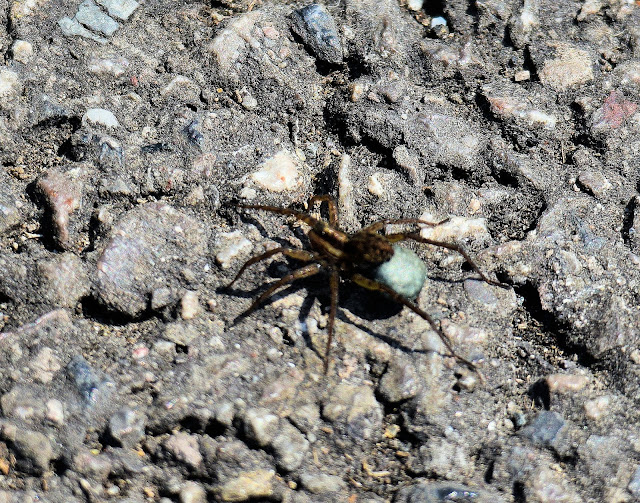 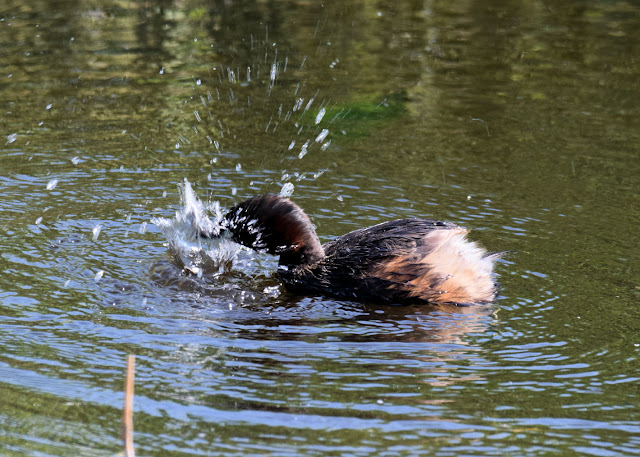 As I approached the end of the circuit I spent some time watching a Dragonfly cruising up and down the Mardyke eventually settling on a reed stem allowing me to identify it as a Four Spotted Chaser. 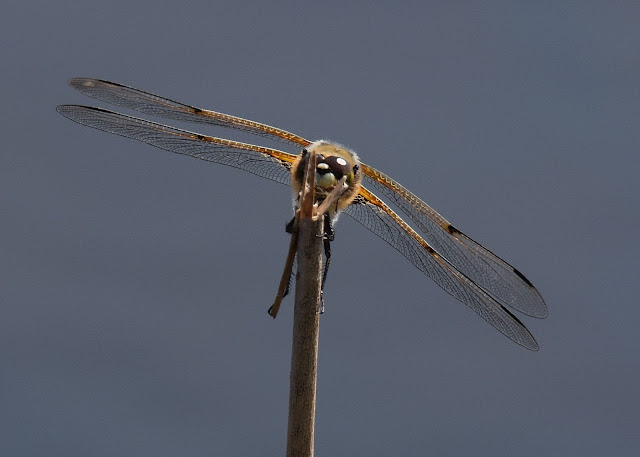 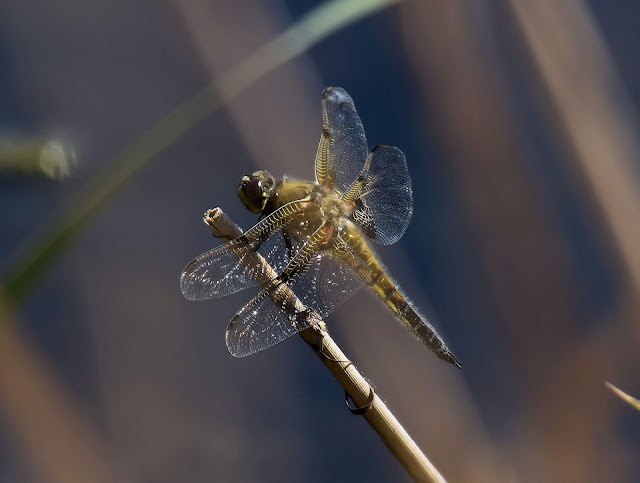 To amble is to walk in a relaxed state enjoying a favoured pastime.
slow down, theirs plenty to see.