Were quite lucky here in Kent, Chalk downlands abound, why it's taken me so long to discover these reserves is beyond me.

I 'm making more effort this year to visit our Kentish wildlife sites, especially those that I have never visited before, new sites inevitably bring new and unseen wildlife sightings, these chalk Downlands also make for an exhilarating walk in some beautiful countryside.

With this in mind it was back to Darland Bank to search for Butterflies, those of the blue variety, a speciality of these chalk grasslands. I was a little to early for the Chalkhill Blue, I was told to come back in July.

As expected my first Blue Butterfly soon appeared in the form of a Common Blue, as its name suggests the most common blue butterfly seen on these downlands.

As I walked along the scruby border at the bottom of the hillside, my next blue Butterfly made an appearance the Holly Blue.

Walking back up onto the grassy slopes, a new Butterfly for me, the Small Blue our smallest Butterfly in the country, fiesty little Butterfly saw it on a few occasions sparring with passing Common Blues, also strangely not blue but a dark brown, the male has a scattering of blue scales mixed in with the brown. the underside of the wings is reminiscent of the Holly Blue above.
These all look like males, the females have no blue on the upper wing surface  I believe. 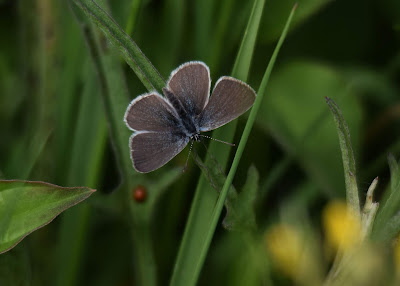 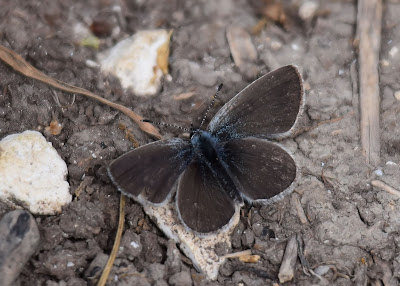 And then the Butterfly I really wanted to see, and one that has eluded me for years, mainly because I haven't been visiting the right places. This one is quite rare though, the Adonis Blue. 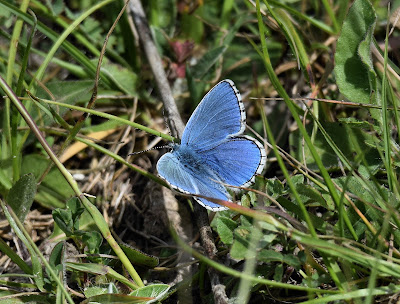 These are quite distinctive when you see them, the blue is very bright almost metallic looking, and the black veins pass through the white fringe of the wings giving a chequered appearance. Pleased with seeing two individuals on this visit.

Other interesting sightings made as I walked the paths along the hillsides where the many Man Orchids were showing everywhere. I noticed this Crab Spider trying to blend into the background.. they can change colour to yellow, but this does take some time. I didn't see many insects visiting the Orchids, so he may have a long wait. 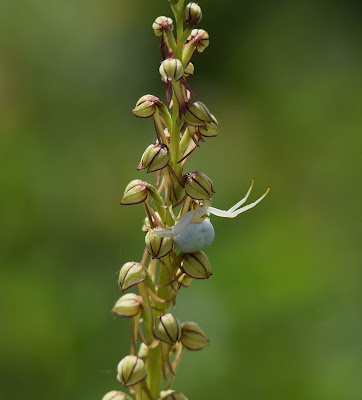 Plenty of Bee's on view,with one lucky observation of the Brown Banded Carder Bee the rarest of the three carder Bees found in the country and known to frequent this site. I did ask for confirmation from the  "UK Bees, Wasps and Ants site and got a positive response., well pleased with that sighting.

I think that yellow band in front of the white tail could indicate that this is not the White tailed Bumblebee I first thought but Bombus vestalis, the vestal cuckoo bumblebee. 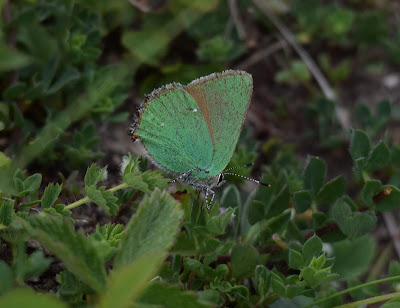 A mystery Orchid about to bloom next to a Man Orchid, probably Pyramidal or Common Spotted.

A return visit in July for the Chalkhill Blue is definitely on the cards.
Posted by Merlin52 at 17:59 No comments:

As I was pretty close to Denge woods and the Bonsai Bank after visiting P.G.D. thought I would have a quick look to see how the Lady Orchids had developed, only a few were showing on my last visit at the beginning of May,
they were now looking really good and seemed to be everywhere on the Bonsai Bank. 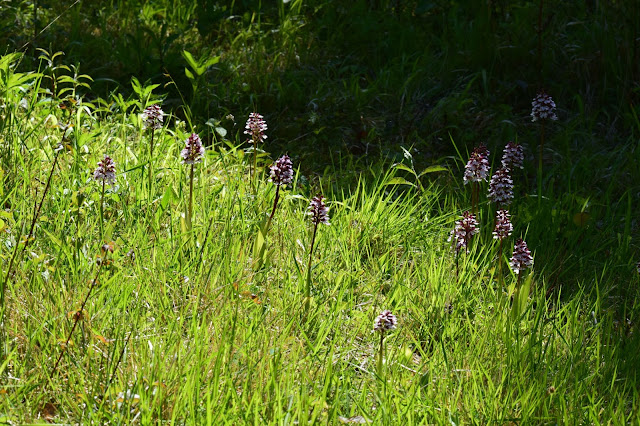 I was also looking for Butterfly Orchids seen here a few years ago, couldn't find any, but should be showing soon. I did come across two White Helleborine and a few Common Twayblade.


A couple of day flying moths were seen the Speckled Yellow shown below.

Plenty of Duke Of  Burgundy Butterflies on show, more than I have ever seen, thanks must go to the volunteers who keep the site to there liking.. 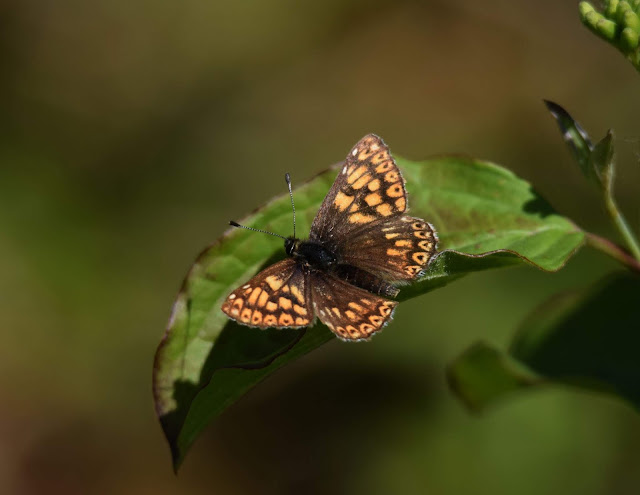 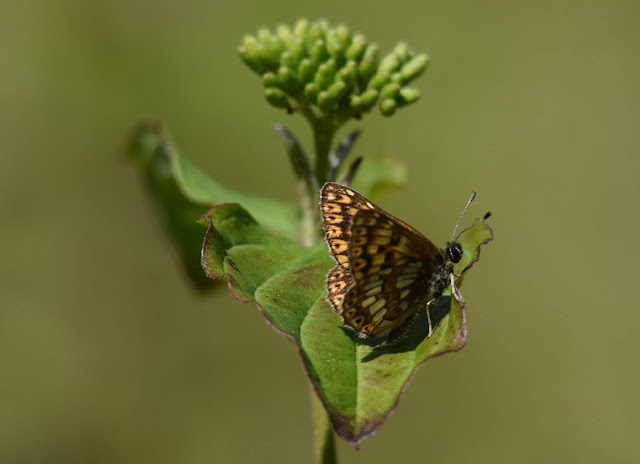 Another two Orchids to add to my Orchids seen list.


Decided to visit Park Gate Down in the depths of the Kentish countryside today, another reserve on my 'to visit' list for 2019. Once again this was one of those car journeys where my 'sat nav' was essential for directions, although it's always a bit worrying when you have been travelling down a single track road for some time, then a grassy central reservation appears down the centre of the track giving the appearance of an old cart track. fortunately no oncoming traffic , and it was with some relief  when I pulled into the small lay-by near the entrance to the reserve. 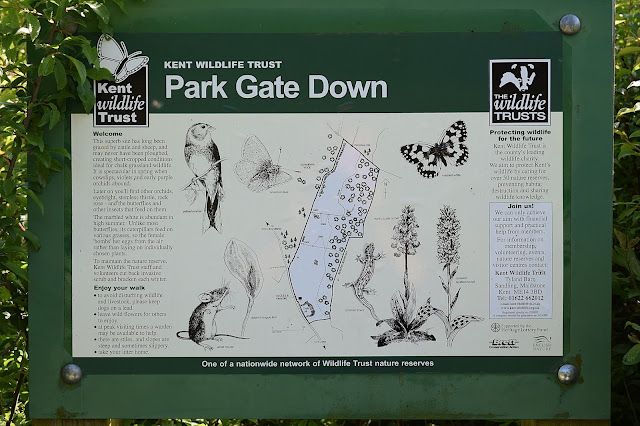 Park Gate Down has been renamed of late and is now known as the Hector Wilks Reserve after an English botanist and conservationist who was involved developing the reserve from its early stages, a fairly small reserve but set in beautiful countryside setting. 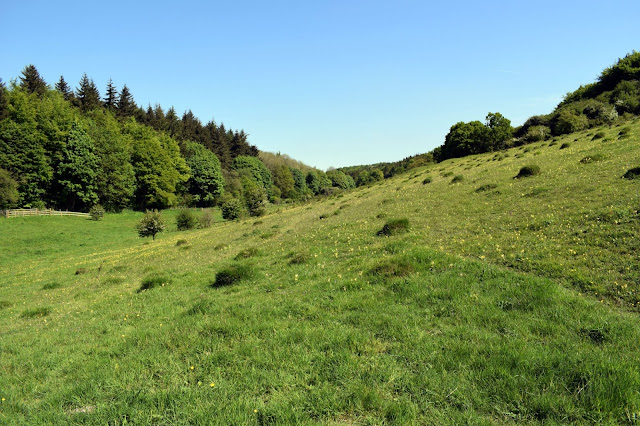 My main area of interest were the flowers, in particular the Orchids known to grow here,  one of three sites in the country where the Monkey Orchid can be found amongst others, hopefully a Butterfly or two. ( the flying kind )

The reserve is set on a some fairly steep chalk grassland, but the footpaths are well marked.
It wasn't long before I picked out the Orchid I was interested in, just coming into bloom and one of the best looking native Orchids I have seen.
There were also  Early Purple Orchids showing but way past their best, a few Common Twayblade, this site also boasts other Orchids growing here, Late Spider Orchid, Musk Orchid, Lady Orchid, Pyramidal, Common Spotted, Bee, up to twelve different species, I could only find three but I am a Orchid novice, the grassland was covered in other wildflowers unknown to me. I must try and learn some of these. 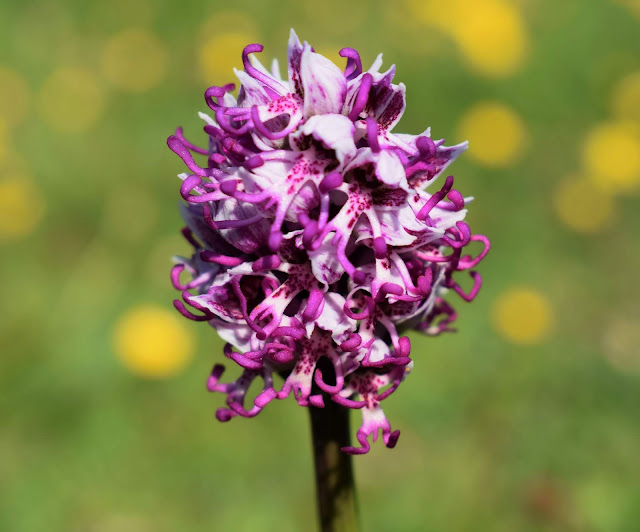 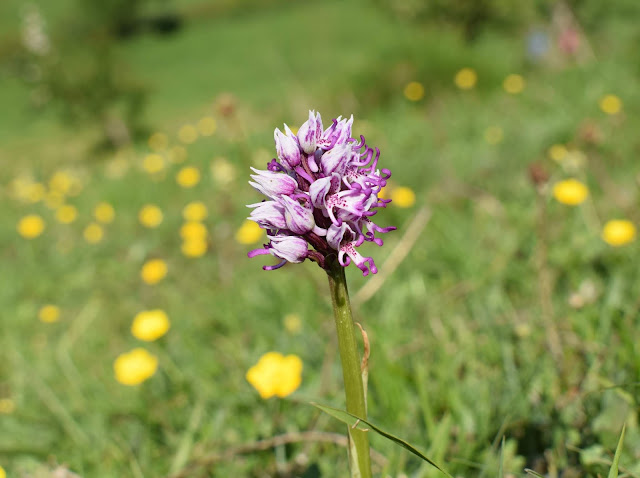 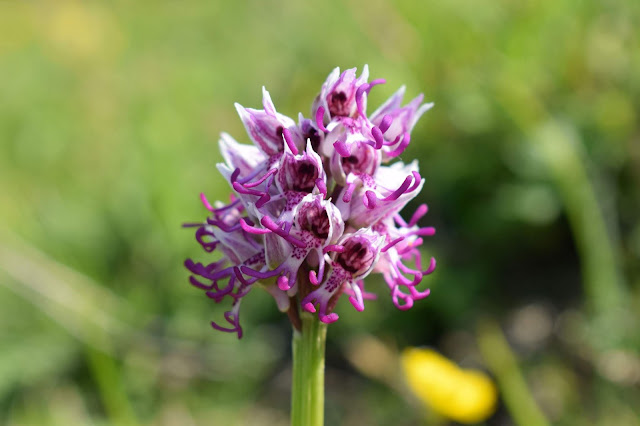 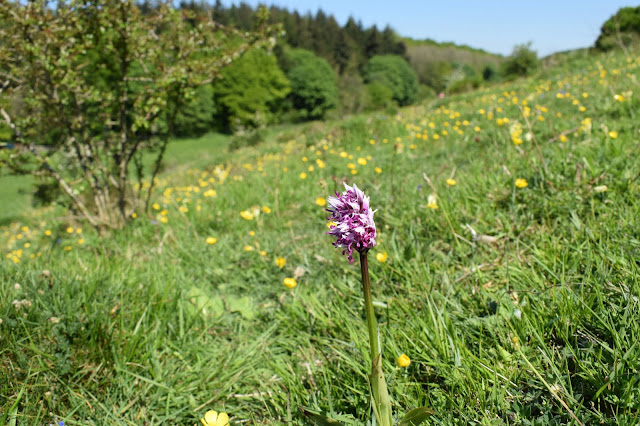 Butterflies on show included one possible Wall Brown but moving very fast, Brimstone, no sign of any Chalkhill Blues or Marbled Whites on my visit. Lovely reserve to visit in the right season, May to June, must try and fit one more visit in before season ends.
Posted by Merlin52 at 10:27 No comments:


Whenever I'm passing through the Isle Of Sheppey I take the opportunity for a drive down the entrance track to Kingshill Farm and the old Elmley RSBP  reserve at the end. unfortunately it seems many other people do the same as there were a long stream of cars snaking there way along the track, not sure how long the new landowners will put with up with this, but people have done it for years, there's always a good chance of some close views of marshland birds, maybe a Hare along the way,  as long as you stay in your car, hopefully no harm is being done to the local wildlife, so while the opportunity is there I joined the steady stream of cars across the Marsh.

I think in future, I'll only do this if visiting the reserve, I can't stand the guilt for some reason.

This was the  reserve that first introduced me to the joys of Birdwatching, back in 1986.
A sad day when the RSBP left the reserve.

Back to the birds, the usual birds seen along the track are usally Redshank, Lapwing, Skylarks, wildfowl, Herons, Harriers and Short Eared Owls in the right season.

Today was no exception, Redshank, Lapwing and Oystercatchers with chicks, Skylark were there together with at least three pairs of Yellow Wagtail, the highlight of this little 'sortie'

I seemed to have missed the Yellow Wagtails over the last year or so, wrong place, wrong time I expect,so watching these hunting flies and insects in the grass alongside the track was a welcome sight. 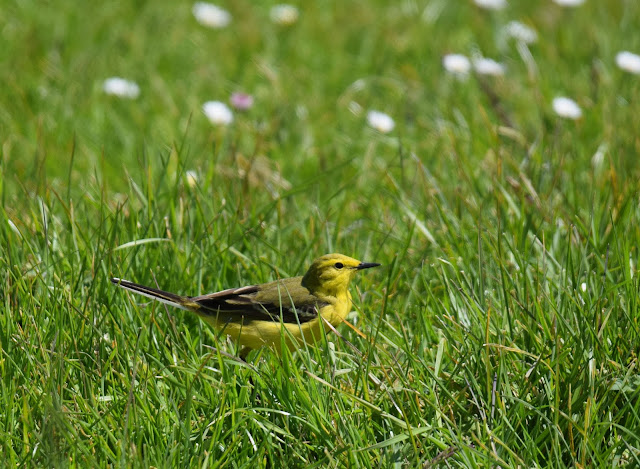 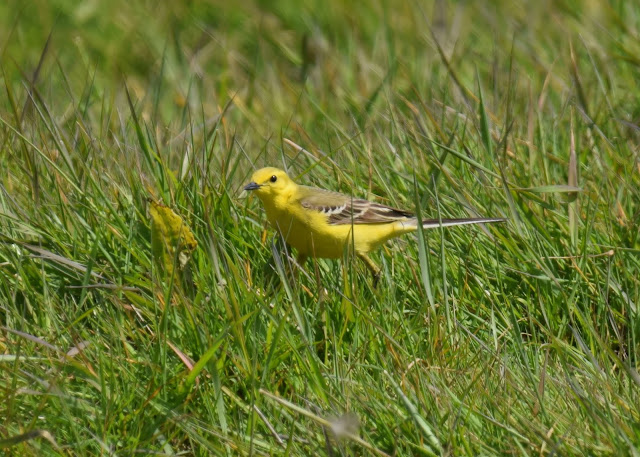 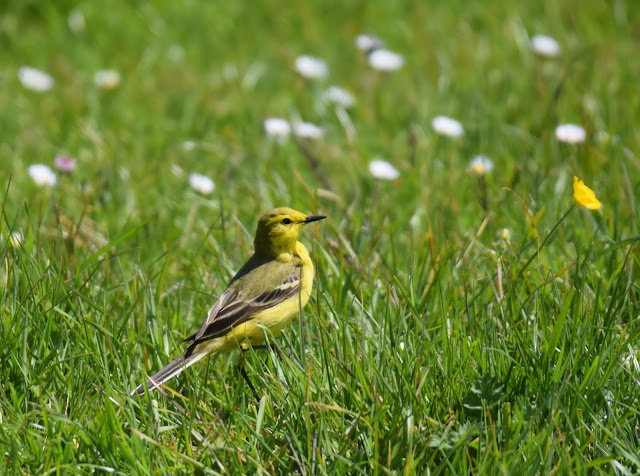 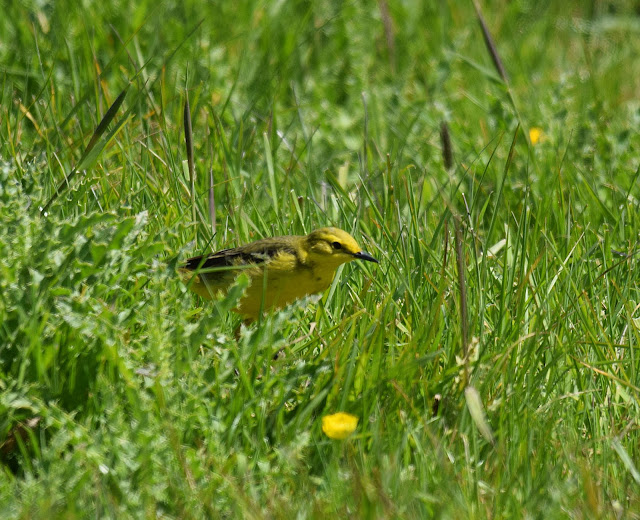 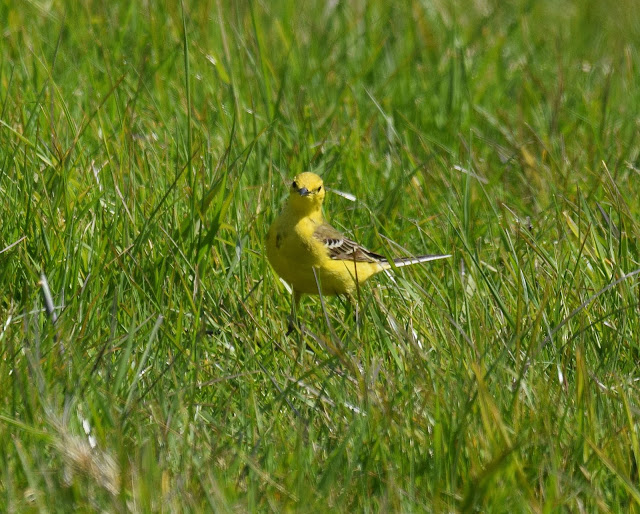 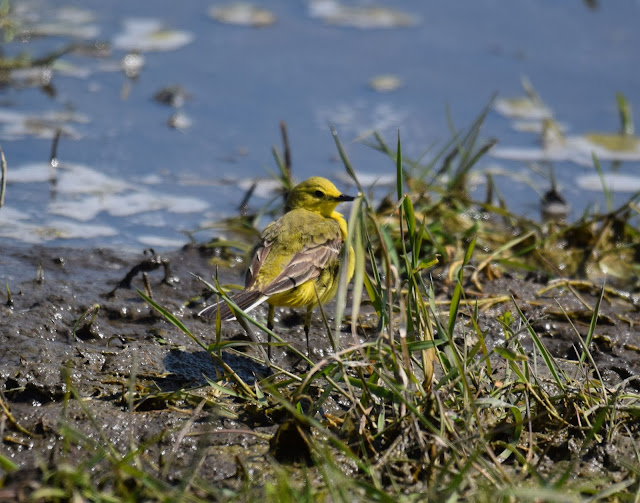 Exploring new sites in Kent has led me to this lovely reserve at Darland Banks, not far from Gillingham and looked after by Kent Wildlife Trust. I was hoping to find another Orchid, a speciality of this site and maybe a new Butterfly or two. Chalkhill Blues reside here as does the Brown Banded Carder Bee, both would be nice to see. 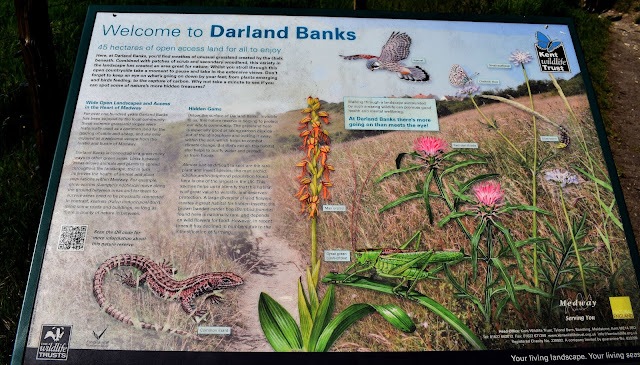 There's a small car parking area close to the entrance which is always a plus. as you enter the reserve the above notice board describes the area and what may be seen. The first impression you get are the wonderful views across the valley and hills, lots of grassland to explore with huge 'big sky' vista.
The landscape seems very typical of most of the interesting Orchid sites I have been visiting of late.

Its no secret that this site has one of the biggest Man Orchid populations in the country, a fact I was not aware of when visiting, I was preparing myself for one of those 'needle in a haystack' type searches. 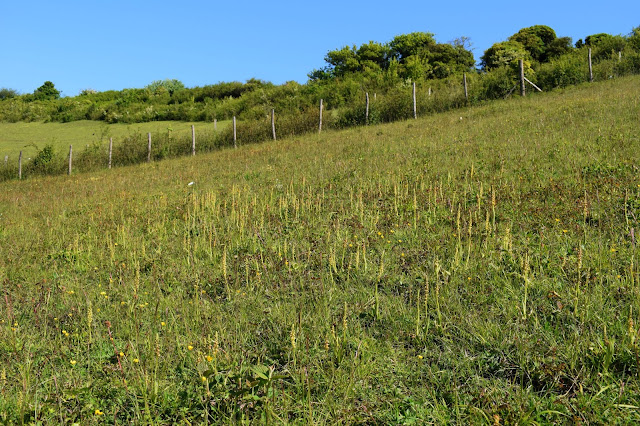 There are many areas like this absolutely covered in Man Orchids, a closer inspection is required to appreciate the beauty of this native Orchid. 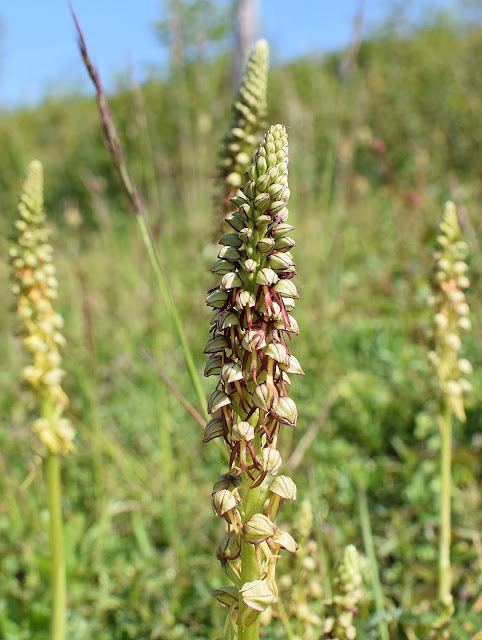 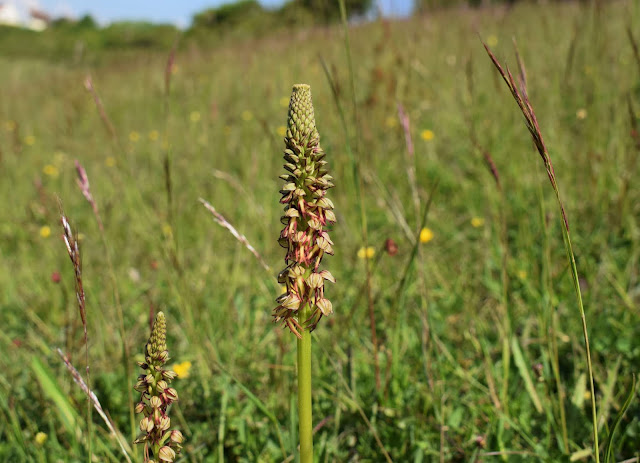 Its quite easy to see why they are so named, not such a needle in the haystack this time.

No luck with the Brown Banded Carder Bee,  another visit required in a few weeks I feel.