As we move into peak Dragonfly watching season I couldn't resist another visit to the fishing lakes at Shorne Country park to see if I could add a few more species to my list, as I mentioned in a previous post, up to nineteen species have been reported at the country park,  I managed to see just six species on my last visit and only distant views of  a chaser species.

So with the temperatures rising, the sun shining,  and time on my hands, my search began.

The matted weed shown in the foreground of the photo above was particularly attractive to the female Emperors, first and largest dragonfly to be seen  today. couldn't get a decent flight picture but a nice photo of the Emperor female oviposting . 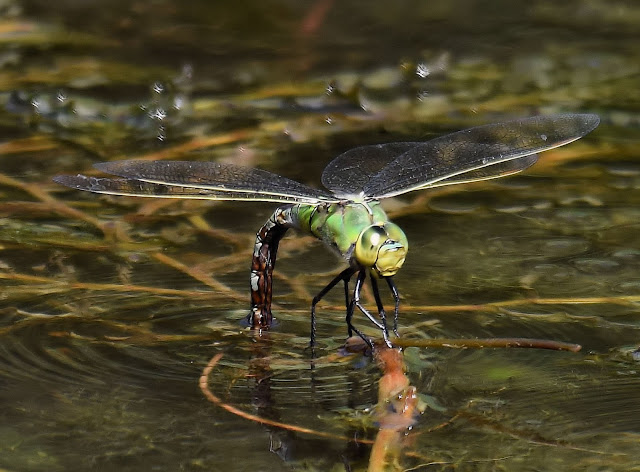 Still good numbers of Black Tailed Skimmers, by far the most numerous Dragonfly species around the lake. the males still partial to waiting on the lakeside banks, where they dart out to chase off another male, or hopefully a passing female. 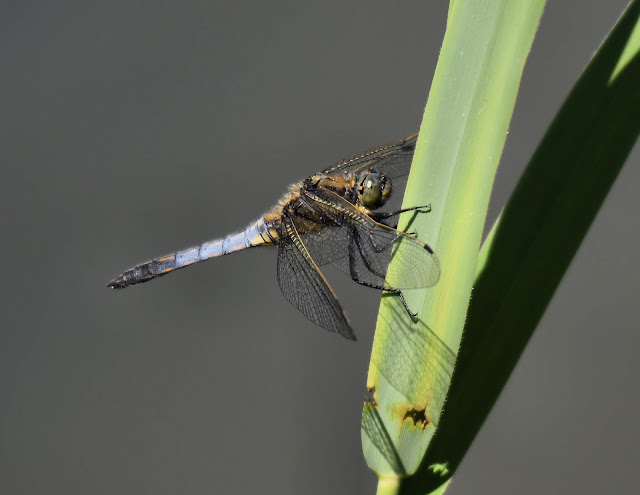 On this visit I noticed that a Common Darters were making an appearance around the edges of the lake, none settling for a photograph though.

Then I stumbled on the Dragonfly I was looking for, as always in my case, common and widespread,
but a lovely looking Dragonfly all the same, typically, this one was on its favoured perch where it kept returning too, allowing photograph or two.

This particular individual appeared slightly different from the norm, with the wingtips darker. a quick look in my field guide where it was noted as a Four-spotted Chaser - the colour form praenubila,first time I have come across one of these. 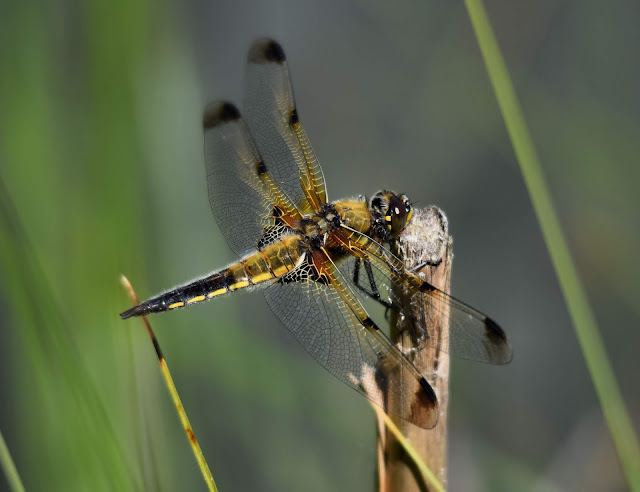 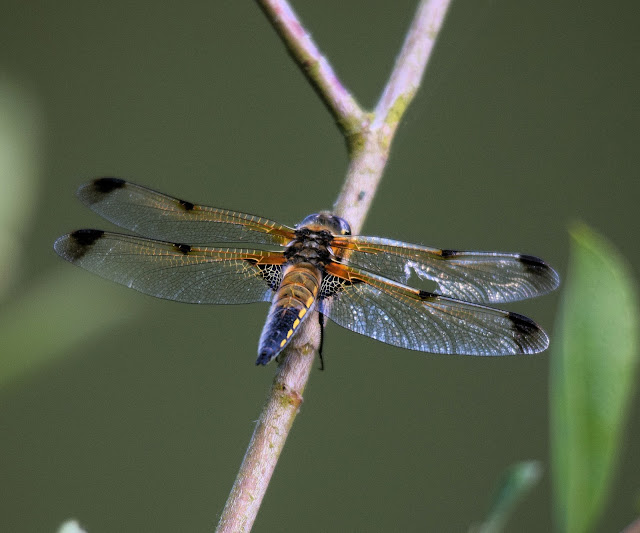 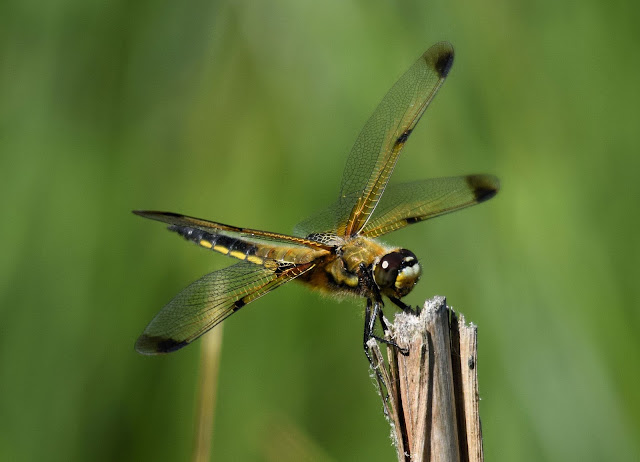 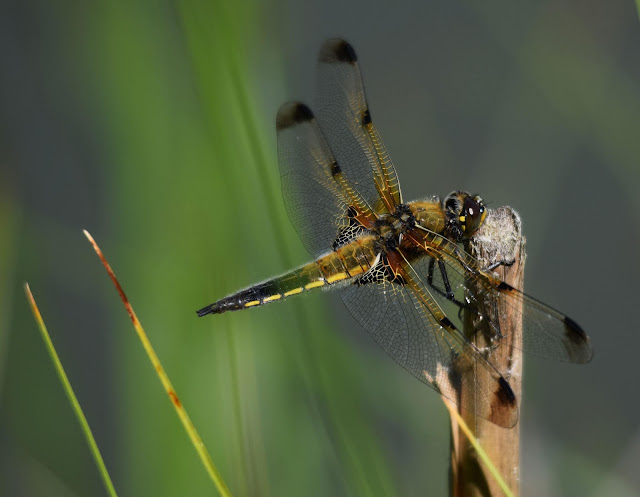 Damselflys were much the same as my last visit, Red-Eyed Damselflys guarding there chosen lily pads, Azure Damselflys attached in tandem to the females oviposting in the weed mats, a few Large Reds and a Blue Tailed Damselfly.

A walk through the woodland revealed a Banded Demoiselle and on the small pond at the back of the woodland cafe a family of Pied Wagtails hunting for insects in the grass alongside the pond appeared to have caught a Emerald damselfly. 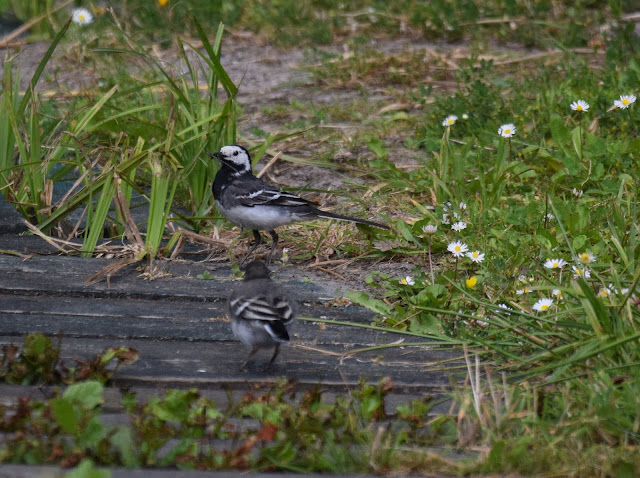 So my Common and widespread list of Odonata species at Shorne stands as follows :-


The waterfall that carries freshly filtered water back down to my fish pond is a relatively small affair, not really sure if  I can call it a waterfall, one of those preformed fiberglass jobs, but with a few years weathering, some strategically placed plants,even some moss making a determined effort to soften the edges have given it a relatvely authentic look, however the garden birds seem to love it.

Fortunately our swinging  garden chair has been placed in a position where I can watch the birds at the pond, without disturbing them,  although to be honest I think also they  have grown accustomed to me hanging around the garden and just get on with there thing.

The favoured part of the waterfall for the House Sparrows and Blue Tits is a lower shelf just before the water falls into the pond, The blackbirds, Starlings, Robin and Dunnock like to bathe out of sight at the top of the waterfall under the overhanging vegetation. 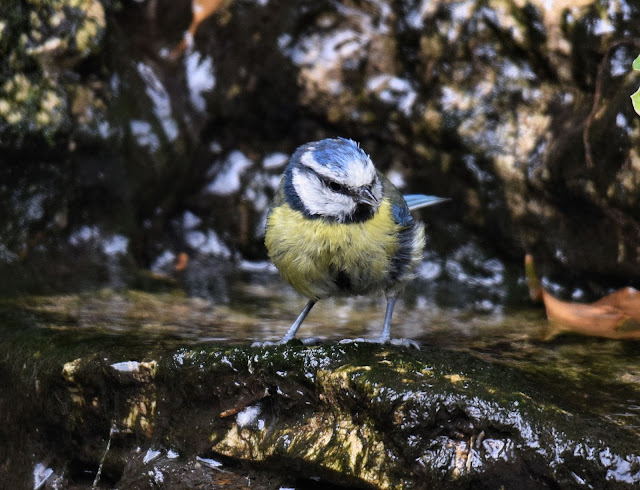 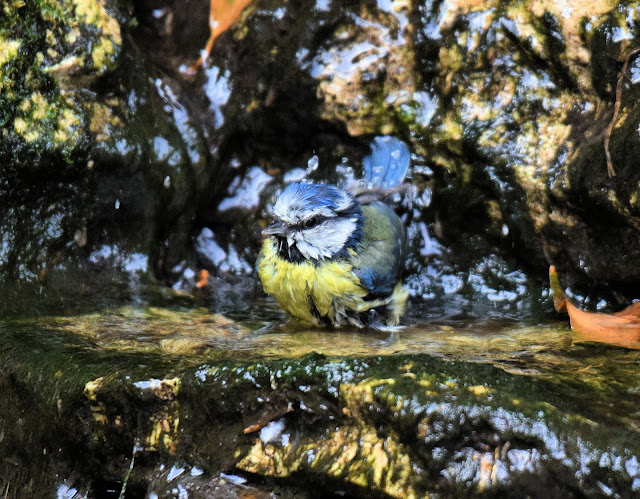 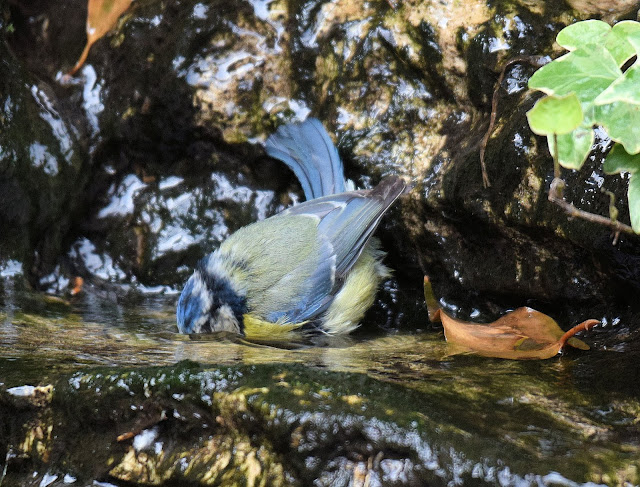 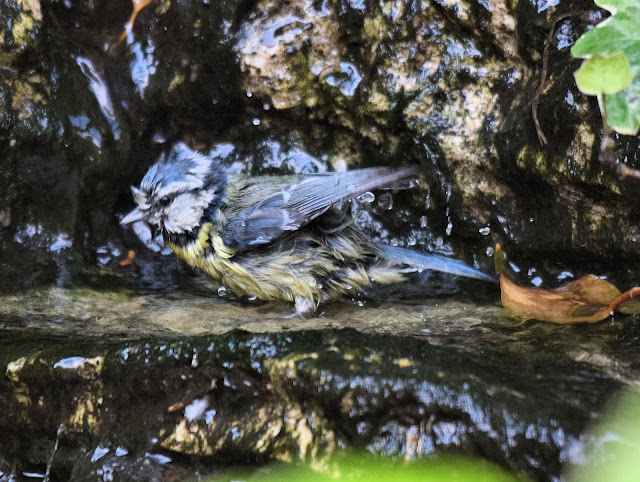 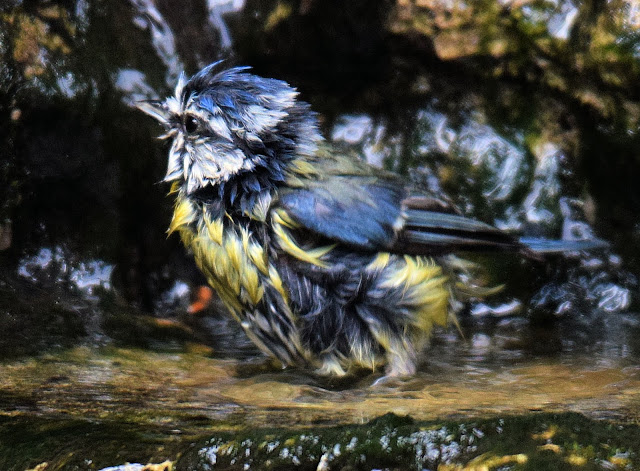 Always amazes me that after a good soaking they still have the ability to fly off up into the garden trees.

The House Sparrows on the other hand appear to be attracted by a bathing bird, either waiting on the sidelines to take their turn , or just jumping straight in for a communal bathing event. sometimes not always that amicable. 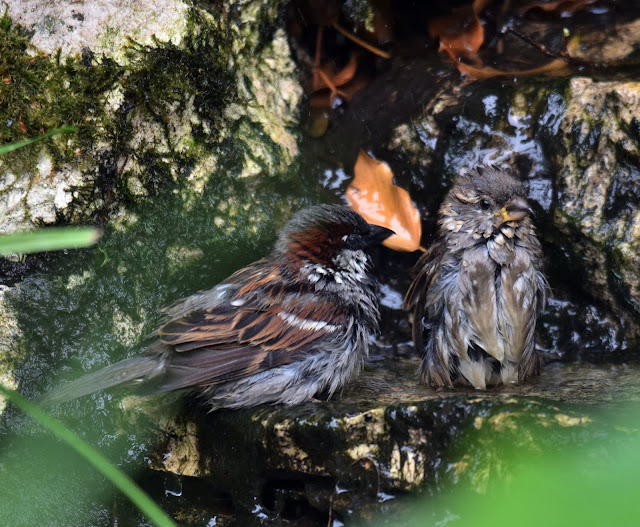 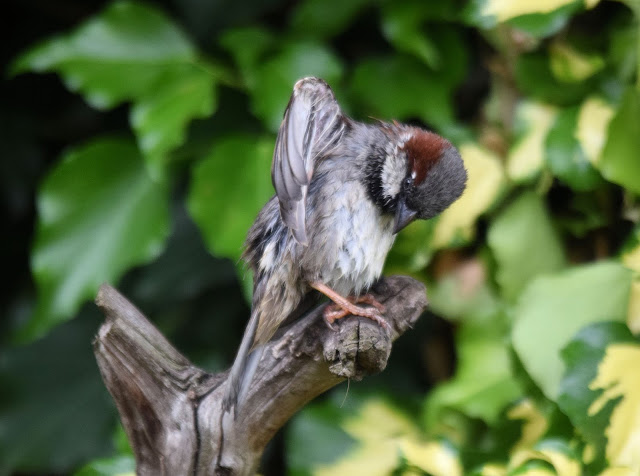 The local Blackbirds use the waterfall for collecting wet leaves I expect for lining their nest which is hidden somewhere in the ivy. 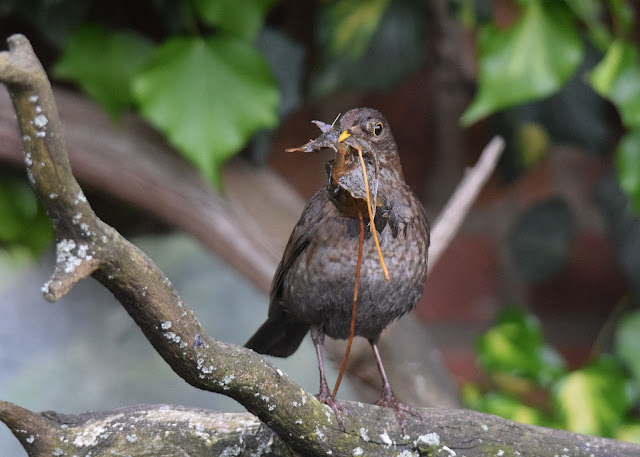 There always seems to be a Dunnock skulking around at the top of the waterfall where I suspect  they bath in privacy. 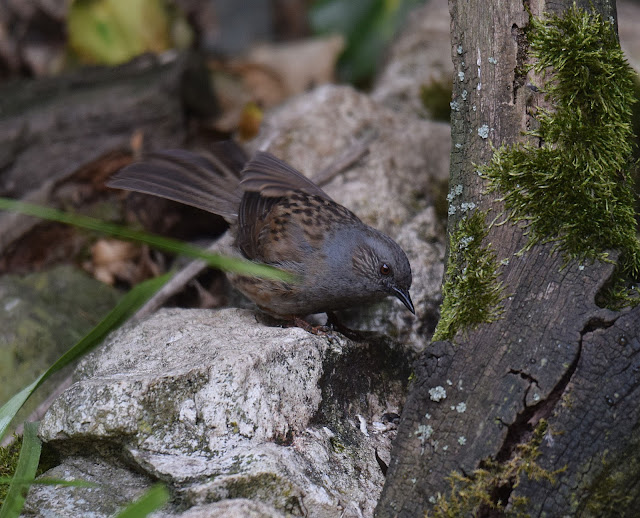 Always a few photo opportunities around the pond, thankfully the Heron has left my few remaining fish alone this year, the only unwelcome guest to the garden. 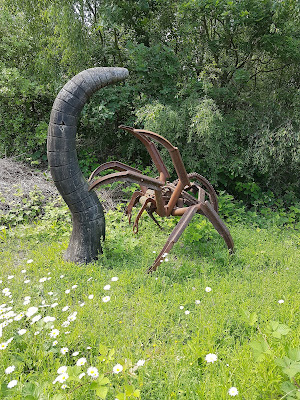 Shorne Woods Country Park has always held many happy memories for me, when my children were young they were encouraged to participate in the Nature club and there summer " Action Dragonfly " events, all to no avail it seems, as they have little or no interest in nature now, but good fun at the time. the country park was still in its infancy then, twenty years later, their have been many changes, the park has grown in acreage, a massive car park with the now obligatory parking charges,
a state of the art cafeteria, albeit very ECO friendly, a trim trail,  a children's playground, Orienting trail, and some nice natural sculptures scattered around the park.

I have seen many photographs of this sculpture, now I know where it resides.

The two fishing lakes remain much as they always were, surrounded by woodland relatively quiet and serene. Water Lilies have always been spectacular, and the dragonflies and damselflies always around in good numbers. with up to nineteen species being reported.

On a warm sunny afternoon, my new grandson was introduced to the world of nature like his mother before him.

He was more interested in the children's play area, but I have high hopes that an interest in wildlife and natural surroundings will develop.

I took the opportunity to reacquaint myself with a walk around the fishing lakes, I was not disappointed. managed to get some photographs, although all hand held shots.

There were several Emperors patrolling up and down the lakes, I particularly liked this shot of a female Emperor dragonfly ovipositing in a mat of weeds with a tiny Azure Damselfly looking on, and then cheekily landing on the female Emperor. shows off the size difference perfectly. 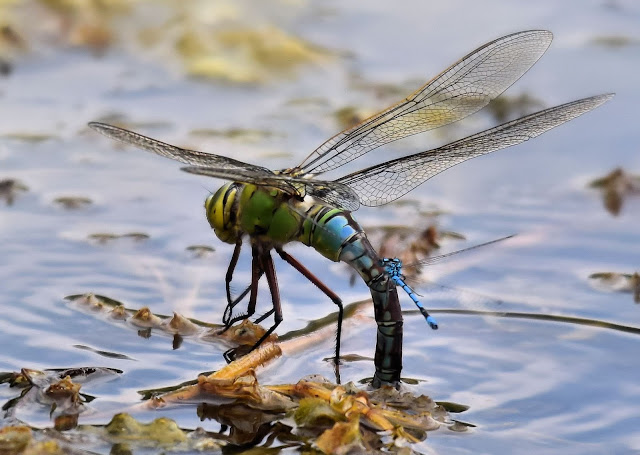 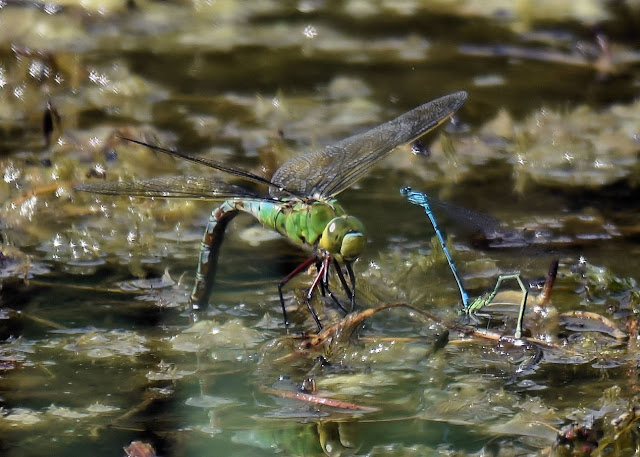 Many of the Lily pads near the edge of the lake had  Red-Eyed Damselflys and the chance to photograph another damselfly although not as scarce as the Small Red-Eyed Damselfly. nice to see in such high numbers. 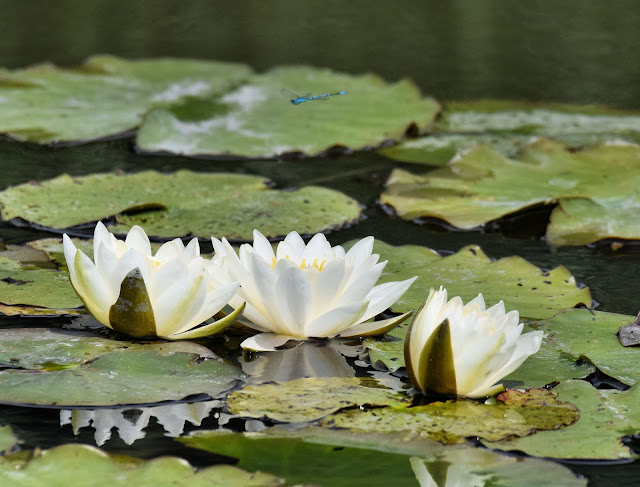 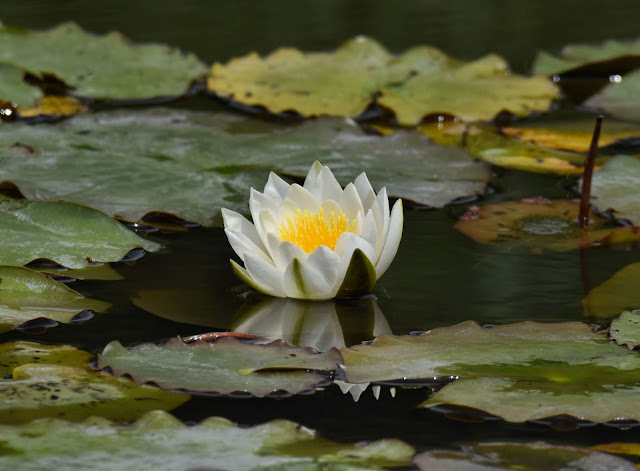 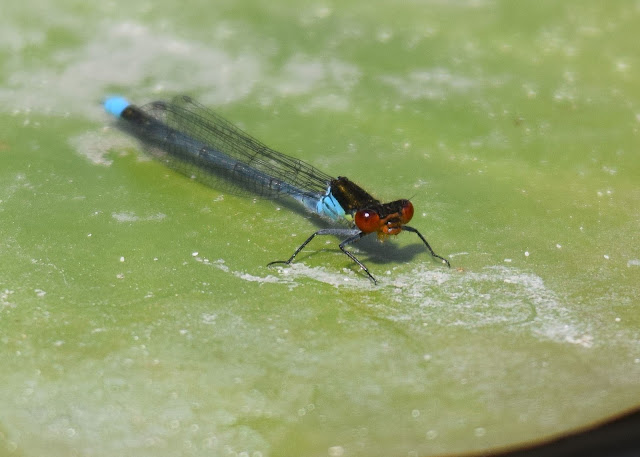 I had noted the presence of a Few Common Spotted Orchids which I was going to photograph later when I came across the first of two Bee Orchids, been a long time since seeing my last Bee orchid.


All around the lakes Black Tailed Skimmers were staking out the territories, they seem to like sitting on a sunny bank on the edge of the lake waiting for a female to appear, males easily outnumbering females or maybe they were just lying low. 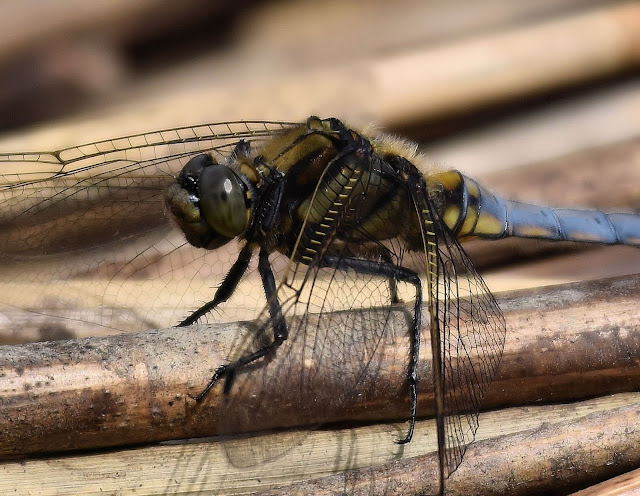 Another strange looking Common Spotted Orchid on the edge of the lake.

Another Damselfly which I do not see a lot of was this Large Red Damselfly, at least three  individuals seen here. 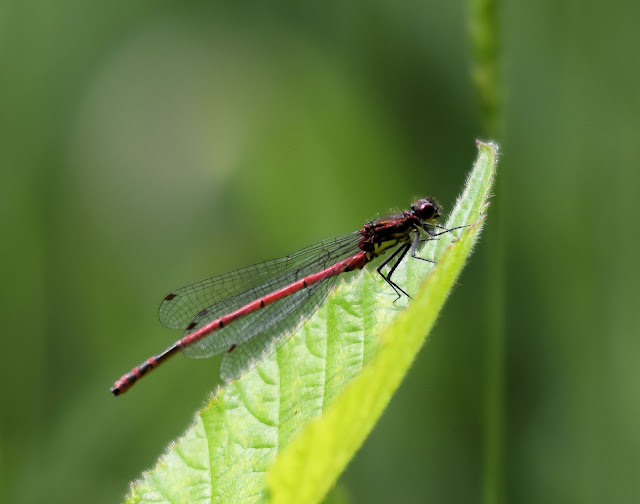 Plenty of waterside plants  to admire, including these lovely yellow flag Iris. 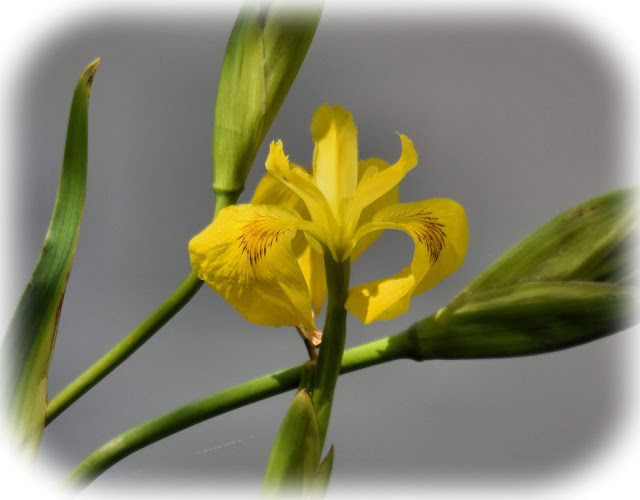 My final Dragonfly of the afternoon was this Four-Spotted Chaser, these were always on the move, just managed to get this record shot

Finally another Orchid found just outside the country park during my dog walking duties, at least eleven spikes of the Pyramidal Orchid growing on waste ground, seems appropriate to display them here. 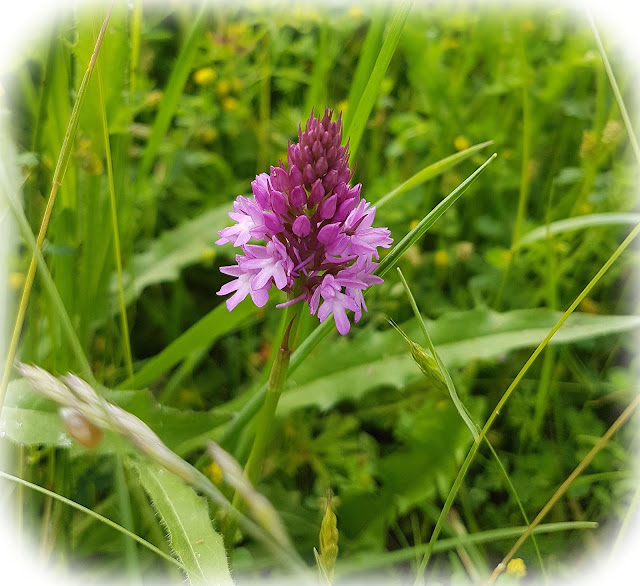