Killer in the Shadows !!!


As I glanced out of the window to check the bird feeders, there appeared to be a distinct lack of birds, quite unusual as there always seems to be  something going on around the garden. Then something caught my eye in the shadows of the Laurel bush. A closer look revealed a beautiful male Sparrowhawk lurking in the shadows, possibly waiting to ambush some unsuspecting bird.
These male Sparrowhawks specialise on hunting the smaller birds, finches,tits,sparrows and the like, perfectly adapted for urban hunting. 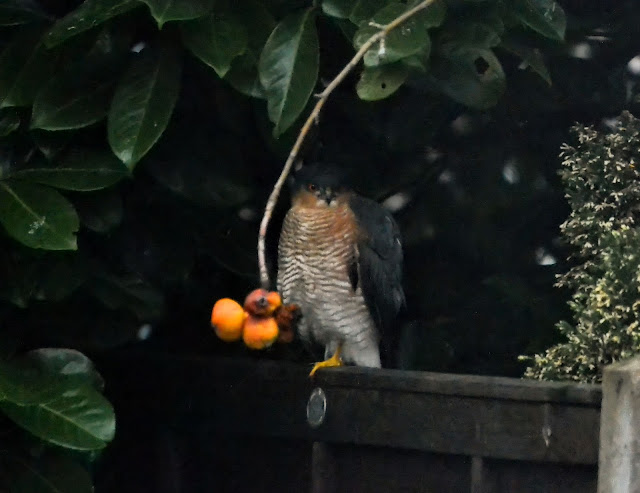 He remained in the shadows for several minutes, turning his head at times scanning the garden for a meal, the garden remained eerily quite, a blink of the eye and he was gone. 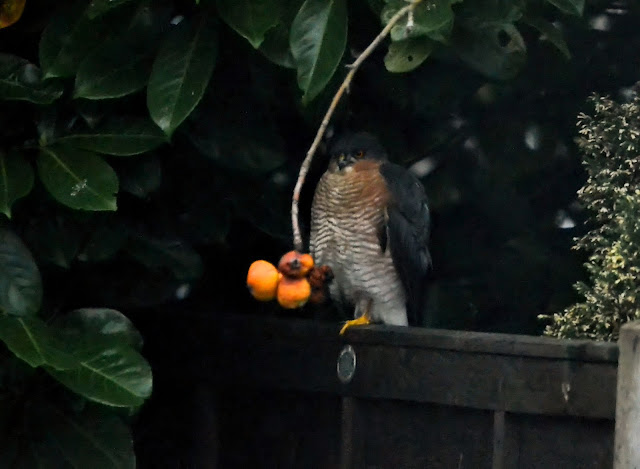 Being born and bred in Dartford , that mythical bird in my experience the 'Dartford Warbler' always attracts my attention when ever I hear its name mentioned in birding reports.

This very attractive warbler first identified in Britain, it is said, after a pair were shot in Bexley heath near Dartford in Kent.

Identification was attributed to John Latham in 1773, an English physician, naturalist and author.
He discovered and named three species of birds after local areas – the Dartford Warbler, the Sandwich Tern and the Kentish Plover, I have often wondered how these birds got their names with Kentish connotations, now I know.

Fate of the Dartford Warbler was very tentative, their skins and eggs were sought by collectors, loss of heathland through various reasons, all led to their downfall, and sadly there extinction from the Dartford area in the early twentieth century.

As a young boy I was totally oblivious to this fact, no wonder I never saw one.

It was not until February 2000 that I got my first brief glimpse of a Dartford Warbler, it was associating with a couple of Stonechats at Lade Gravel pits near Dungeness. a very special sighting for me, and one that I still remember quite clearly.

Fifteen years later, 2015 and the report of a Dartford Warbler, possibly two at Rainham RSPB  just across the river from Dartford, was an irresistible temptation, I had to go and look for it.

My first attempt was unsuccessful, I found the right area where the Dartford Warbler had been seen associating with stonechats, plenty of Stonechats to be seen but no Dartford Warbler.

Feeling slightly deflated, I moved off to have a look around the reserve, and hopefully see a Short Eared Owl, no such luck none to be seen. Compensation in the form of a distant Water Pipit in front of the 'Shooting Butts hide ' was nice to see.

The following days the marsh was enshrouded in a thick mist, but a afternoon of sunshine lured me back to Rainham in the hope that the Dartford Warblers were still there.
I returned to the area near the Ken Barrett hide determined to see the warbler this time, conditions were good, lots of Stonechats around, only problem was the sun shinning directly towards the camera.
After a short wait, a glimpse of the warbler as it flew along the fence line, quickly diving for cover and disappearing.
Another short wait and there it was perched on some low shrub, long tail in the cocked position, dark red of its breast clearly visible, it was moving along through the scrub with two Stonechats, allowing me some good views before it flew off  low and disappeared into a clump of bramble.
Satisfied that I had seen the Dartford Warbler in all its glory I decided to walk around the reserve  in the hope of an Owl sighting.
As I set off , I final view of the Warbler perched high in the bramble, I tried to photograph it but the sun was against me, and it soon disappeared again.

At the far end of the reserve near the Dragonfly pools a distant Short Eared Owl could be seen.

Fortunately for me, it turned towards me and flew directly over me giving me some lovely views of this spectacular Owl.

Other interesting sightings on this beautiful winter's afternoon included a few Migrant Hawkers flying around a willow tree within the marsh area. The rear view of  Weasel as it bounded down the track away from me, and the head of the Barn Owl peering out of its Owl Box

I would of loved to have got a decent photograph of that Dartford Warbler, I may get another opportunity,a shame the warblers didn't fly across the Thames to Dartford, now that would have been a bit special.

I can feel a visit to Dunwich Heath in Suffolk,coming on in the very near future. where the chances of seeing Dartford Warblers are much better,