Bird species around the Pear Tree in the garden are starting to increase now that the bleak winter months are here. Fortunately I have kept the feeders full, Goldfinch  visit every day on the Niger seed feeders, usally flying in to the top of the Pear tree, and then swooping down  to the feeders, as winter creeps on they move on to the sunflower feeders.

No Greenfinch have been seen in the garden so far this winter, and just the occasional female Chaffinch.

Blue Tit, Great Tit are regular as you would expect, nice to see the Long Tailed Tit flock moving through the gardens, occasionally lingering on the fat ball feeders.

Ring Necked Parakeets are more regular now in the winter months feeding on the peanut feeders, taking advantage of the odd apples I have been placing out for them.

Wood Pigeons have started to feed on the Ivy berries although they do not look quite ripe at the moment, and my first view of a wintering male Blackcap on the Ivy seen on the 17th December was nice to see.

My tamed Robin seems to have moved on or possibly died, although a new Robin has taken over the Pear tree territory, much shyer, will be interesting to see if this one can be hand fed.

Blackbirds seem quite numerous around the garden, Starlings House Sparrows and Collared Doves all visit the feeders regularly.

The immature Sparrowhawk continues to visit the garden, still hasn't made any successful kills or none that I have witnessed.

I saw him sheltering in the leeward side of the garden Laurel tree during a particularly heavy rain shower. As the storm passed and the Sun came out he flew to the Pear Tree, facing into the wind he spread his tail feathers and wings and appeared to be using the wind as hair dryer, perched for some time in this position, I could see the wind ruffling his feathers as they dried out. 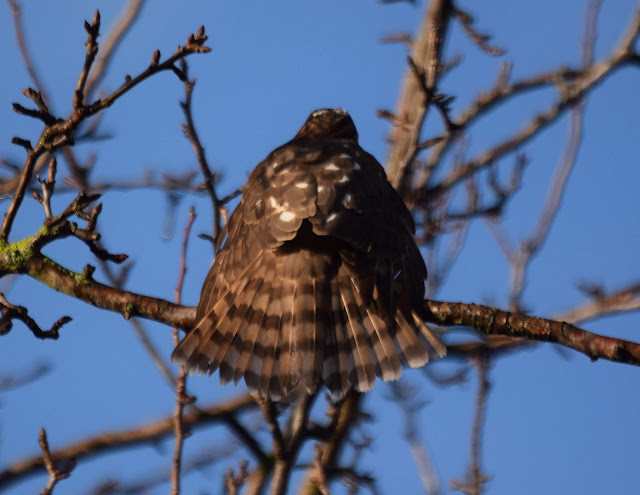 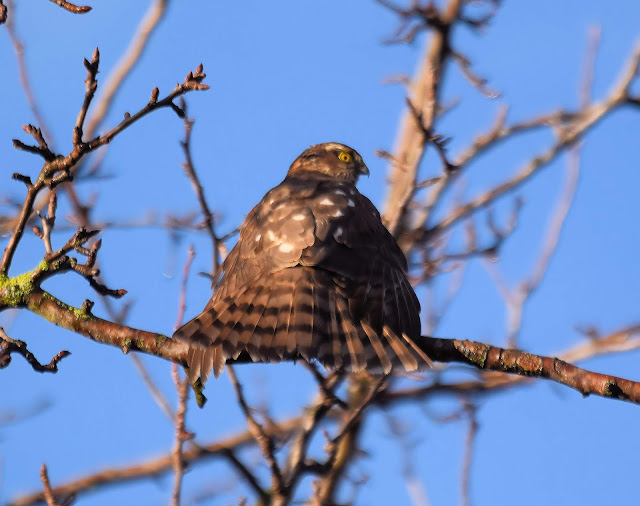 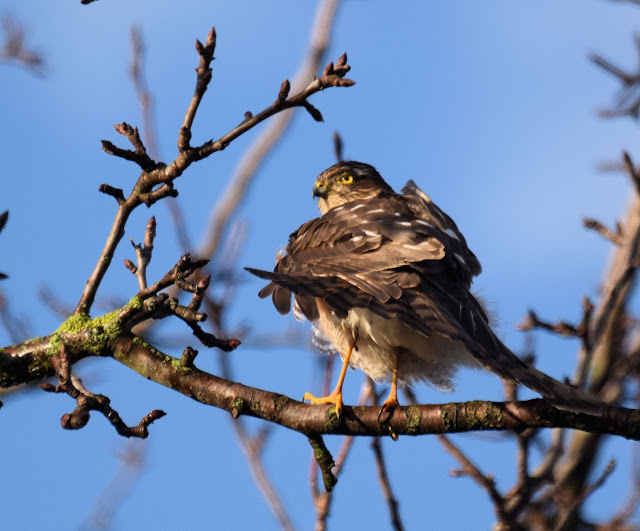 Once content that feathers had dried out he proceeded to Preen, paying particular attention to the tail feathers and feet. 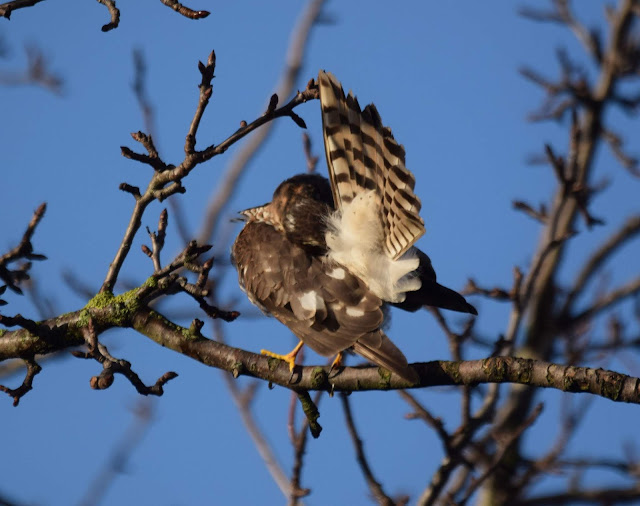 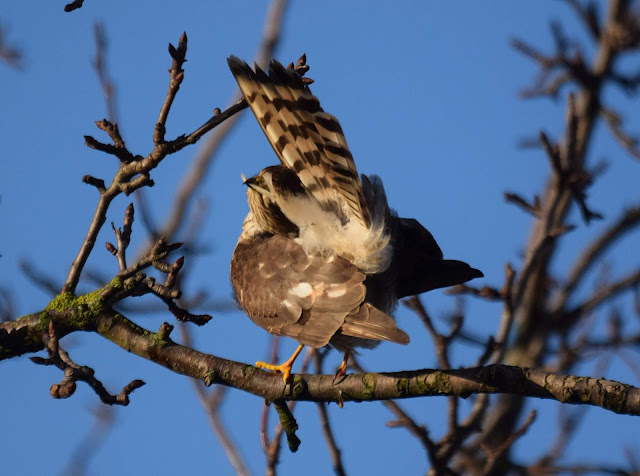 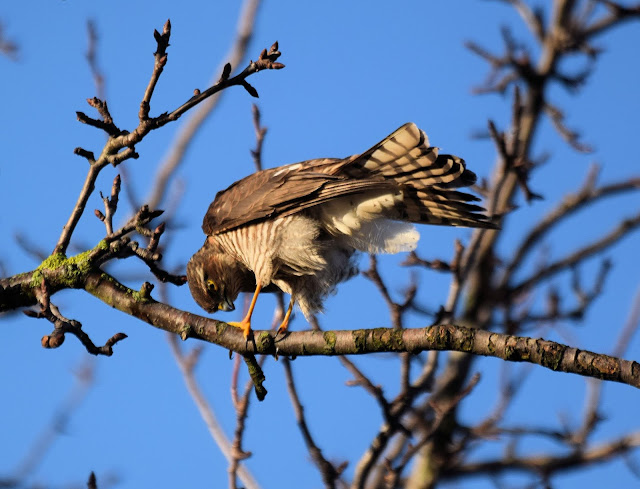 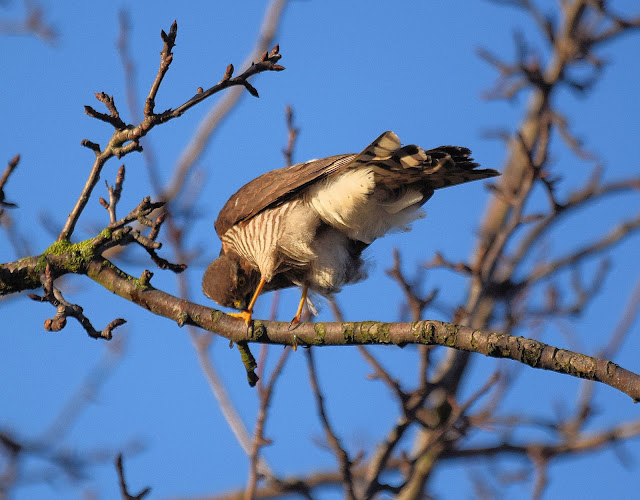 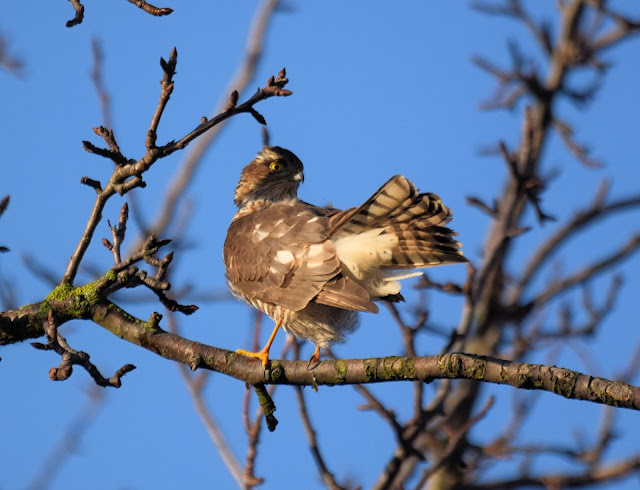 Usually the Sparrowhawks depart quite rapidly once they catch sight of you,  I know this one could see me as we made eye contact several times but he seemed secure enough to continue his feather servicing unperturbed by my presence. 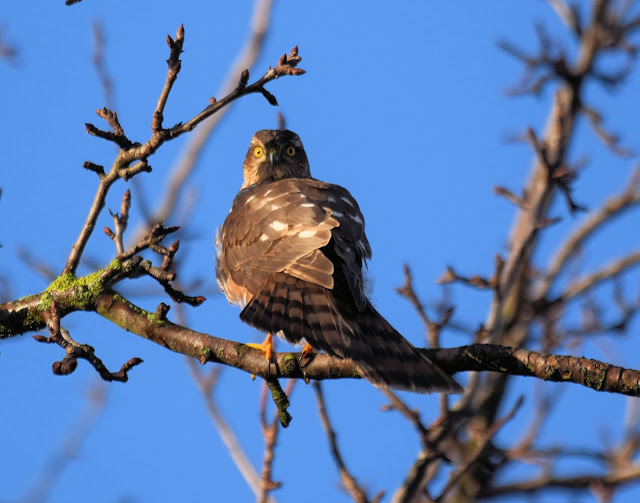 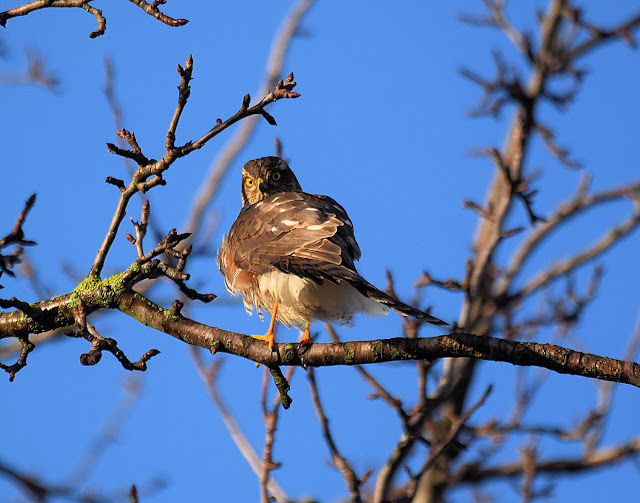 Although  the garden and feeders are firmly on the Sparrowhawks circuit, this hasn't deterred the
birds visiting the garden, so far this winter.
Posted by Merlin52 at 11:51 No comments:

I tend to look at the House sparrows that visit my garden as my own personal little House Sparrow colony, in reality couldn't be further from the truth, no nesting anywhere near my house or the pear tree, but each day they come in ever increasing numbers.
I know that they usally remain within a mile or so from where they were born, so they must be finding suitable breeding areas close by.

I'm not alone in noticing this increased activity around the garden, it always amazes me as I watch them feeding,  how they can instantly on mass, dive for cover, its not always obvious what has spooked them, fortunately there is plenty of cover nearby, where they remain hidden waiting for one brave soul to venture back out on to the feeders, which usally encourages the remaining  birds to venture  out on to the feeders.

The local SparrowHawks appear to have the feeding station firmly on there radar, a juvenile male has been making regular incursions into the garden, varying his approach, to date he has been unsuccessful.
I have seen him sitting in the Pear tree, in my mind studying the layout of the garden for his next attack. 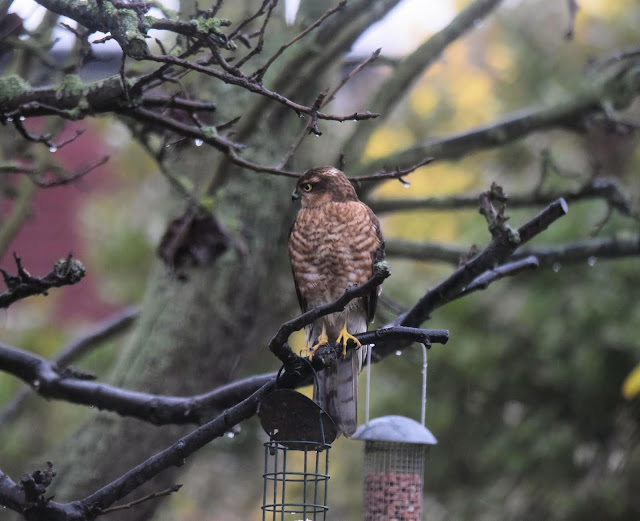 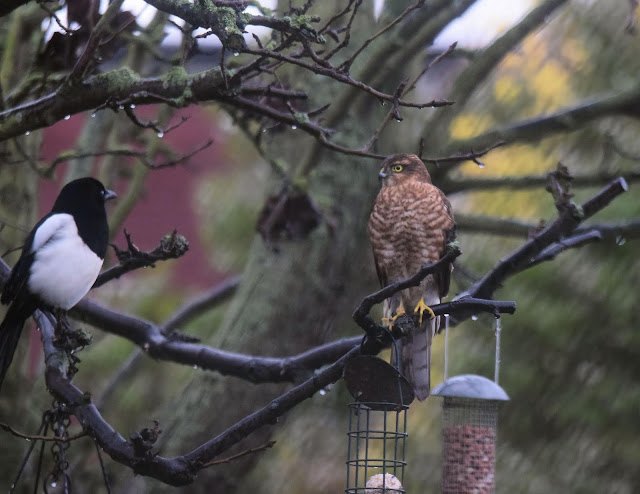 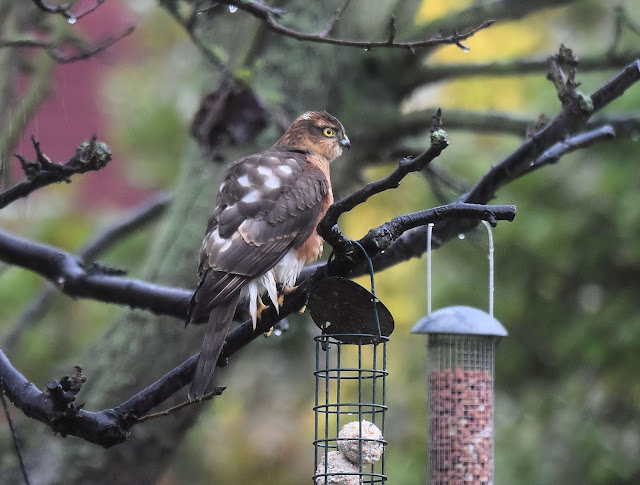 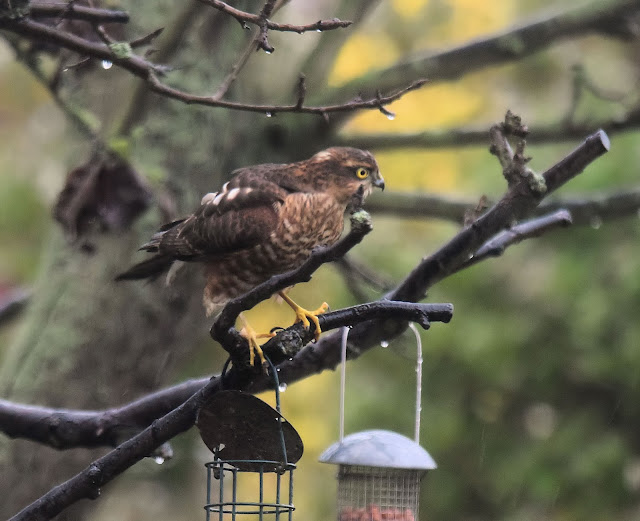 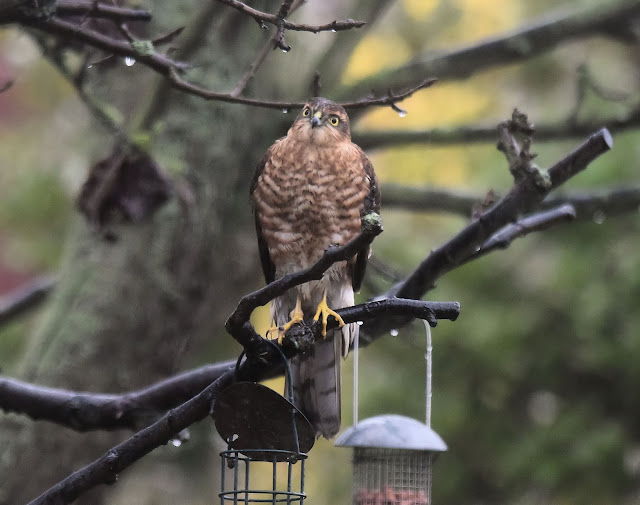 This young male is quite east to identify, so I'm pretty sure its the same individual, unless there are a number of young males with white spots across there back in the local area.

Caught sight of this adult male sitting on the fence the other day.its not looking good for the Sparrows they need to keep there wits about them. 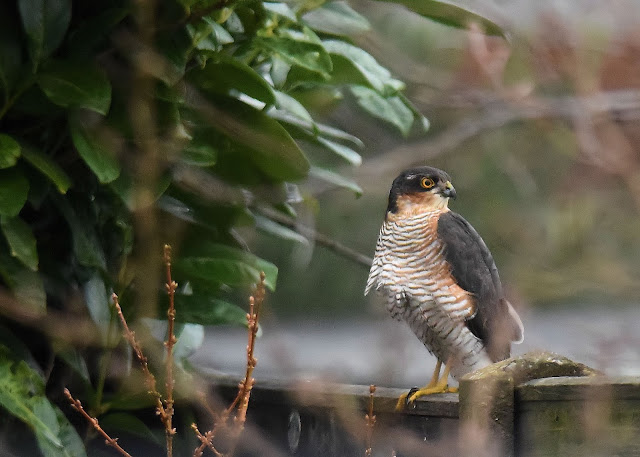 I think he's spotted me watching him. 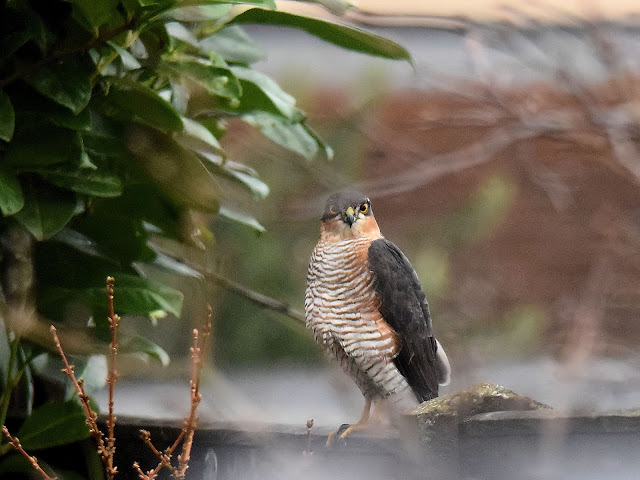