Valerian and the Hawkmoth !

Sitting in the garden as I often  seem to do these days, with plenty of time on my hands, I'm always on the lookout for a wildlife encounter, on just such an occasion, what I thought was a large Bumble bee of sorts, caught my eye, it was investigating a tub of Verbena that had been placed by my pond,
suddenly a 'eureka' moment struck me, this was no Bumbleblebee but a Hummingbird Hawkmoth, I nearly fell out of my swinging chair, where was my camera when I needed it, I rushed indoors and grabbed my camera, the Hummingbird Hawkmoth was nowhere to be seen on my return.

As I sat back down, I could see that the Hummingbird Hawkmoth had discovered my clump of Valerian further down the garden which I had grown for just such an occasion.

This time  I thought I would watch for a time and try and get a photograph later as it happily hovered around the Valerian flowers in a typical Hummingbird fashion.

What a stunning day-flying moth this was, I took a few photographs as you can imagine, most of which were out of focus, trickly moth to capture as they move from flower to flower, but I did manage a couple of photographs, some showing the long proboscis.

I caught sight of this Hawkmoth  on two more occasions the following day, and then no more.

I think planting the Valerian was a huge success, which I may now move some around the garden,
in the hope for more sightings next year. 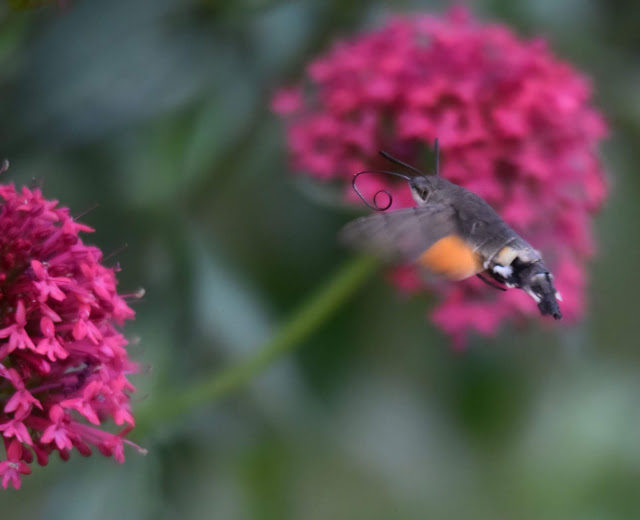 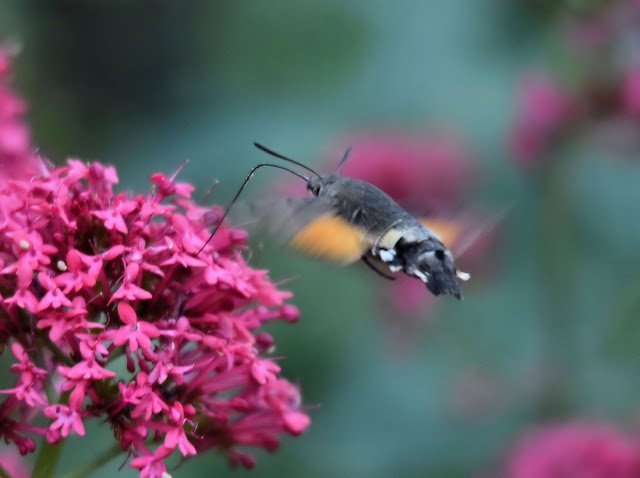 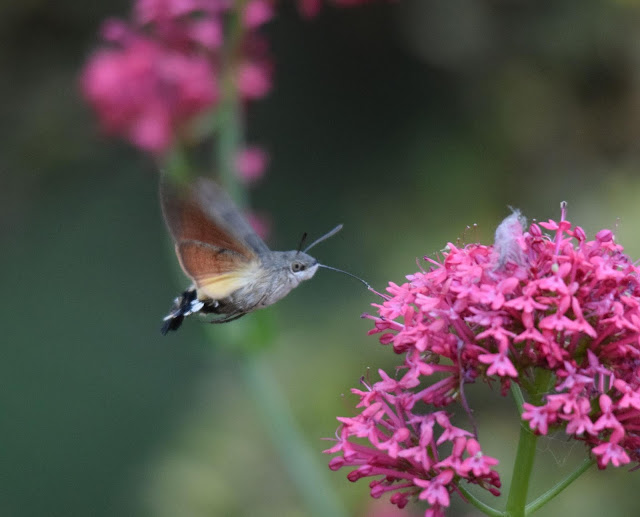 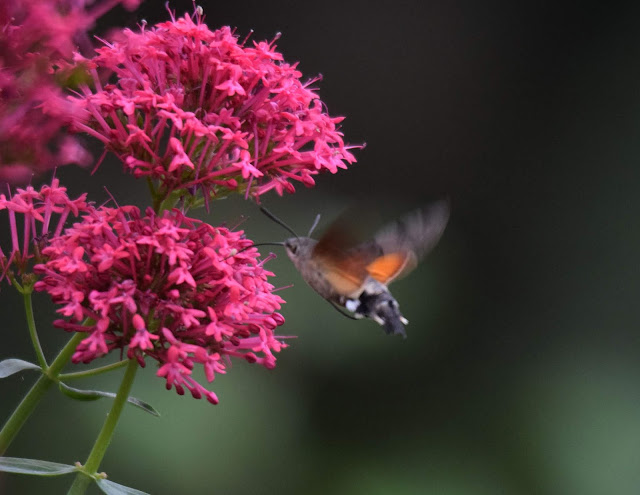 
Well a new Skipper for me !

With the weather not so good at the moment it's time to catch up and record some of my recent sightings.

I set myself a few targets this year, in the world of Butterflies I had set my sights on trying to see the Adonis Blue, Chalkhill Blue, Heath Fritillary and the Silver Spotted skipper, all of which I have been fortunate to observe in the field this year.

Queensdown Warren in Kent was the place to head for to see the Silver Spotted Skipper, and as the optimum time to see these approached, end of July through to August I made my first visit to the site.

A Warm sunny day with plenty of Butterflies to view, my first  couple of Silver Spotted Skippers were seen, but with some difficulty ,very fast darting flight low across the grasses. not to many to be seen probably as they were at the early stages of there flight  period. Just managed one photograph to record this first sighting. 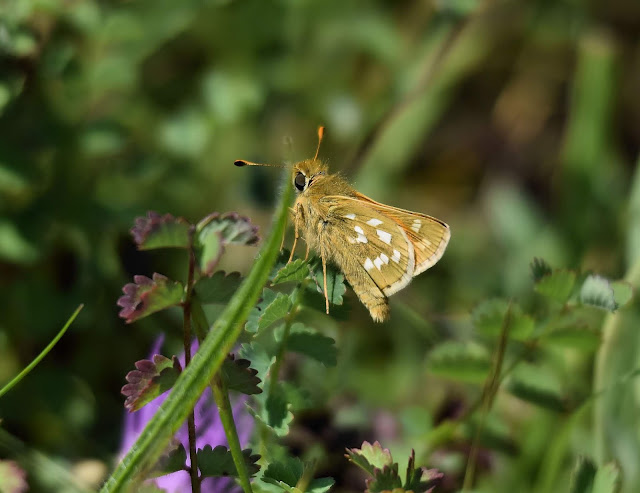 My second visit  a few weeks later 13th August, and what a difference  a few weeks make, the Skippers seemed to be everywhere enjoying the sunshine giving good views of all their features. still flying  low and very fast but I seemed to be able to keep my eye on them this time , and once they settled there was plenty of opportunity to get some photographs. 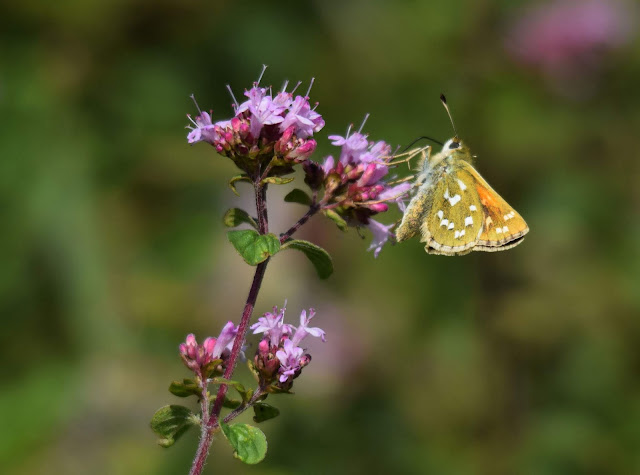 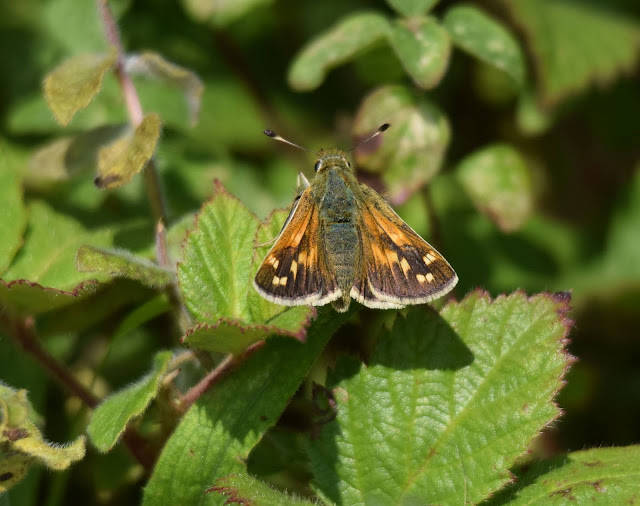 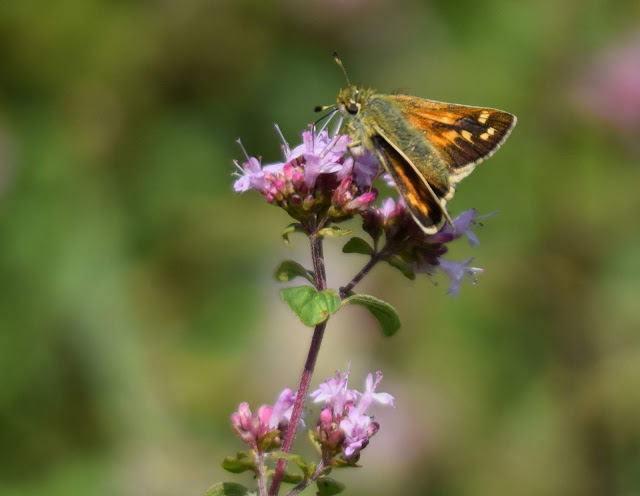 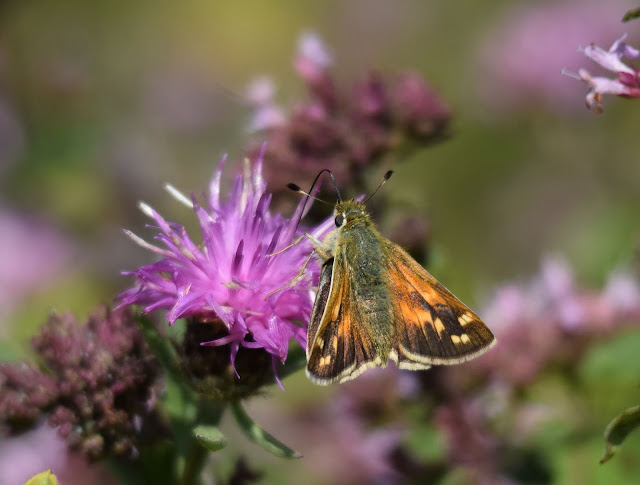 I have now managed to see several Skippers now, just one sighting of a Dingy Skipper, several Essex Skippers, Small Skipper and Large Skipper next year I hope to try and catch up with the Chequered Skipper.

My wanted list for nest year stands like this at the moment :-
Chequered Skipper, Purple Emperor Butterfly, Long Tailed Blue which seems to be making a stand here in Kent at the moment, maybe the Glanville Fritillary which resides very close to the Kent border, a few more sightings of the various Hairstreaks would also be nice.

What I have learnt this year is that if I want to see new species previously unseen, I need to make the effort and search for them in their favoured haunts, we will see what  next season brings.


One of my garden wildlife highlights this year has been the discovery that my long forgotten  ' Bee Hotel/houses'  has finally got some occupants, its been nearly two years since I placed these in the garden after noticing the tell tale semi-circular cut outs on my Rose leafs.

I have heard it said that these little insect house's are not very successful, but mine has certainly found favour with the local leaf cutters this year. 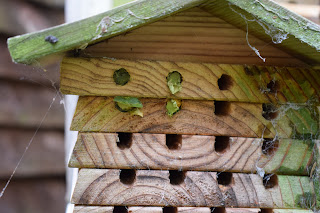 These are the the two insect houses , as you can see some of the cells have been capped off with leaf sections.

I have obviously found a position to their liking.

The next stage was to find out what species of leaf cutter was using the boxes. 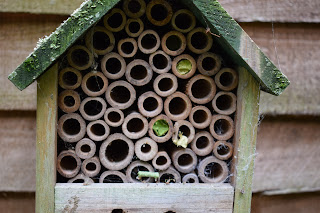 Finally caught sight of a bee entering the box, closely followed by more Bee's entering the cells .
As I patiently waited close by I soon noticed the Bee's coming in with some leaf sections.

I just needed a photograph now and an identification.

Finally got some good views as they flew into the house, they do not hang around and soon disappear into the cells.

These turned out to be one of the commonest garden leaf cutters,  commonly known as the patchwork leaf-cutter or (Megachile centuncularis).

Common or not I was really pleased that the Bee's were finally using the insect house, in the end eight cells out of twenty four have been used in one house, and three in the other. 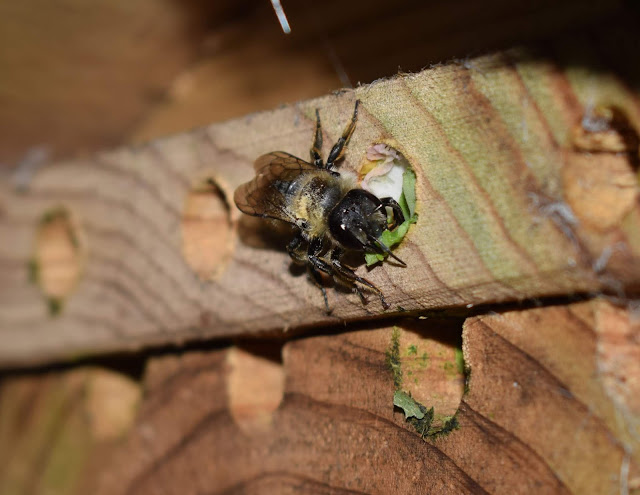 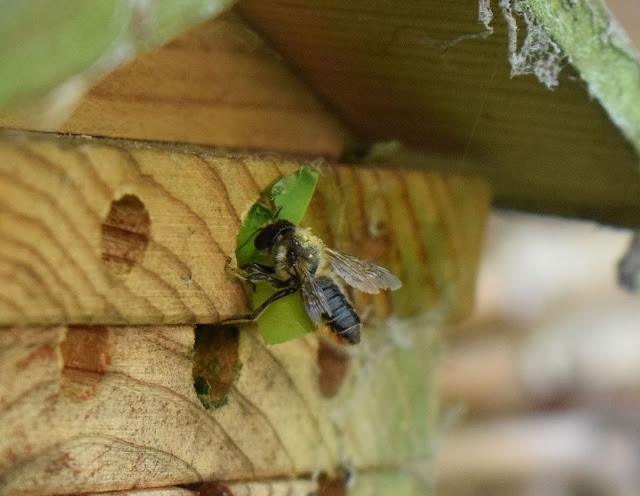 These Leaf cutter Bee's have a yellow pollen brush under there abdomen which can be clearly seen in some of these images. 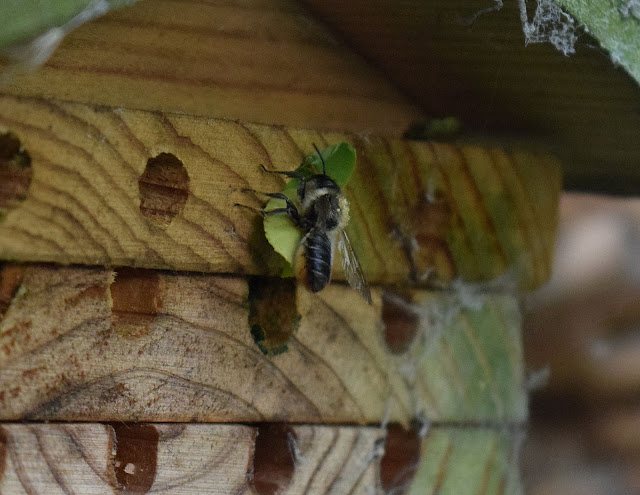 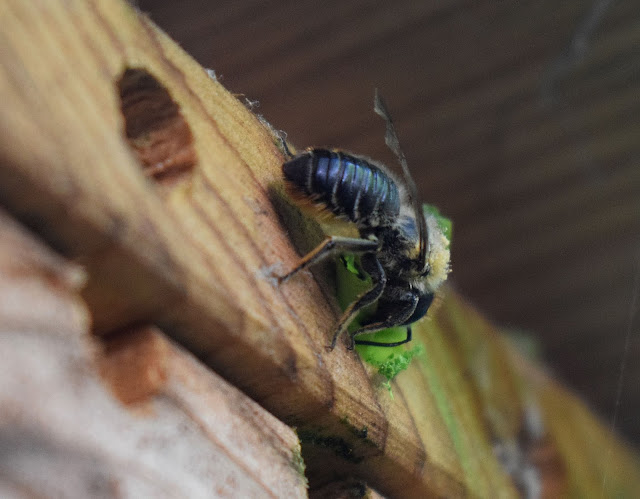 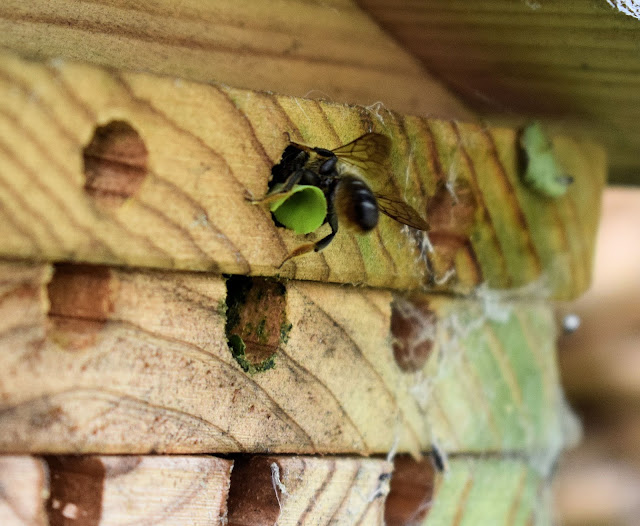 I tried to get a photograph as they flew in towards the house, but they come in quite fast and hard to get a focus on them. this is the closest I got. 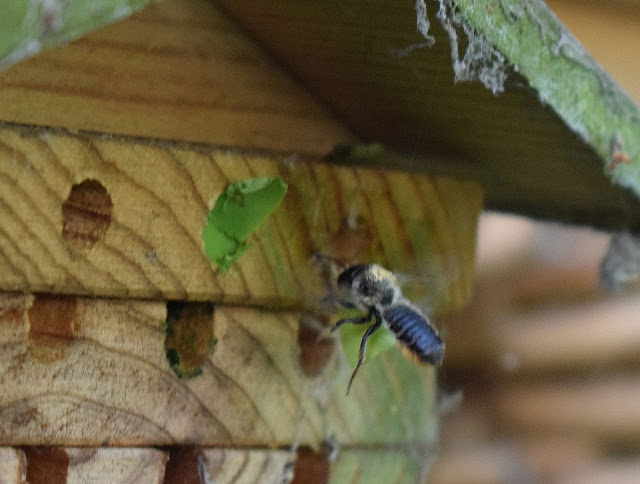 Quite fascinating to watch as they seal the exterior of the cell, will be interesting to take a look later at the completed cells, later in the winter.

Update - I have noticed a couple of the cell caps have been removed, probably by the local Tits looking for a meal.

I read that sometimes the Leafcutter Bees leave these last cells empty to combat the birds attentions.

The moral here is not to give up on your Bee houses, just find that perfect location.