This intriguing little bee first came to my attention last year when I was studying the Bumblebee's visiting the Flowering Blackcurrant (Ribes sanguineum)  in our garden.

And here we are once again after another successful breeding season.

Like a miniature Bumblebee, its their fast darting flight which usually attracts your attention, then as it slows down to hover in front of its selected nectar source, you have a window of opportunity to study it before its off, It appears very restless, there are only a few flowering plants at this time of the year so competition for the available nectar sources must be high.

I first noticed these Bee's in the garden a few weeks ago which ties in nicely with their emergence date of late February to early March, apparently the brown coloured males emerge first, closely followed two weeks later by the black coloured females. They have a single flight period which stretches from February/March to late May, no longer than three months, a very short life span, probably why they fly around so fast, time is short!

They can be quite aggressive to other Bumblebees visiting the shrub, especially if they meet on the same flower, I watched a male see off a much larger Buff tailed Bumblebee, like a fighter plane buzzing a bomber, their speed and agility in the air is quite staggering. They are of course just defending their chosen territory in the hope that they can mate with a visiting female. 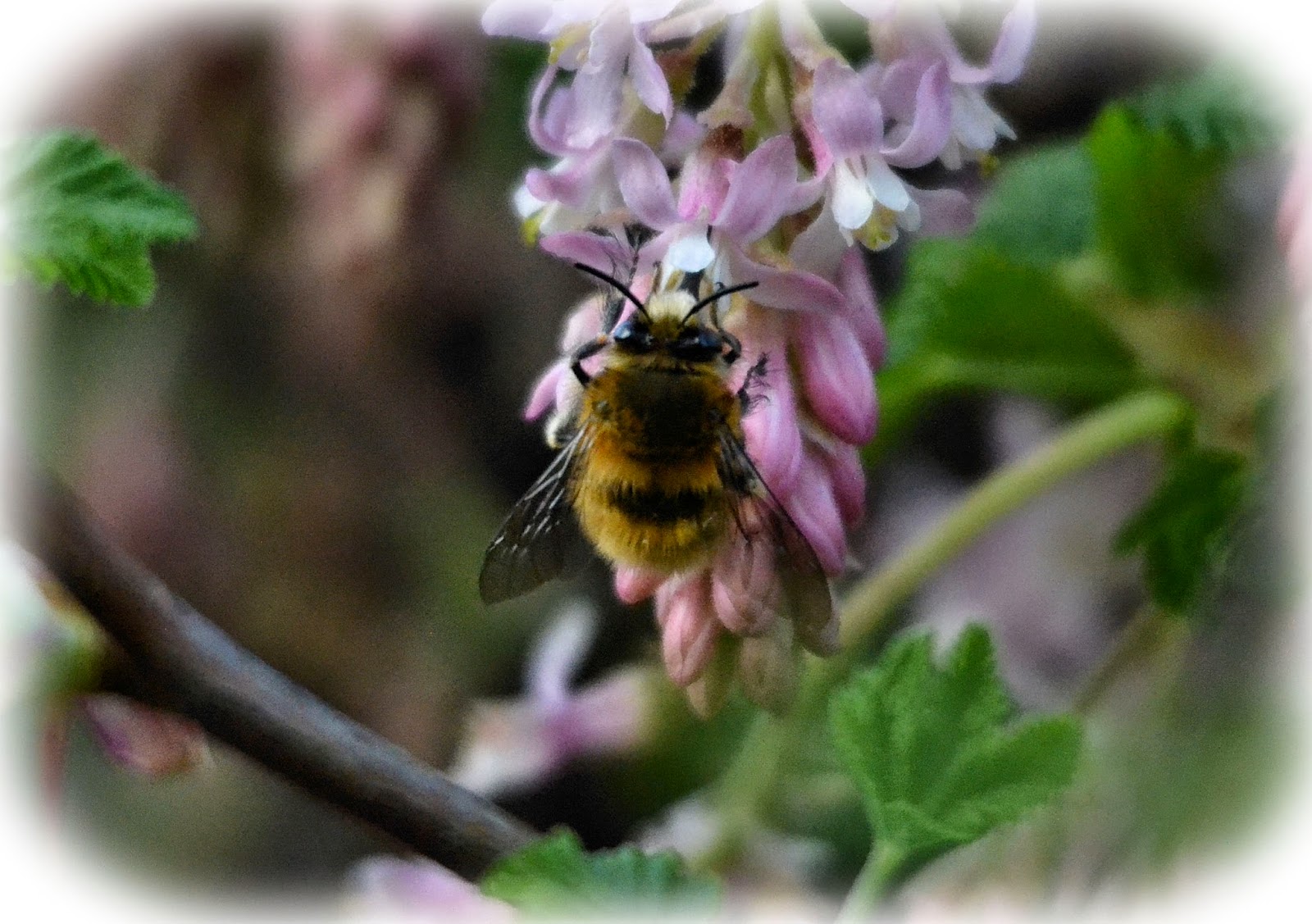 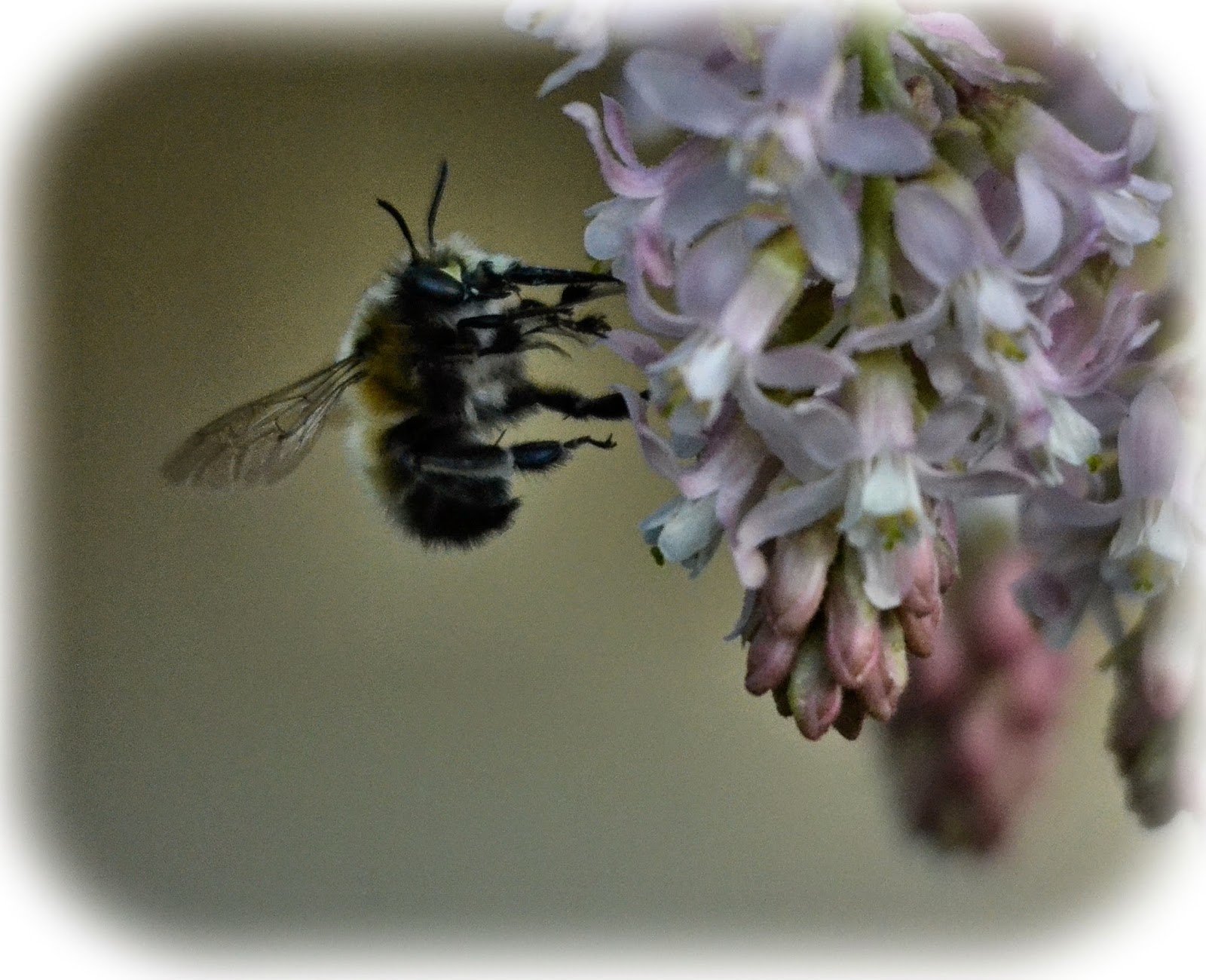 Once the female has mated  nest building  can begin, this  usually occurs in the soft mortar of an old wall, although they are known to nest in the ground.

The female excavates a single burrow which can end in up to six to twelve oval cells, before sealing the cell the female deposits a supply of pollen, lays a single egg on top and seals the cell with soil or mortar, job done.

Both male and female bee's develop into fully grown adults by the end of summer, they remain over winter in their sealed cells until the following spring, where they emerge once again.

I am yet to find one of these burrows, I suspect they are nesting in my neighbour's old brick built garage close to the flowering blackcurrant, its nice to see them once again.

March around the Pear tree !

21st March officially the first day of spring, although the 'met office' are implying that most people now consider the 1st  March as the beginning of spring.

The flowering blackcurrant in the garden is nearly at full bloom, the Bumblebee's are starting to visit, the first Bumblebee to visit was an Early Bumblebee worker  (Bombus Pratorum) closely followed by a queen Buff Tailed Bumblebee fresh out of hibernation.


Not much has changed on the Birds around the garden, Goldfinches  are visiting in good numbers throughout the day and appear to become more tolerant of human activity. Chaffinchs have become very common, although their numbers seem to fade as the summer months draw near. The occasional Greenfinch is always a nice surprise as they are rarely seen in our garden.

The Blackcap that has been with us  through the winter months still visits the garden, it has become less territorial and totally ignores the other birds on the feeders much to their relief I suspect.

We now appear to have a pair of Robins that have adopted our garden, hopefully they will find somewhere to nest,  a pair of Blackbirds have been seen gathering nesting material in the garden not sure if they are nesting within the garden. Other birds  have included Blue Tits , Great Tits and the occasional Long Tailed Tit.

The male Sparrowhawk still trying its luck at ambushing the birds around the garden, fortunately unsuccessfully at the moment

Activity around the fish pond is increasing, several Common Newts have been seen, along with a mass of Frog spawn, which I must disguise, before my wife realises what she is looking at.

Its now the beginning of March, not quite spring yet, but the sun is shining, crocuses are in full bloom around our magnolia tree, and I have noticed for the first time this year, some insect action around the open flowers.

Last year I managed to get my head around BumbleBee identification, seeing most of the more common ones around the garden, thought I would try the same with Bee's this year.

Identification is not going to be so easy with these, on account of there being so many similar species.

I think this is one of the species of Adrena Mining Bees, but this is where it gets difficult, because of the sheer number of species.
I have narrowed it down to possibly 'Andrena Flavipes' or the 'Yellow Legged Mining Bee'.
These Yellow legged mining Bee's are usually the first to appear in early March, these Bee's are apparently 'Bivoltine' which means simply, that there are two generations, the spring generation are flying from March to May and the summer from June to September.They are also suppose to be quite common here in the south of the country, so that all fits. 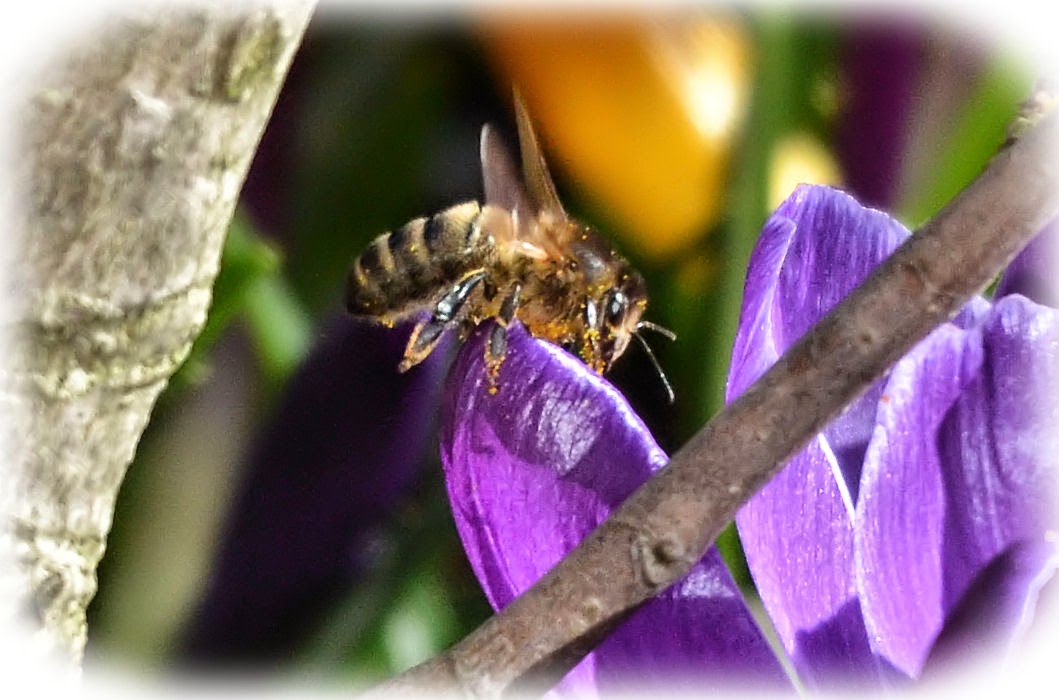 The photographs are not really clear,but you can just about make out the yellow  hairs on the legs of this individual, which could make it the male, the hair on the females legs are denser and more prominent.

Confusingly, Honey Bees can be very similar in appearance. 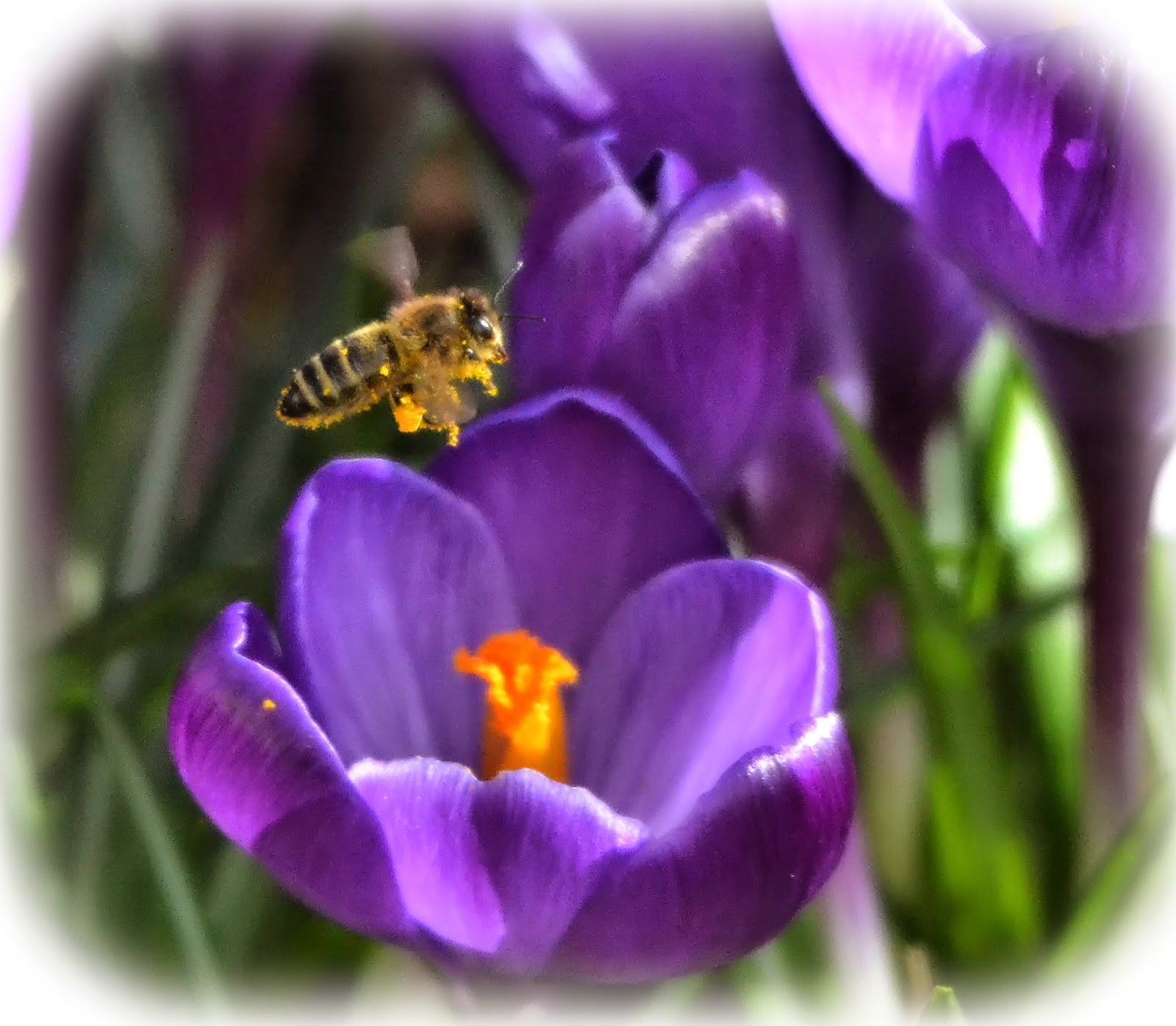 The more I look at the photographs, the more I doubt my identification,

I can say with some certainty its definitely a Bee, and its nice to see them back around the flowers collecting pollen.

I think I need a close up of this one for a more positive identification, unless someone with more knowledge can shed some light on their identification.

I first came across this Little Owl site back in 2012, and have seen Little Owls here for the last four years, I was curious to know why I have never witnessed any successful breeding attempts, so after a bit of research, I think I have made sense of the erratic sightings. 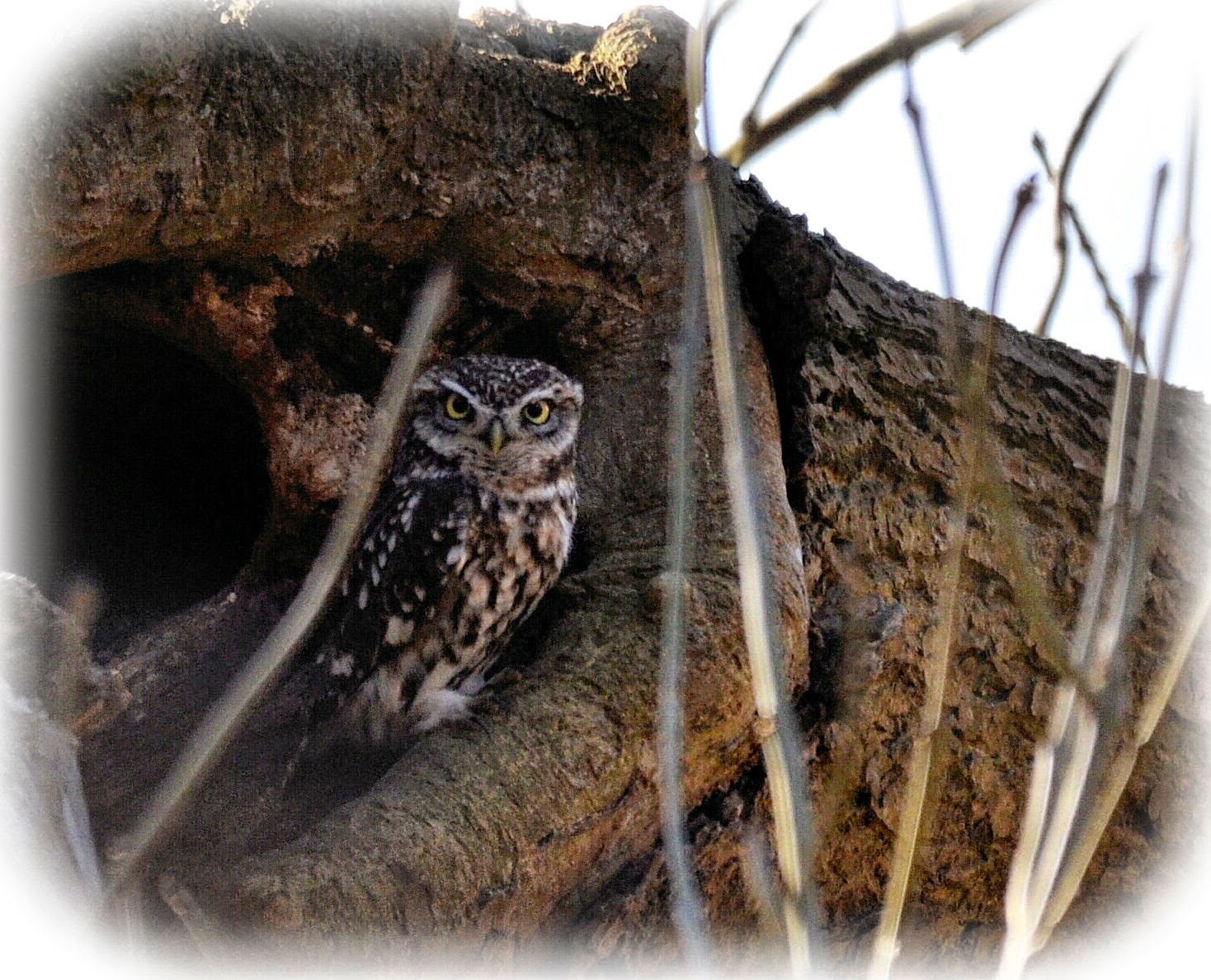 The Little Owl begins its mating season in early February and ends as late as May, this ties up with the reappearance of the Little Owl where I usually see it within the wood. This is more than likely the male.

The male Little Owl patrols his territory and calls, partly to fend off other males from his territory but also to attract a mate. I have never heard this Owl calling, so maybe an earlier visit is needed.

Once a potential mate makes contact, pair bonding begins, this includes the Little Owl flying in pairs and sitting in the same tree, I have only once in four years noticed two Owls together in the same tree.

The next stage see's the female making a begging calls to her partner, which prompts the male to feed her prey that he has captured, this is important because it indicates to the female that there is enough to food in the area to support reproduction.

As the pair bond strengthens, the couple begin nest site visiting within his territory until a suitable nest site is chosen by the female.

And this is probably why I have never seen any signs of successful breeding at this potential nest site, the female not finding it suitable, to be fair the site is fairly near a woodland trail where dog walkers pass by, I suppose the disturbance from dogs doesn't help.

I would love to know where the other  nest sites are though. here are a few images I have managed to capture, over the last few years. 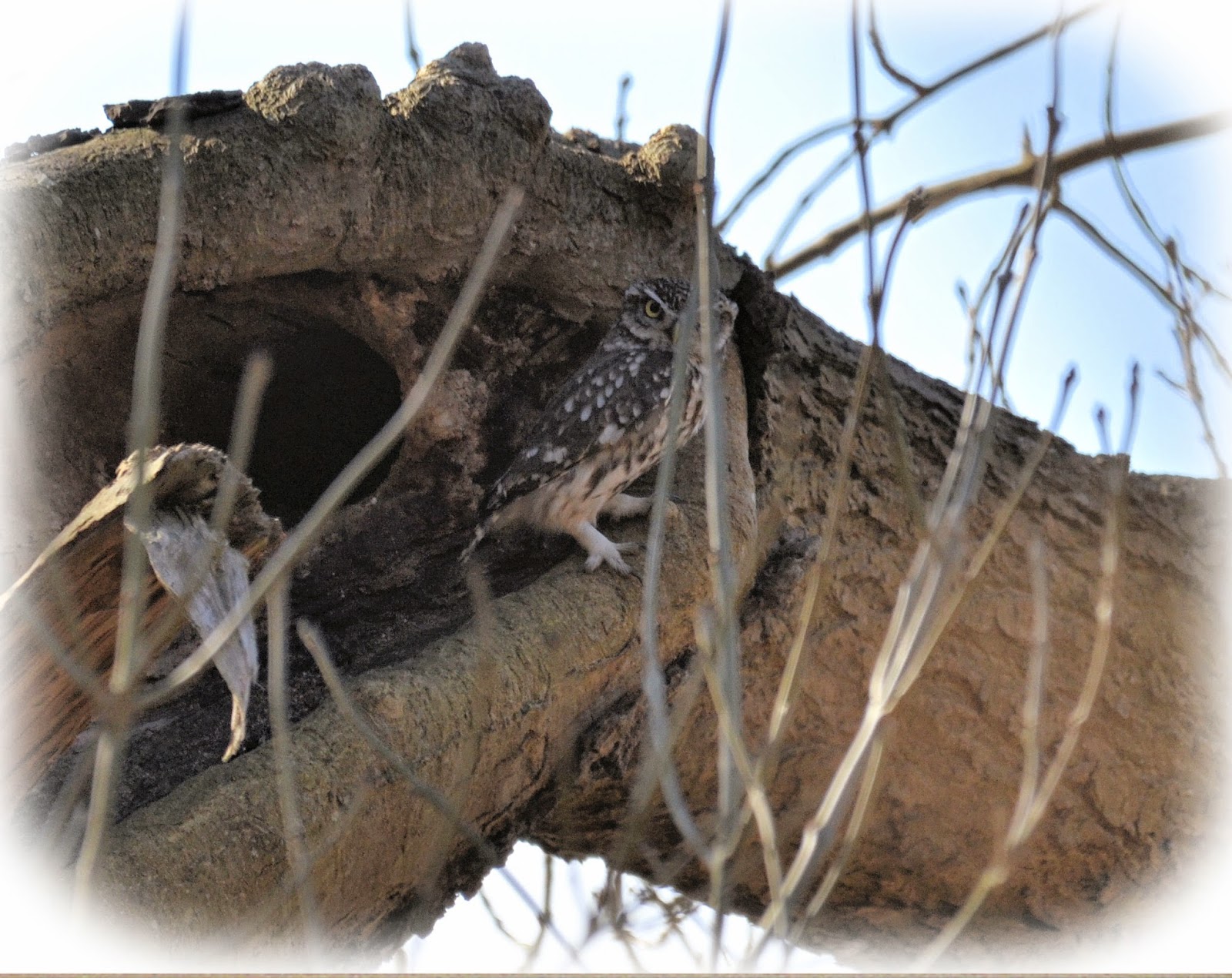 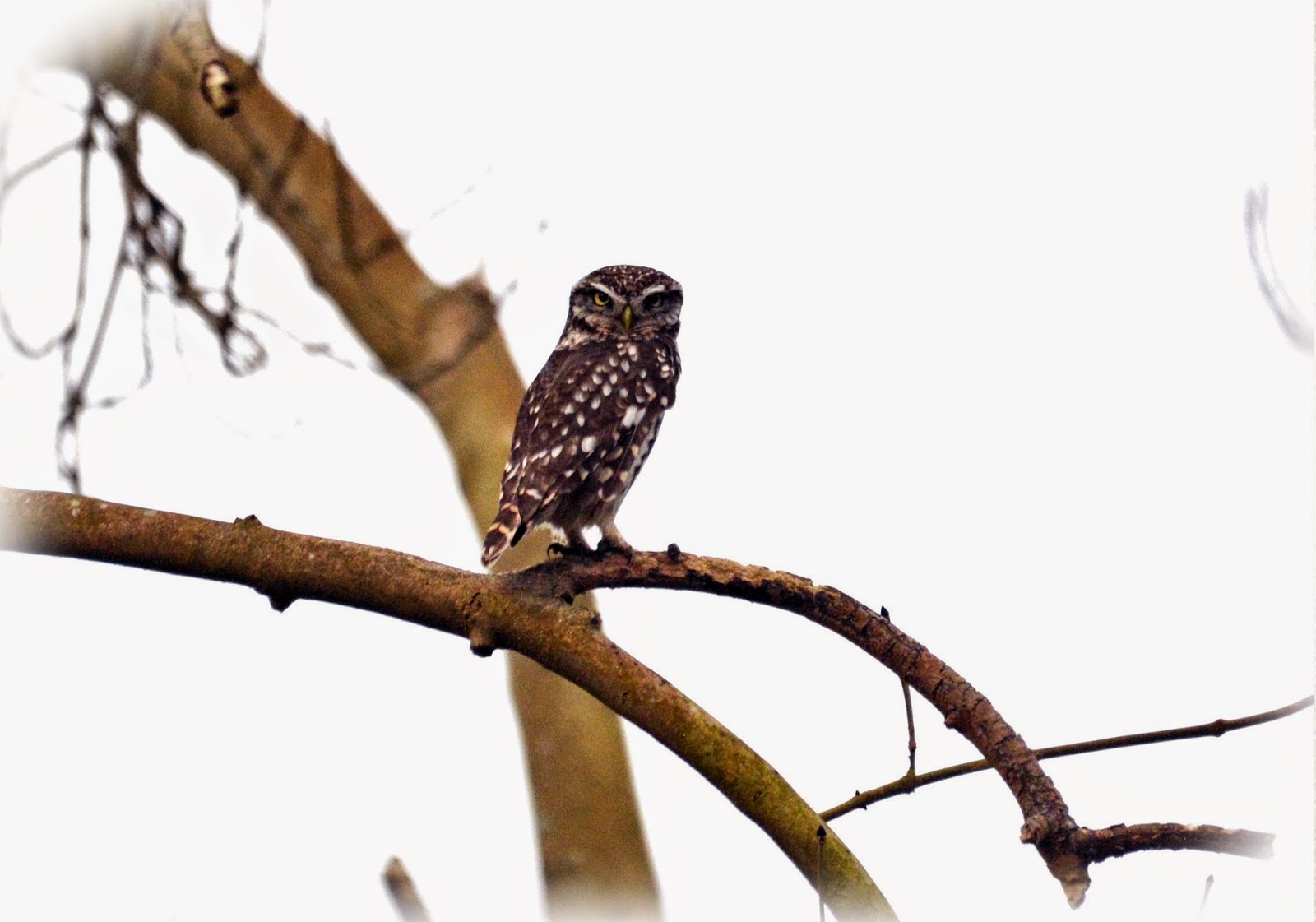 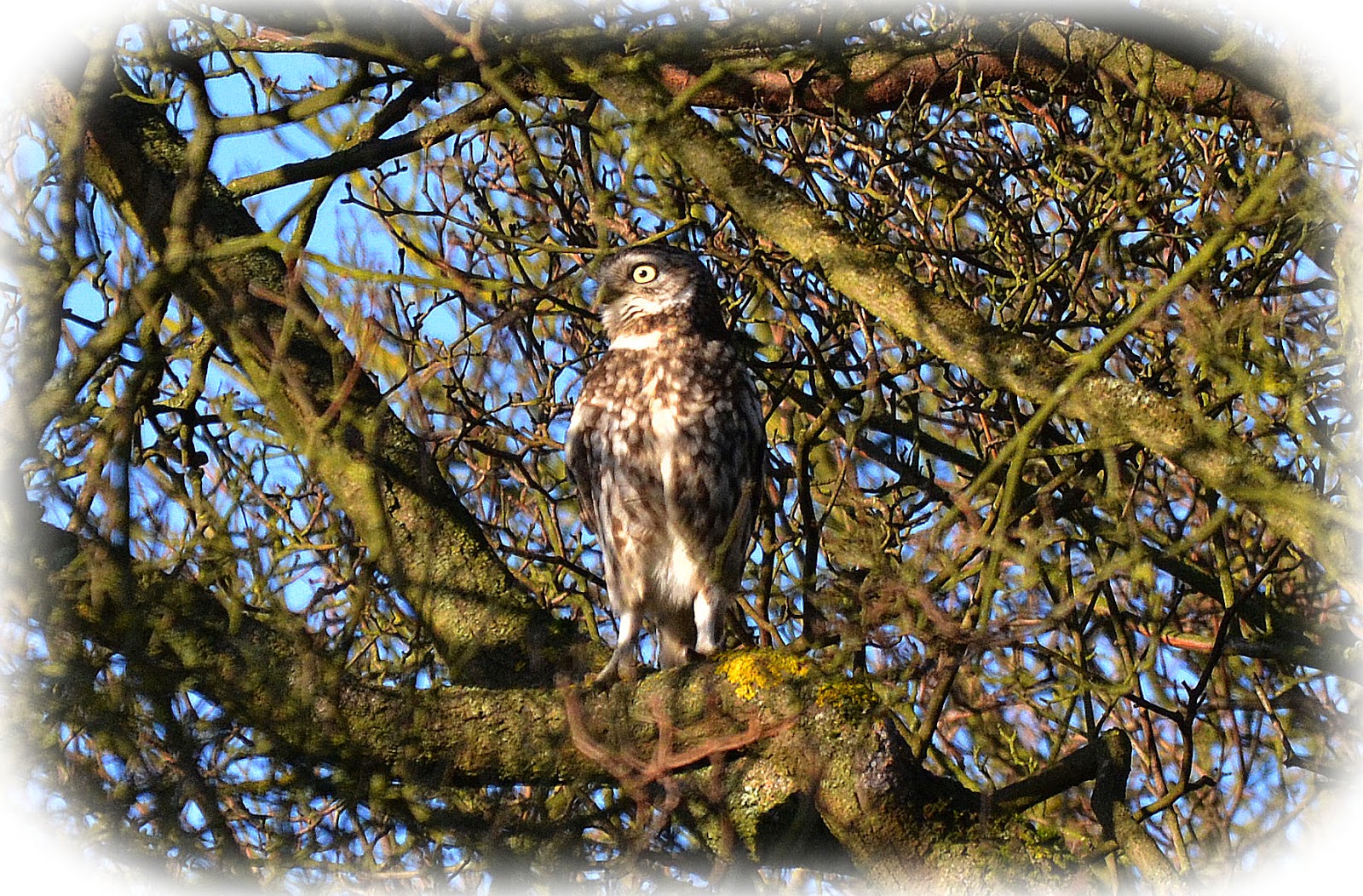 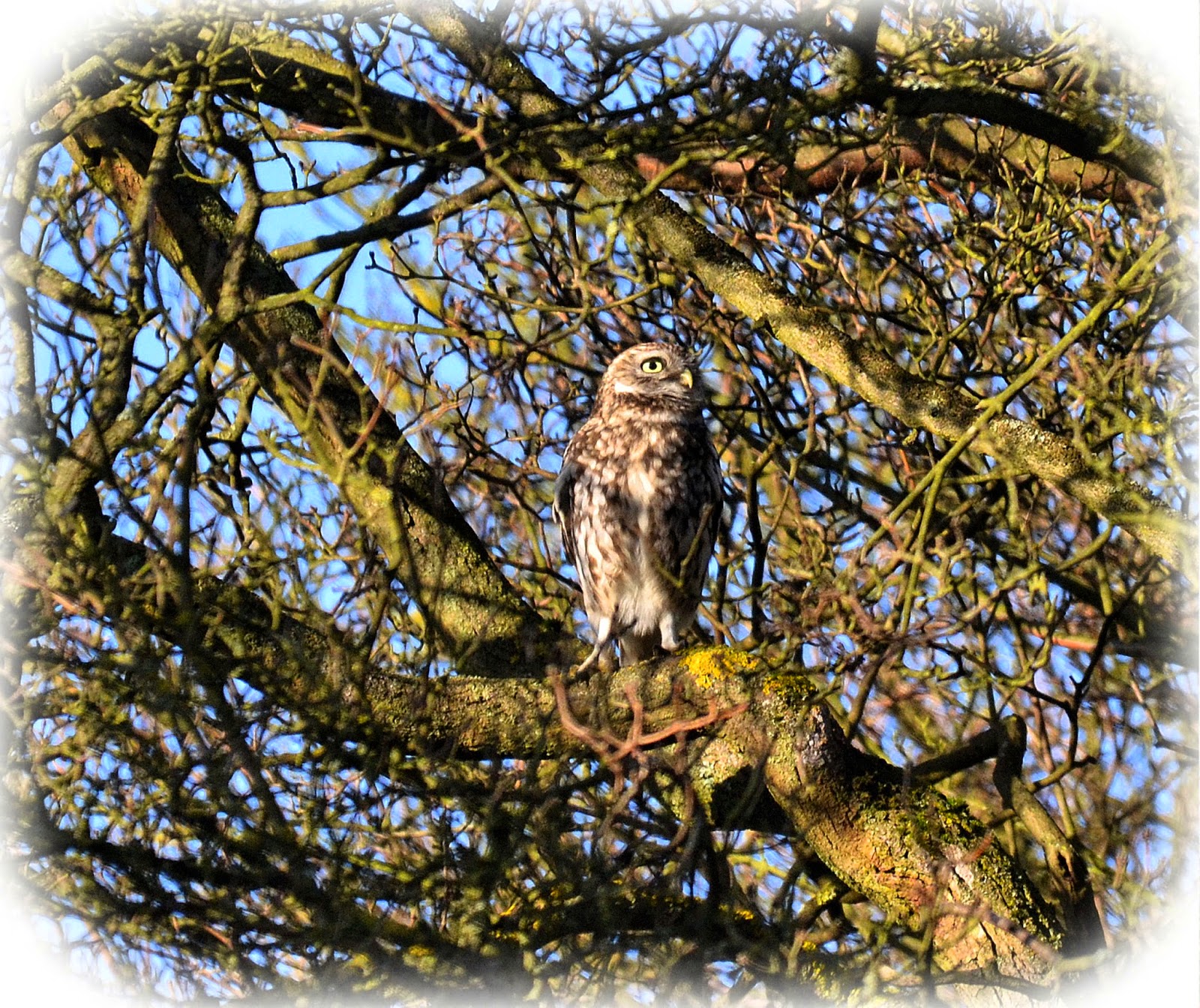 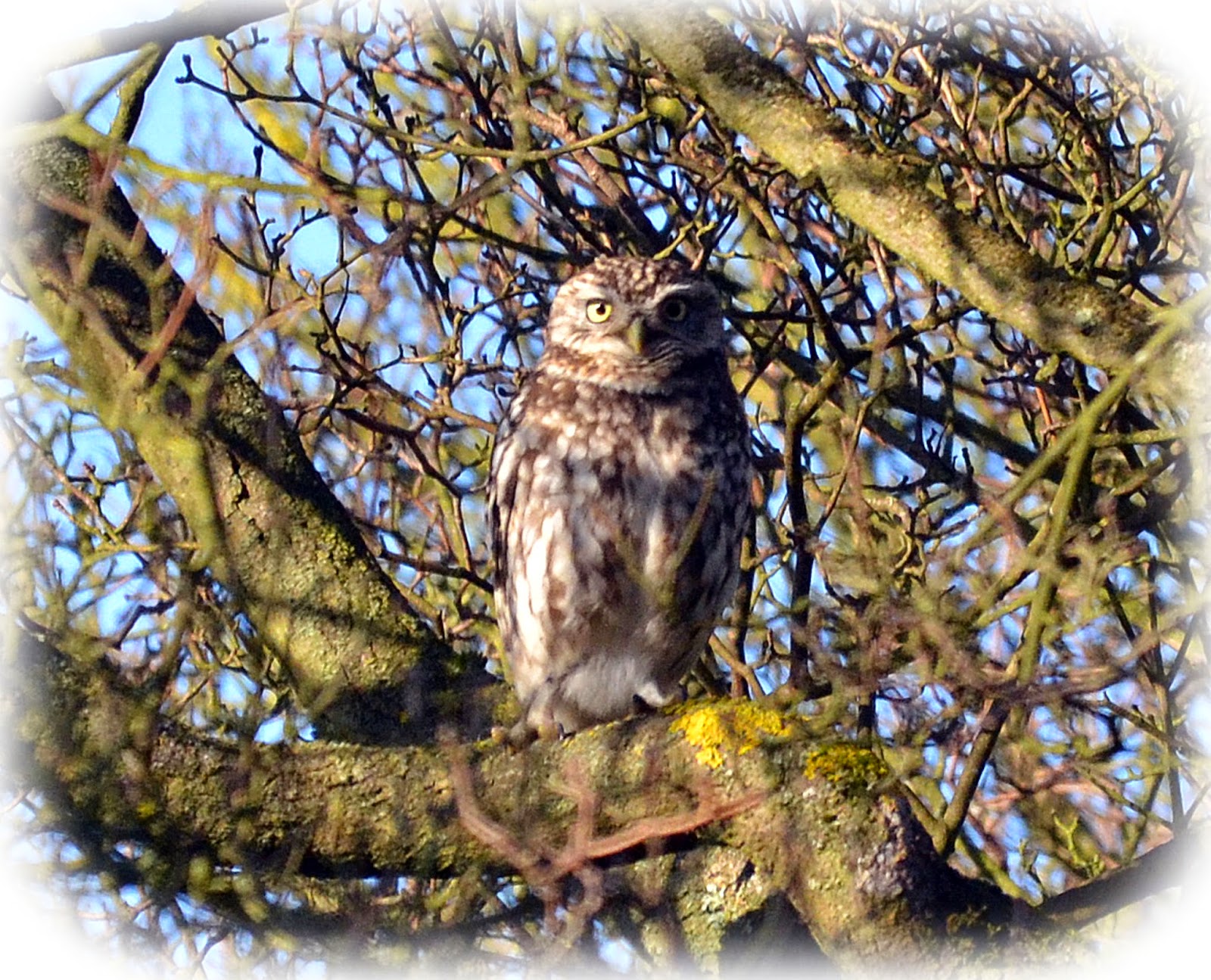 I live in hope that a female will one day find this nesting site suitable.
Posted by Merlin52 at 19:09 2 comments: