The Virtue of Patience !

One of the deciding factors for a trip to Rainham RSPB for me,
is the fact that its a very short car journey, less than 15 minutes if there are no traffic jams, which means more time for bird watching and enjoying the marshes.

Today was not one of those days, the removal of the Dartford Tunnel toll booths and the subsequent road alterations was causing a traffic nightmare, and to make matters worse as I sat in the stationary traffic I realised that I had forgotten my binoculars and flask of coffee.

The weather forecast had given me just a small window of opportunity until mid afternoon, when heavy rain was expected, time was slipping by.

I eventually reached the tunnel, feeling slightly agitated now that I had made a wrong decision to come this way, but there was no turning back, and as I exited the tunnel into Essex, the sun suddenly broke through the gloom, I could feel the tensions slipping away.

A walk through the woodland trail was uneventful, but as I reached the woodland feeding station there was a good selection of birds feeding, I decided to make myself comfortable on the bench, a cup of coffee would have been nice, but the sun was shining and for most of the time I was alone undisturbed.

All the usual suspects were there, Chaffinch, Blackbird, Collared Dove, Great tits, Blue Tits were flying in snatching some food and flying off again.
This was my best attempt at a Blue tit in flight,
they are just too fast. 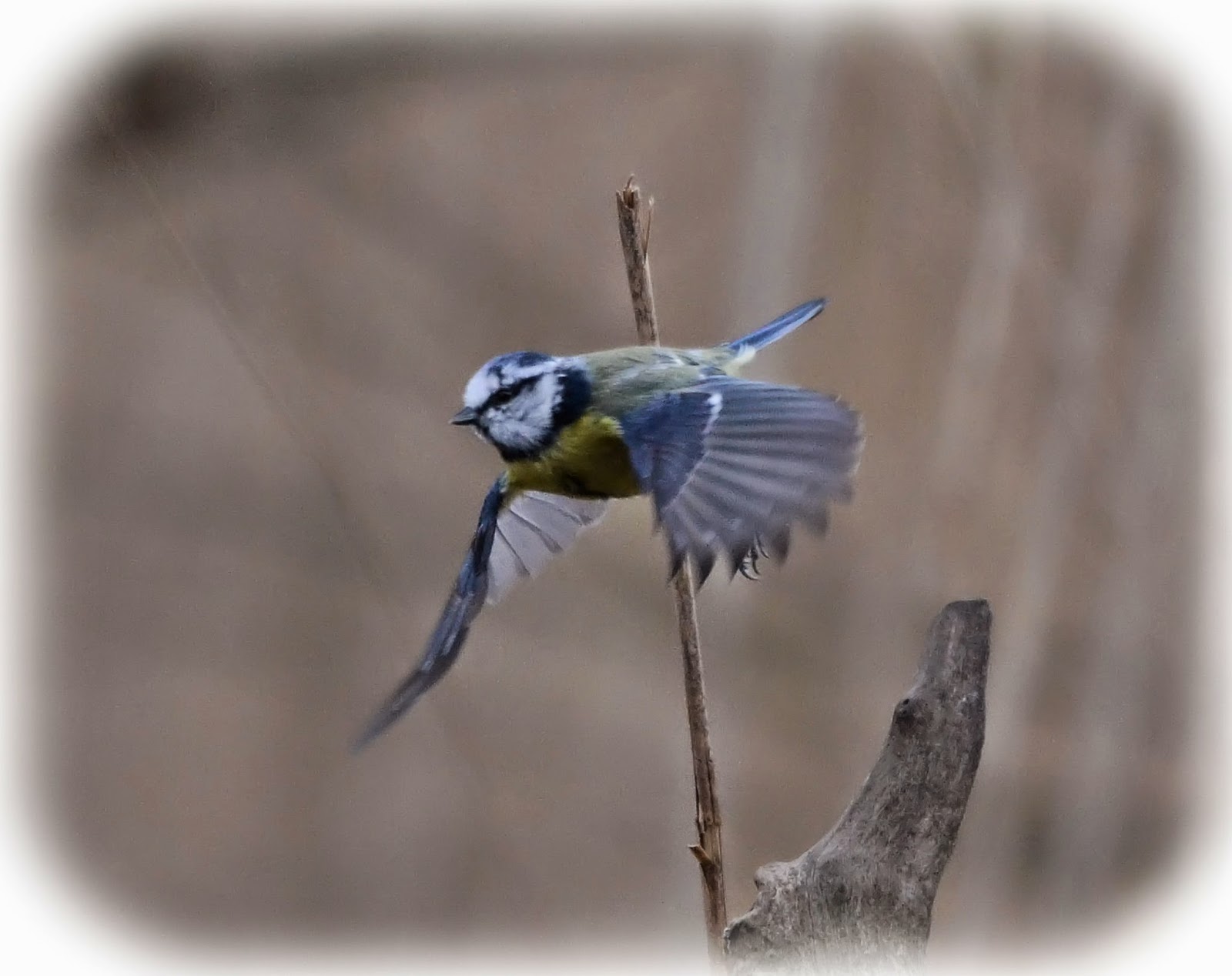 I was trying to photograph the birds before they reached the feeders, I much prefer photographs showing the movement of birds.
but I'm still finding this very difficult. 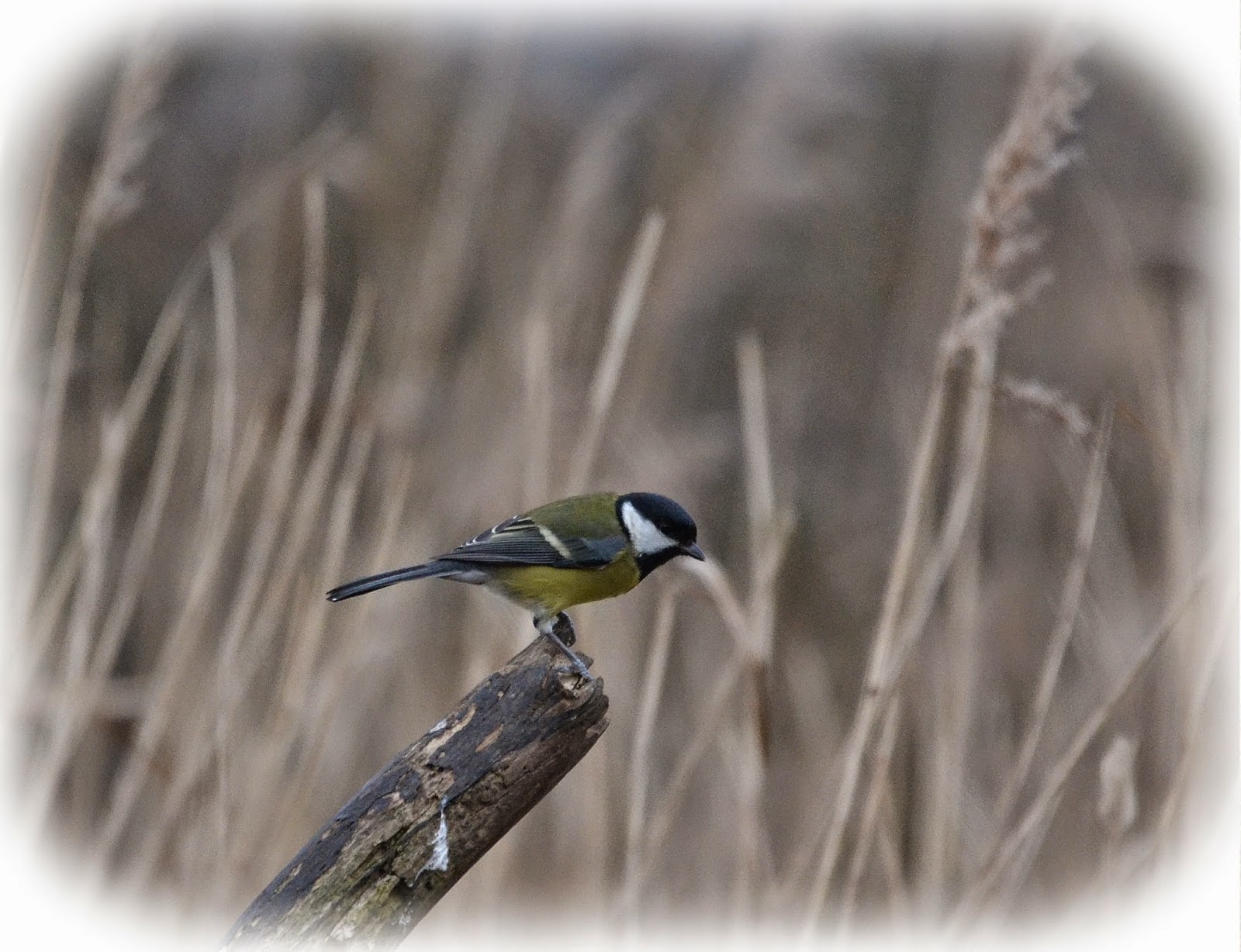 Lots of Reed Buntings,with a few Robin and Dunnock feeding on the fallen seed around the base of the feeders.

A Small group of Greenfinch seemed more hesitant in their approach,  but finally flew in to feed. 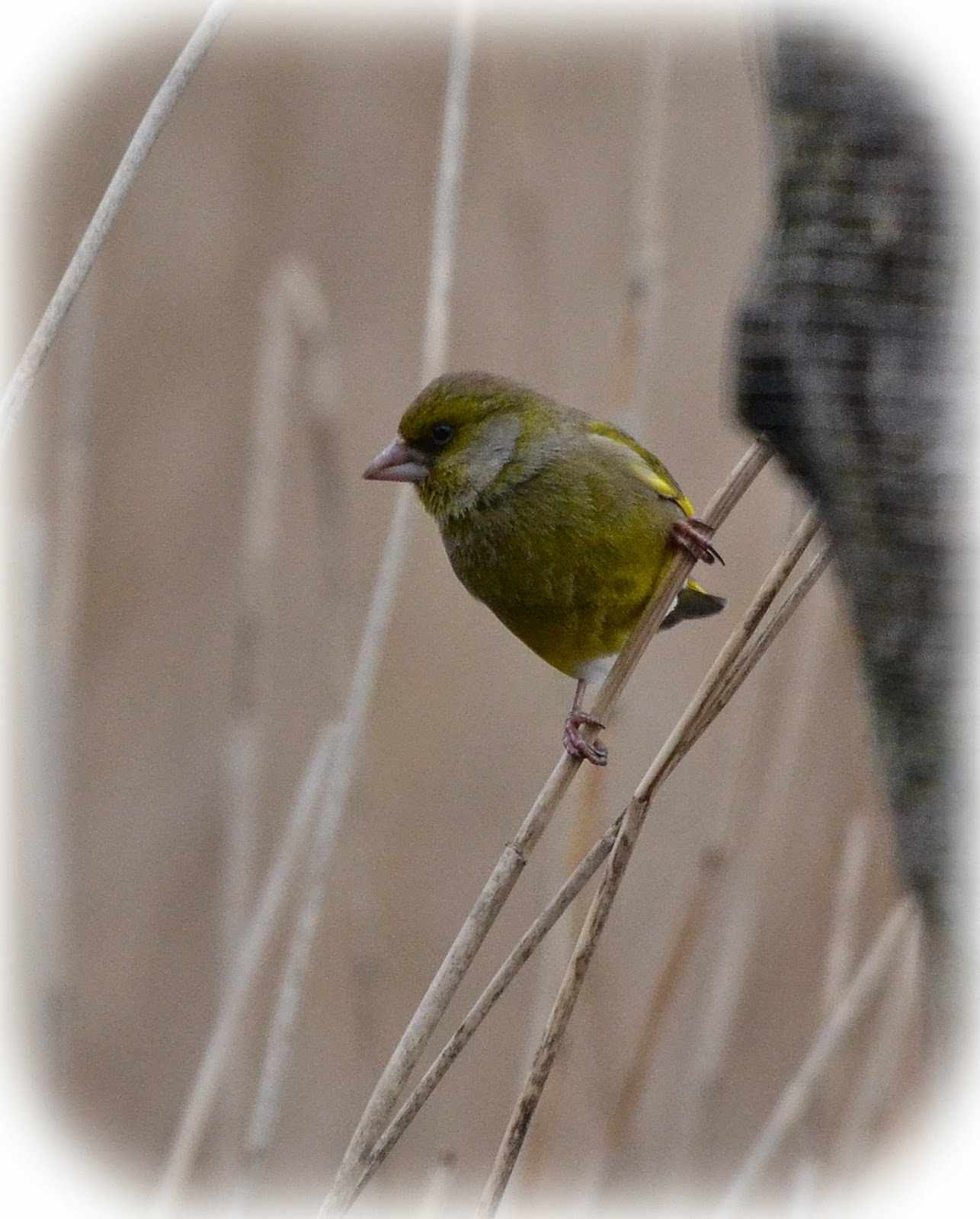 As I sat watching these birds flitting about in all directions, a movement at the back of the pool caught my eye and the hint of a white tail feather disappearing into the reeds, a possible Water Rail, more likely a Moorhen. I decided to sit and wait in the hope that it was a Water Rail, and that it might reveal itself again. Luckily there was plenty of avian action to watch.
Eventually after a long patient wait another movement in the reeds finally revealed the bird , a Water Rail in all its glory, and it walked out into the open area right in front of me. 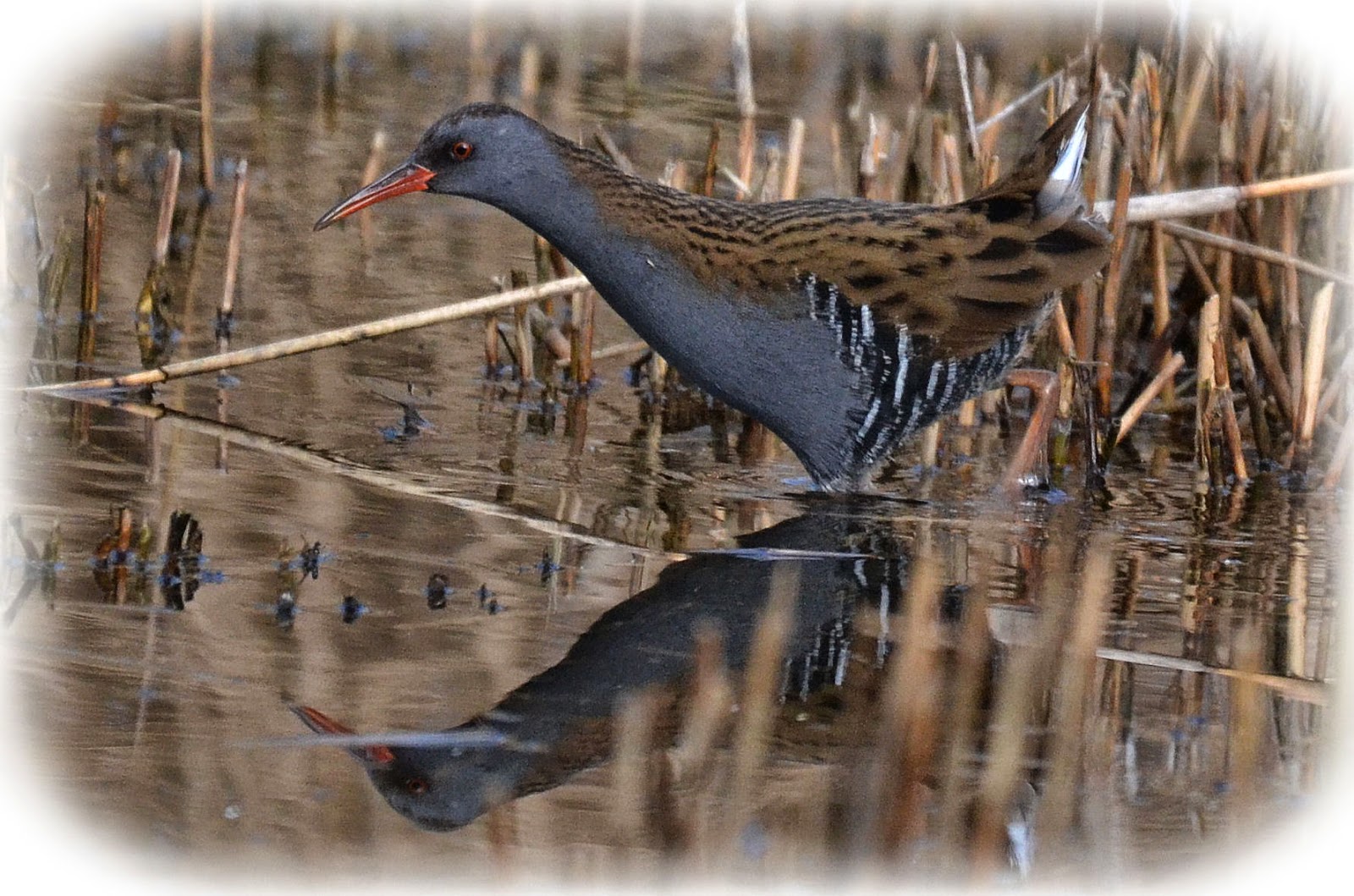 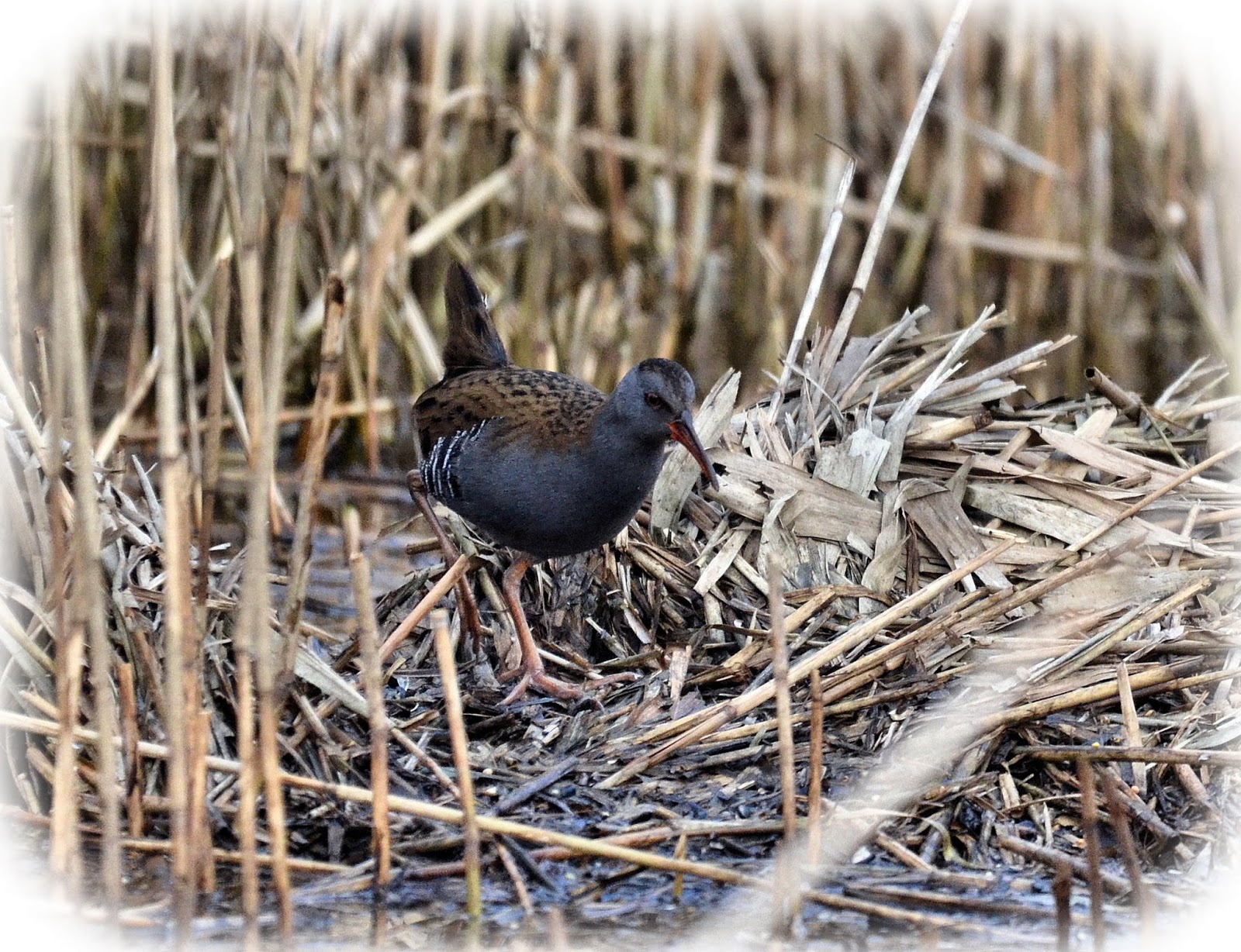 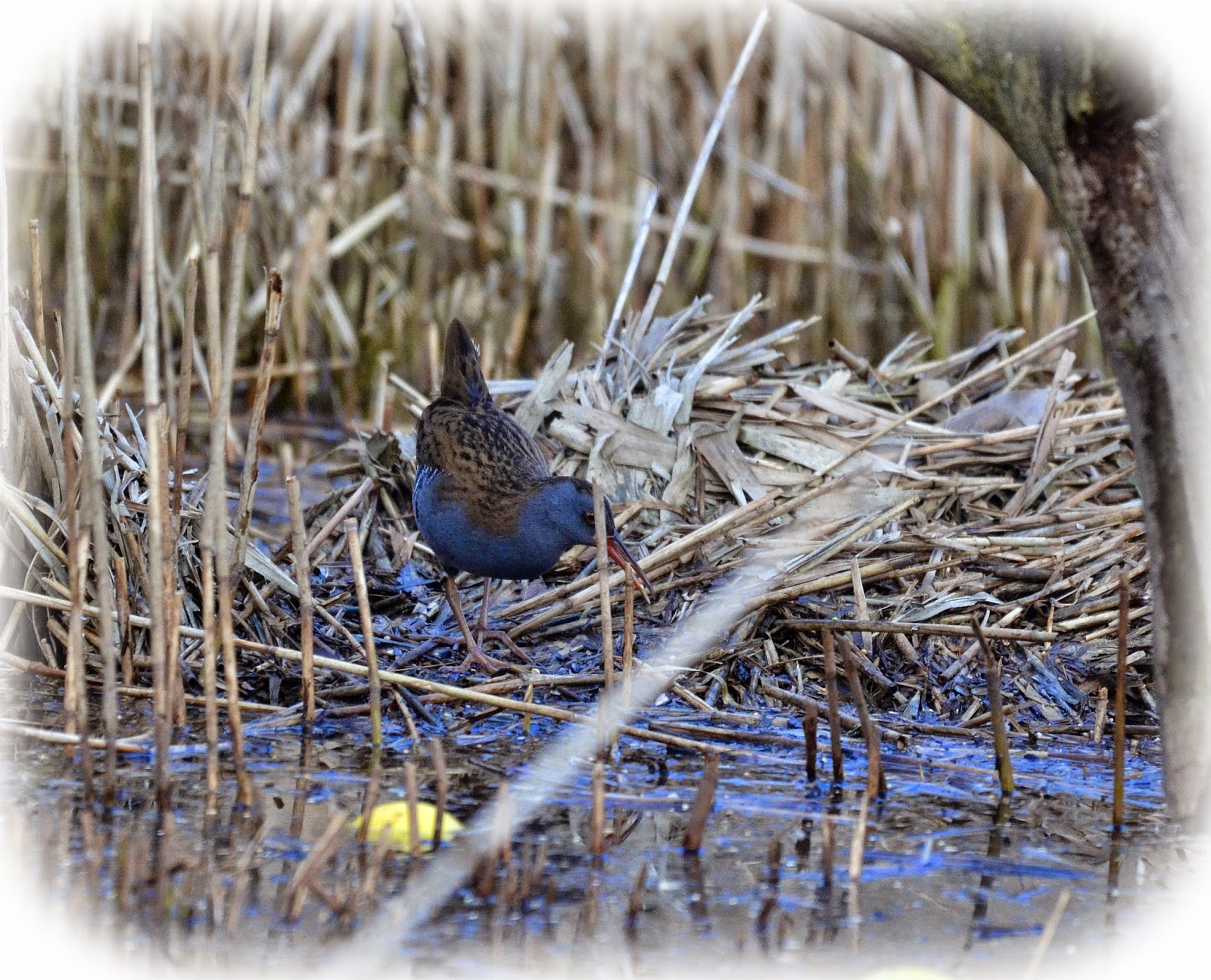 It fed for a while around the feeders picking at the fallen seed, it must of caught sight of me, startled, it made a mad dash for the reeds and disappeared.

Content with this sighting, I moved off for a very pleasant walk around the marshes.

Just made it back to the car as the first drops of rain began to fall, ironically, the journey back through the tunnel was clear and quick.
Posted by Merlin52 at 13:35 No comments:

It's been a long time now, in fact not since the winter of 2013 has a Blackcap been seen in the garden,
that's not to say that it's not been there, just not noticed.

So in the last few days of January 2015, coinciding with a particularly cold snap, there it was, early in the morning feeding on one of the apple halves I had placed on top of the feeding station, a fine male Blackcap. 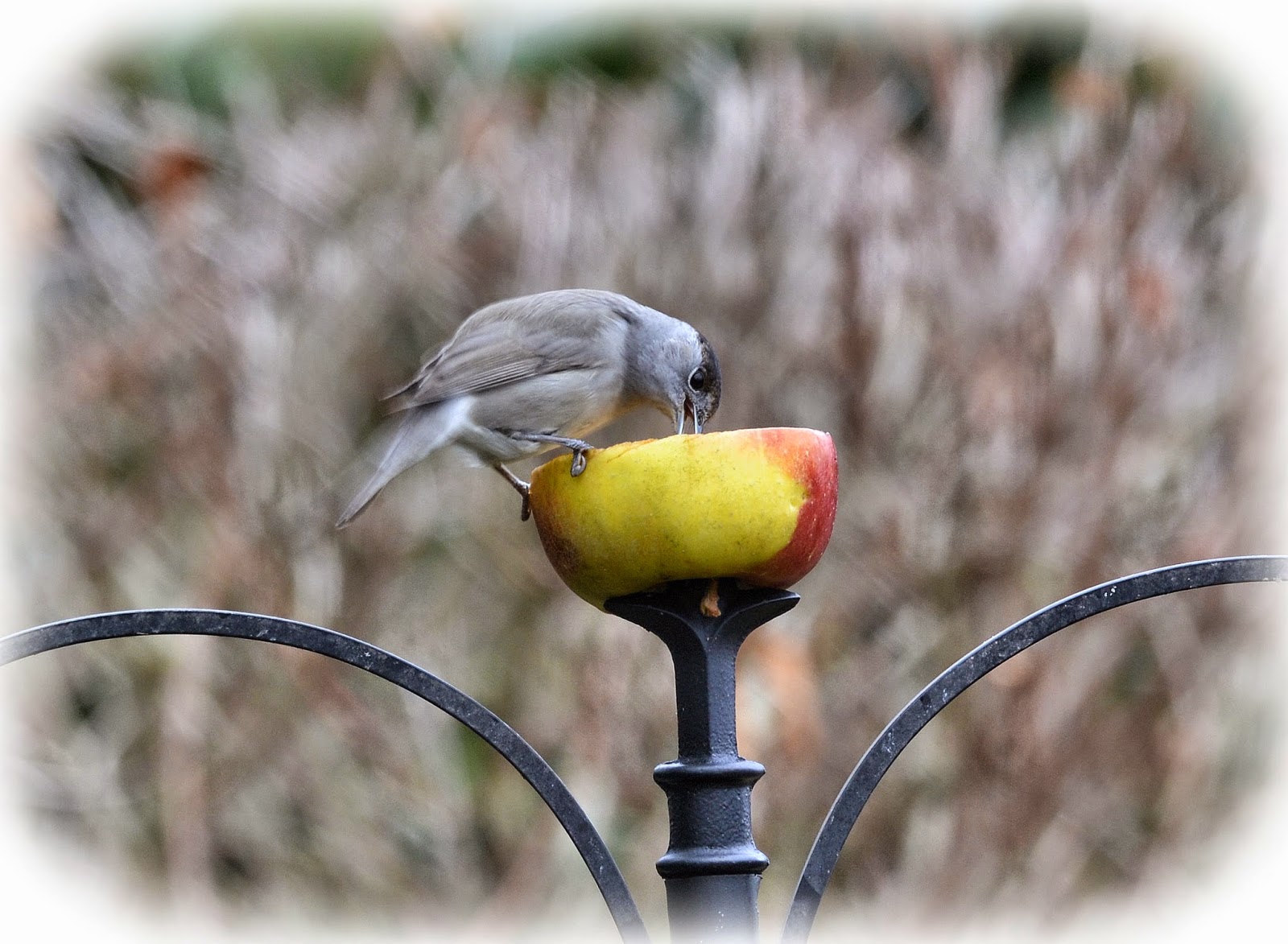 It's been around the garden now for the last few days, which leads me to believe that's its food source has become very scarce. 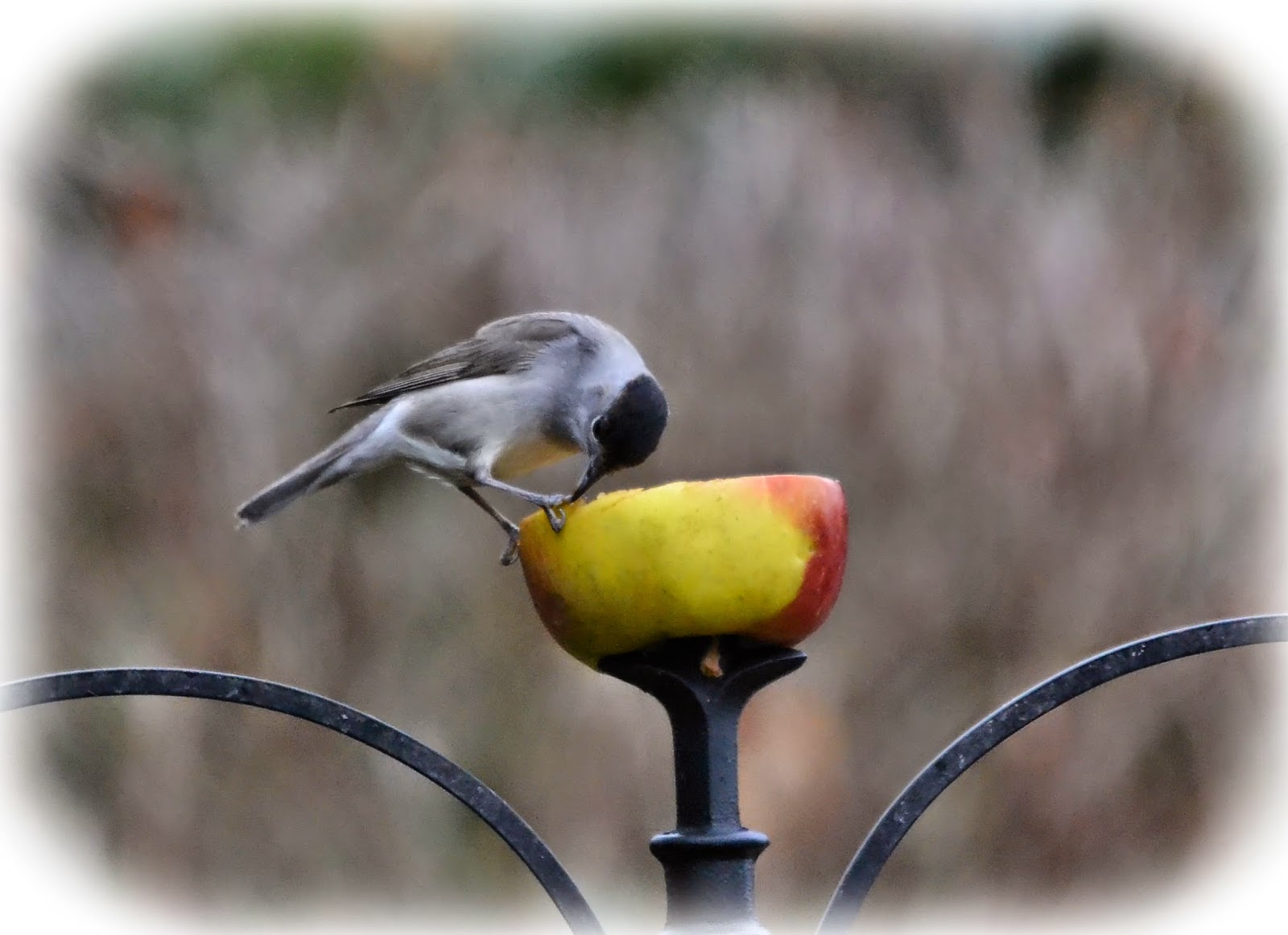 It's become very protective of these apples, it's almost as if  its set up a territory, because it will not tolerate any other small bird near its food supply. The strange thing is that apart from the Blackbird and Starlings, which it sensibly stands aside for. 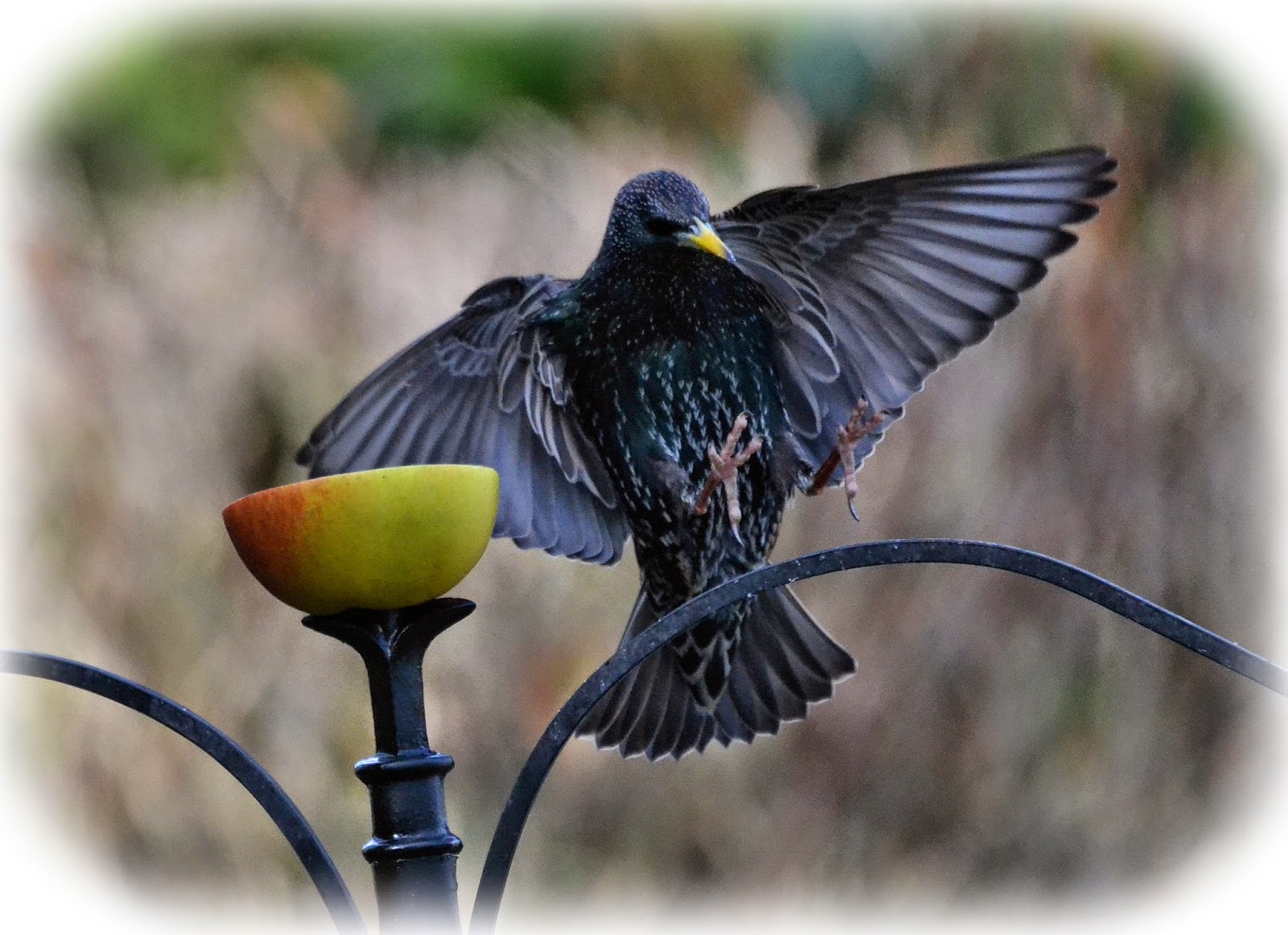 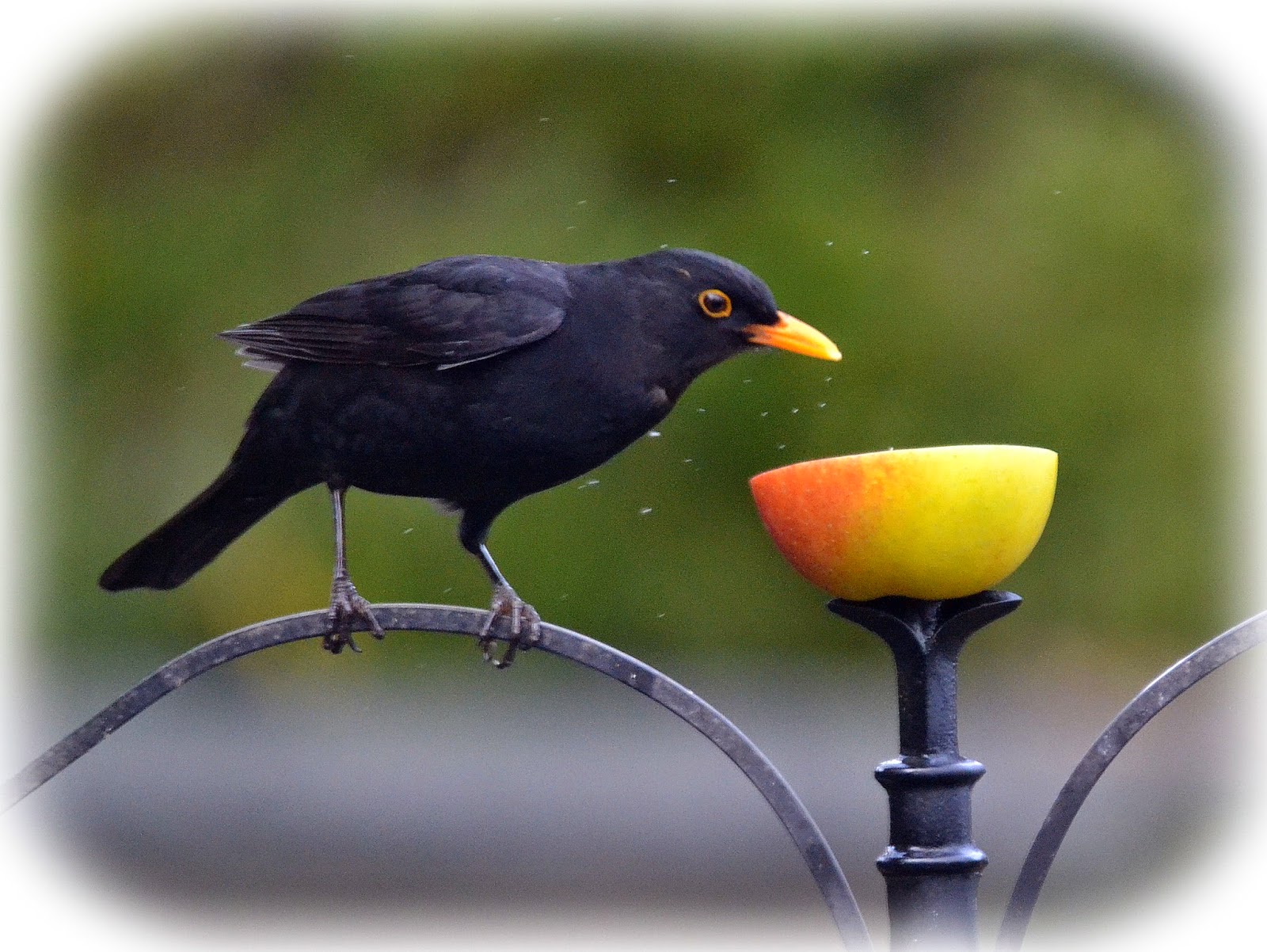 No other small bird is really interested in the fruit, but its still determined to drive away the finches and Tits that are trying to feed on the sunflower hearts close by, and these are not even trying to compete for the fruit.

This aggression has led to Chaffinches being chased back to the pear tree, Goldfinches and house Sparrows scared off the sunflower heart feeder and an aerial skirmish with the local Robin. You can just make out the Blackcap at the bottom of the picture. 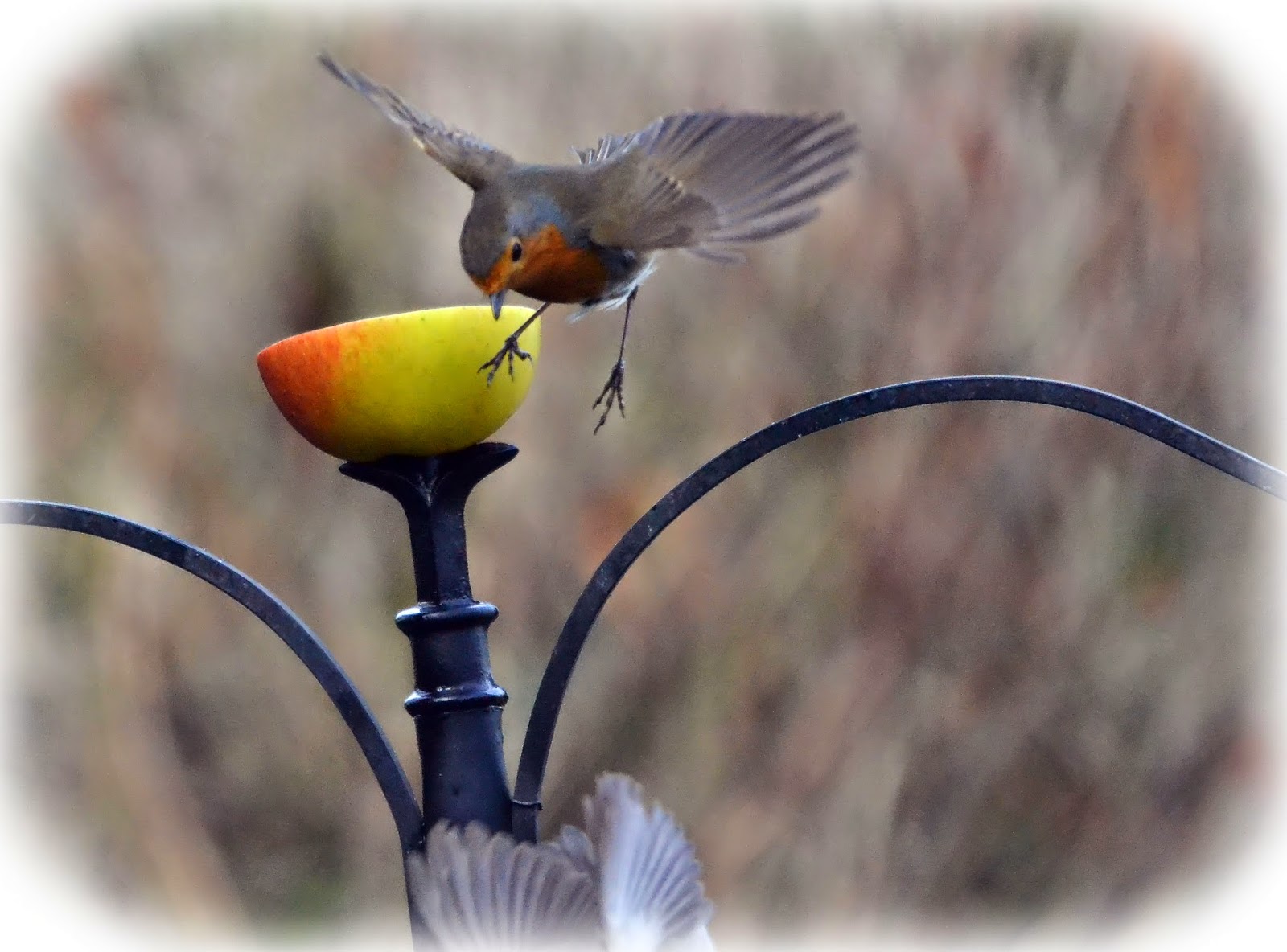 Attacks can come from all angles. 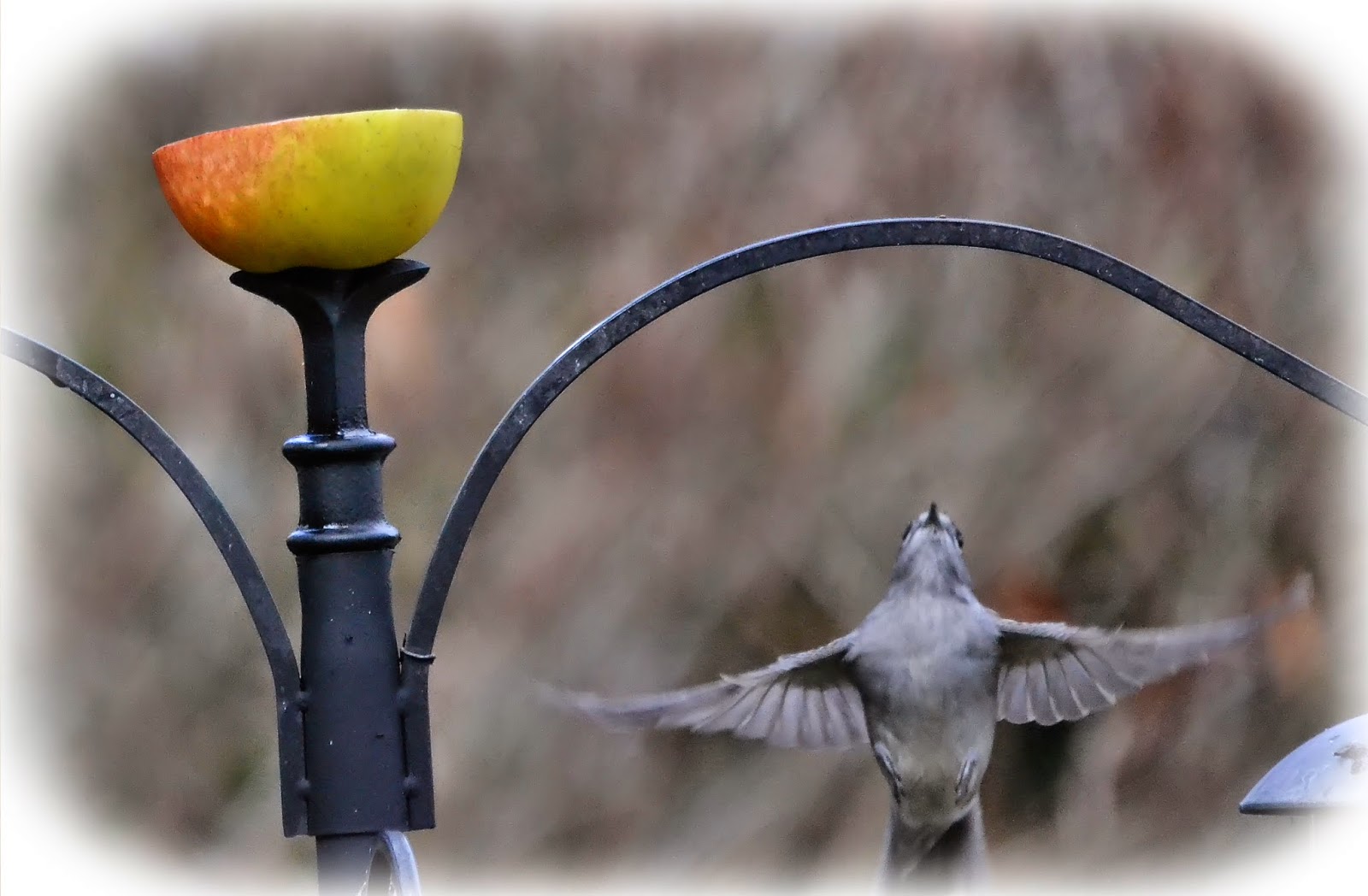 Its  been three days now and the Male Blackcap still spending most of the day around the apples. 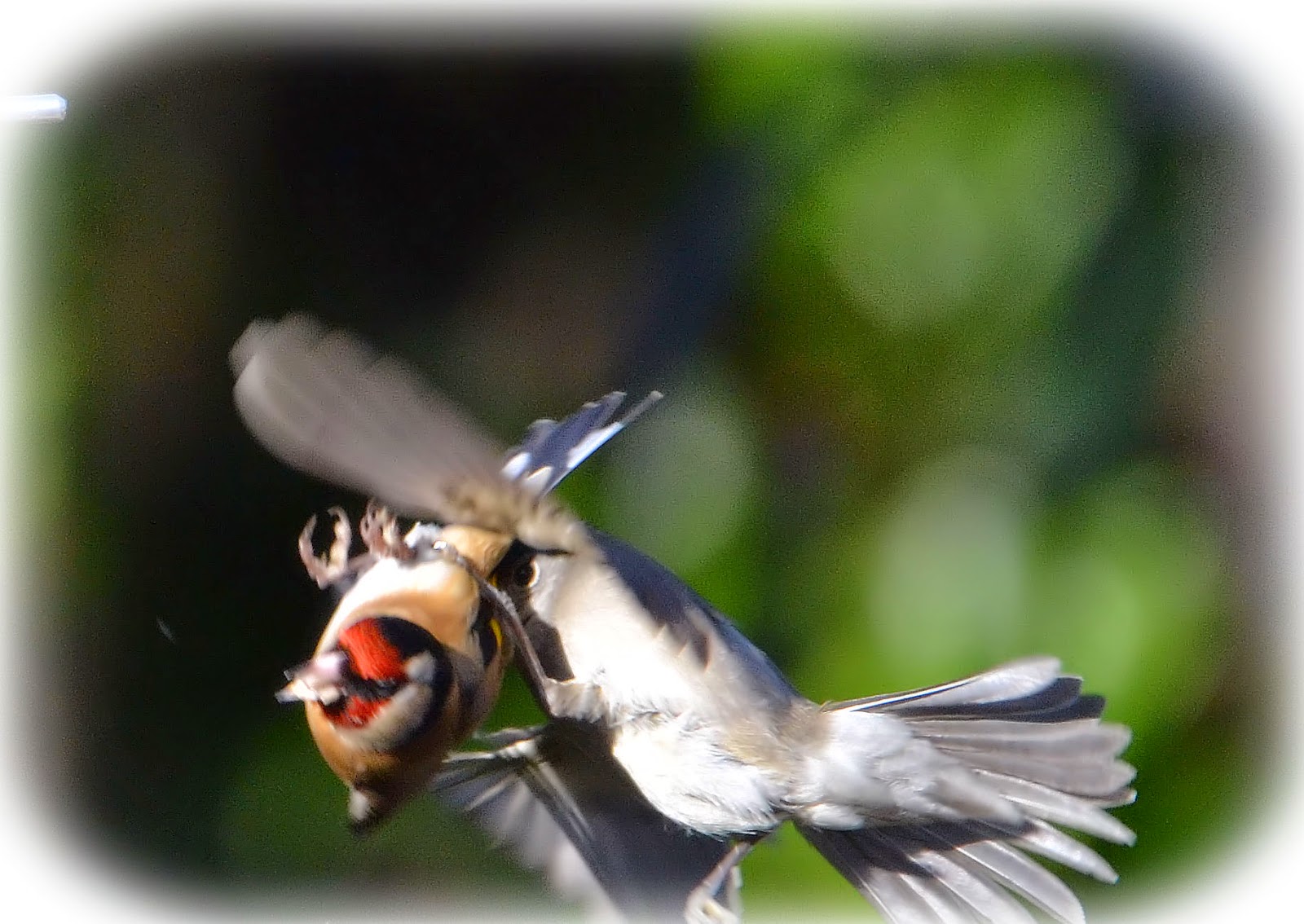 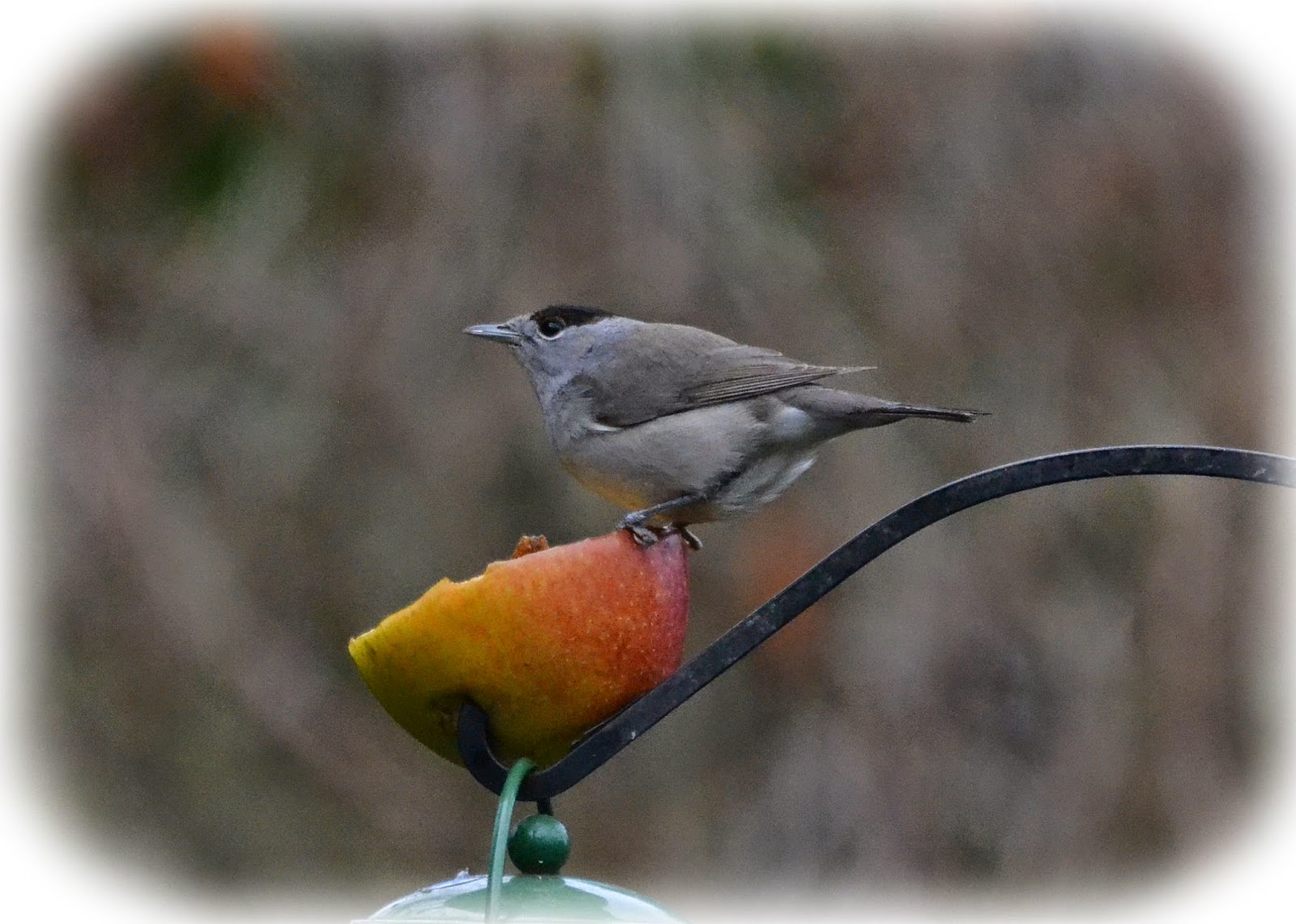 As I was watching the Blackcap guarding his apple, a movement in the ivy next to the patio window caught my eye, a female Blackcap, very shy, made no attempt to approach the apples or the male. 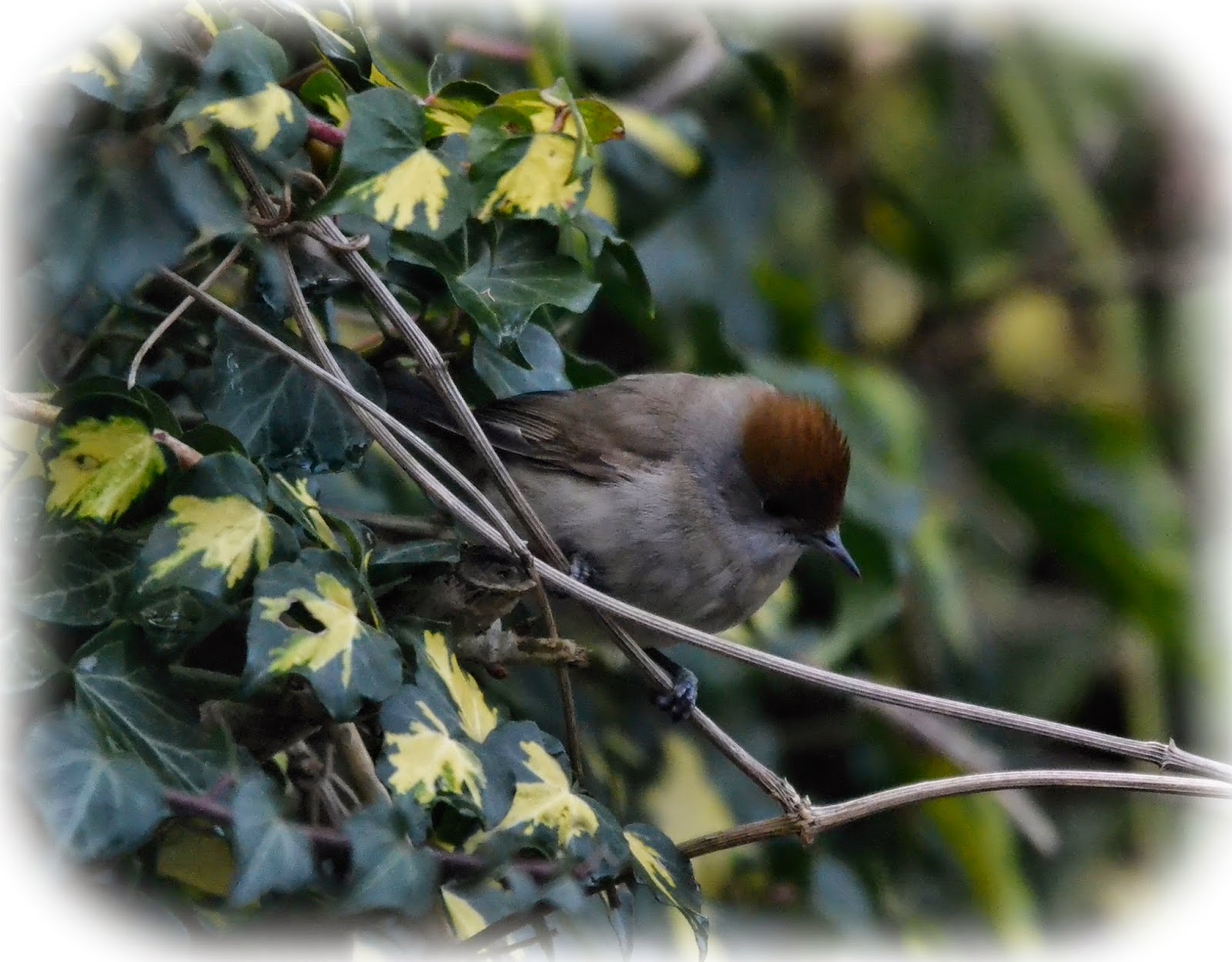 Even after removing the remains of the apple skins the Male Blackcap still reluctant to relinquish its food supply. 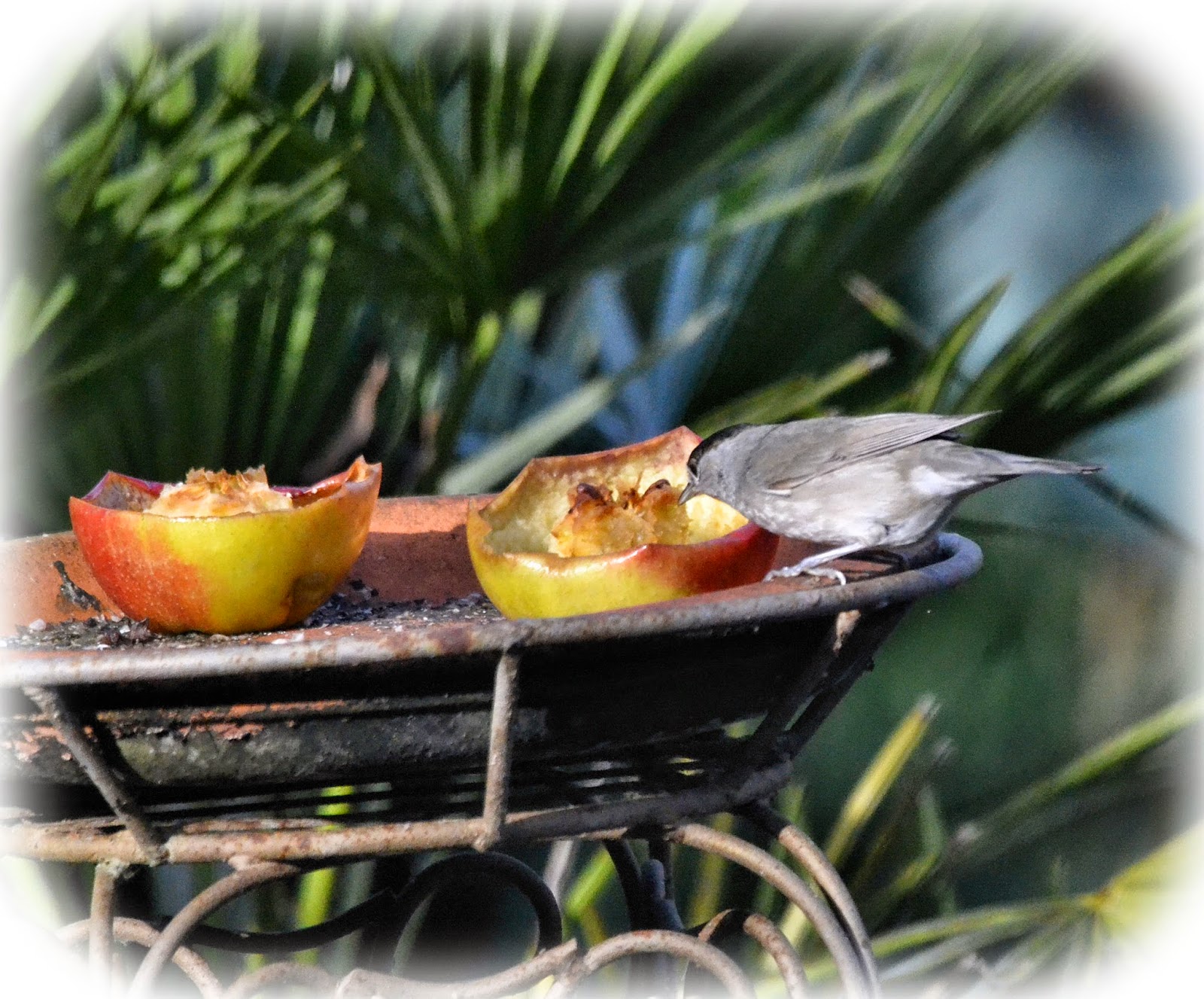 Day 5 and the male Blackcap arrived at the apple just after daybreak, where its been most of the day.


Had a lucky escape as the local male Sparrowhawk fence hopping along the gardens arrived on the fence, surprising all in the garden,


including me.
the Blackcap made a hasty retreat. 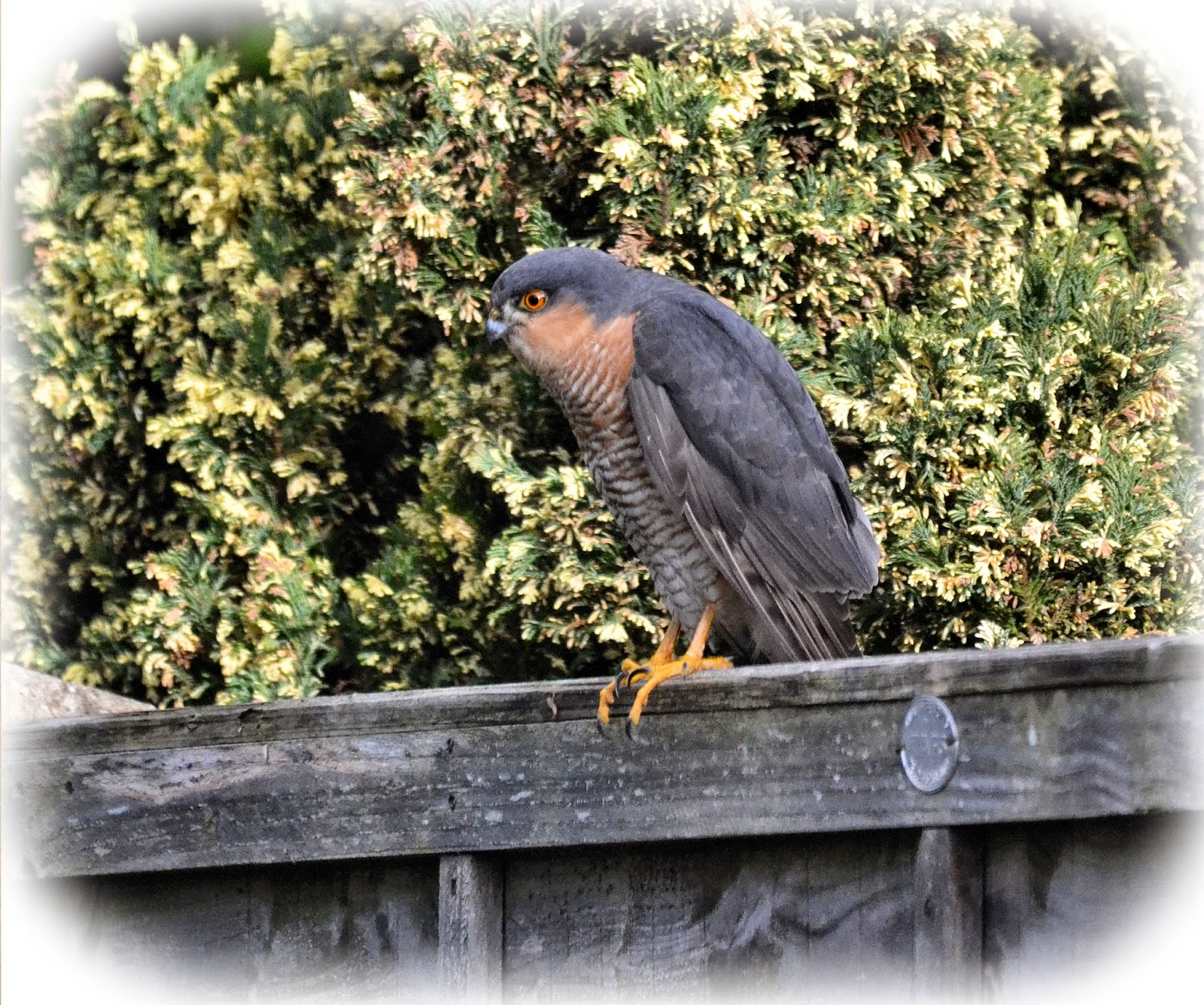 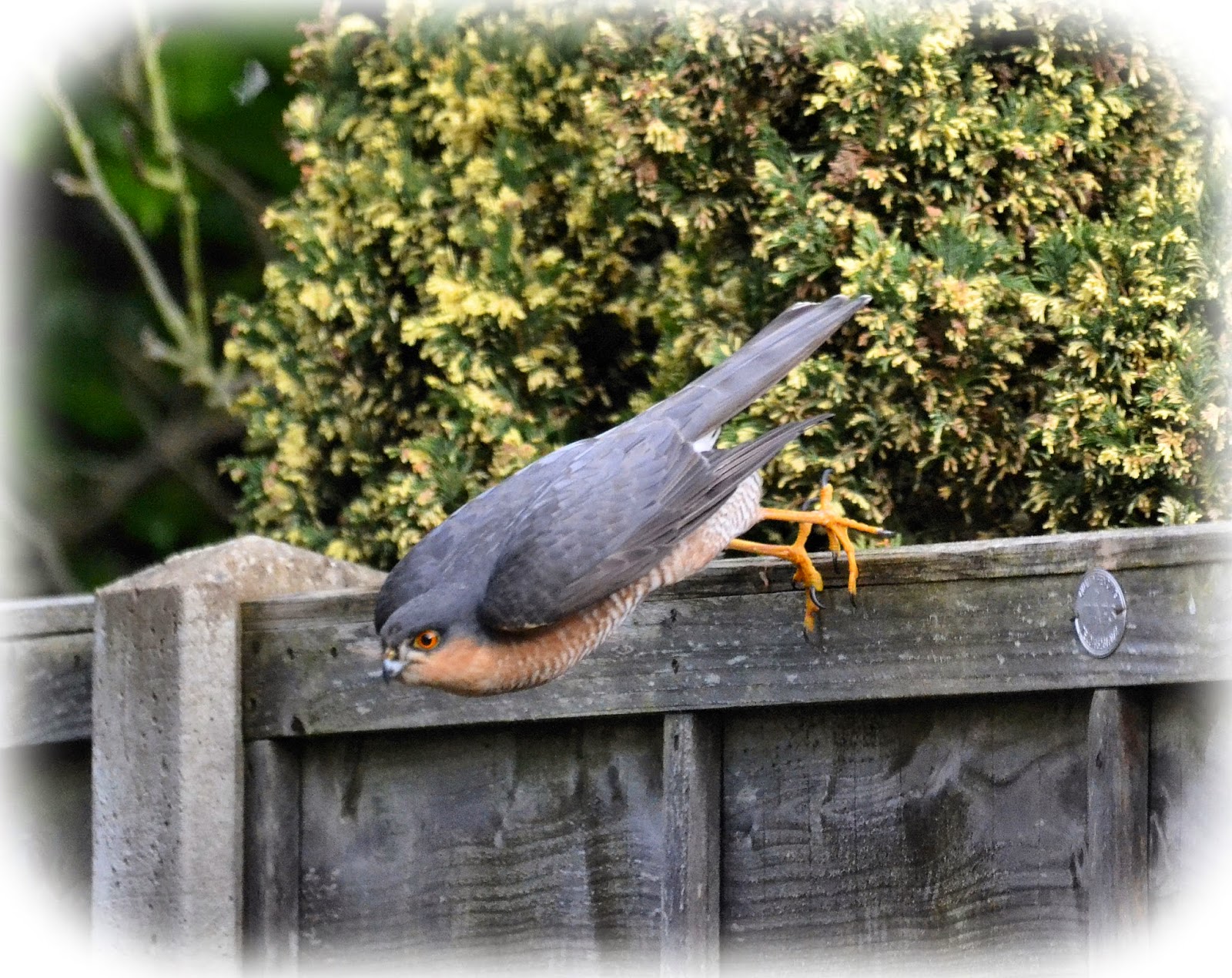 While watching the Blackcap, I was hoping the Wren might make an appearance, but no more sign of it, I did catch a glimpse of this Long tailed tit feeding on the Pear tree. 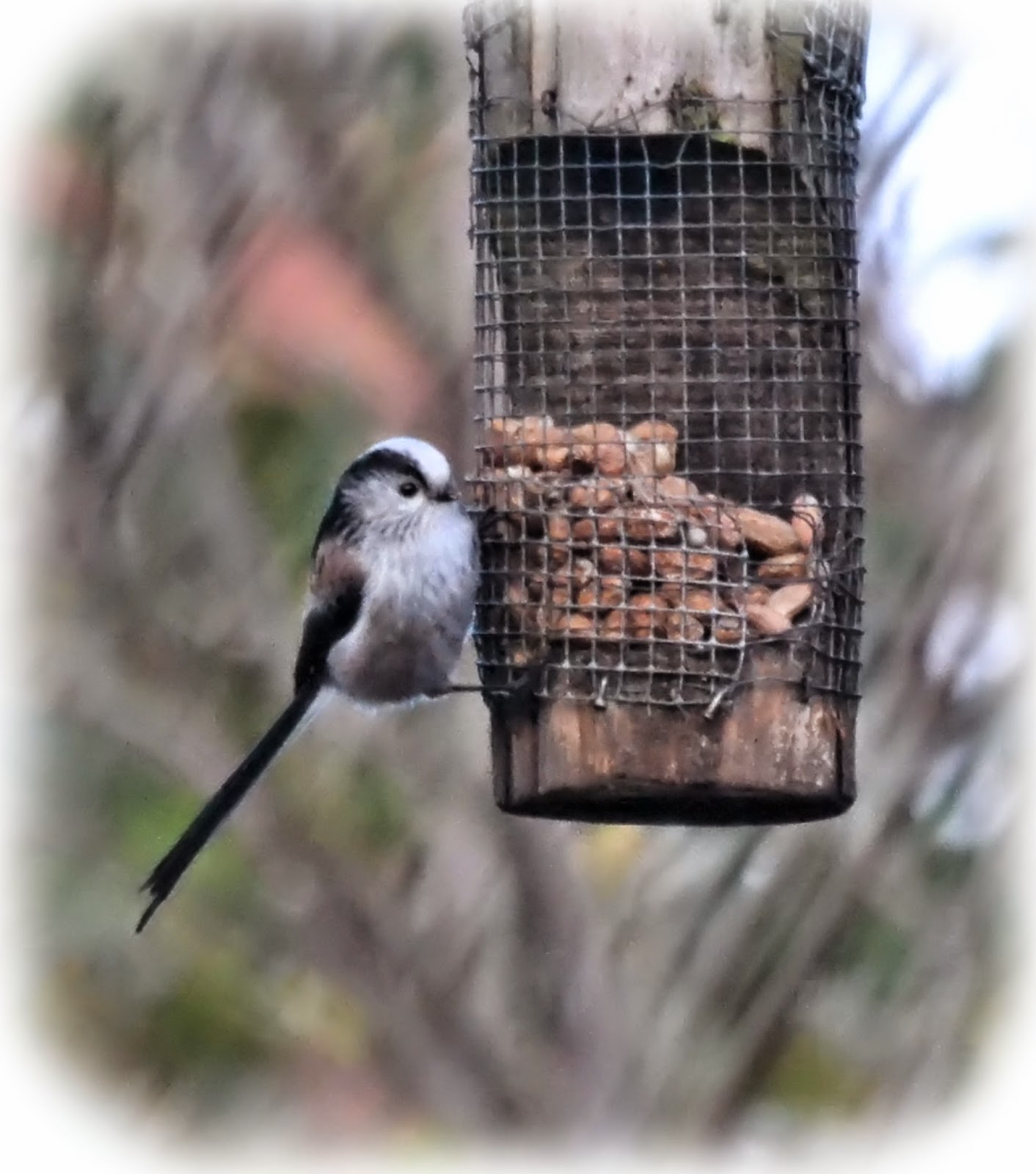 As this day draws to an end, as I glanced out the window, the blackcap was back again, looking very cold and fluffed up like a ball. 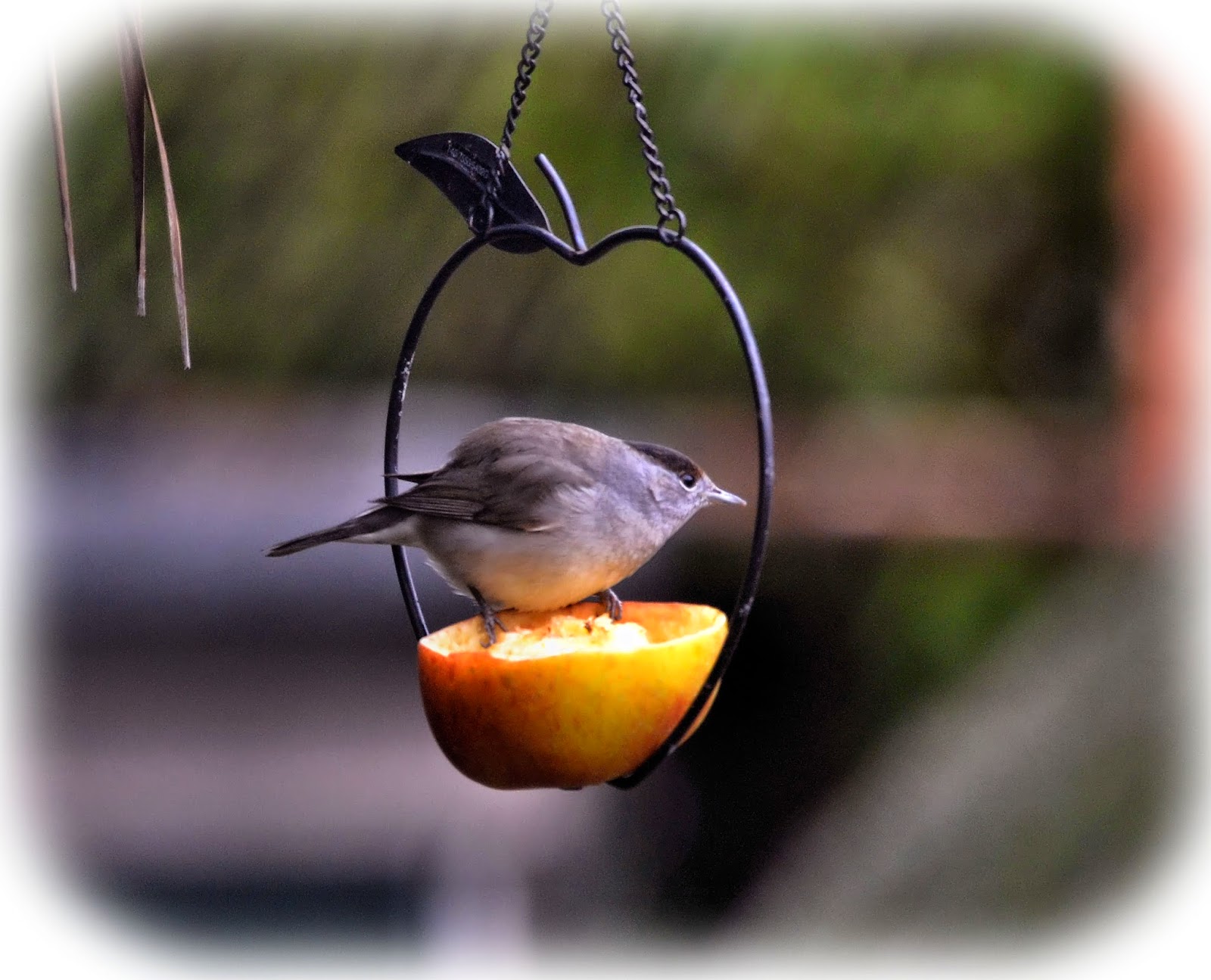 Its been interesting watching it these last few days, I was quite surprised how aggressive its been for a small warbler.
Hope it makes it through the winter and returns to its breeding grounds, probably back to Germany or there about.