Reculver Towers-Search for a Bunting !

There was a time when the search for a Snow Bunting meant a timely visit to Shellness on the Isle of Sheppey, where more often than not a flock of Snow Buntings usally numbering 30 plus would  be in residence for the winter. I can't remember the last time a largish flock has been around North Kent.

To see one of these lovely Snow Buntings now, a trip to Reculver Towers is usally a good bet, just recently there have been up to six individuals feeding along the shingle ridge between the Towers and Coldharbour Lagoon.

Unfortunately my trip coincided with a dog walker who proceeded to walk along the beach with his hyper-active spaniel,with no regard to waders feeding along the tideline, much to the annoyance of the birdwatchers searching for the Buntings. Fortunately he turned around  before reaching the Lagoon.

A single Grey Plover looking for a meal as the tide came in gave me a nice photo opportunity as a wave caught him unaware. 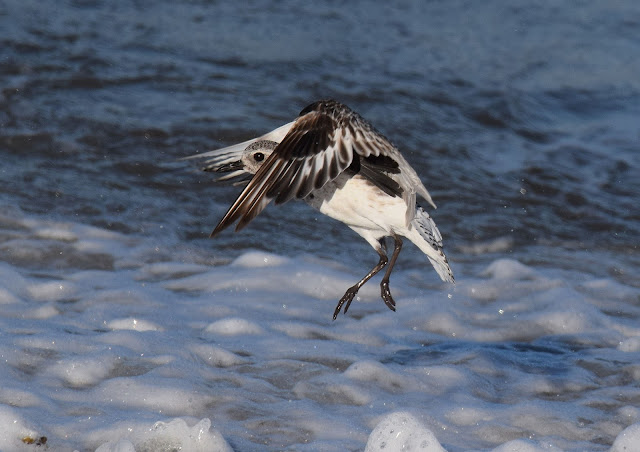 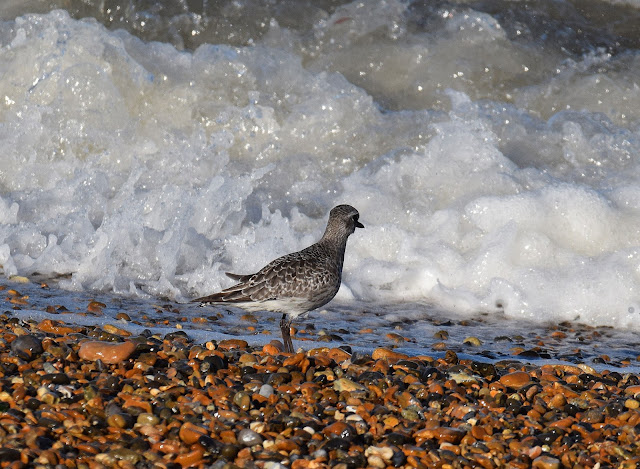 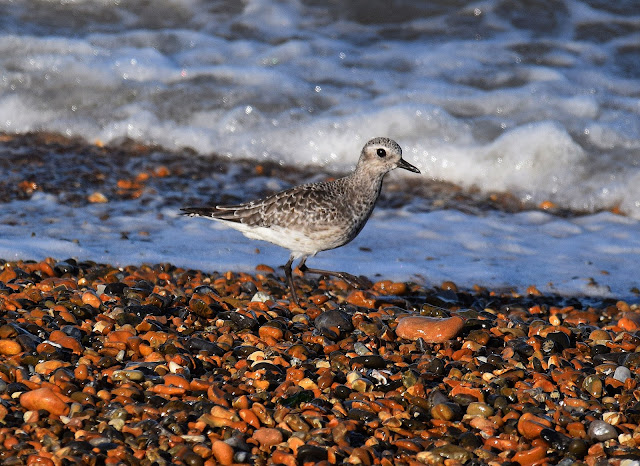 As I reached the far end of  Coldharbour Lagoon, three Snow Buntings were feeding on the Ridge, one Bunting gave me a fleeting glimpse, before dropping down the far side of the ridge and out of view, frustratingly not to reappear again.

Before starting the long walk back to the Towers I noticed a Dunlin, posibly a first winter juvenile feeding on the Lagoon, just starting to moult into its winter plumage, most of the Dunlin I have seen recently have all been in full winter plumage. 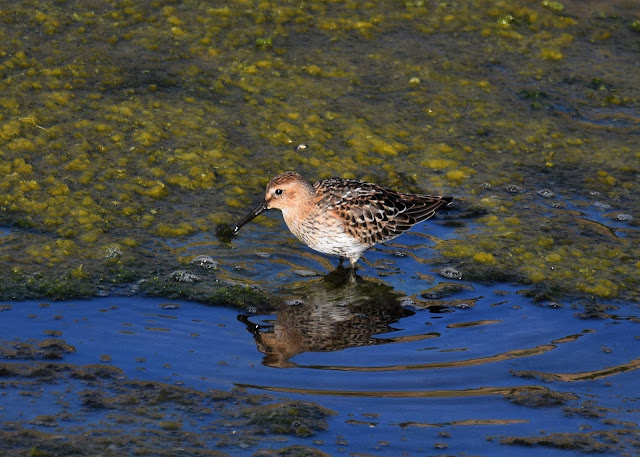 So no photographs of a Snow Bunting which I really wanted, looks like another trip to the Towers is on the cards very soon.

The possibility of a Firecrest Sighting tempted me back across the River Thames to Rainham RSPB, unbelievably no traffic holdups. the reserve were reporting a possible three Firecrests on the reserve, a species I don't see very often, and a late report of a Short Earred Owl returning for the winter would be a bonus.

The local Pheasants have worked out that theres a free meal available from the spillage around these feeders, when the sun is shining, the cock Pheasants look pretty spectacular. 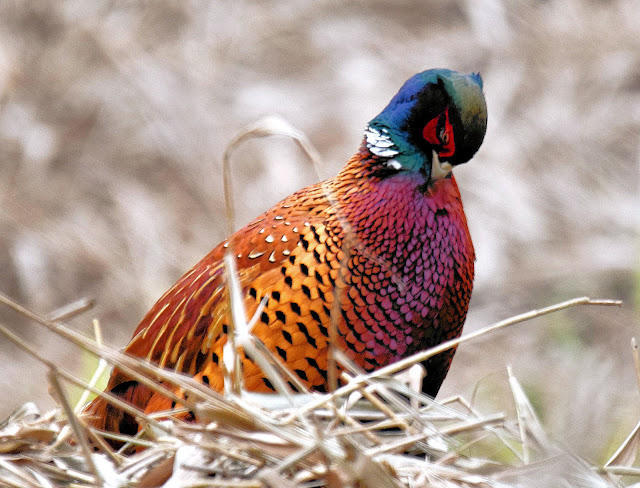 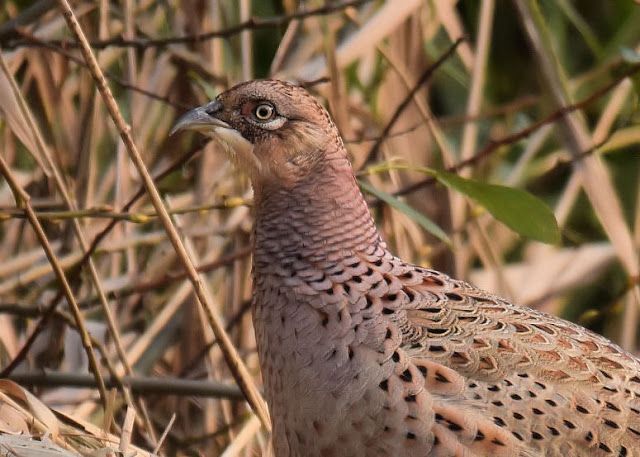 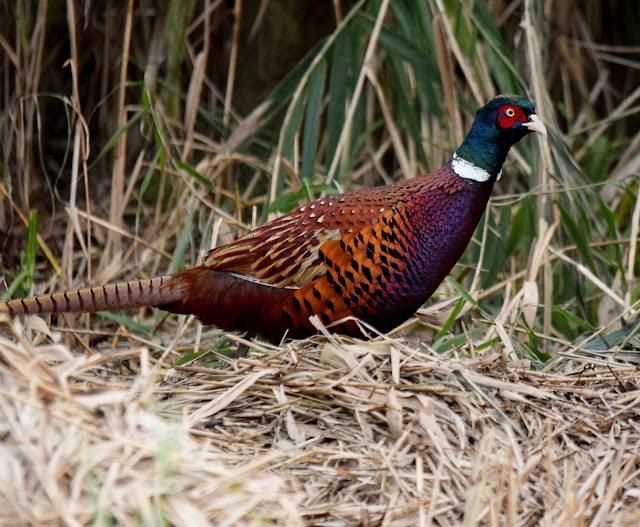 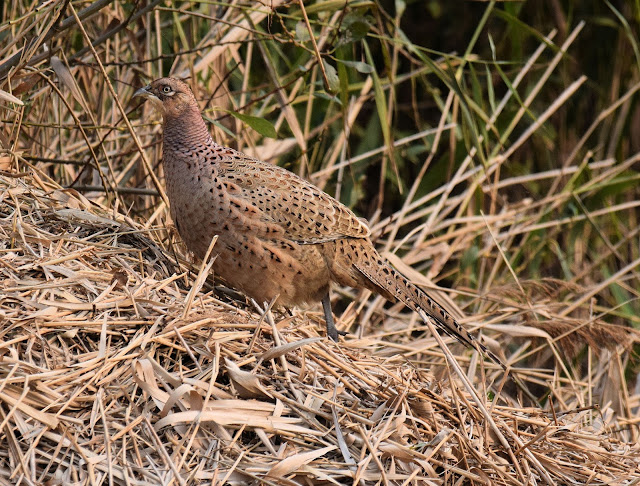 The view in front of the Ken Barrett Hide was birdless , just a distant Marsh Harrier.
Little Egrets are quite numerous here and scattered widely around the reserve, always worth checking out. these two were chasing each other around the reedbeds.

At the Shooting Butts hide, the usual birds in front of the hide, Wigeon numbers building up.

Called into the MDZ hide on the offchance the Kingfisher was around, had two Kingfisher fly-bys, but did not perch on any off the strategically placed fishing perches.

The Purfleet hide produced a few Snipe on the muddy fringes of the islands.

So , no Firecrests, no Short Earred Owls on this occassion, but winter has only just begun,
plenty of time to see the Owls.


As I stared out across the East Flood at Oare Marshes , a large flock of birds took to the air in the far distance, and I do mean very distant, but as the flock started to wheel around the sky the distinctive shape of a ' Murmuration' was forming.

Its been a long time since I have witnessed this spectacle, so long in fact, I can't even remember the last time I came across one.

This murmuration, which I am assuming were Starlings lasted  probably less than sixty seconds at about 15.50 hrs late afternoon, before it melted away, and the birds sank back down to their evening roosting site.

I fired off a few camera shots which shows the amazing 'shape shifting' movements of the flock. not brilliant but you get the idea. 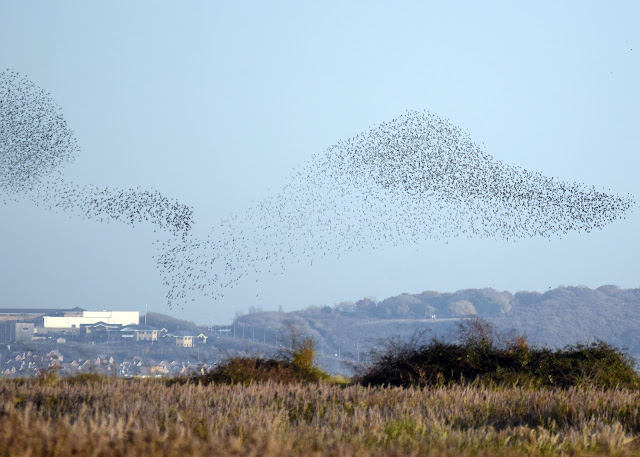 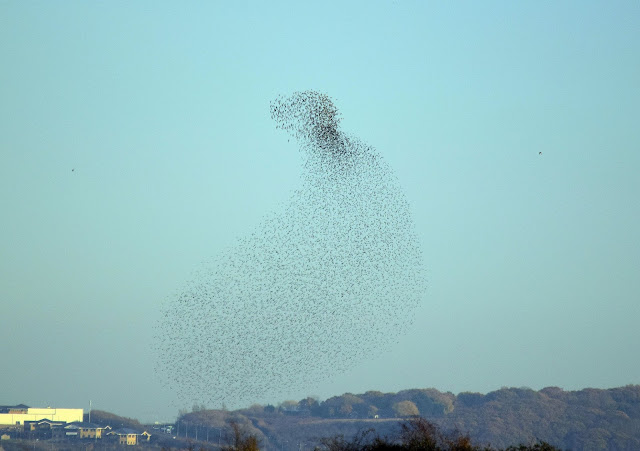 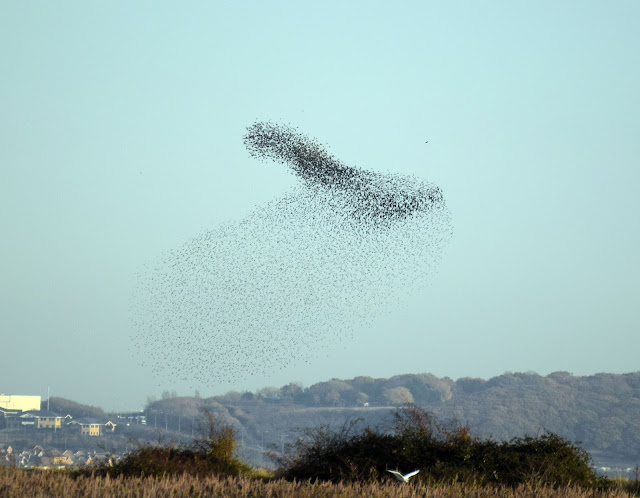 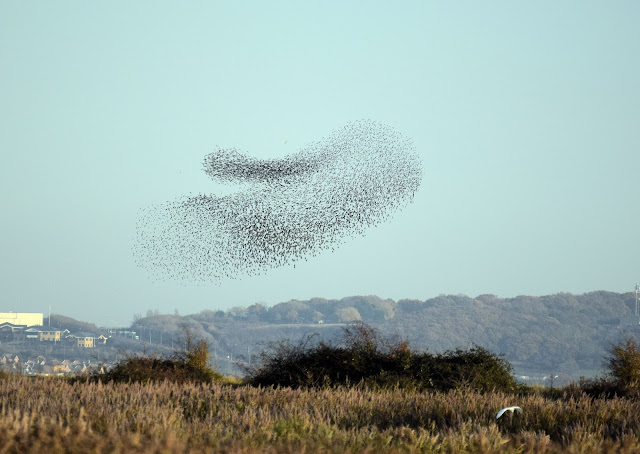 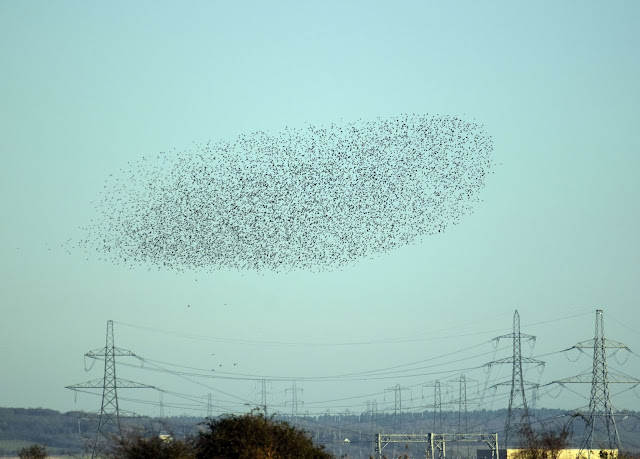 I must make an effort to locate another site where a  spectacle like this can be seen, a nice sunset  to go with it, is probably to much to ask for.

An afternoon stroll around the estate of Leeds Castle in Kent didn't deliver any surprise wildlife sightings,  a Great Crested Grebe on the castle lake and a nice Kingfisher perched on an overhanging tree again on the castle lake were the highlights.

But I found some interest in the captive Black Swans scattered around the estate lakes, which now number eight pairs.

I remember many years ago seeing Black Swans at Dawlish in Devon, seemed to be at home there, I wonder if they still frequent that area, been a while since I last visited .

Lady Baile had a love of Birds and for many years a large collection of exotic birds were kept in her private aviaries. These have long gone now, closed down in 2012 to save money, although there is still a relatively small Bird of prey centre in the grounds.

But the Black Swans seemed to have survived and flourished and appear to be regular breeders on the lakes at Leeds, 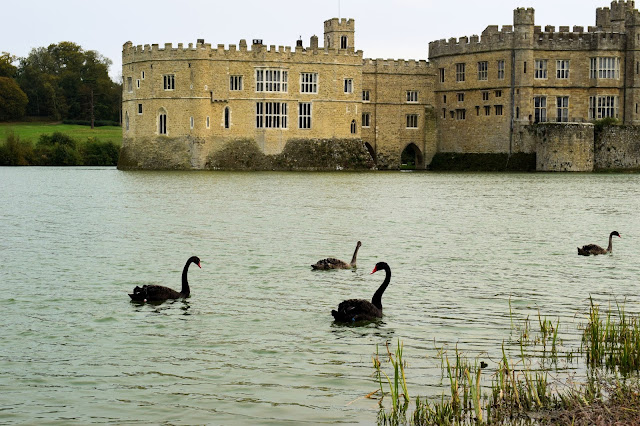 I have read that many Black Swans have escaped private collections around the country and are breeding at many sites.

[Black Swan is listed under Schedule 9 to the Wildlife and Countryside Act 1981 with respect to England and Wales. As such, it is an offence to release or allow the escape of this species into the wild.]

A piece of legislation that appears not to be working .

Some research by the British Trust for Ornithology found back in 2004, Black Swans were recorded at 73 sites with only 11 breeding pairs. In 2009 that there were at least 500 reports of Black Swan at 170 different locations, but of these only 37 locations had breeding pairs.

So numbers are increasing and there is evidence that the Black Swan population is nearly large enough to become self sustaining and may be added to the authorative " British List" of birds found in the UK.

I must admit I have not come across any in the wild, only those in private wildfowl collections.

The Black Swan is said to be more aggressive than its white counterparts to both human and other wildfowl especially when it comes to protecting its chosen territorial waters. these at Leeds appear friendly enough.

There seems to be some mixed opinions that they may be a threat to biodiversity, as they compete with other species for food and habitat. No proposals at present to control the numbers in the wild, so they're safe for the moment from DEFRA


Apparently these Black Swans can breed at any time of the year, although the Juveniles find it difficult to survive our winters, At Leeds castle they have had seven Black Swan cygnets this year 2017, some of which you can see in these photographs, hope they make it through the winter. 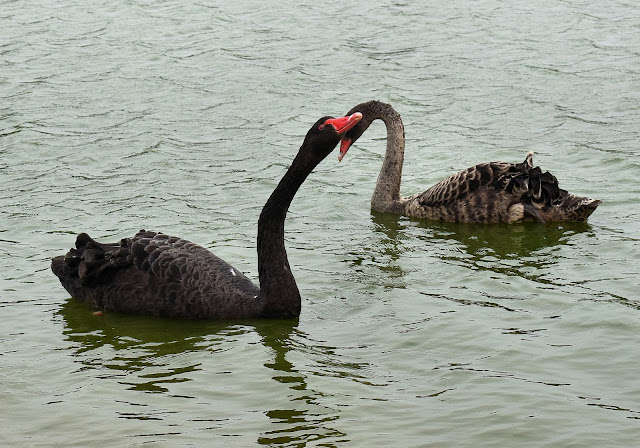 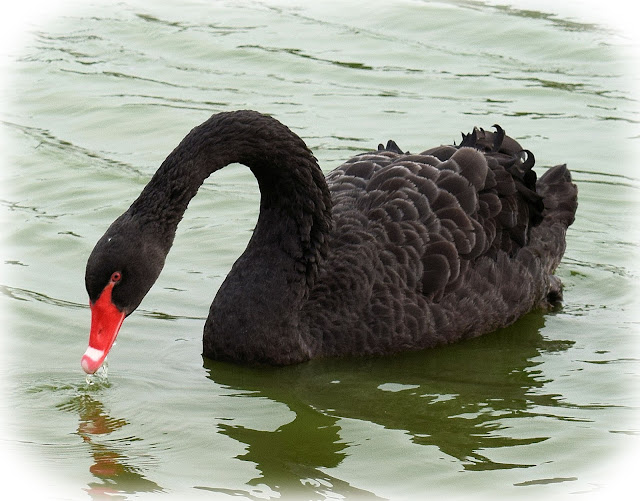 Certainly an eye-catching bird to see, even in a private waterfowl collection.