Its getting to be a regular occurrence with Great Northern Divers appearing at Chatham Maritime, always on number Two Basin which is obviously to their liking, usally appearing early December and staying until late January.

A quick check of the Kent records for this site shows the following appearances :-

These have all been Juveniles. the photograph below is of the latest Juvenile seen  by me on the 16th January.

Annoyingly the Divers always seem to be in the middle of the Basin, and these are quite large expanses of water, today their was an eye-watering wind blowing across the basin which made viewing very difficult,  always too distant for my camera, but surprisingly, some reasonable images, even with a shaking hand.

The photograph below shows the 'scaly' effect of the first winter plumage on the back,
apparently indicating a juvenile. 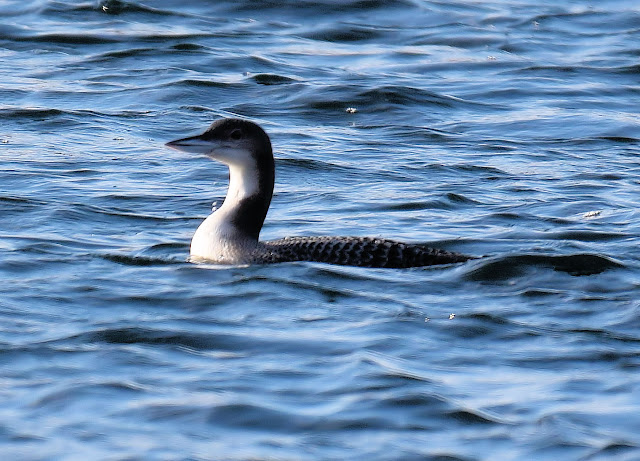 The steep forehead, whitish eye ring and half collar diagnostic features of the Great Northern Diver shows well on the photograph below. 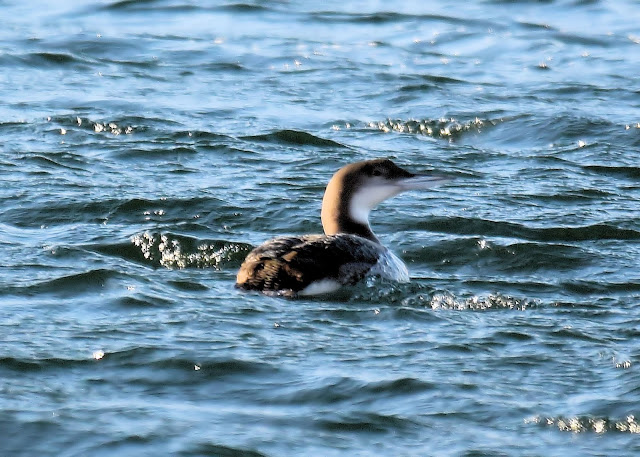 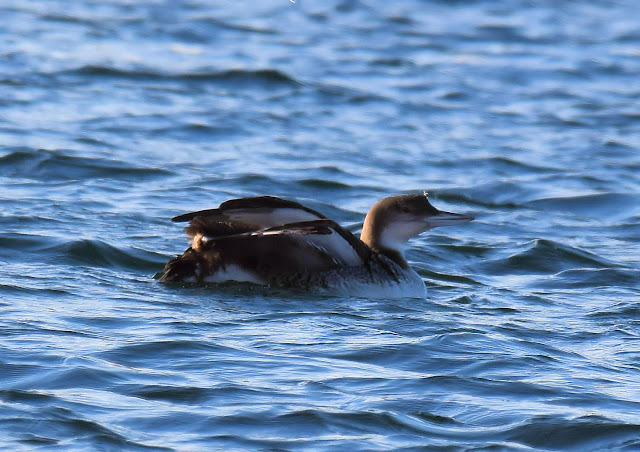 These Divers have dark red eyes, although not clearly shown here which helps them see underwater, they have a habit of dipping their head under the surface, searching for fish which they chase down, being very powerful swimmers, they can eat these fish underwater although some of the larger fish caught are brought to the surface, I have seen many photographs of these divers eating Crabs which they must also be rather partial to. 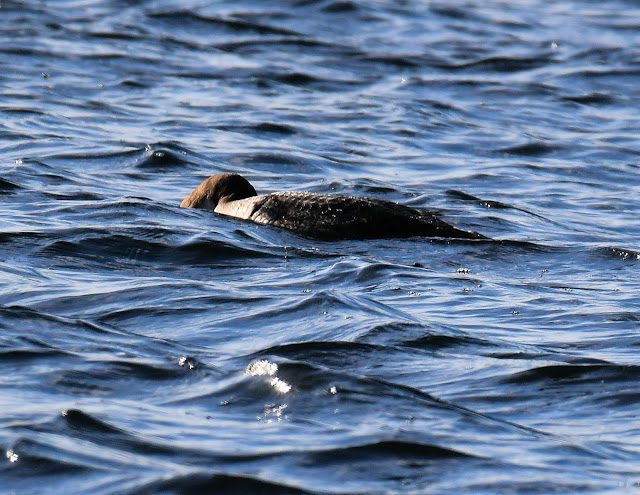 These Divers will be returning to their Icelandic breeding grounds soon, around April time, so its nice to catch up with them when they do visit these inland waters.


Thirteen days into the new year and my first opportunity to get out for some wildlife watching, a quick drive down to Thannet, my destination Reculver Towers and another opportunity to look for Snow Buntings, these Buntings blend in with the shingle tide line very well, and unless they fly up in front of you, pretty difficult to locate, as was the case for me once again. And so after the long cold walk down to Coldharbour Lagoon and back, no sign of the Snow Buntings.
I did manage to see good numbers of Brent Geese flying low along the coast line.


Other birds noted along the tide line included, a small flock of nine Ringed Plovers and a single
Sandling,  a couple of Turnstone, Oystercatchers and Redshank.
On the sea , Great Black Backed Gull, Herring Gull, Common Gull and Black Headed Gull and a few Cormorant.
In the bushes on the other side of the sea wall,  Linnet, Reed Buntings and House Sparrows with a single Stonechat.

It was now early afternoon, I thought I'd try my luck on the Isle of Sheppey as I was passing that way,
always a chance of  a Hen Harrier or a Short Earred Owl around  the Capel Fleet area, the Raptor View point was rammed with birdwatchers, birding scopes pointing in all directions, not for me, I find myself becoming more and more anti-social the older I get, so I moved on down the road that cuts through Capel fleet, lots of Red legged Partridges scurrying around the roadside verges, it would be nice to come across some Grey Partridge, but these are becoming harder to locate.

The Bramble scrub is always a good place to check for Corn Buntings along this road, but they always seem a bit to distant for my camera, fortunately I came across one on the road side power line taking in the late afternoon sunshine.

One last opportunity still remained, the entrance track to Elmley NNR is always worth checking for late afternoon Raptors, although I was also  hoping for  a sighting of some Hares.
Good numbers of Lapwing all along the track,  two Ruff feeding on a roadside pool were a surprise, a few Curlew were disturbed, a few Raptors were seen, a couple of distant Marsh Harriers, two Buzzard.

The entrance track to Elmley is a good mile or so leading to Kingshill Farm and the car park, just enough time to turn around and make my way out before the gates are locked, as I scanned the fields adjacent to the track, a white bird caught my eye quartering the field just behind me, a Barn Owl, hunting in the late afternoon daylight, the Barn Owl quartered the fields all around my car, allowing me in my excitement to grab some images. 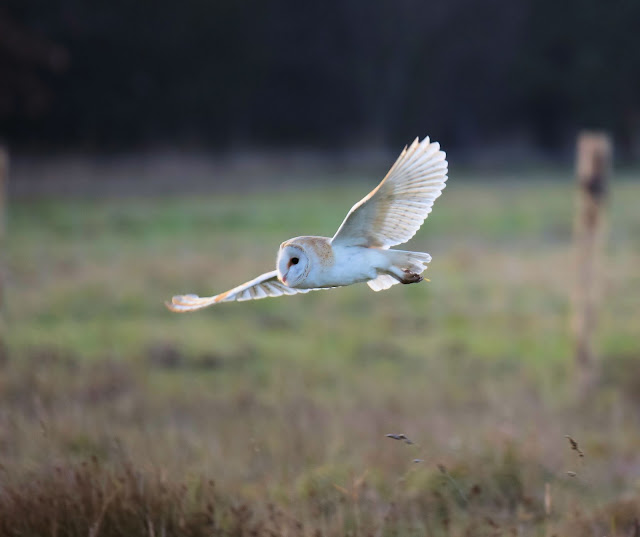 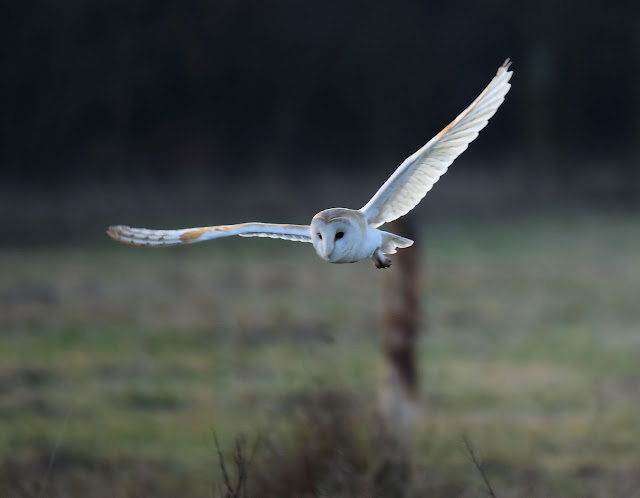 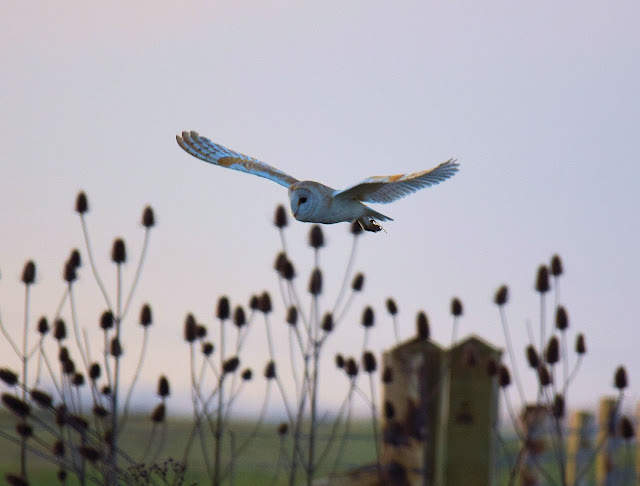 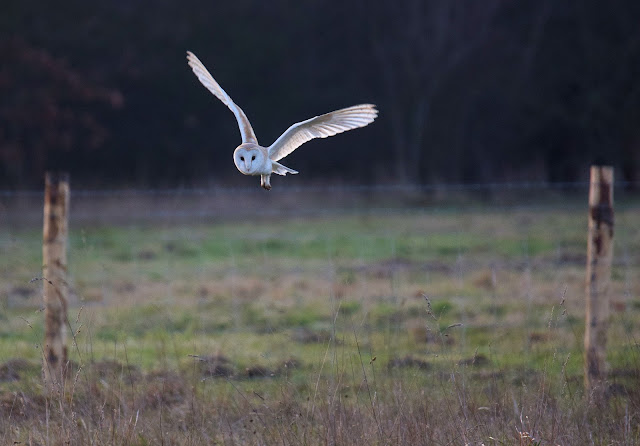 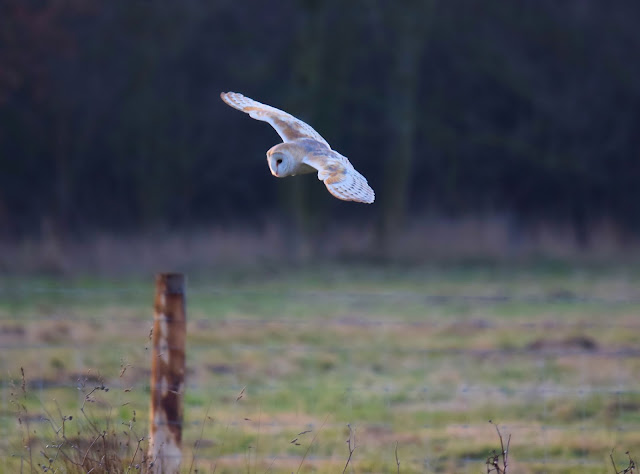 Good fortune was now smiling upon me, or so it seemed, the Barn Owl swooped down into the long grass not more than twenty feet away from me, It glanced at me a few times with those large black eyes, but remained there for a few minutes, occasionally stabbing down with its beak. 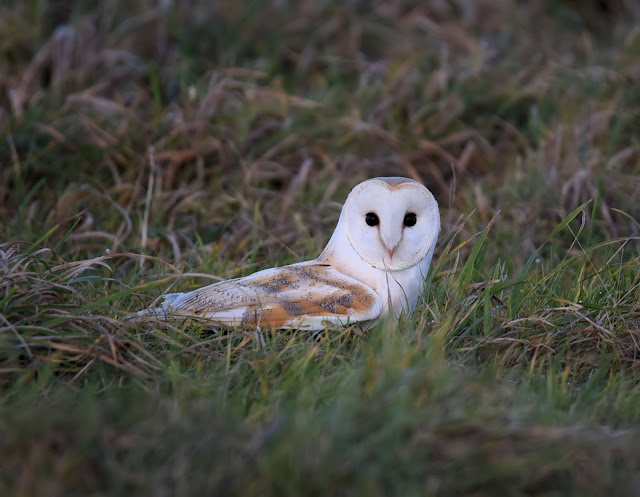 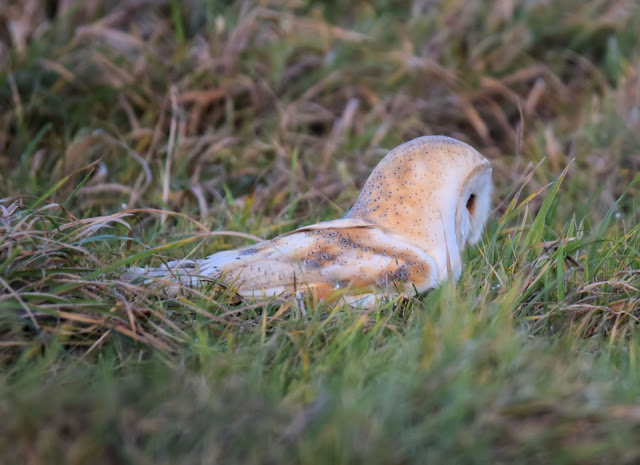 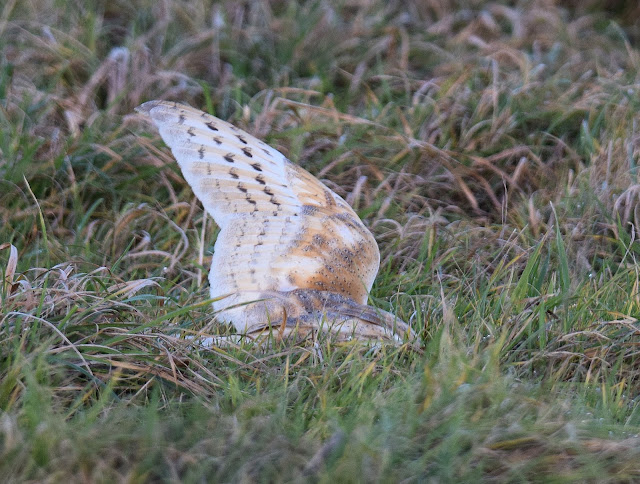 Unseen by me the Owl had successfully captured a vole and was obviously dispatching it, and it was not until it decided to take off that I could see the prey.

Interesting to note how the feathers over the beak are raised after the prey capture, see first image when feathers laying flat over base of beak. 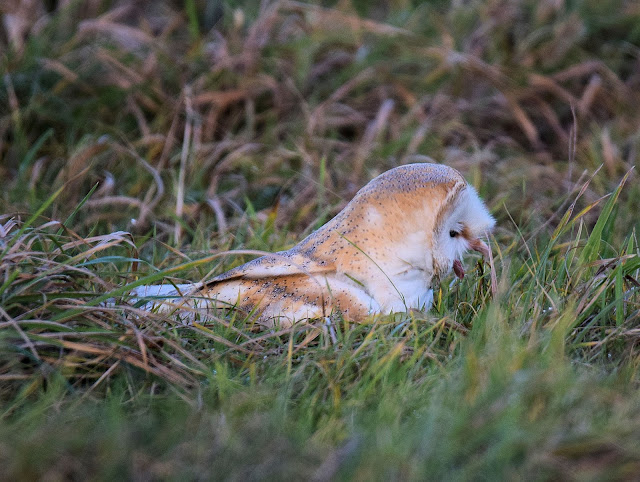 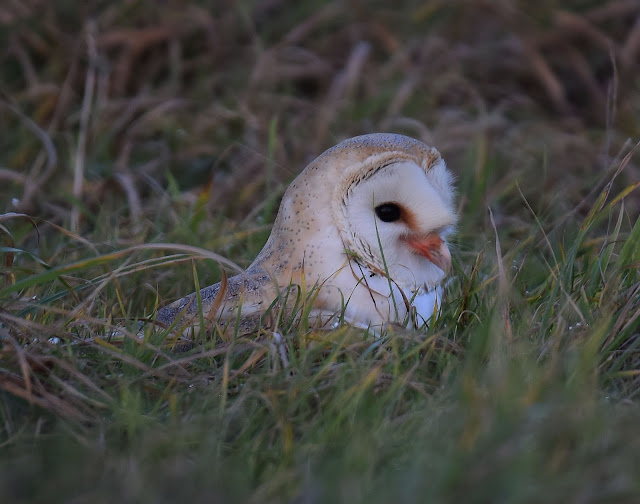 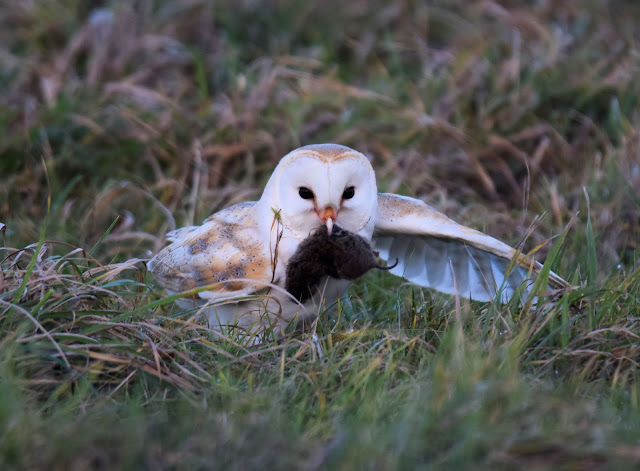 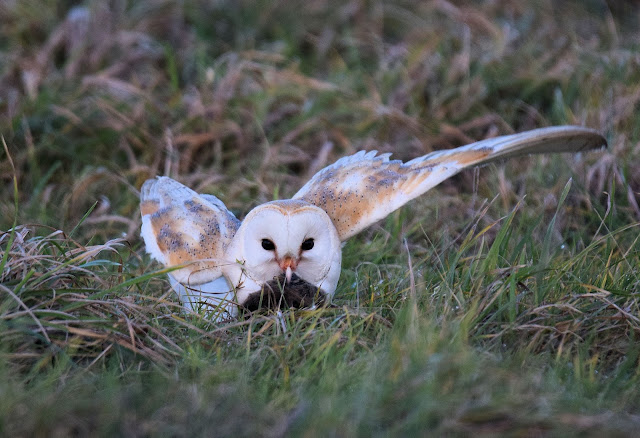 What an ending to the day, its moments like this that make it all worth while.