Blue with a touch of Yellow !

Spent a couple of hours at Rainham RSPB today, much busier than usual with many people keen to see the Spotted Crake thats been showing on and off for the last few days.

For my liking, the Crake was far too distant to wait around for the odd glimpse, so I wandered around the reserve, seeing what else was on offer.

There seemed to be a bit of a blue theme running through my sightings today, starting with this Southern Hawker
or " Blue Hawker" seen within the cordite store.

There were two Southern Hawkers, one  resting on the buddleia bloom, another on some brambles within about  five feet of each other. This is another first for me, really pleased with these sightings.

Not the best Photographs, very muddled background, but you can clearly see the blue bands across the last three segments of the abdomen, making these males I believe. 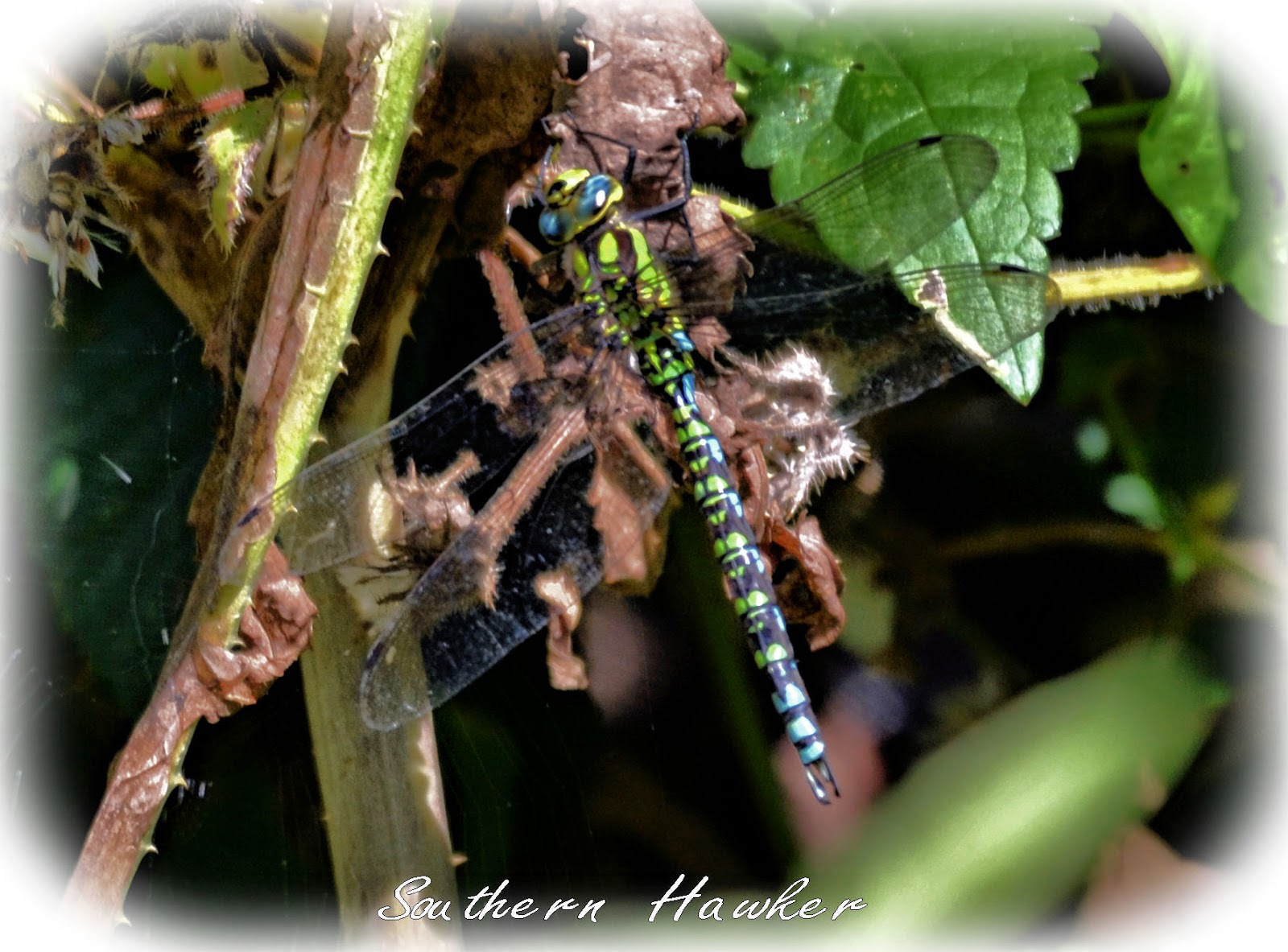 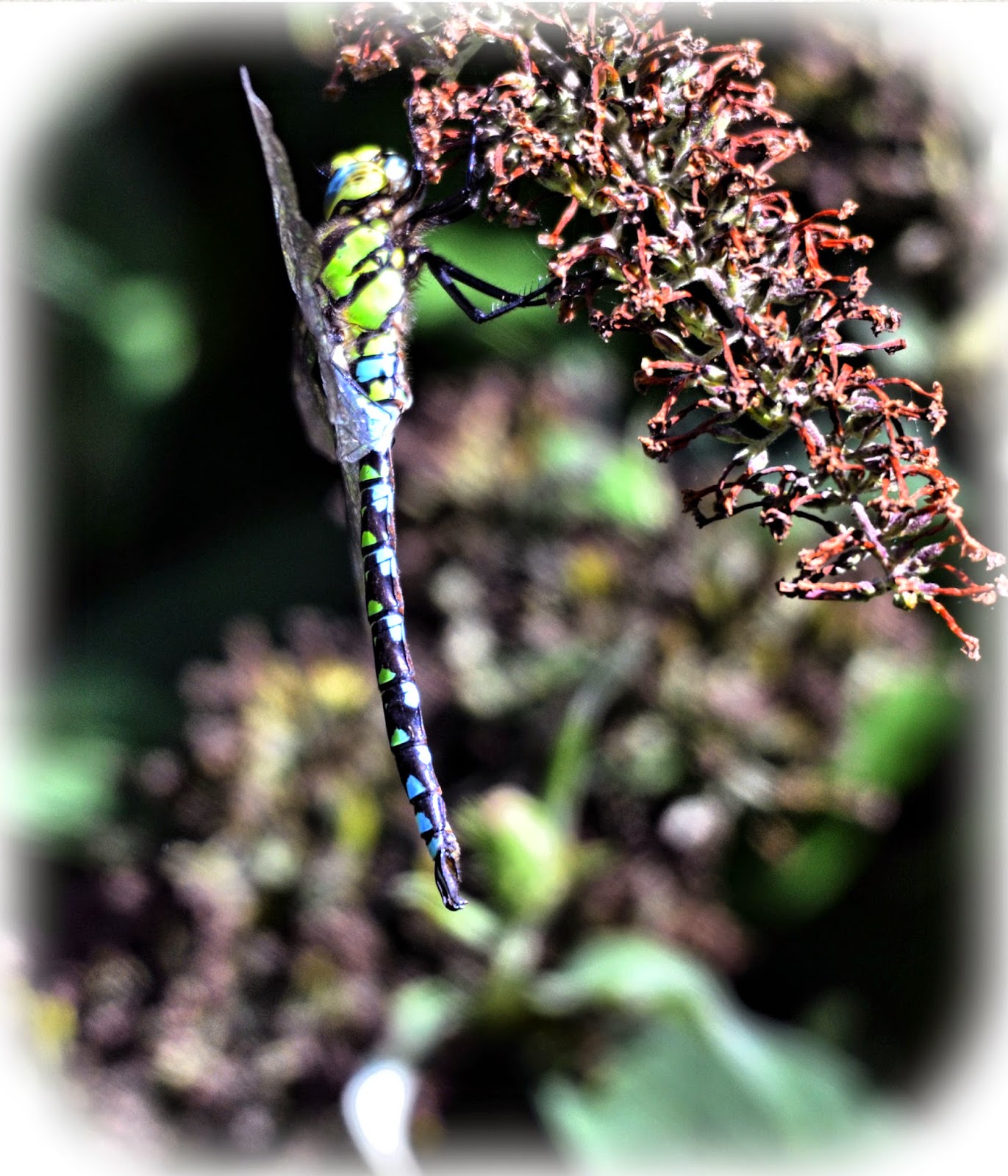 There were quite a few Migrant Hawkers still on view, a Brown Hawker was flying around the inside of the Cordite store area, but once again never settling in view.

Red Admirals were the most numerous Butterfly feeding on the Buddleia blooms, with a few Holly Blue Butterflies flitting around in the undergrowth. 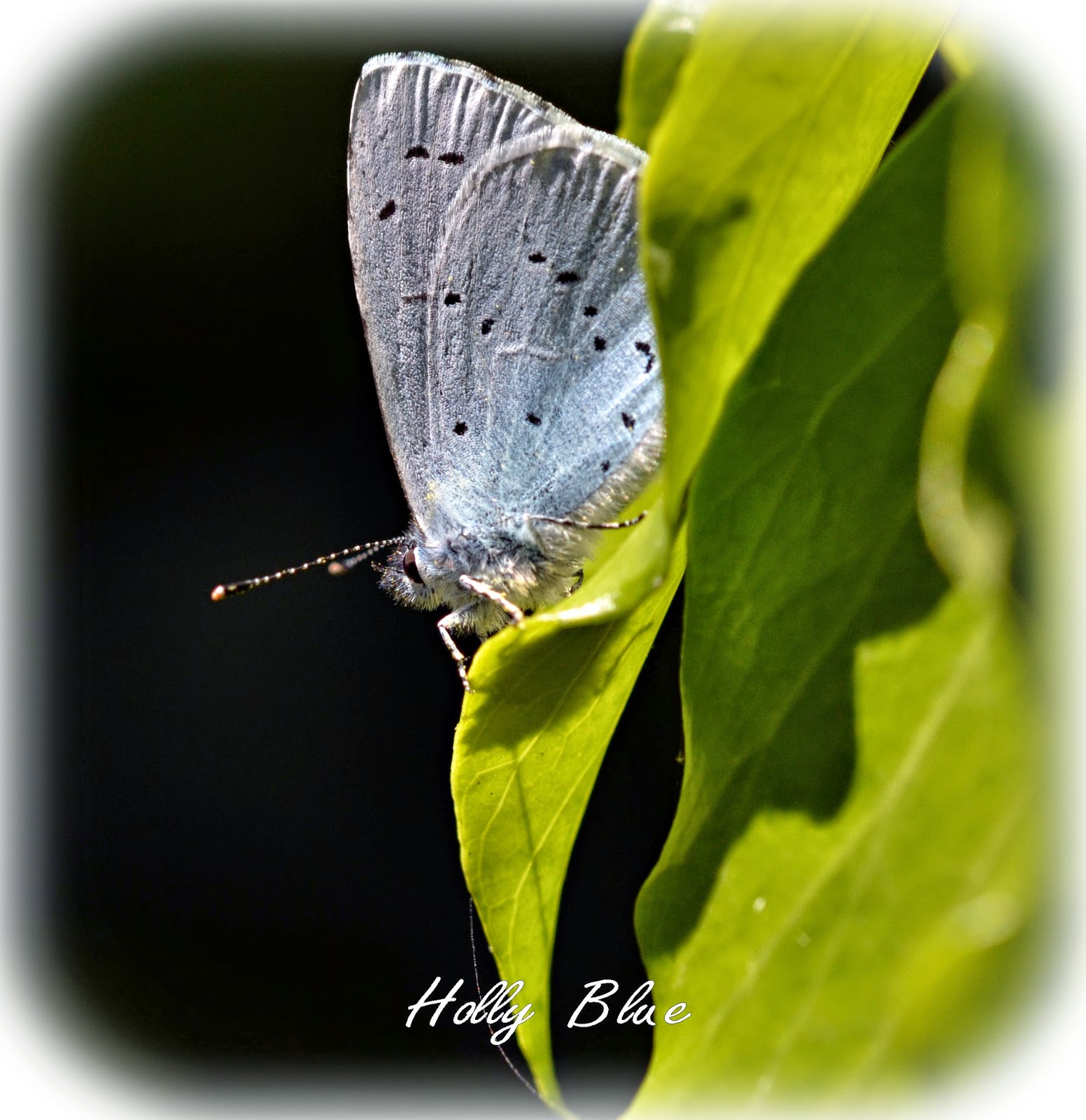 Moving on to the grasslands around the Ken Barrett hide, a number of male Common Blue Butterflies were seen. 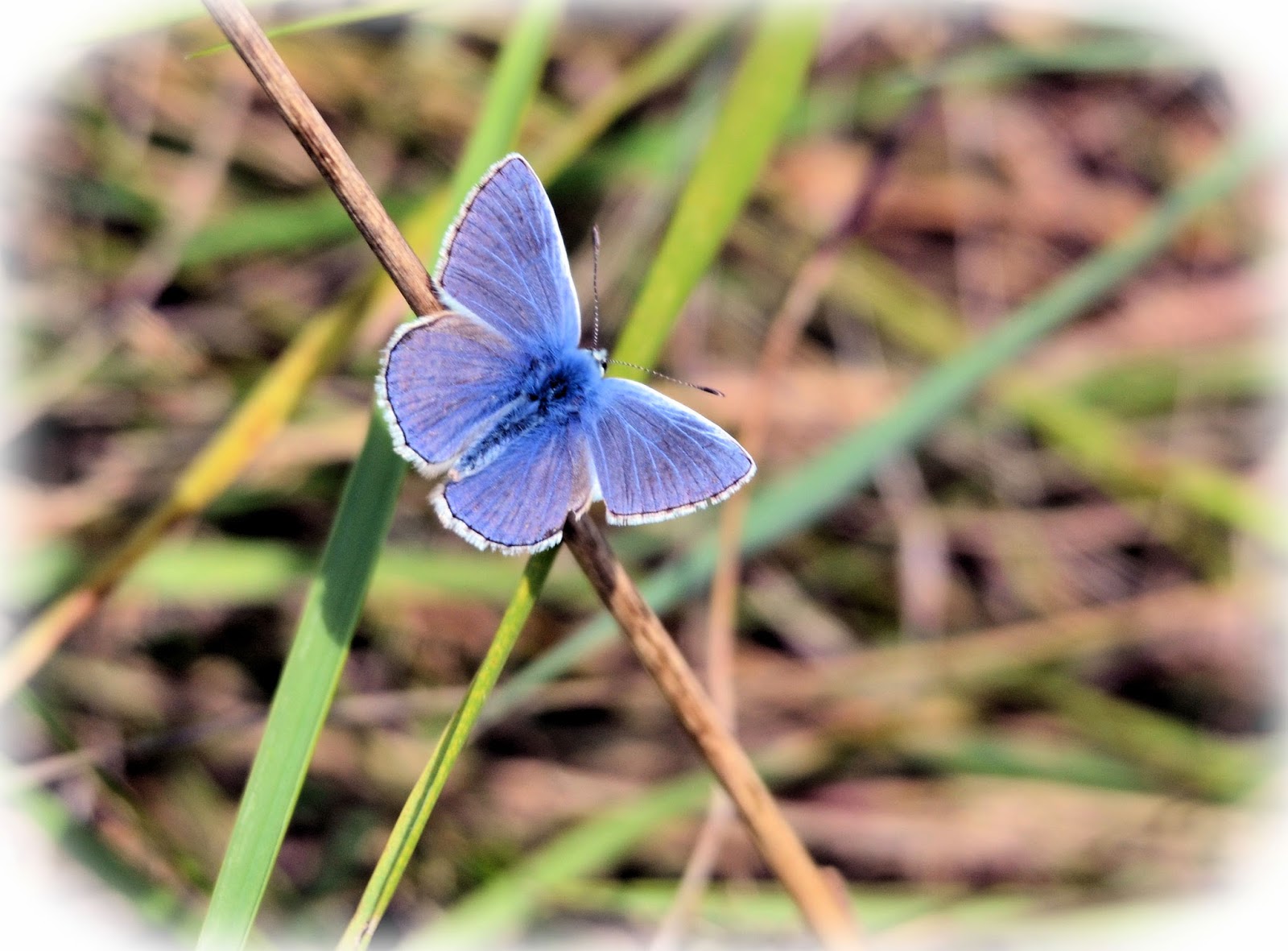 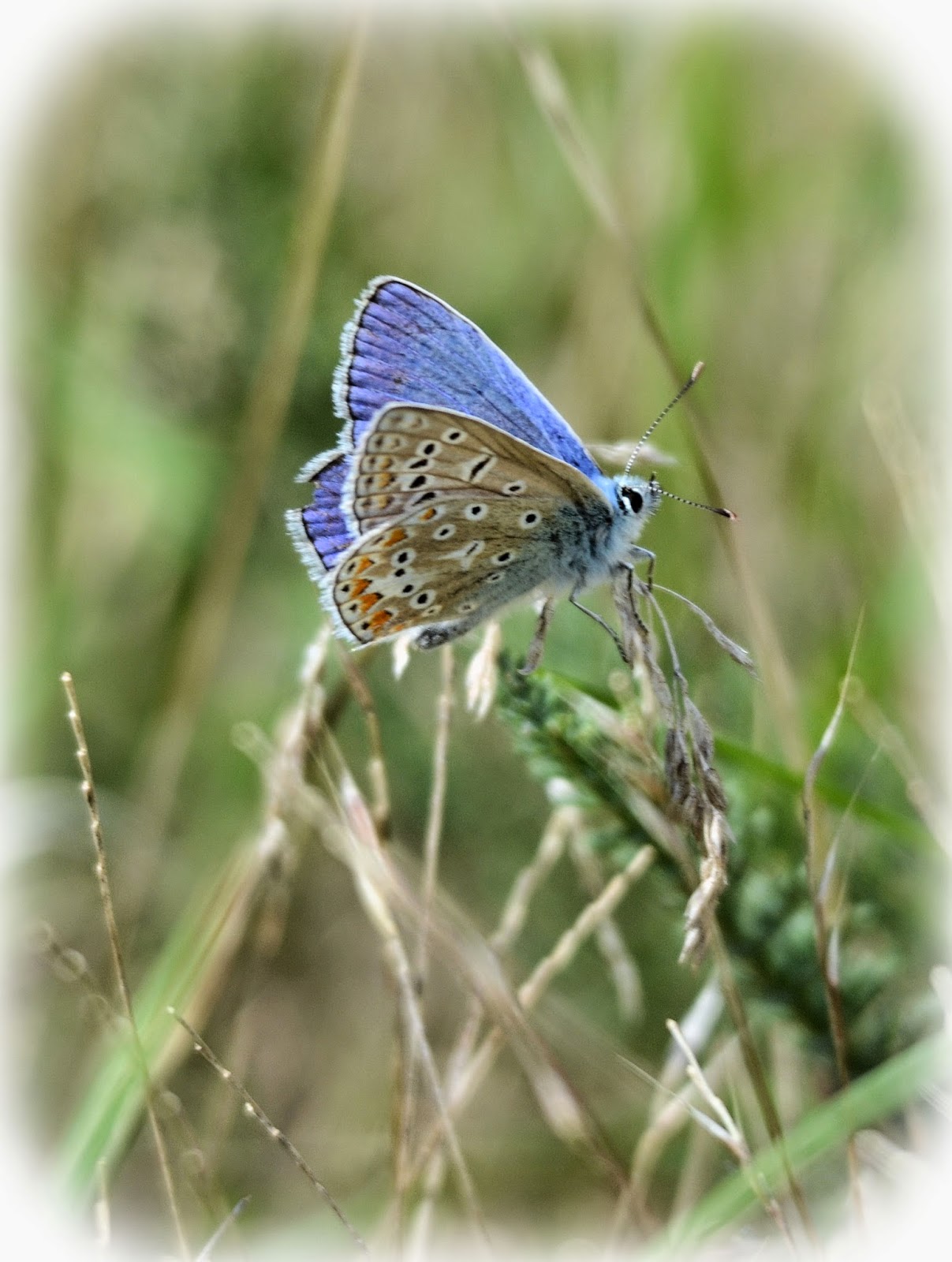 And to complete the theme,
A Common Blue Damselfly resting up in the long grass. 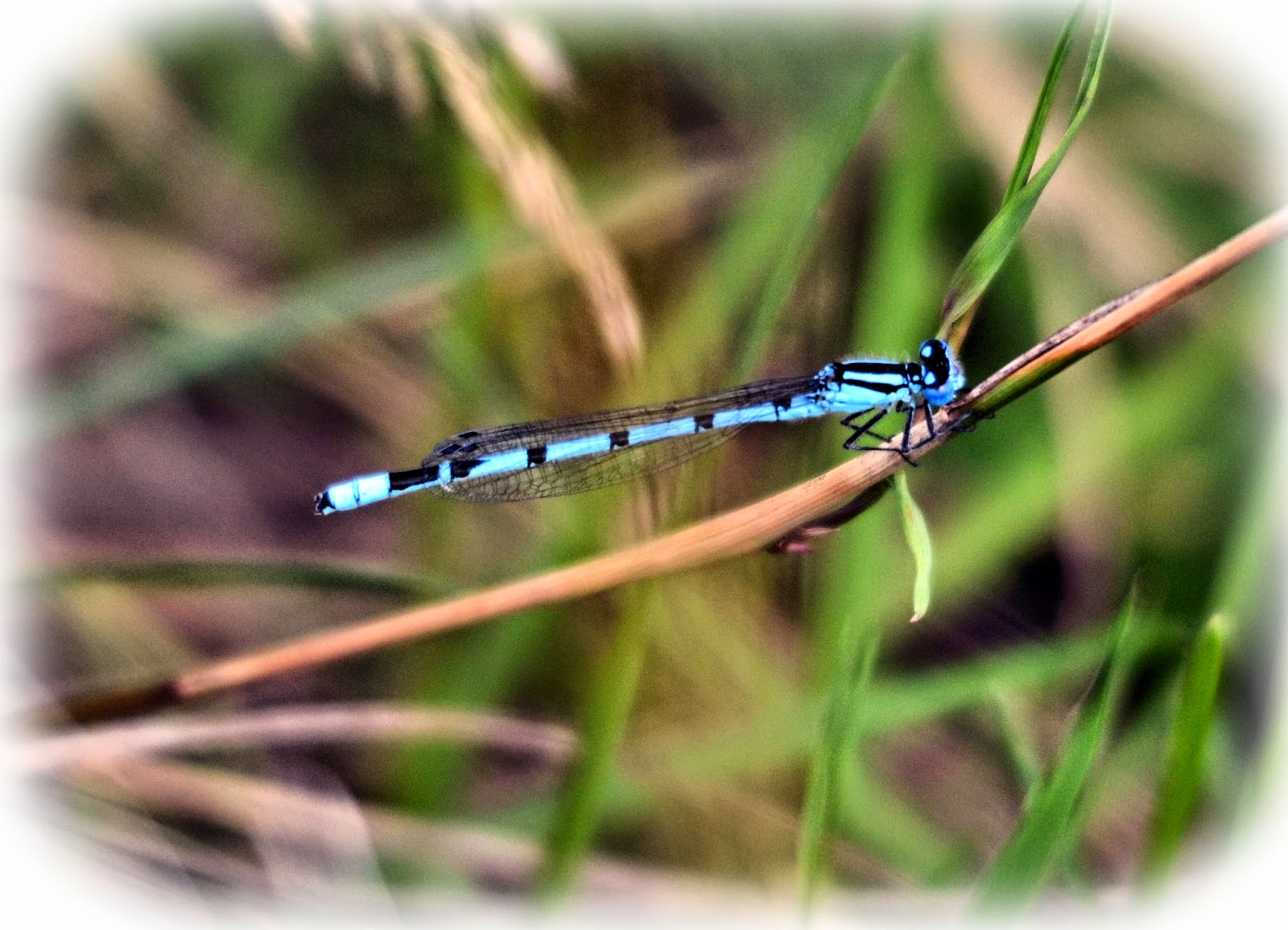 Also noticed another two Wasp Spiders low down in the grass. 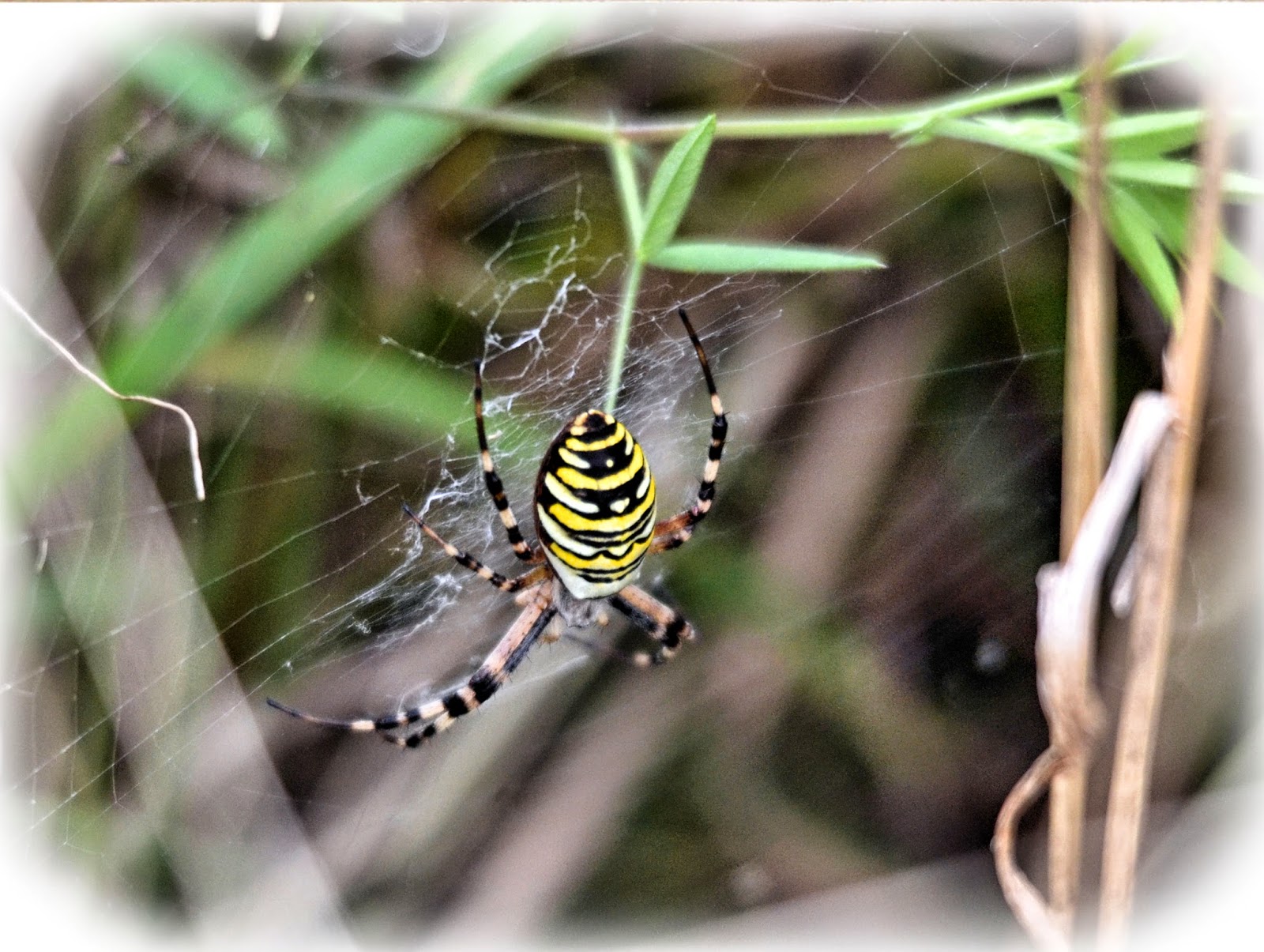 And for that touch of yellow, as I approached the Dragonfly pools
a Clouded Yellow Butterfly caught my eye, this was the only one seen, quite restless, never settling for longer than a few seconds,
always with wings closed. 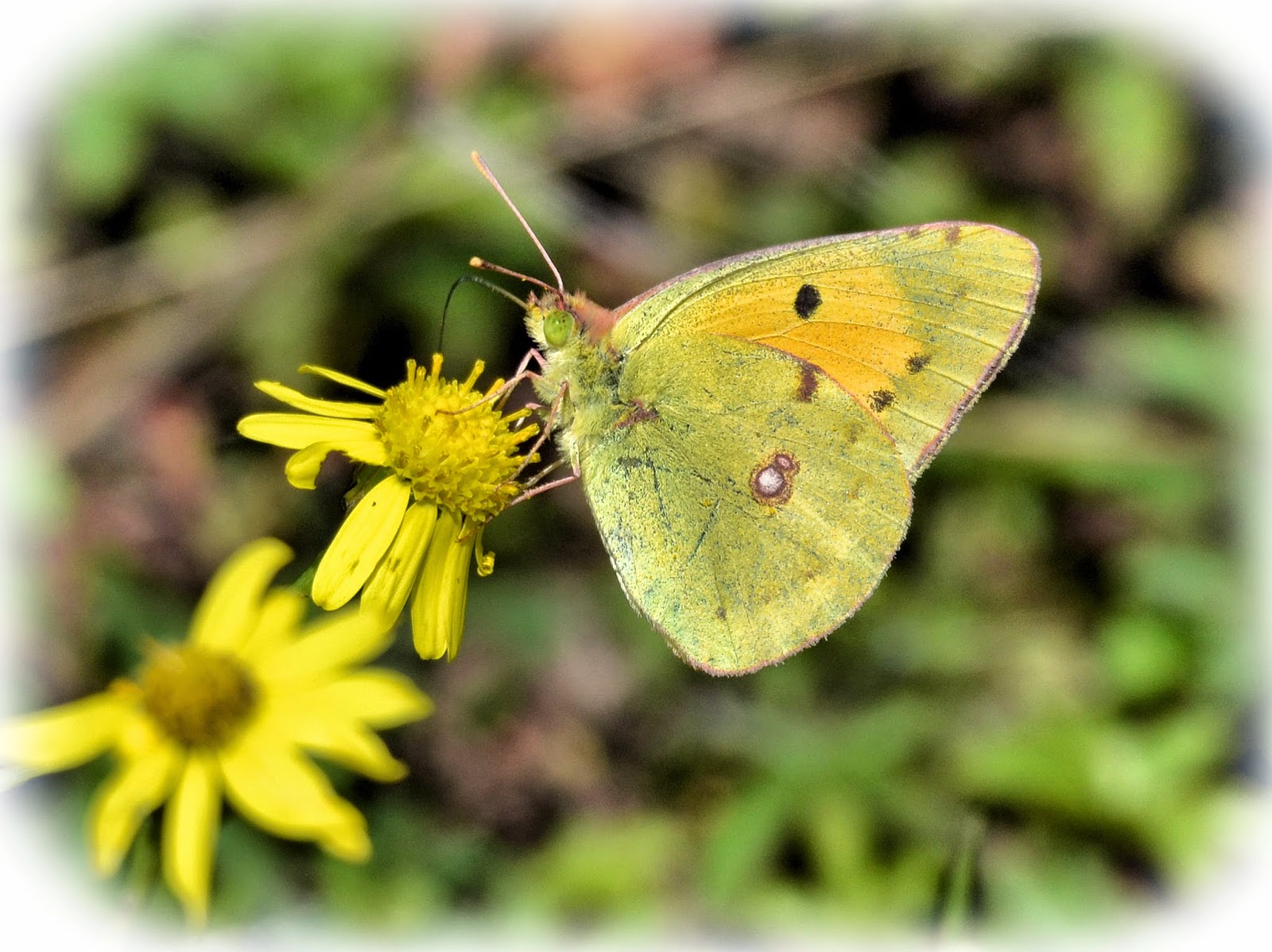 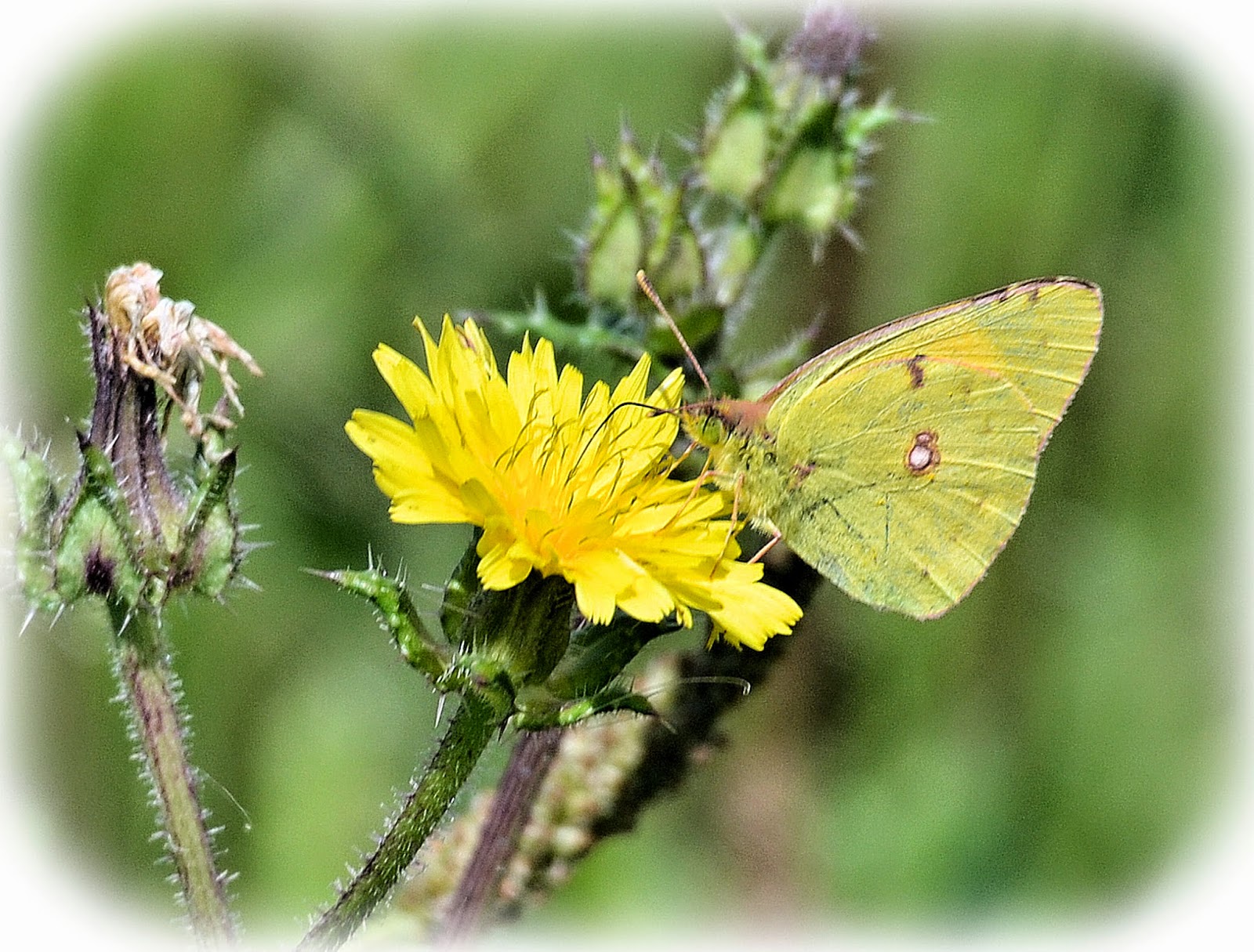 This one looks quite worn, but considering its a migrant, possibly from North Africa or Southern Europe,
it was a welcome sighting.
Posted by Merlin52 at 23:17 No comments:

Following a conversation with a fellow dragonfly watcher several weeks ago,  a Dragonfly Sanctuary in Lea valley had been mentioned, so with a couple of spare hours, my wife and I decided on a visit to check it out.

The Sanctuary known as Cornmill Meadows lies in the heart of the Lea Valley complex, and has been designated a Site of Special Scientific Interest.

It proudly boasts that over half  the UK species of dragonfly have been recorded here.

There is a large free car park, with plenty of signboards that lead you to a way marked trail around the site.
It consists of an area of seasonally flooded grassland, ponds,ditches, streams and woodland.

We enjoyed a pleasant walk around the trail in warm sunshine, noting the following
Common Blue Damselfly, Banded Demoiselle, Common Darter, Ruddy Darter, Brown Hawker, Migrant Hawker and Emperor dragonfly.
I was hoping to see some Emerald damselfly or maybe the White legged Damselfly, but not this time. 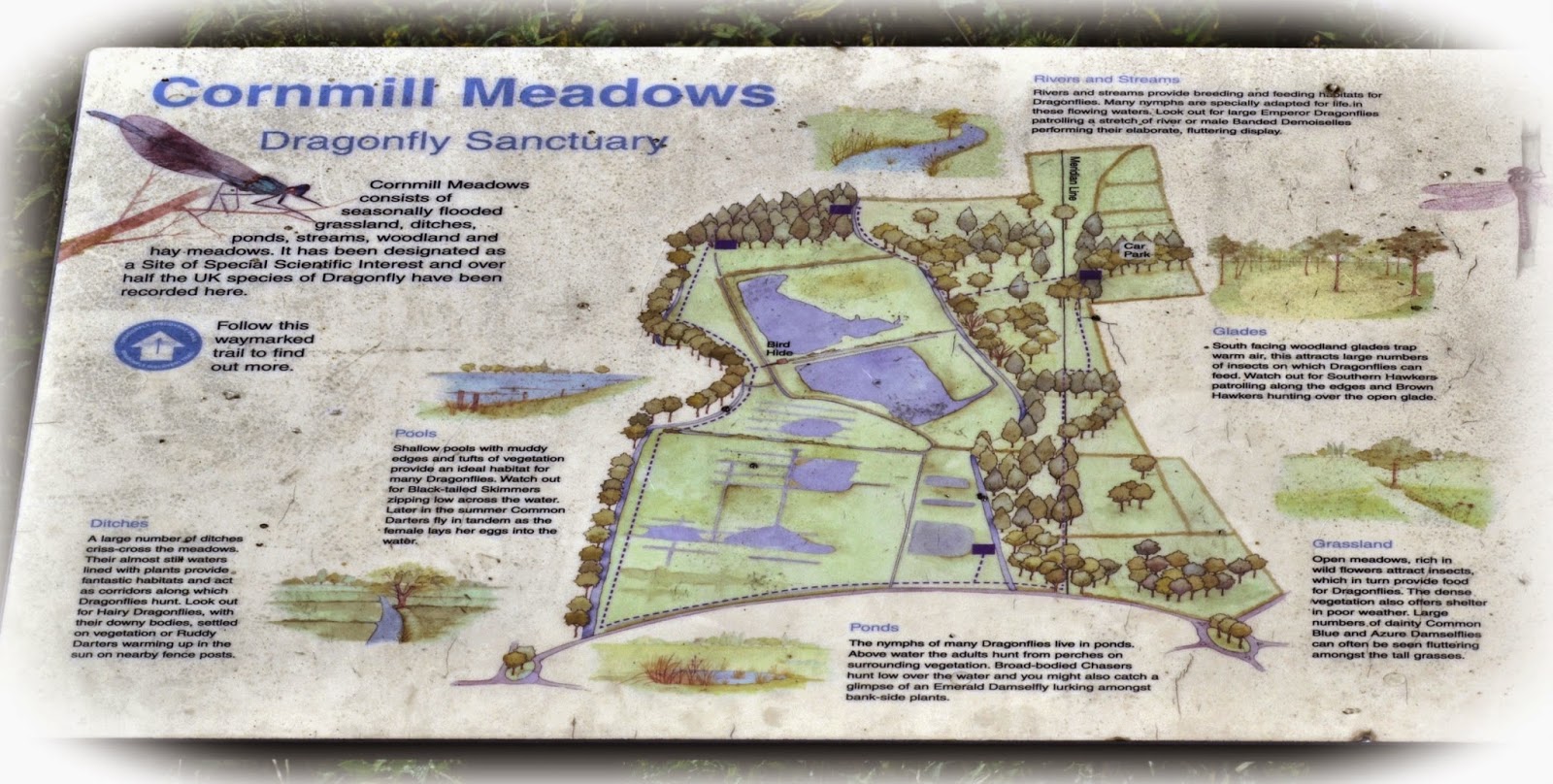 Finally managed to get a photograph of the Common Darter which has been eluding me this year. 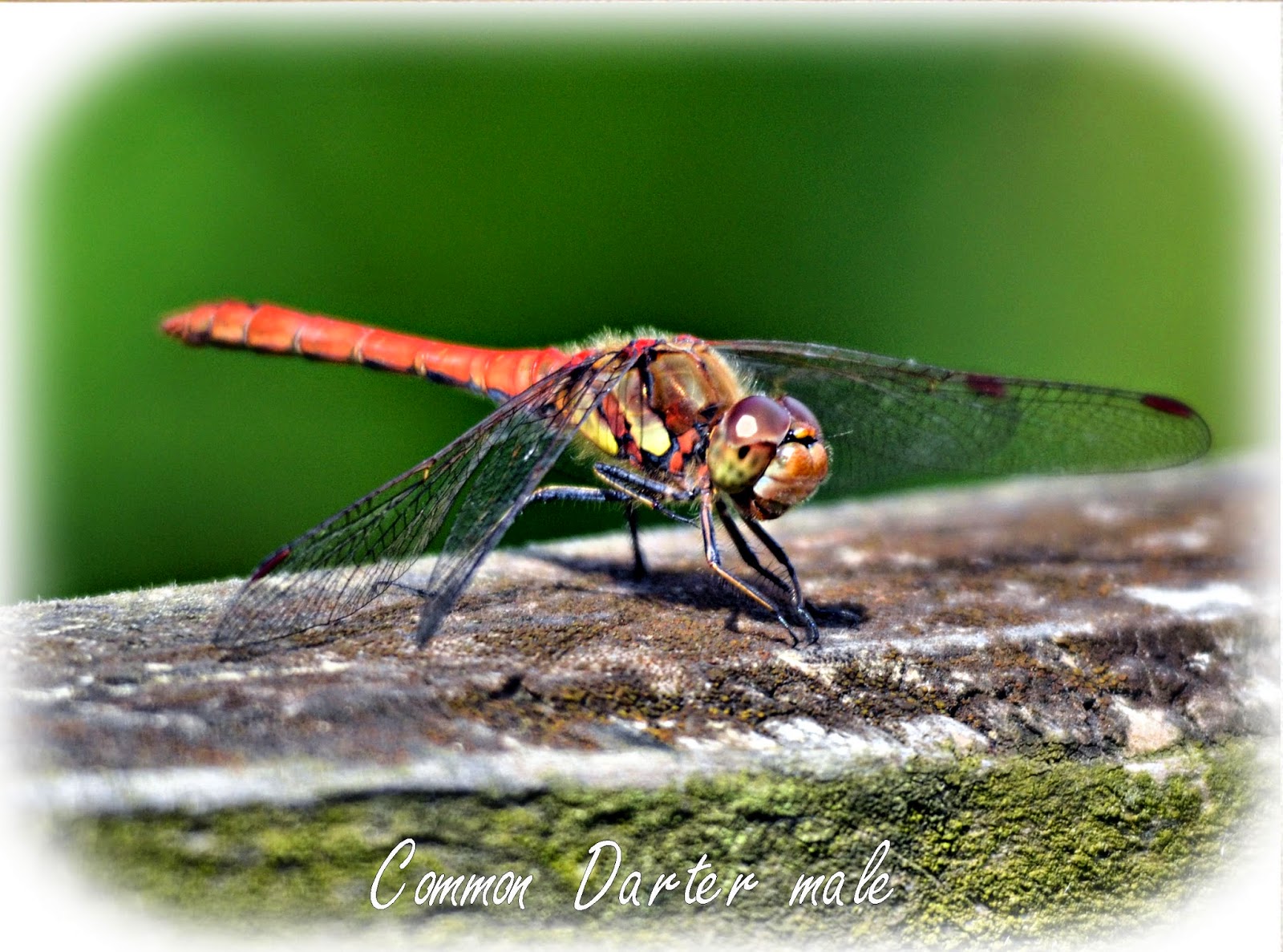 Lots of Ruddy Darters around the streams and bankside vegetation. 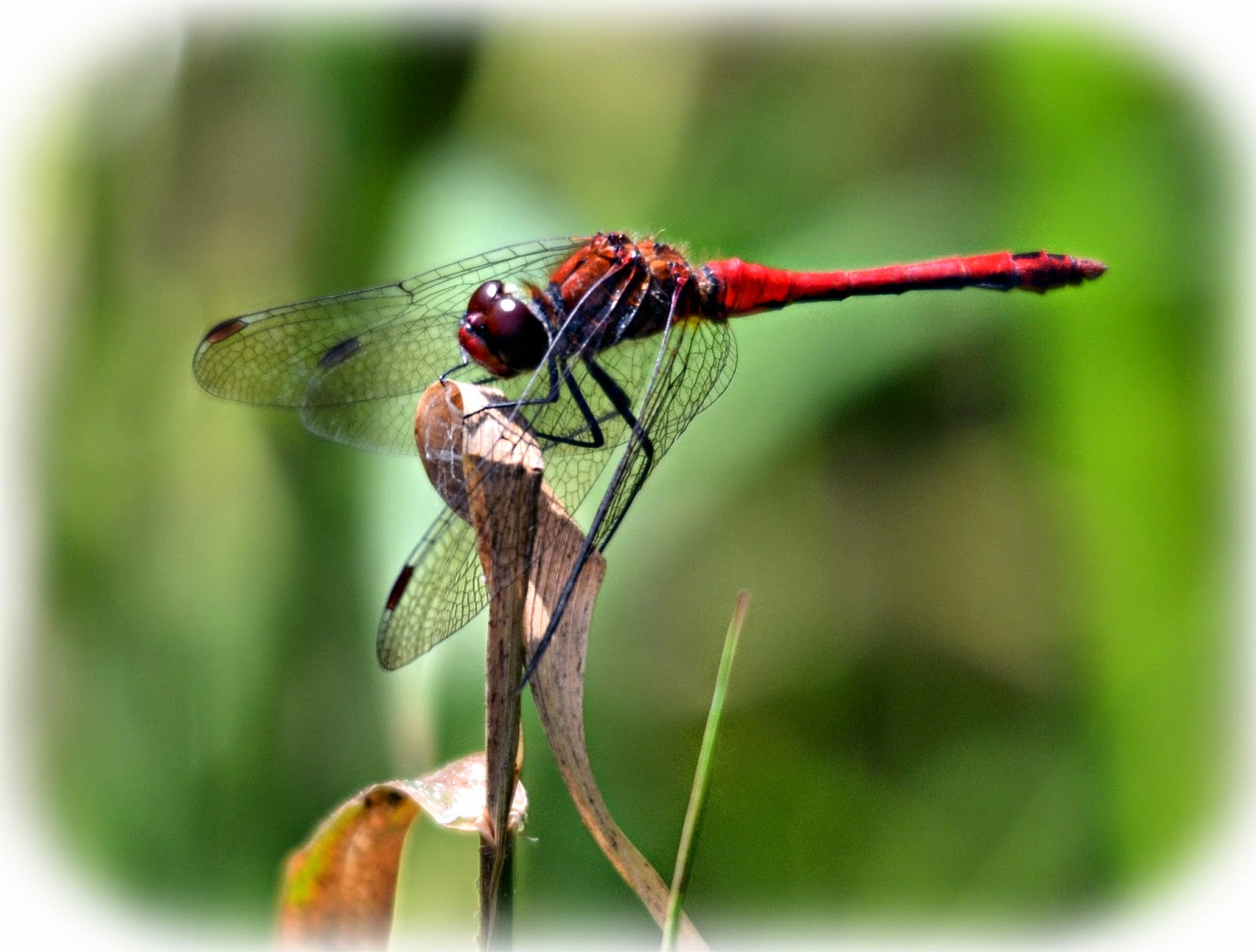 Quite a few Migrant Hawkers hanging about in the willows along the streamside. 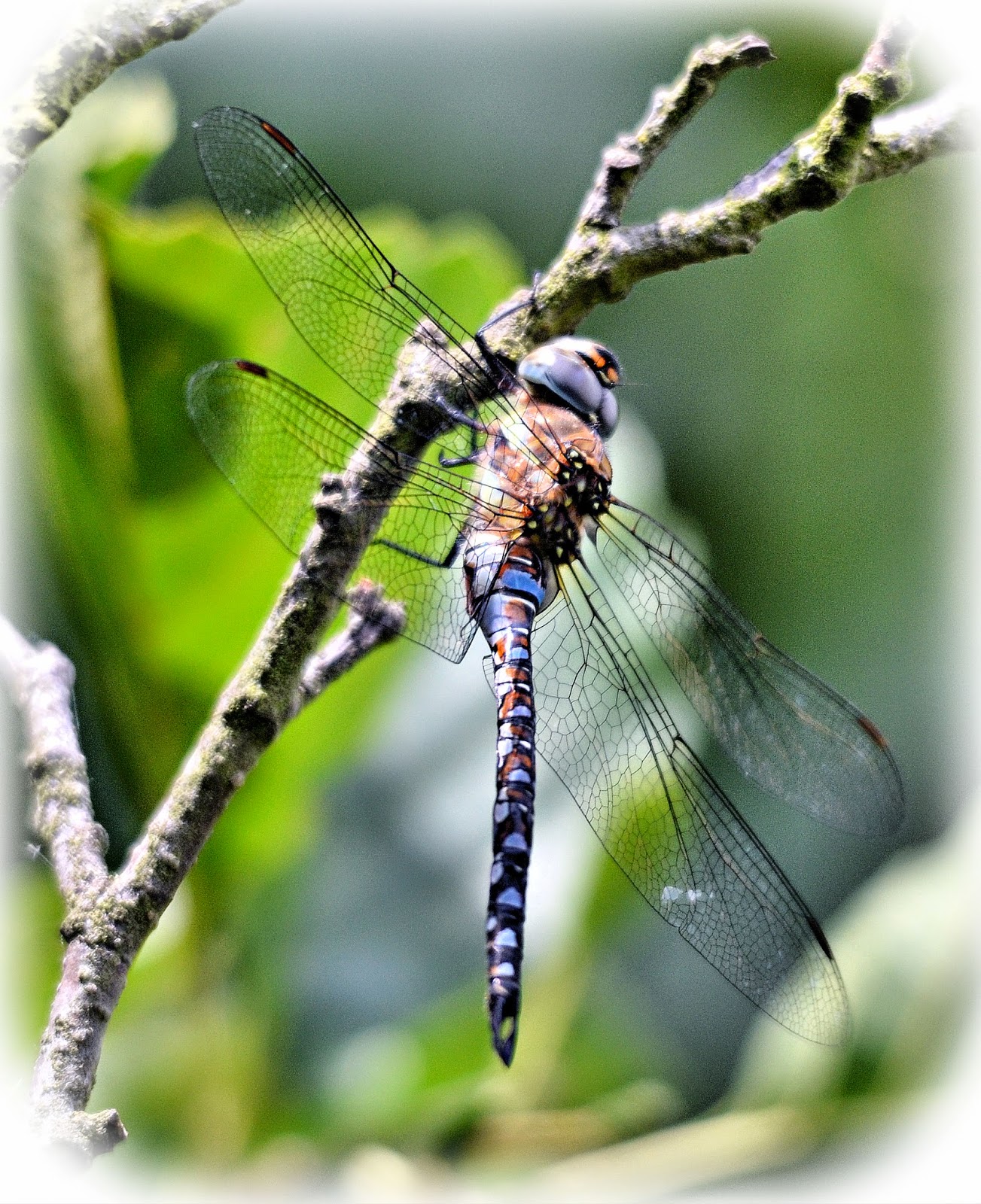 Still one of my Favorites , the male Banded demoiselle. 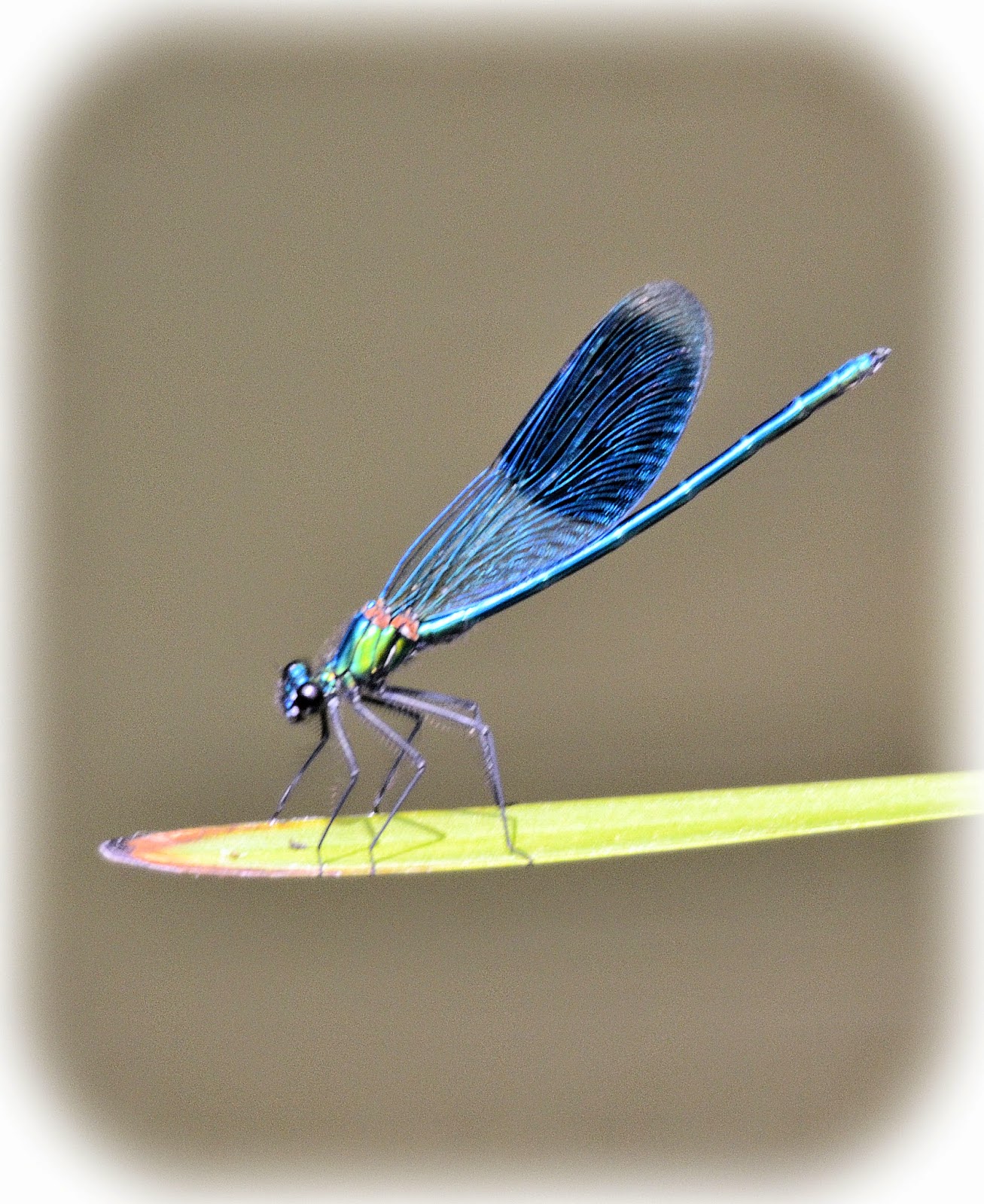 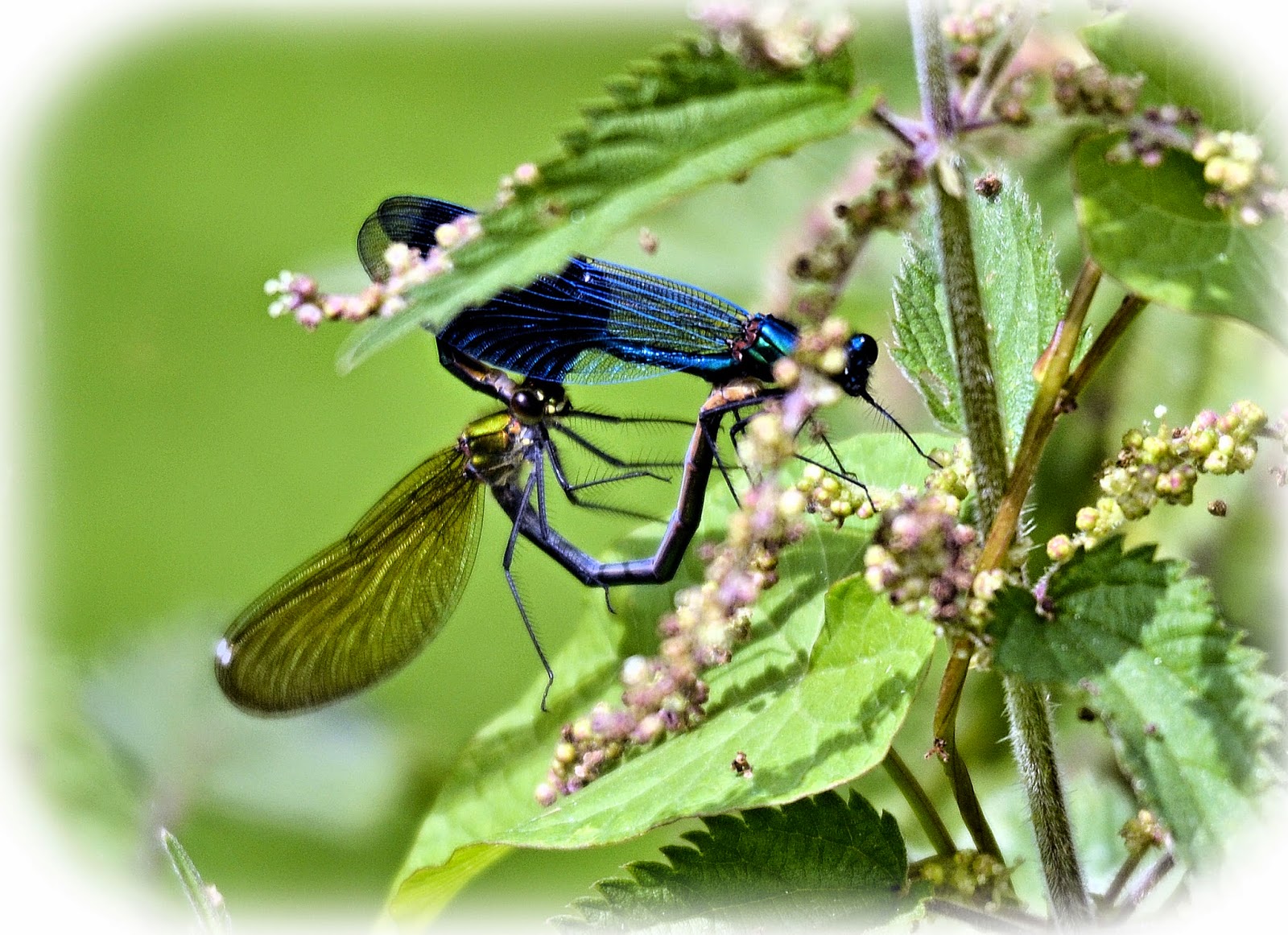 A very pleasant walk, if you are passing this way with a few hours to spare.


The Wasp Spider first recorded back in 1922 at Rye, has now colonised many suitable habitats throughout the south of the country, the webs are constructed low down in rough long grasses.
where it preys upon grasshoppers and other insects.

Rainham RSPB is becoming a stronghold of this striking Mediterranean spider, with well over a hundred individual webs found this year so far.


And as we approach August / September , the so called spider season, when the female spiders are at their largest, when the males must try and mate, usually to their peril. 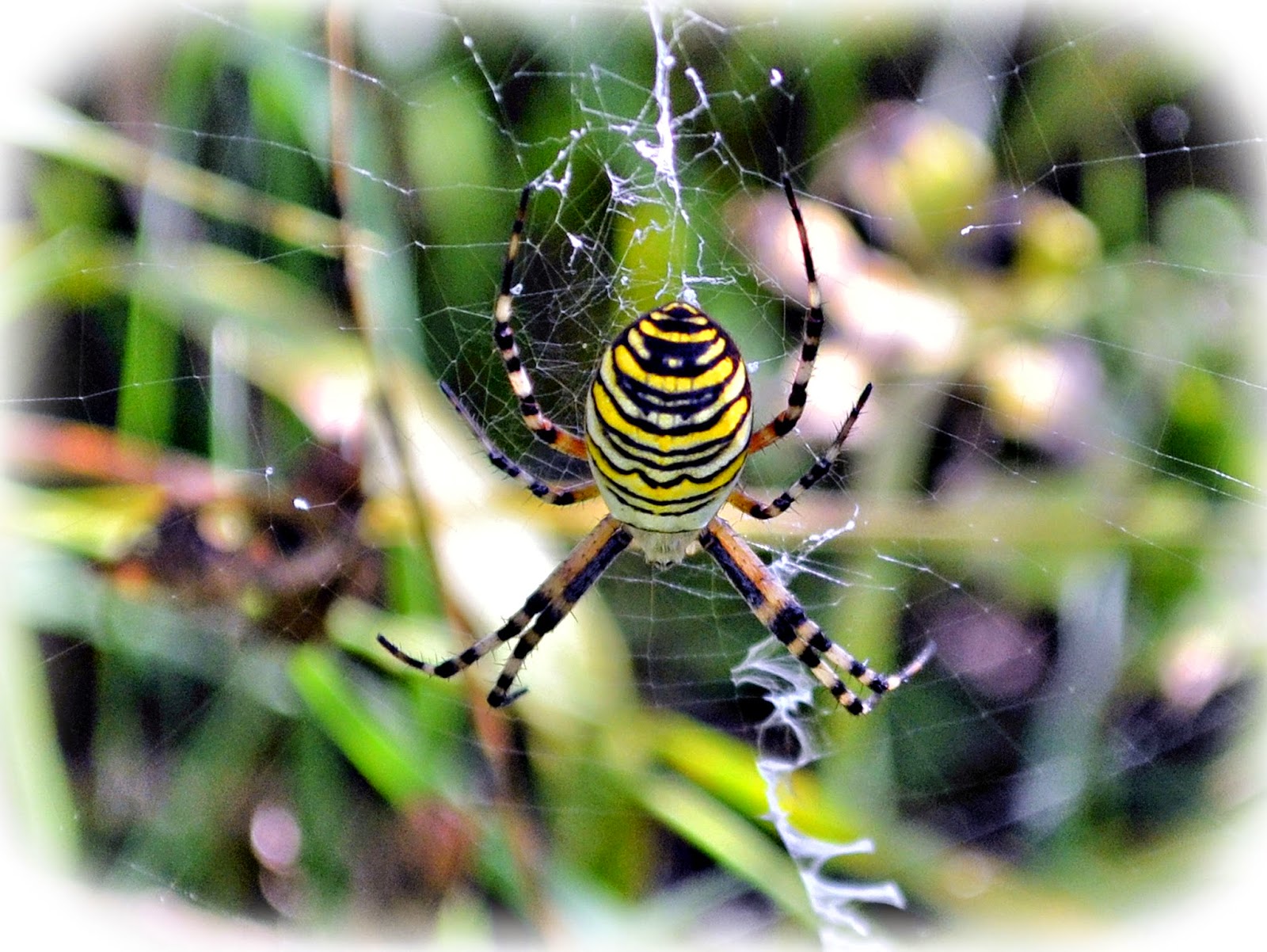 There webs can be identified by the strange 'stabilimentum' built into the web, a strange zig zag strand of sticky silk running vertically down the centre of the web.

You can just make out the 'stabilimentum in this typical view of a wasp spider's web, interestingly, if you look closely at the top of the Stabilimentum you can also make out the form of the much smaller male spider lurking in the background, I didn't notice that at the time. 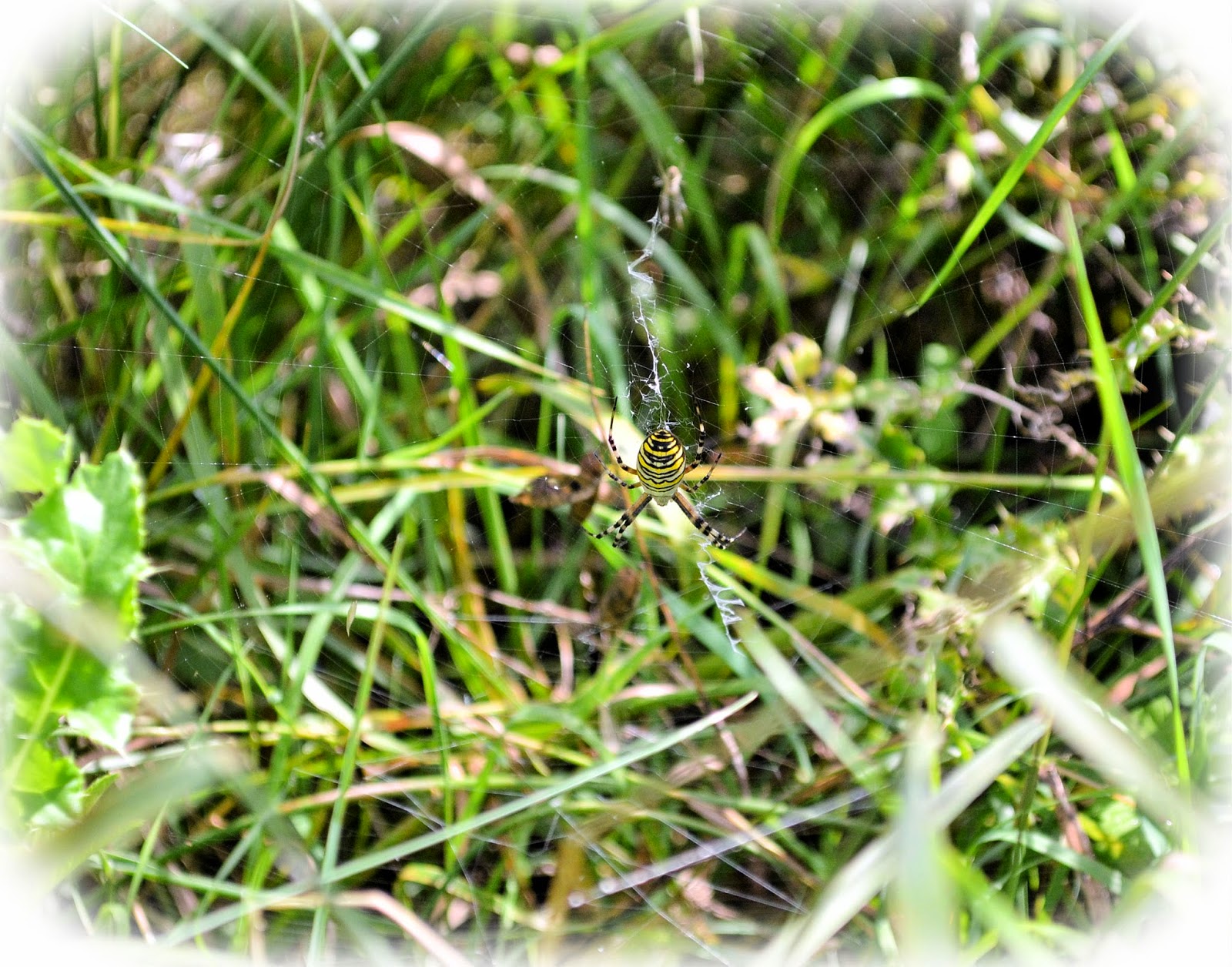 No one is really sure what the purpose of this 'stabilimentum is, a few theories have been put forward,
the stabilimentum is meant to reflect ultraviolet light and so attract prey into the web, another theory is that if danger approaches the web, the spider vibrates the web causing the stabilimentum to shake and thus scare away potential dangers, seems unlikely.

While I was watching this particular spider, I think I must have disturbed a grasshopper which landed directly into the web. 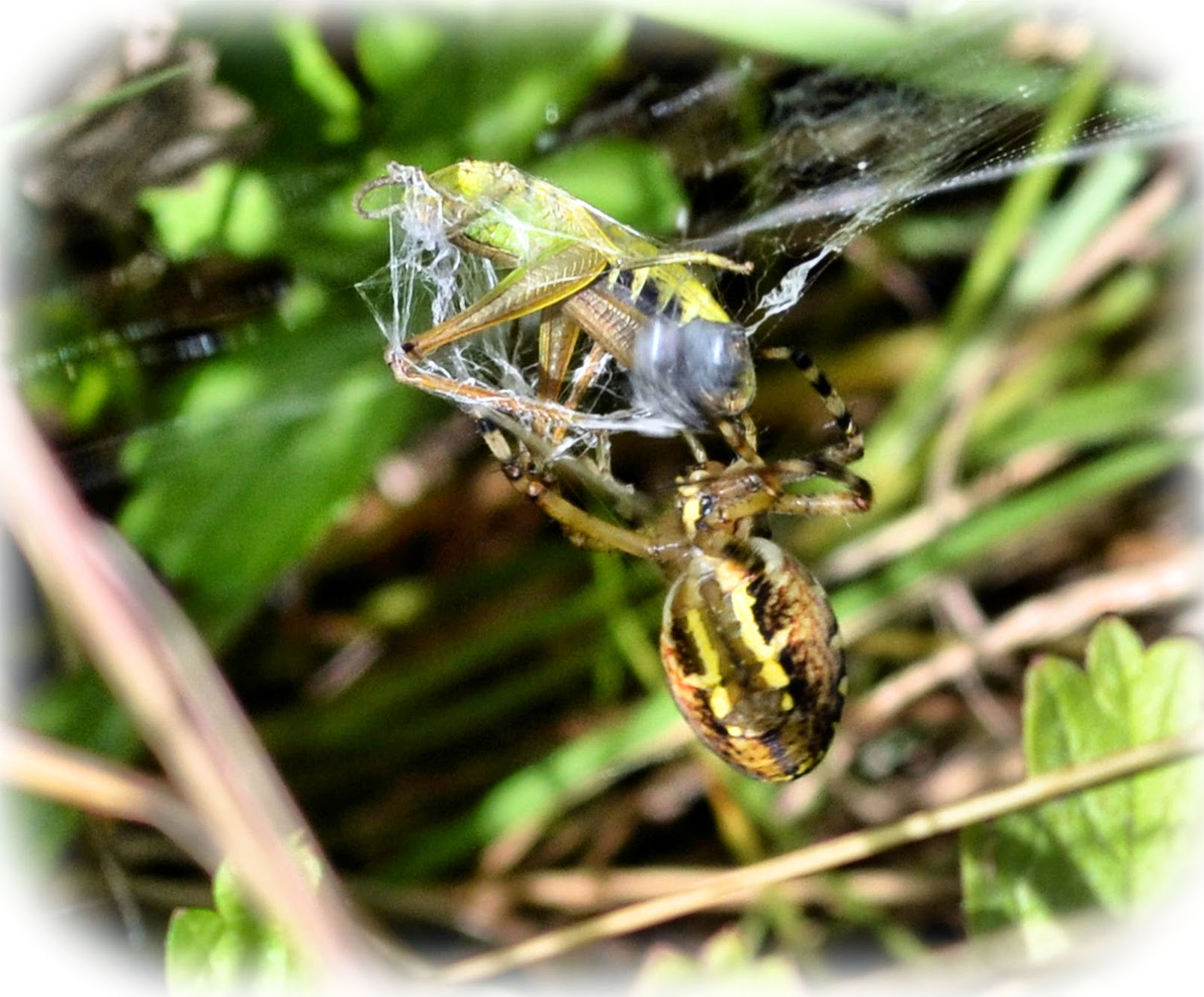 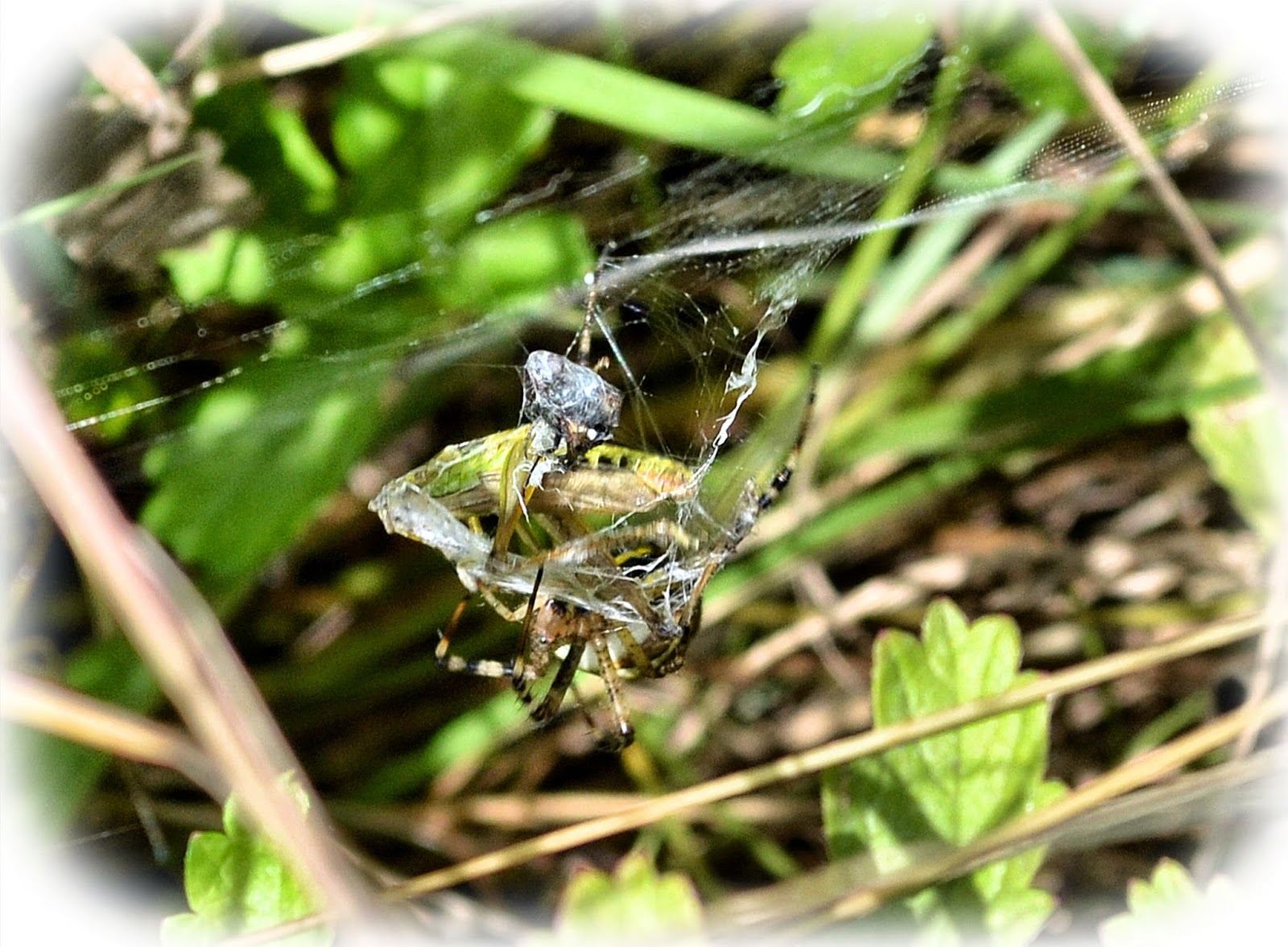 The spider had the grasshopper disabled within seconds, it then withdrew, presumably to await the deadly venom with its protein dissolving enzymes to do its work. 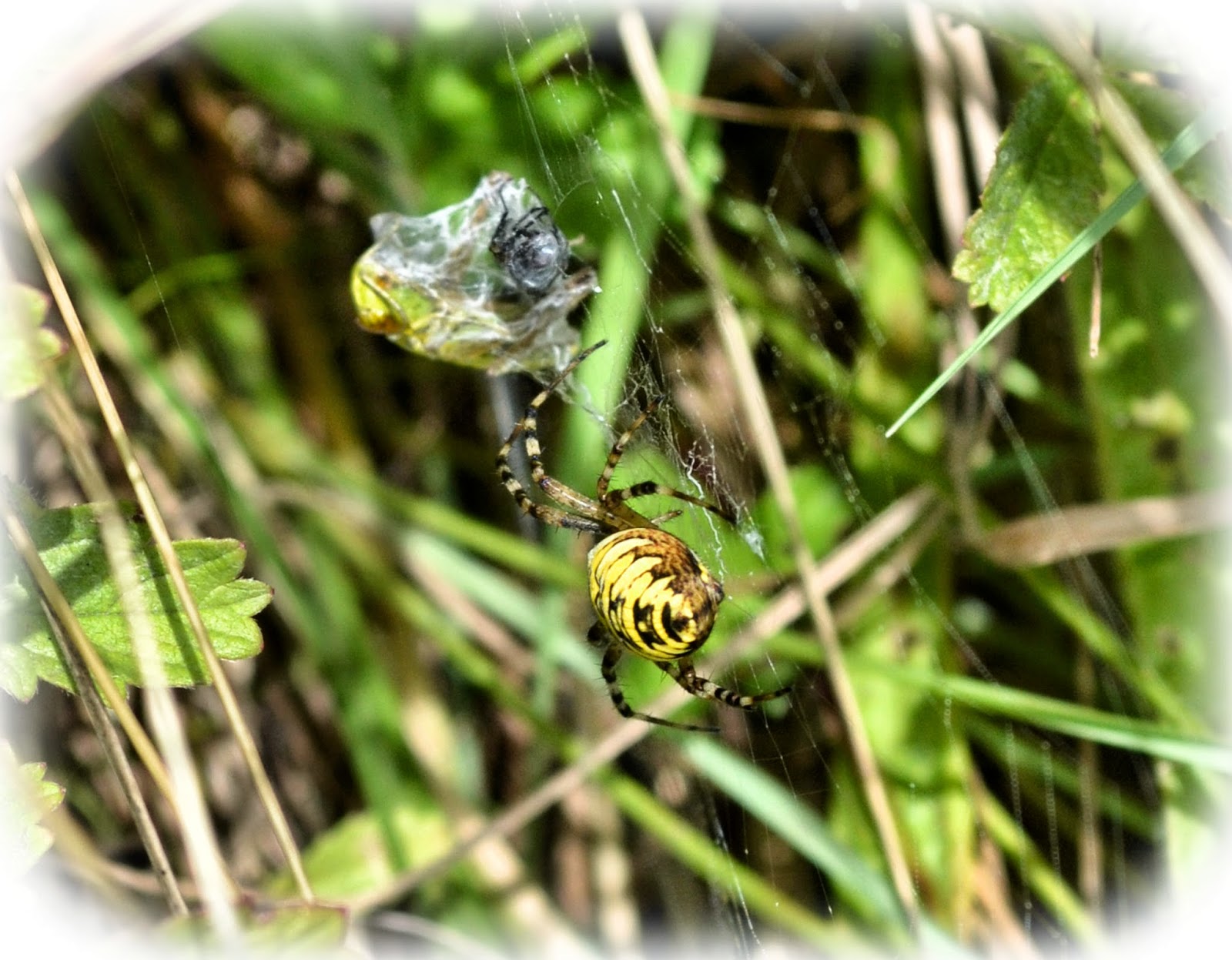 It would be interesting to observe this spider with other insect catches, I'm sure that this was just coincidence it seems to obvious to have been overlooked by those that study these creatures in detail.

Interesting to watch though.

There's a beautiful Buddleia outside the Cordite Store at Rainham RSPB, also known as the Butterfly bush, its flowers provide an important nectar source for many species of butterfly and other nectar loving insects.

These Buddleia are always worth checking out, two weeks ago, it was alive with Peacock, Red Admiral and  many  other types of butterflies and bees.

Sadly, today the blooms have now faded and  turning to seed.

As I scanned around the tree, there were no Butterflies to be seen, but there was several large Dragonflies  flying around the Buddleia and surrounding bushes at a high level, a Brown Hawker with its distinctive golden washed wings was seen, a dragonfly I would love to photograph but notoriously hard, as they never seem to settle.

A Migrant Hawker, a male, flew into view and seemed very interested in the faded Buddleia blooms, and as luck would have it settled several times within camera range.

This Hawker seems quite common now in the south of the country, with good numbers seen all around the reserve at Rainham. 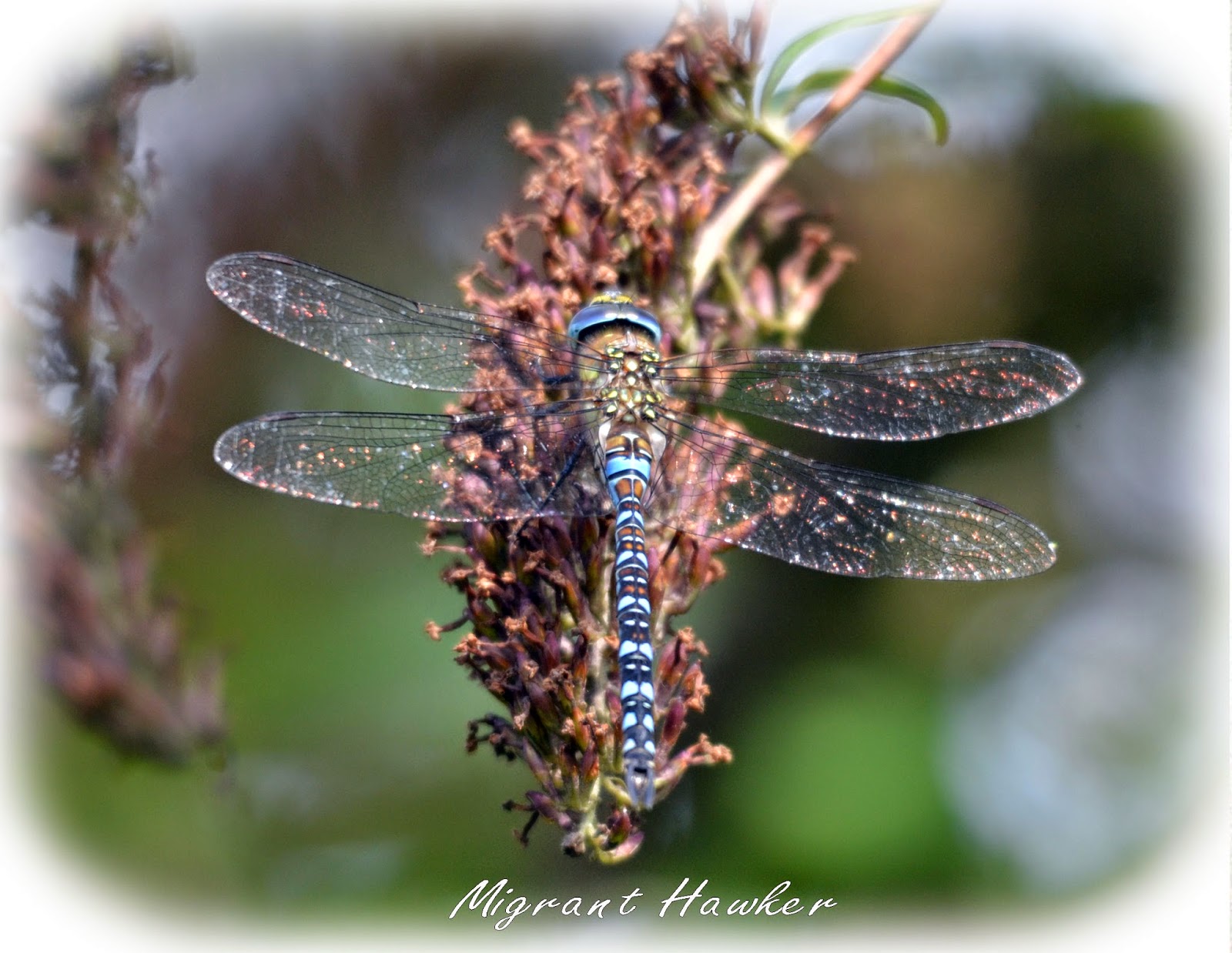 After only thirty seconds or more it was off, I know that dragonflies often return to previous perches so I waited in the hope that it would return, and provide further photo opportunities.

Another Hawker appeared, again interested in the Buddleia blooms, my first thought was that the Migrant Hawker had returned as I had hoped, but this Hawker looked different, large Blue eyes were distinctive, but the all blue abdomen was different, there were no brown or yellow markings, my first thought was maybe a Southern Hawker, I had left my glasses at home, so it was a matter of checking the field guide on my return to home.

On looking through the guide, there it was, a Southern Migrant Hawker sometimes known as a Blue-eyed Hawker, and quite scarce. Used to be a rare vagrant from mainland Europe, but now occurring at a few sites in Kent and Essex.

The field guide described it as a relatively small hawker, but my impression was of it being slightly longer in the abdomen than the Migrant hawker. 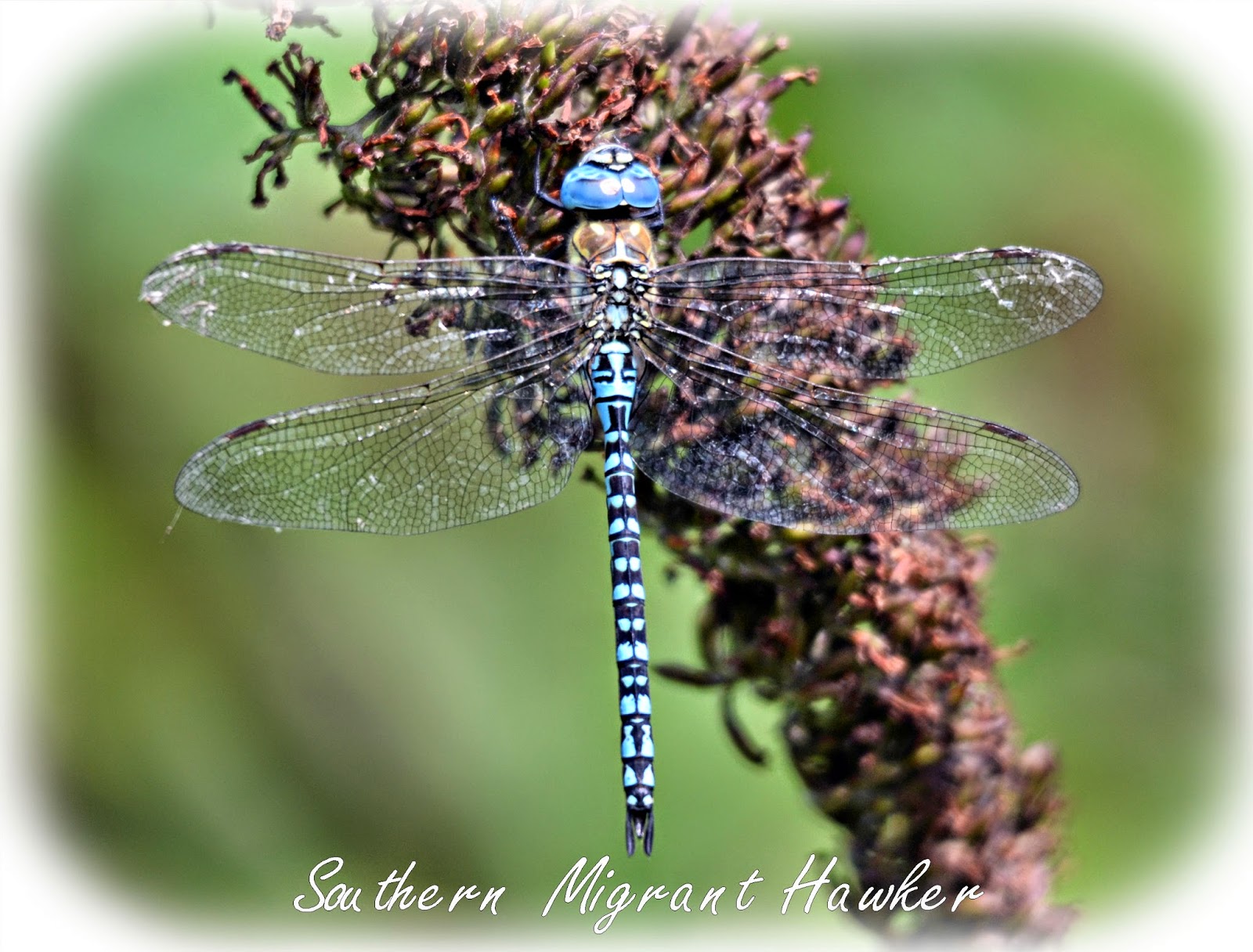 Another new Dragonfly for me, and on checking the Rainham RSPB blog site another visitor had also seen the Blue eyed Hawker in front of the Ken Barrett hide, later in the afternoon,
not far from where I had seen the Hawker, so confirmed.

Other dragonflies noted were Emperors, Brown Hawkers, Black tailed Skimmers. A number of female Emperors were seen ovipositing as shown below. 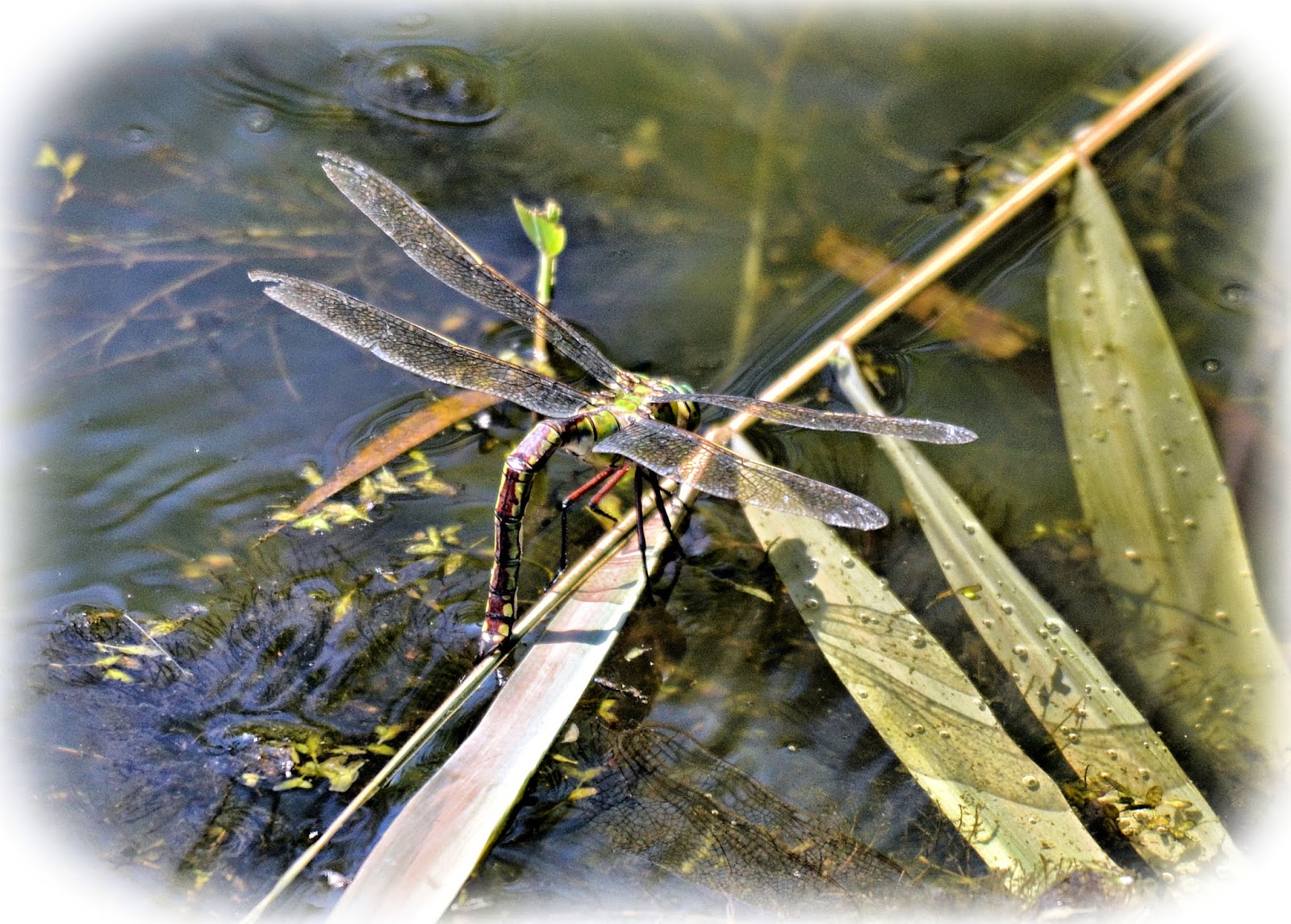 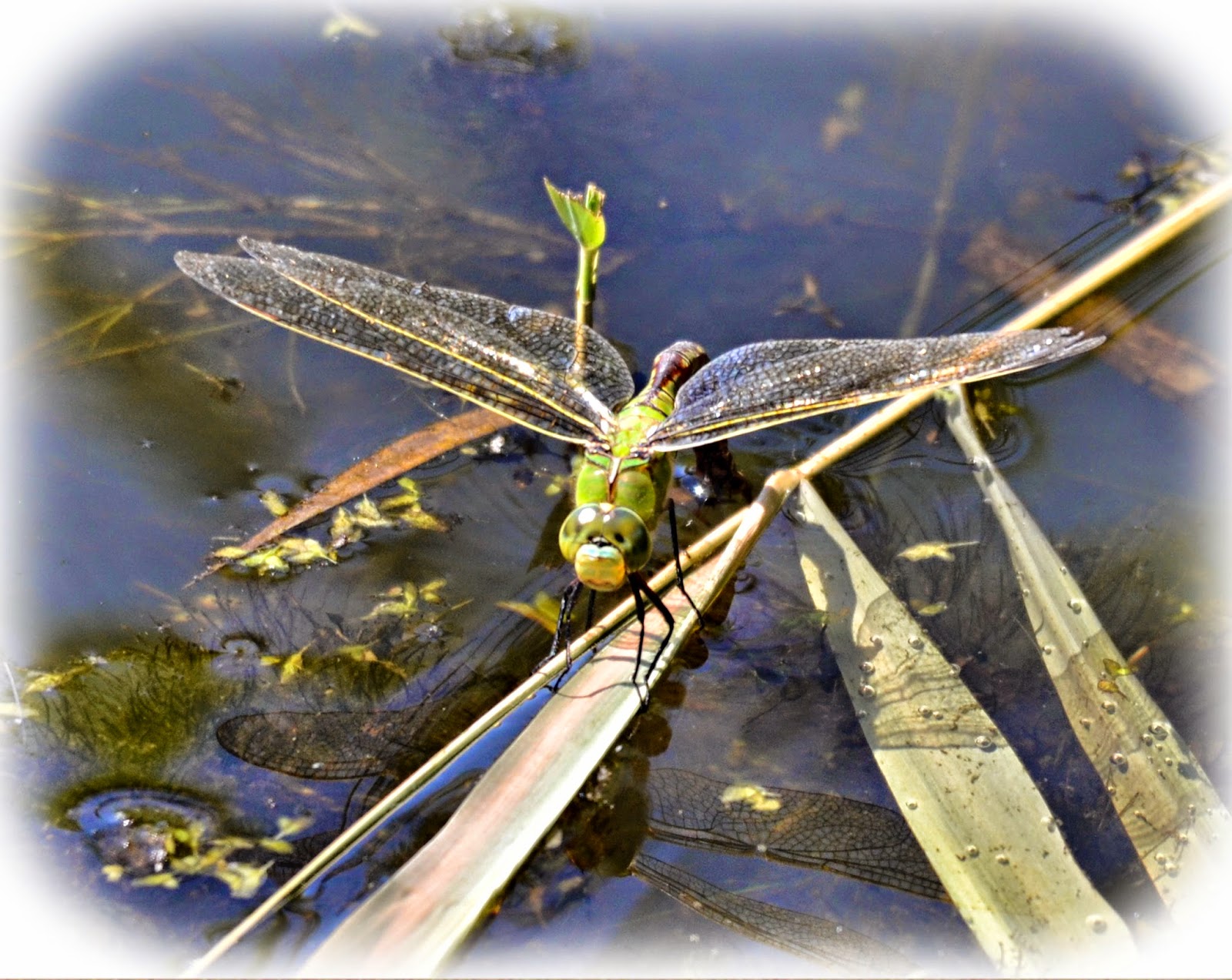 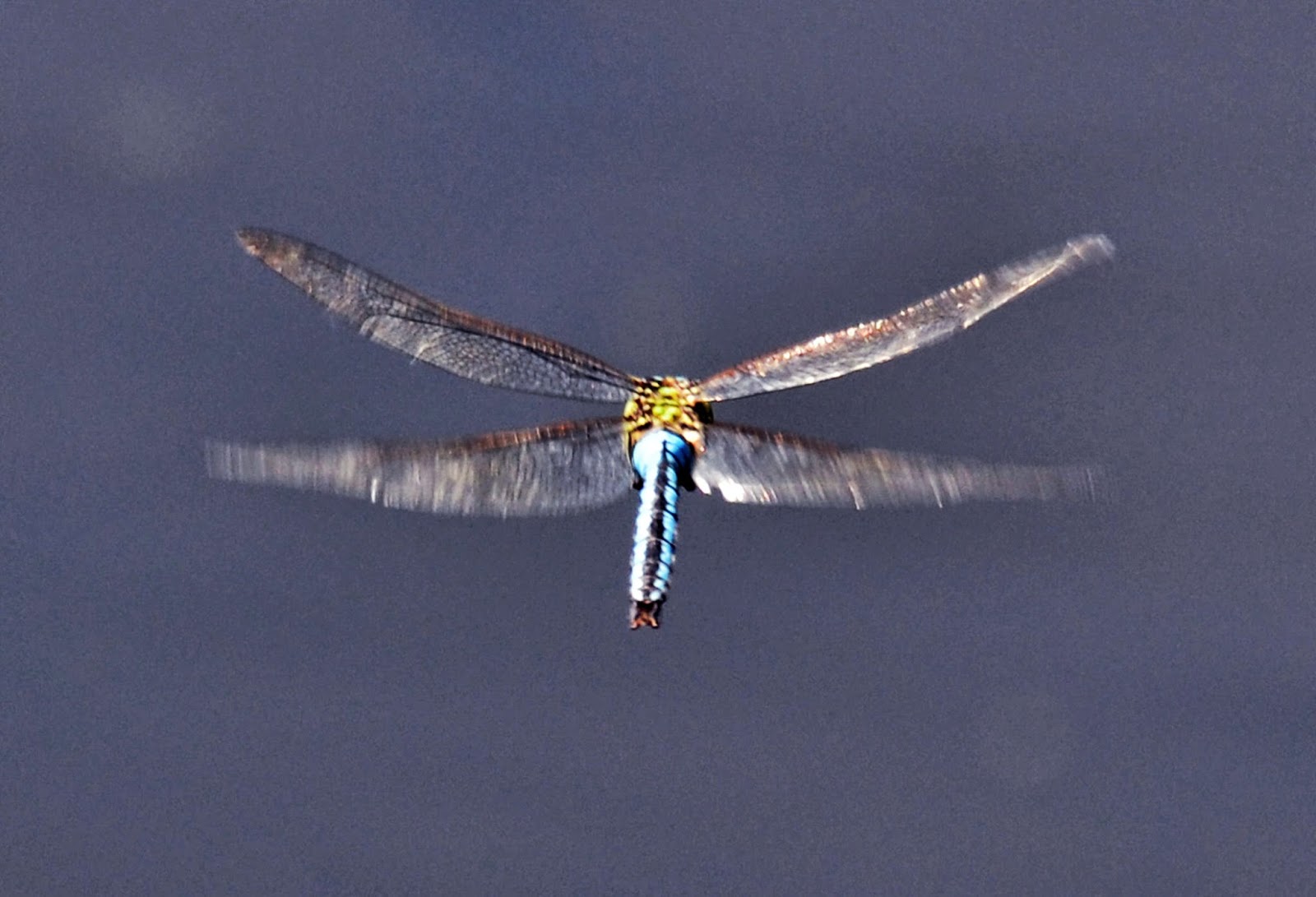 Darters were once again represented by  the Ruddy Darter, which seem to be more common than the "Common Darter " 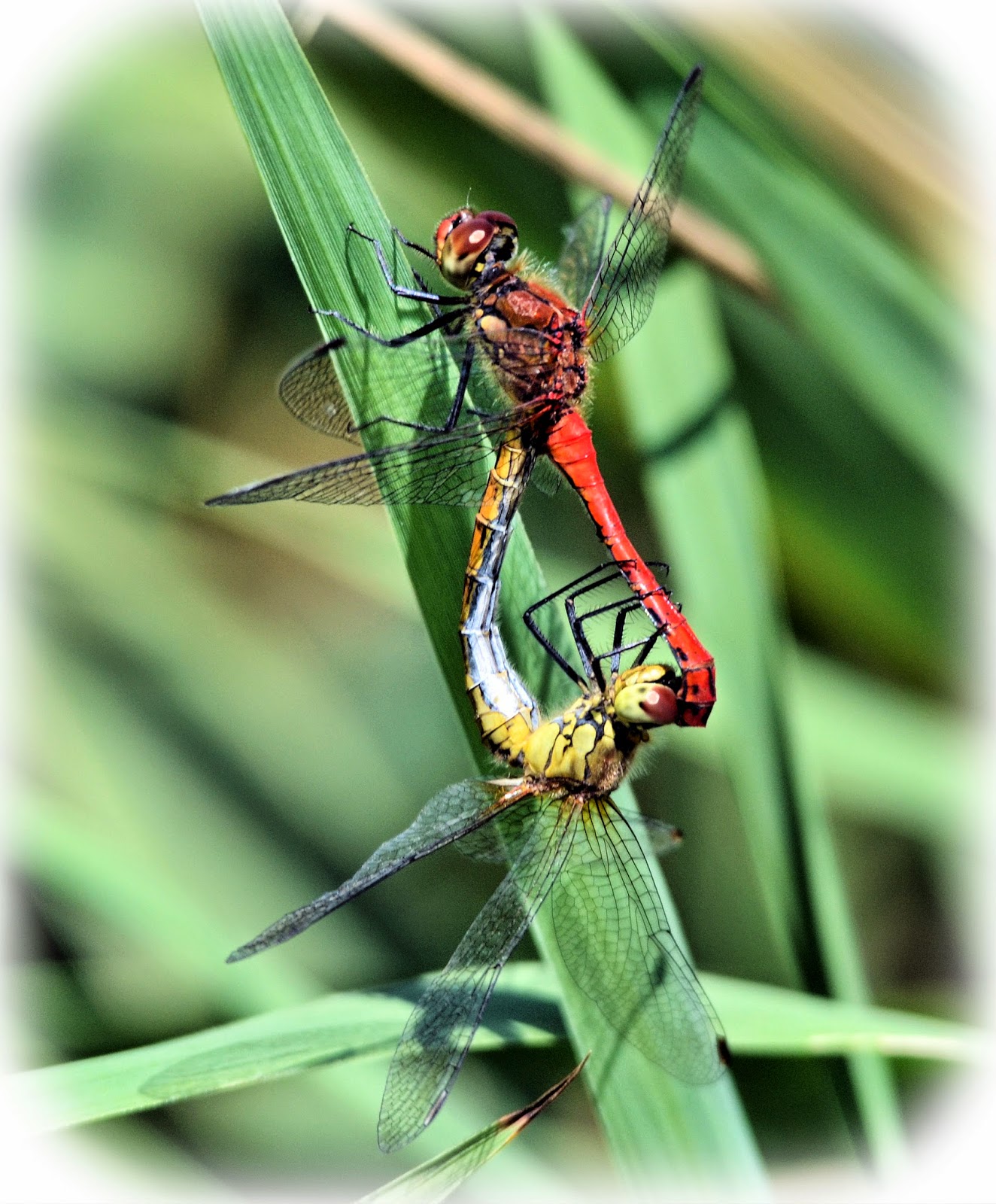 I originally identified this damsel as a Red Eyed Damselfly, but after further investigation, I now think this is probably a
Small Red-eyed Damselfly. 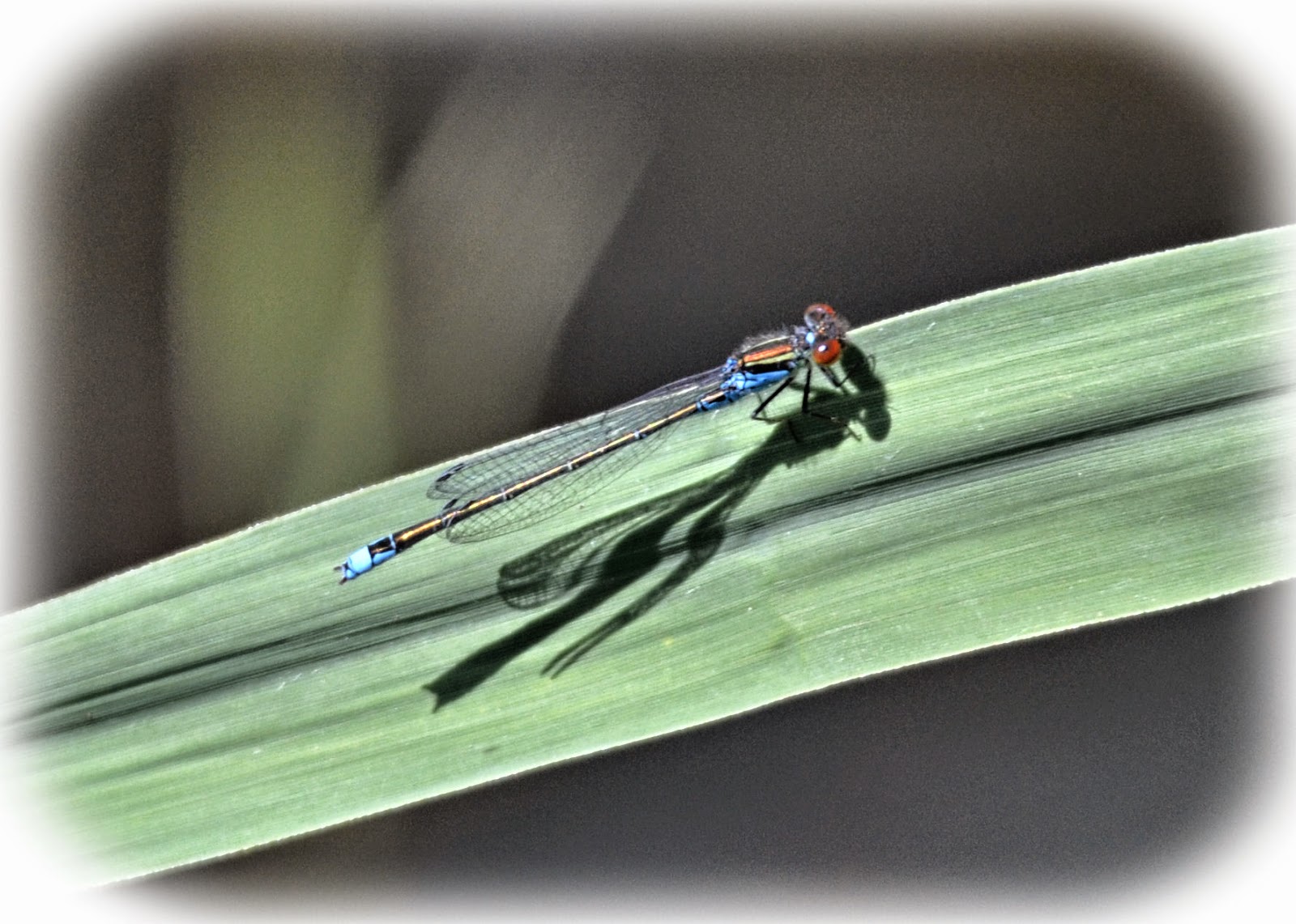 This one appears to have shoulder stripes, the wings just about reach S7, there is a coenagrion like spur on the side of the thorax, there is also the blue wedge shape on the side of S8, they have also been reported at Rainham recently, I might be wrong,
I need to compare against a confirmed red eyed damselfly.


I quite liked this image of the Red-eyed Damselflies flying in Tandem, with the Male looking like a mini helicopter. 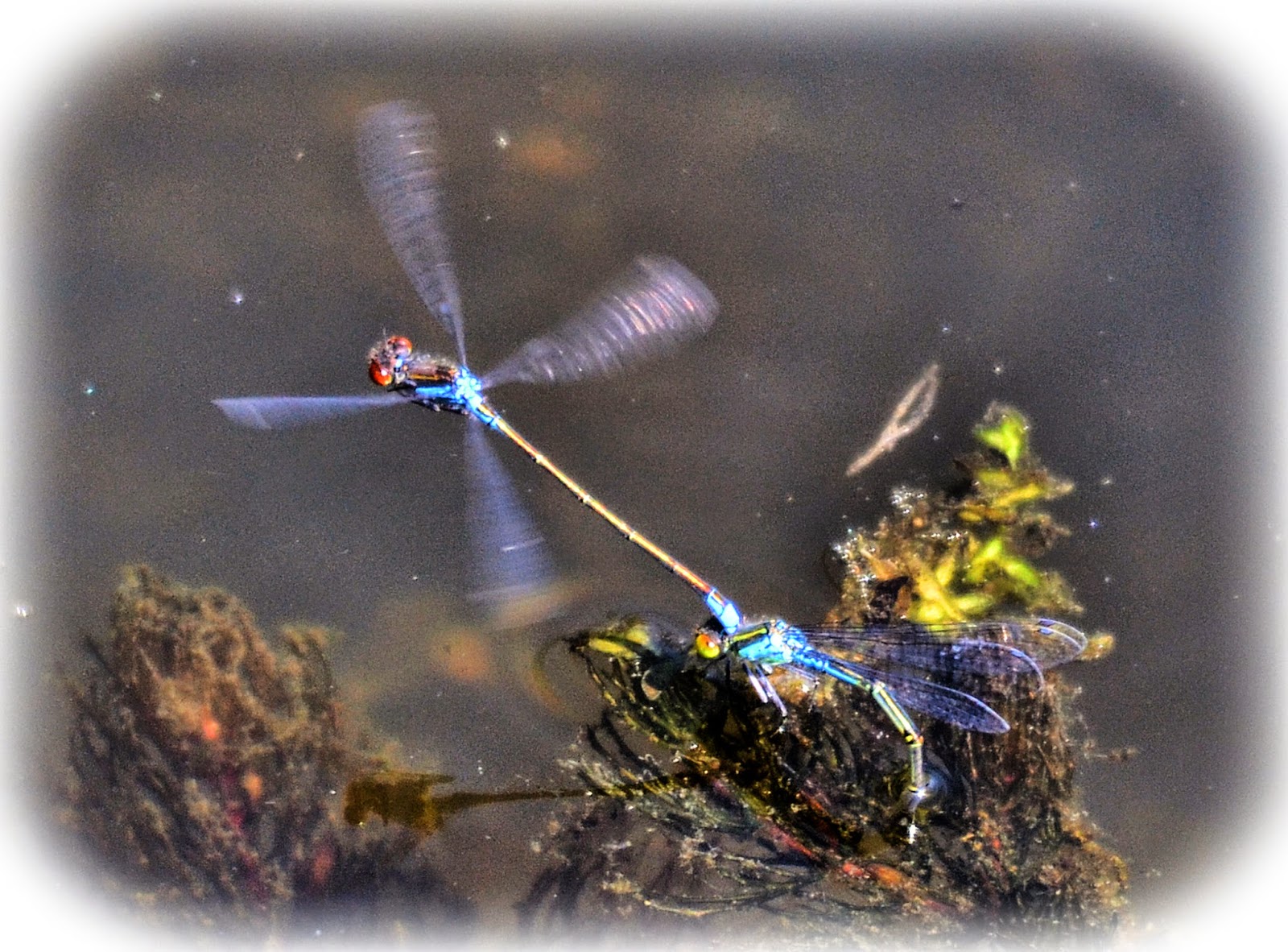 My list of Dragonfly species has now reached eighteen for this year.

Rainham RSPB, always a good place for Odonata sightings.
Posted by Merlin52 at 17:34 No comments: