As I walked down the trail from the visitor center at Rainham RSPB, and out towards the woodlands, there was a noticeable change in the air, it was as if the marshlands were wakening from there long winter sleep, the Goat Willow catkins were in full bloom, Buff Tailed Bumblebees and Honey Bees were busy collecting pollen and nectar, the high number of Bees around them demonstrating there importance as an early food source, 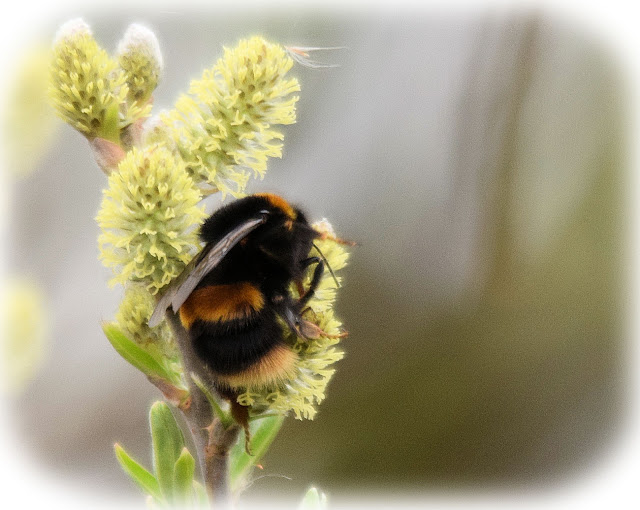 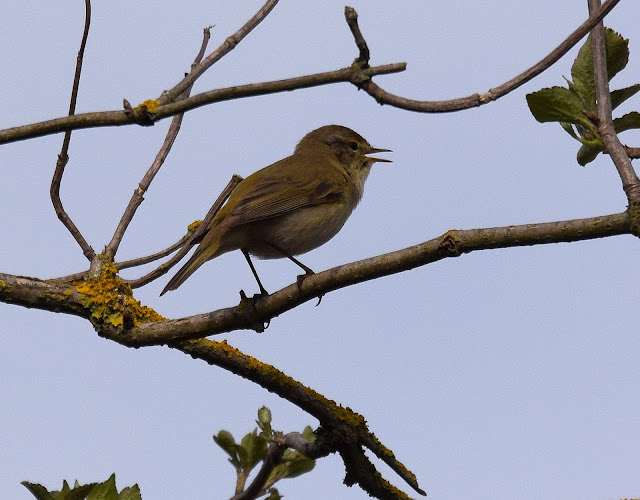 The Woodland feeding station was quiet with just the now usual  Brown Rats feeding on the spilt grain.

Found myself duck watching again at the Shooting Butts Hide, this time it was the Pochard that caught my eye, and for a change they were quite active, a group of five drakes had cornered two females in the reed fringes, the interesting part was the courtship display, something I have not witnessed with this species, the drakes approaching the females, lowering there neck and head flat to the water surface and then quickly swim away, 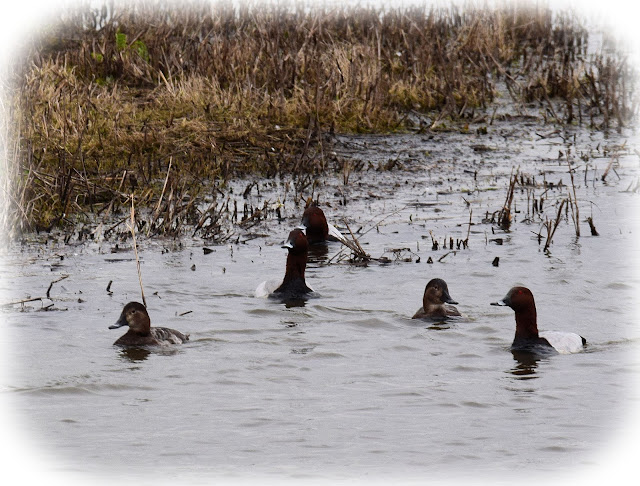 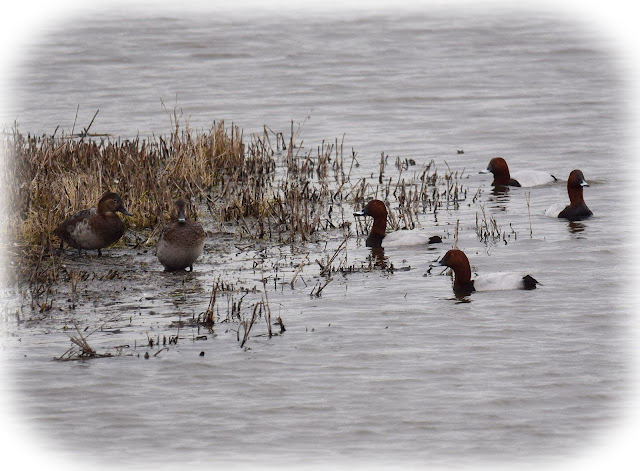 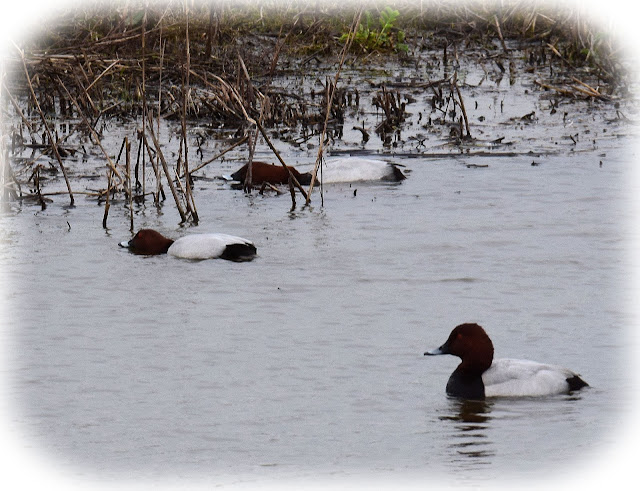 It was soon after watching the Pochard courtship that I saw a small plover working its way around the muddy fringes of the islands in front of the hide , a quick look and I mentally identified it as a Ringed plover, a closer look revealed a lovely Little Ringed Plover, my second spring migrant of the day.

Other birds noted around the marshes included  Reed Bunting, GreyLag and Canada Geese, Wigeon, Teal, Mallard, Little Grebe, Coot, Moorhen, Lapwing , Redshank, Shoveller no sign of any Pintail this time, A Little Egret did a flyby.

The only Butterfly seen was a Small Tortoiseshell. 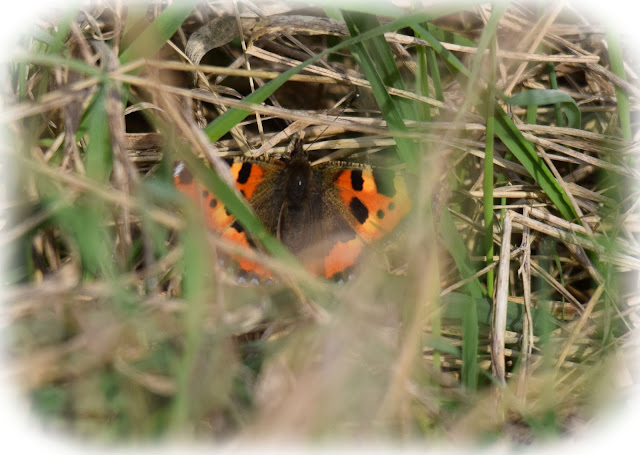 A few Marsh Frogs beginning to show, but none heard calling.

A hunting male Kestrel tempted me in trying to get a photograph but remained distant.

Interesting couple of hours with a good variety of wildlife sightings.
Posted by Merlin52 at 17:00 1 comment:

With temperatures warming up I couldn't resist dusting off my newly acquired Skinner's moth trap and lighting up the garden in the hope of a moth or two coming my way.

I am relatively new to this game, I made a few attempts at the end of last autumn, catching a few moths, most of which were difficult to identify, but its quite exciting, setting up the garden trap early evening, the anticipation of a trap full of moths in the early morning, the excitement of a new species appearing in the garden.

And then theirs the reality, the empty egg boxes, the egg boxes that the moths are supposed to take up residence in the early morning light.

As you can guess, the moths appear to be avoiding my trap, and last nights catch was no different. A grand total of two moths, both of which were Hebrew Characters, but two are better than none.


But at least I managed to identify them with some certainty, or have I, there appears to be two very similar looking moths the 'Hebrew Character' and the 'Setaceous Hebrew Character' both fairly common species of the same family which readily come to light. 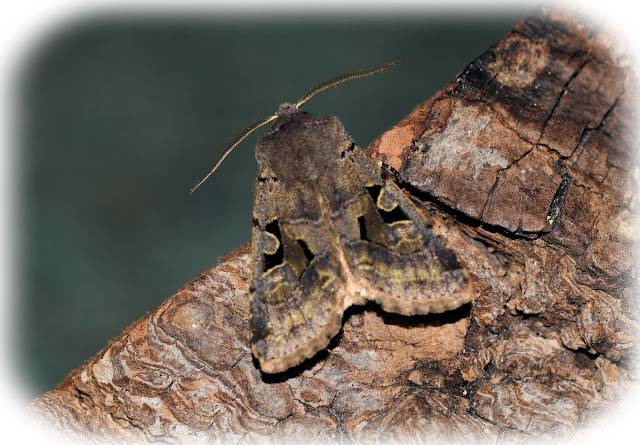 The Setaceous also has a very similar mark on its wing although some references say that there is a slight difference in the shape, time will tell if I can actually differentiate between them when the time comes.

On the plus side these do sit still for longer making it easier to photograph than there day flying cousins, although I am still struggling with 'depth of field' aspect of the photography side of things. 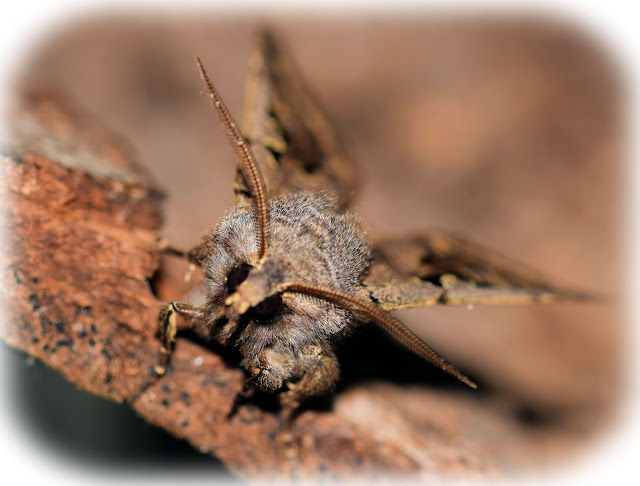 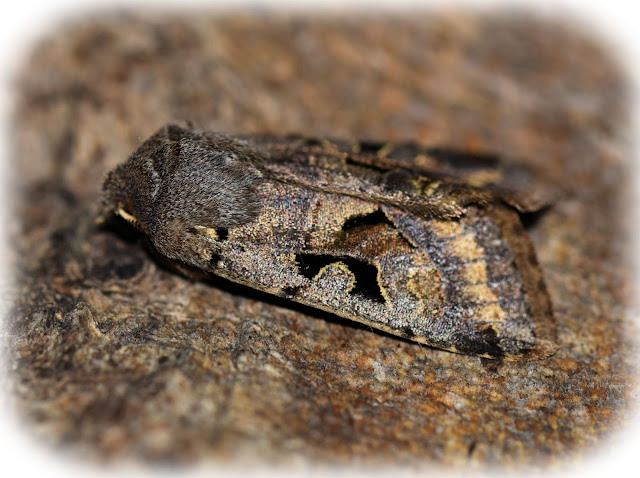 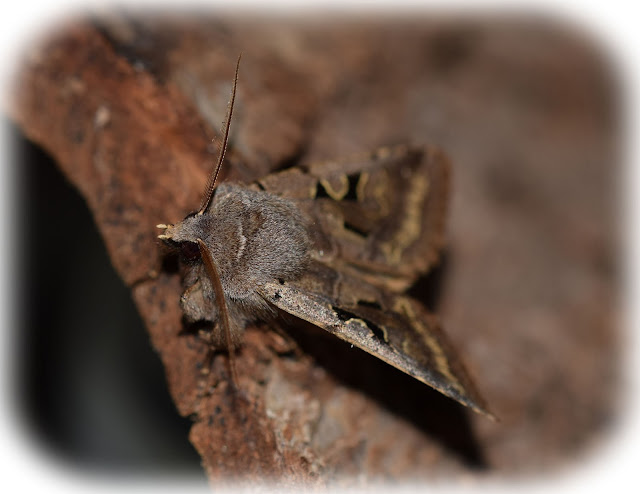 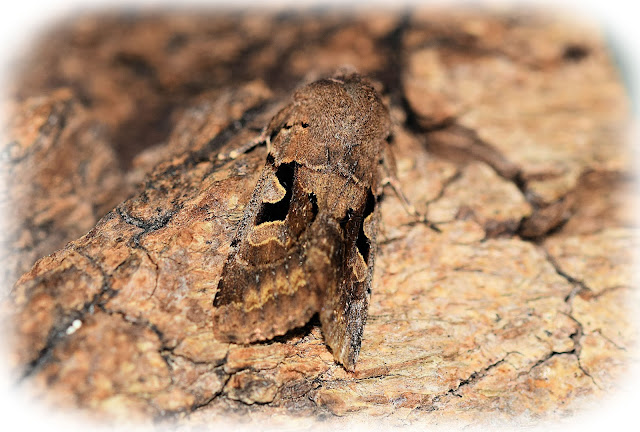 So 2017 is off to a start of sorts, with my first Moth, it can only get better, hopefully.


After a successful search and meeting with a potential dog minder for some future holidays, we found ourselves in Westerham, Kent. and not far from the historic home of Winston Churchill at Chartwell.

Our dog was looking tense, A leisurely walk around the grounds of Chartwell, taking in the ornamental lakes and woodland trails would soon alleviate his tension we felt.

Not sure he's entirely relaxed about the new arrangements, we were happy, he was apprehensive. I'm sure he can sense a looming separation on the horizon.

But back to the real world, as we approached the lakes I could see some waterfowl on the water,  a small flock of noisy Greylags, an aggressive Black Swan not happy with the Greylags presence, a couple of Moorhen, a pair of Tufted Ducks and some white domestic ducks.

The quick perusal  did not look promising, but what was I expecting on an ornamental lake in the grounds of a country house.

Certainly not the fine looking drake Goosander swimming purposely along the far edge of the lake. it did not look like a captive bird, very wary of my presence, keeping plenty of distance between us. 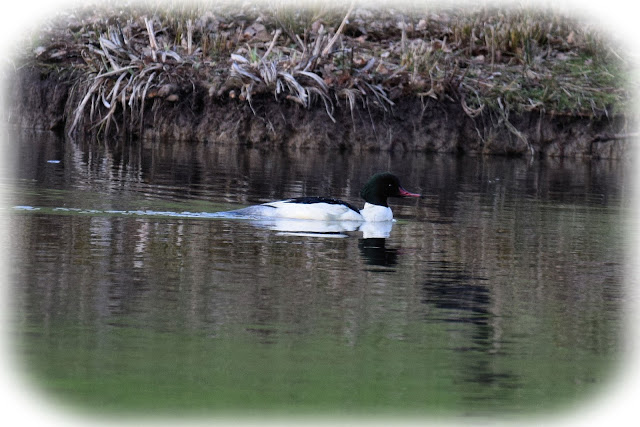 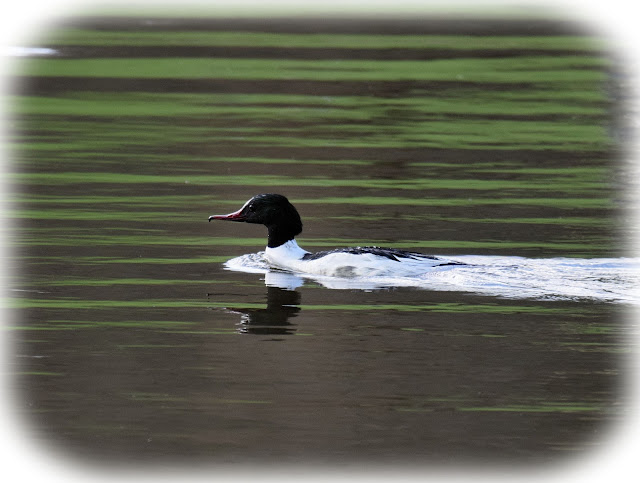 Now I do not see that many Sawbills, the occasional Red Breasted Mergansers on the Swale, a scarce winter sighting of a Smew or Goosander at Dungeness. So this was an unexpected treat on a relatively small inland lake.

The Goosander swam up and down the lake, occasionally diving and appeared to be feeding well. and looked in good condition. Here's a few photographs of the Sawbill looking down into the water before diving and feeding. 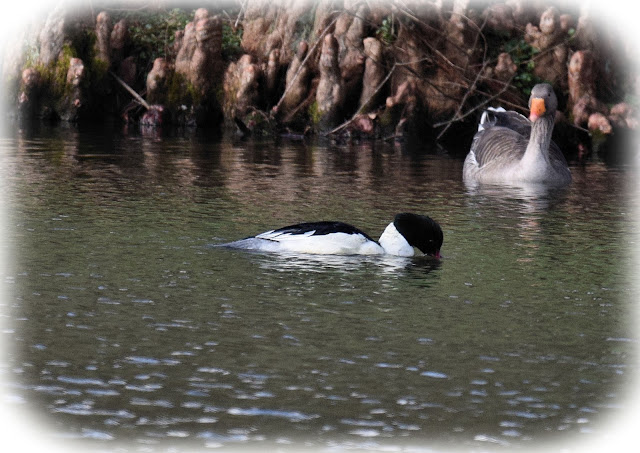 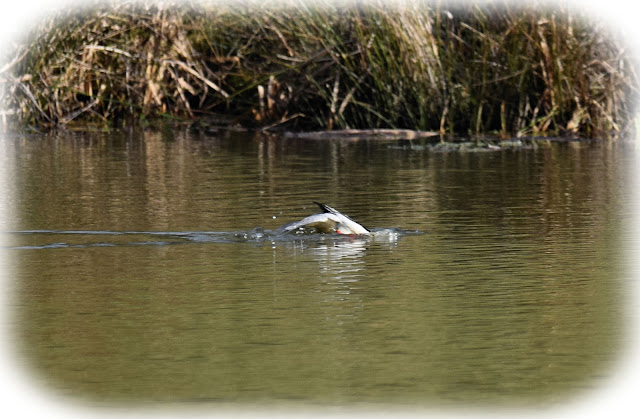 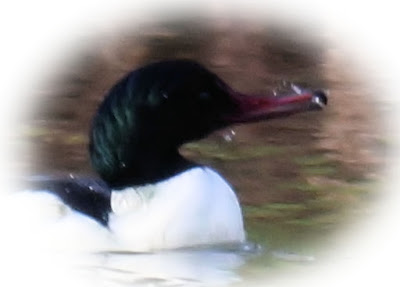 Maybe this was just a feeding stop-over, it wasn't long before it flew down the length of the lake, fittingly over the statue of Winston and his wife, disappearing over the treetops. 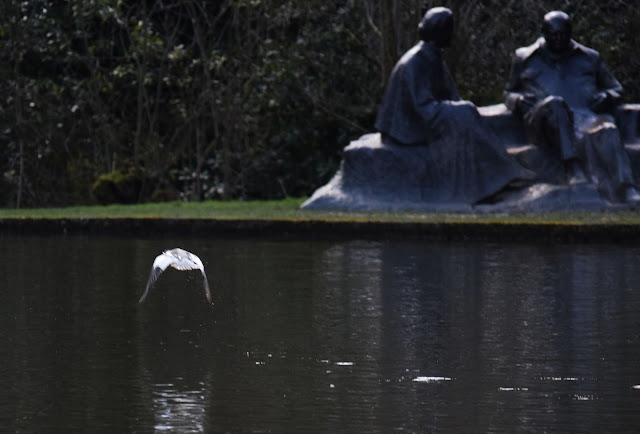 I always think that the Pintail is a bit of a 'classy' looking duck, as far as ducks go. The silver grey, white and chocolate brown coloration is quite distinctive, and the long graceful neck will always bring an admiring comment from someone in the hide. 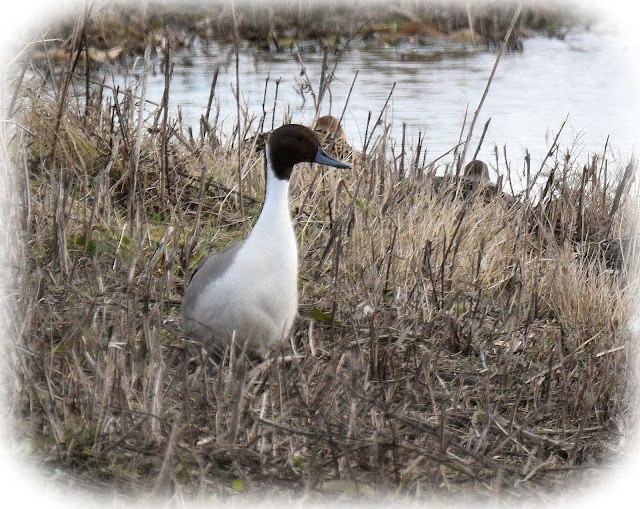 The Pintails we see here on the Marshlands of Southern England have migrated down from Northern Europe, usally only here for the winter months before returning home to their breeding range. 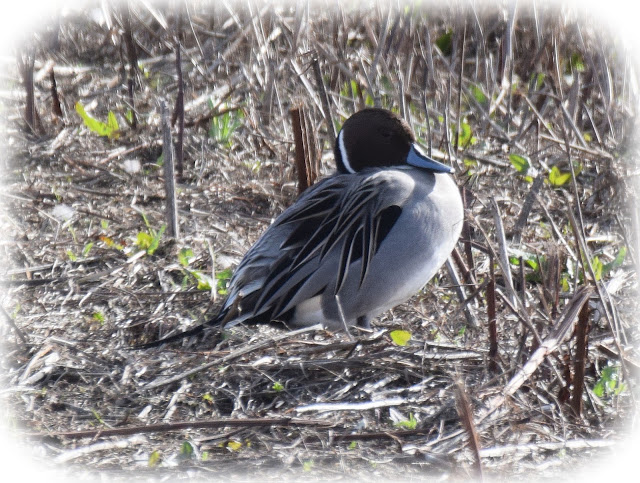 Quite an unassuming sort of duck which seems to spend a lot of its time at rest or sleeping when seen out on the marshes, but when you consider that its a bit of a dabbler, feeding on aquatic plants, seeds, mollusca, insects, crustaceans and small fish. usally in the early evening or night.

That explains why they are usally seen at rest during the day. ( Tired)

I have never seen these Pintail in large flocks, unfortunately, most of my sightings have been  small groups scattered around the marshes. typically as shown below 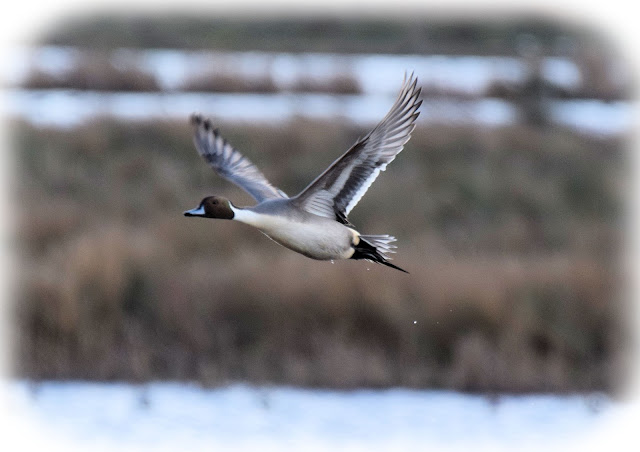 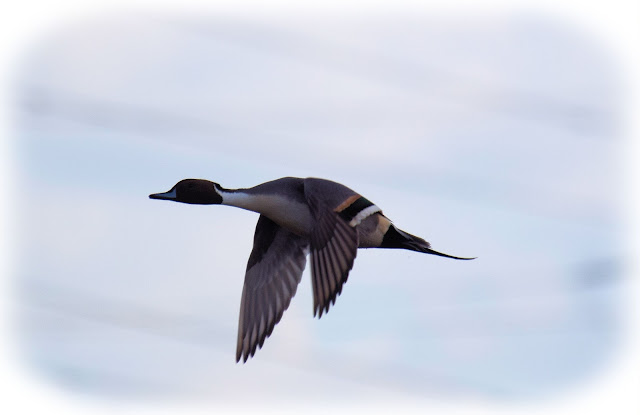 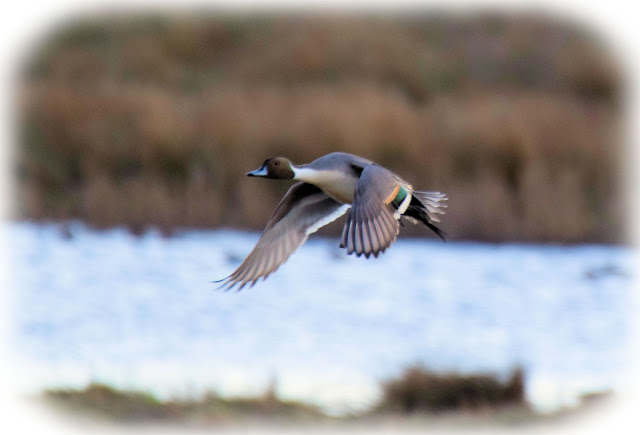 Saw this one on the water's edge engrossed in a bit of 'dabbling',
and bucking the 'evening feeder' theory 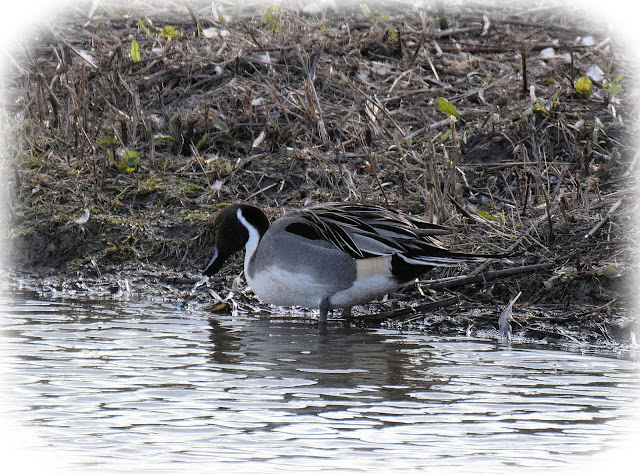 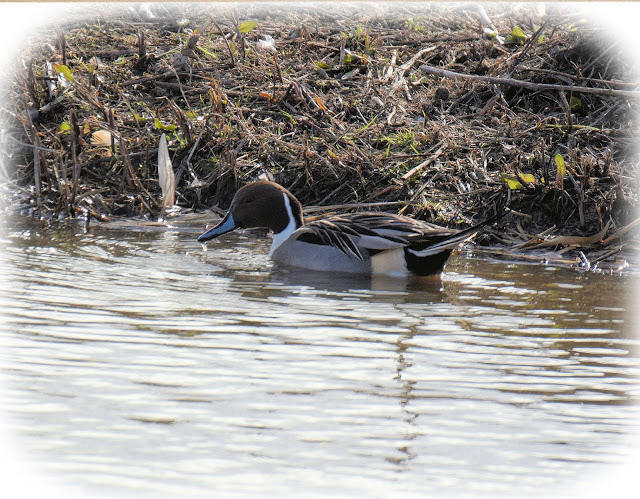 You have to admit, a smart looking winter duck.