Spider in the house !

To be more precise, its a spider or two under the conservatory roof, throughout the long summer months I have watched the spiders spin their webs along the eaves of the conservatory, happy to leave them to do their best at removing unwanted flies and such, that have made their way into the house.

One in particular, that lives in a crack at the corner of the roof has grown to a fair size, probably a female, also very wary as she scurries back to her lair at speed as soon as she detects my presence.

I've noticed that during a particularly heavy rainstorm, the raindrops hitting the glass roof tends to bring out the spiders from their hiding places. on this occasion I thought I would try and get a photograph and identify the large female that keeps catching my eye. 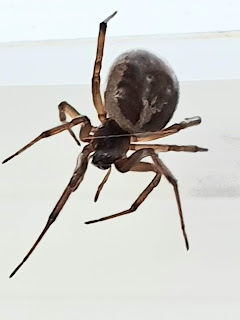 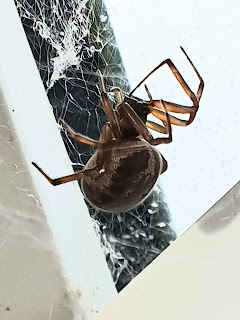 And here she is, presuming she is a "she" ,  I suspected this might be one of those False Widow spiders that keep making the news, a look through my Spider field book at the possibilities narrowed it down to the  Steatoda nobilis  or Noble False Widow, later confirmed by the UK spiders on Facebook.

I was particularly pleased with this find having never seen one before, a bit of research revealed that the females are much larger than the males and can reach a size of 2 to 3 cm which is very close to the size of ours. ( I,m taking this measurement covering the spread of her legs) so a female she is. The males being much smaller.
The pale marking around the front of the body is another indicator of Noble False Widow , its also said that the marking on the body sometimes resembles a skull, not on this one though.

A few more images of the female. 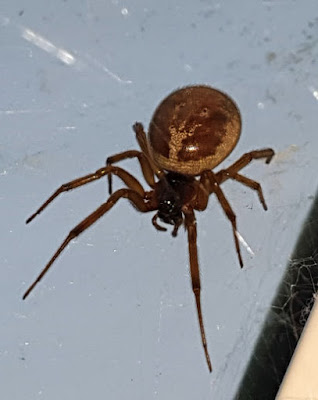 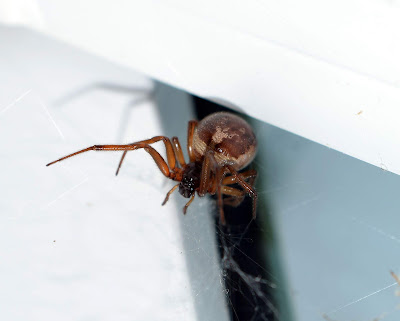 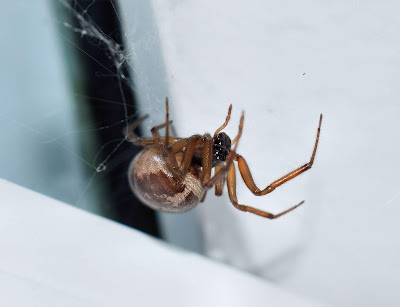 As I mentioned before several other smaller spiders also living around the conservatory roof but much smaller and looking at the markings on the body are also Noble False Widows probably males. 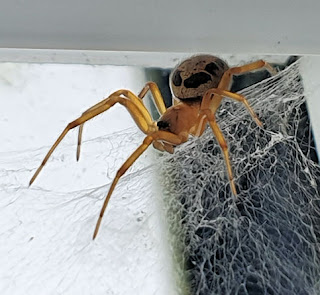 I was initially a bit wary of  these spiders considering the scare stories that newspapers have reported in the past but it seems to be that there bite is no worse than a Bee sting,  and they scurry away as soon as they detect your presence so for the moment there safe to lead there short lives in peace, as long as they stay out of harms way.

Here's another spider taken up residence outside the house, the common garden or White Cross Spider. nothing to worry about with this one, unless you're a Mayfly !